Last summer, we went on a family road trip to Northern California. With one of our stops being San Francisco, there was no way this Disney-loving family was going to miss the Walt Disney Family Museum. With two of our travelers being younger than six, I was a little concerned about going into any museum, but I was pleasantly surprised by everything this museum had to offer for Disney fans of all ages.

We planned to spend the morning at the Walt Disney Family Museum (my brother had been there previously and said that we could do the galleries in a couple of hours), so we arrived shortly after it opened. After you get your ticket, you walk through the lobby filled with Walt's awards. I was in awe of the Snow White and the Seven Dwarfs Academy Awards that he received. I took several pictures of the full-size Oscar and the seven"dwarf-size" statues. My oldest son had no idea what my fascination with these "trophies" was, but he obliged and took a picture with them for me. Maybe someday he will appreciate it. 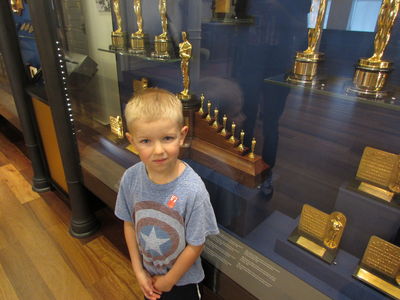 Although he didn't understand the significance, my son posed with the Snow White and the Seven Dwarfs Oscars. Photo by Lisa Maulhardt, used courtesy of the Walt Disney Family Museum.

We went into the first gallery and my apprehension about taking kids into a museum began. I like to look at things and read what interests me. My husband likes to read everything; the kids wouldn't be reading anything. How would we manage to entertain them so we could all enjoy it? Turns out, we didn't need to worry. In the first part of the gallery, you see where Walt Disney came from: his family history, where he was raised, and what his family life was like. In the first room, there were screens with videos that the boys were willing to watch while we looked around. Occasionally, there were things we found or read and called the boys over to show them. The same went for the second room, where there were videos of some of Walt's earliest cartoons. 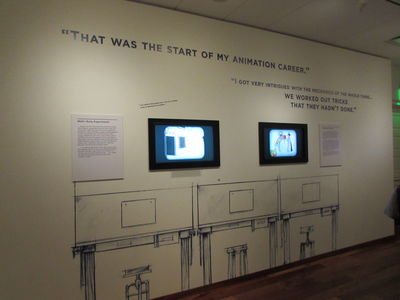 Videos keep the kids entertained while the adults look around the galleries. Photo by Lisa Maulhardt, used courtesy of the Walt Disney Family Museum.

Once you get through the first couple of exhibits (which display Walt's life prior to his trip out West), you enter an elevator to the second floor. But, this is no ordinary elevator. It is designed to look like a train, which also makes train noises. While you go upstairs, you feel like you are sitting right next to Mr. Disney on his way out to California. To us adults, it was cool. To the kids, who also love trains, it was awesome.

The second-floor galleries were even more exciting than the first. This is where you can see just how brilliant Walt Disney really was. From short cartoons and mixed-media shorts (like the Alice comedies) to full-length animated features, he was always looking to do something that no one had ever done before. I was in Disney-fan heaven. I could stare all day at the first-known drawings of Mickey Mouse. Oh wait, where are my kids?

Luckily, there was something for them to do or watch in almost every room. There were things they could touch, listen to, or even play. One of their favorite things to do was playing sound effects. There was a station that had "instruments" and a video explaining how animators made the sound effects and music for the cartoons. Then it gives you a chance to see if you can match the sounds to the cartoon. After a couple of run-throughs, I had to pull all three of my boys, my husband included, from the display. 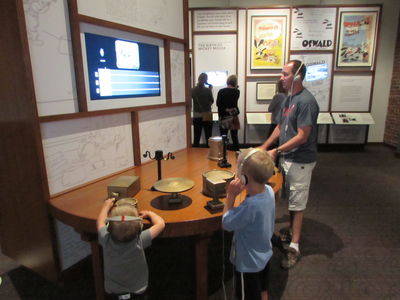 All three of my boys, including my husband, enjoy the hands-on displays. Photo by Lisa Maulhardt, used courtesy of the Walt Disney Family Museum.

As we went on, things became more familiar to my Disneyland Annual Passholder kids. They recognized the pictures of Walt riding his trains in his backyard and enjoyed seeing the Lilly Belle from his personal railroad. They also enjoyed looking at the model of Disneyland, although my oldest could see some of the differences from the park model to the park he is familiar with today. 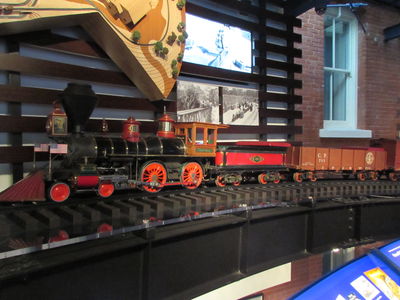 Toward the end of the exhibition, which also corresponds with the end of Walt Disney's life, the kids were starting to get hungry and bored. They had already spent a couple of happy hours going through the museum, and I knew when not to push it with them. It was probably a good thing that they were eager to leave by then, because I am not sure I could have read anymore about Walt's death. Choking back tears, we finished our walkthrough.

At the end of the galleries, there was a small café where we got sandwiches. The museum is located in the Presidio area of San Francisco, right across the street from a huge grassy field, which is great to let kids run and blow off some energy.

Overall, I was impressed with how many things the museum had to keep young kids engaged. Not only did they have things for them to watch and see, but there were things for them to do. And anyone with young kids, especially boys, can understand the apprehension about taking kids to a "grown-up" museum. I was expecting to have to say "Don't touch that" or "Shhh, be quiet," but I didn't have to worry about any of it. There were plenty of things for them to do while we walked through and saw what we wanted to see. 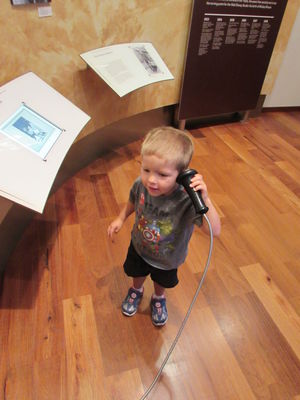 With so many things they could see and touch, the boys happily spent a couple of hours in the museum. Photo by Lisa Maulhardt, used courtesy of the Walt Disney Family Museum.

This museum is a must-see for any Disney fan. And now that I have been there with kids, I can say that it is certainly kid-friendly. I know that a lot of the content was not of interest to my 5- and 3-year-old boys, but there was enough to keep them busy while we adults enjoyed our time there.