Simulators and the Star Wars Experience

Once Upon a Simulator

Once there was Mission to Mars, with the cooperation of NASA itself, an attraction that used video screens and large-area seating to simulate a rocket launch from Earth and a journey to Mars. While not the first ride to incorporate physical simulated effects, Mission to Mars was a fairly early and long-standing attraction in Disney parks and is still remembered to this day. It was originally called "Rocket to the Moon" and welcomed would-be space travellers when Disneyland itself opened its gates in 1955.

In 1967 it was renamed to "Flight to the Moon," and finally in 1975, after astronauts of NASA had actually been to the real moon and back several times, it was rethemed and retitled "Mission to Mars." Mars was seen as the next logical step in space travel even in the mid-'70s. Mission to Mars took guests, including a child-version of myself, on its journey in Walt Disney World as well. The rumble of the seats as the rockets take-off amazed me then; it gave me an idea of just how loud and powerful such a launch would be. It simulated the experience.

While Mission to Mars is no longer part of Disney parks, the Imagineers knew that such an experience, where guests sit in some form of motion-controlled seating in front of a large viewing screen, could be enhanced for an even better simulation of real events. CircleVision 360 (and its subsequent derivations) played with this idea by having numerous large screens surround an audience where scenes such as riding down a street gave the guests feelings of motion even while they stood on the floor of the round theater. There was often a gasp, a collective intake of air, whenever a scene included flying over a cliff. The simulation attraction was evolving.

In Epcot, Body Wars employed some of the ideas from the 1987 movie Innerspace to miniaturize guests for a journey into and through a human body. Guests would now sit in a special craft that would tilt and turn in conjunction with the movement and action on the screen. The effect would be more powerful on riders, as they not only saw the forward projection on the screen, but they would also feel the twists and stops as the ride vehicle tried to simulate what the experience would feel like. That experience of traveling through the vessels of a human circulatory system was a very abstract idea and, at least to me, that made the motions of the vehicle and the ride overall feel a bit unauthentic. The attraction officially closed in 2007.

Star Tours took the same ride mechanisms and setup as Body Wars and used a decidedly less-abstract setting by adding a Star Wars theme to the experience. This updated ride simulated the thrust of lightspeed, the crashing into a comet, and the speed of X-Wings on their attack run of the Death Star's trench. It was an improvement and has been a more lasting success by traveling through space and fighting TIE Fighters instead of traveling through blood streams and fighting white blood cells (which I never could accept as an "enemy").

With Star Tours: The Adventures Continue, the effect has been enhanced with a variety of new visuals as well as 3D effects by wearing polarized "flight glasses." Even with these changes, the basic principles of the simulator remain much the same as they did many years ago with Mission to Mars.

Most of us are familiar with perhaps one of the greatest examples of the modern simulator with Soarin'. It still has a large screen and it still has guests in controlled-seating that moves with the actions on the screen. It seems, however, like so much more than just that because it is such an awesome ride, really. But it is still by definition, a simulator, just on a grander scale and with visuals that are easier to relate to as humans on Earth but are harder to simulate convincingly.

Yet another simulator takes the ideas in a different direction with the spiritual-successor to Mission to Mars, with Mission: Space in Epcot, which incidentally, takes guests to Mars. It incorporates a centrifuge to simulate the feeling of lift-off to almost sickening levels of realism—which is why NASA astronauts train on them. Once again, NASA plays a role in Disney attractions and that is a fitting idea especially with Walt Disney's fascination with progress and the future. This kind of realism comes with a bunch of warnings to people prone to motion sickness (like myself) and those with health issues like heart disease or high blood pressure. Not everyone can even go on this ride. This is the probably the summit of what technology can do in this kind of simulation. 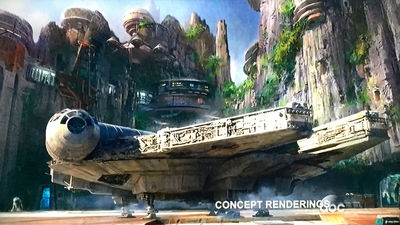 One already announced ride is based on the Millennium Falcon. Artwork © ABC/Disney.

Haven't we had enough simulators?

Now with the Star Wars Experience on the horizon—oh, wait! I forgot to mention one of my all-time favorite simulator experiences. The attraction, Horizons, in Epcot featured a scene with one of its colossal Omnimax screens that took the riders through a strand of DNA and as it twirled through the double-helix the feeling of rotation was truly intoxicating. My friends and I would ride Horizons over and over again just to catch that scene.

Even though I was hoping for something completely new, I will simply have to reserve judgement until we know more details about the Millennium Falcon ride, and by extension, The Star Wars Experience overall. The TV special answered few if any questions and only spurred tons more questions about this new land. 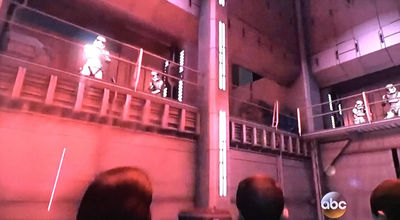 To some viewers, this concept art from the second Star Wars Land attraction evoked the Transformers ride from Universal Studios. Artwork © ABC/Disney.

There is another ... attraction

The second ride teased in the Disneyland special looks to be a possible hybrid of a moving dark ride and a simulator. It seems as though you will ride in an Omnimover-type vehicle, like those in Haunted Mansion (the Doombuggy), and come upon interactive scenes—that look to be projected onto walls—finding yourself in the middle of a battle with Stormtroopers and Resistance fighters from which you're trying to escape.

It's been pointed out elsewhere that this type of attraction has been done at Universal parks. But Disney could be adding to the idea of this hybrid ride and making it more uniquely theirs, right? Part of me wishes this was much more of a traditional dark ride with animatronics and real sets with practical effects echoing the spirit of The Force Awakens and its tactile/analog approach to the visuals that made it realistic. The other part of me sees advantages to the projected screen approach—the obvious of which being that the show can be more easily changed or updated in the future to offer new experiences and offer them more often with less need for refurbishment downtime.

You can just drop in new scenes from the latest movie, or go retro and create a new experience from the original trilogy, or give it a Halloween theme where everyone is dressed like Kylo Ren when the real Kylo Ren freezes them all to steal their treats. Whatever this ride will end up being, it needs to be big, it needs to be fantastic—it needs Disney magic. Maybe it will engage with newer technology like the trackless ride system in "Remy's Totally Zany Adventure" in Disneyland Paris. Maybe because of the sheer size of this show's building, there will be actual real sets and animatronics mixed with 3D elements to interact with. Finally, with so little to go on at this point, I'll just continue waiting for that magic to hit. I have higher hopes for this one than with the Millennium Falcon's simulator roots.

Rumors are that Disney is blitzing this build 24/7 and the Star Wars Experience could be here as early as the end of 2017 (around the time of Episode VIII's release). We may not have to speculate or wait too long. Until then, Disney is not slowing down anything Star Wars as coming soon is the home release of The Force Awakens (first week of April), the continuing merchandise, the fireworks at Disney parks, Rogue One coming to theaters this December, the continuation of Star Wars Rebels TV show, and then more movies and more stuff and more. It's a stimulating time to be a Star Wars fan (I almost wrote "simulated").