The new Rivers of Light nighttime spectacular will open on Earth Day, Friday April 22, Disney has announced. The company also shared a new video about the show, which will be hosted in a new amphitheater along Discovery River in Disney's Animal Kingdom Park.

Reserved viewing for Rivers of Light will be offered through the Fastpass+ system, though Disney hasn't yet said when the booking window will open. We are also expecting additional information about Rivers of Light dining packages, which are expected to be offered at several Animal Kingdom locations including the new Tiffins Restaurant under construction near Avatar Land.

Early registration for annual passholders and Disney Vacation Club members will open on Tuesday, March 22 at Noon (EST). The passholder websites for Walt Disney World and Disneyland have both been updated with the new date, but the Disney Vacation Club website has no mention of this race at all. (As we've repeatedly recommended, if you are an annual passholder and a DVC member, it's always best to use the links from the annual passholder site to register for runDisney events. The DVC site is not updated as frequently, and the links are often posted after the events are already sold out.)

runDisney has not provided an explanation for this delay, saying only that they are "putting finishing touches" on the event, but an image being shared on social media provides a likely explanation. A runner found a listing on the Active.com website (the site runDisney uses for race registration) that included a 10K distance for the Wine and Dine event. This is the last of the runDisney events to add a 10K, so it's no surprise that Disney would add the popular distance to this event as well. What is not known is if this 10K will also be a nighttime race—the Wine and Dine is the only after-dark half marathon on the runDisney calendar—and whether Disney will add a Challenge division for those who want to run both races the same weekend.

While running events are always subject to weather challenges, the Wine & Dine Half Marathon seems to be the most notorious of the runDisney events. In 2014, the race was nicknamed the "Splash and Dash" race due to poor weather conditions. Thunderstorms and lightning in the area prompted runDisney to drastically shorten the course of the 2015 race following a delayed start, leaving runners to complete a "half, half marathon."

We expect runDisney to come out will all of the details—and pricing—for the 2016 event by March 15, though there's still not much that can be done about the weather. The race is currently scheduled for the evening of Saturday, November 7, with the Jingle Jungle 5K and runDisney Kids Races scheduled for that morning.

The delay has also forced runDisney to move the registration dates for the 2016 Avengers Half Marathon weekend at the Disneyland Resort. General registration for that event will now open on April 12, with early registration on April 5.

Contributing photographer Alan Dalinka shares some photos from around Walt Disney World, including images from the 2016 Epcot Flower & Garden Festival at Epcot. You can see even more photos from the event tomorrow in a photo tour by Don and Bonnie Fink. Alan also took to the skies above Disney Springs to bring us a unique look at the construction in the area. 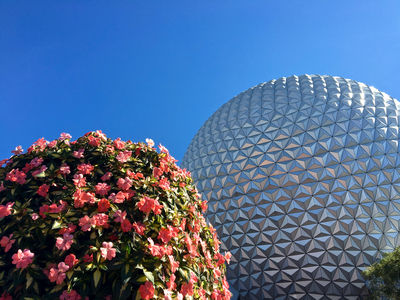 Flower towers are intermingled among the Leave a Legacy stones near Spaceship Earth. Photo by Alan S. Dalinka. 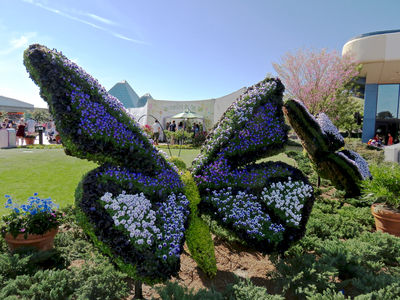 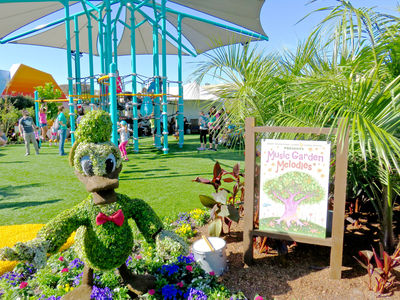 Music Garden Melodies, along the pathway between Future World west and World Showcase is one of the play areas set up for the Epcot International Flower and Garden Festival. Photo by Alan S. Dalinka. 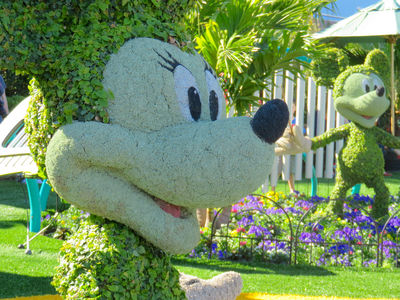 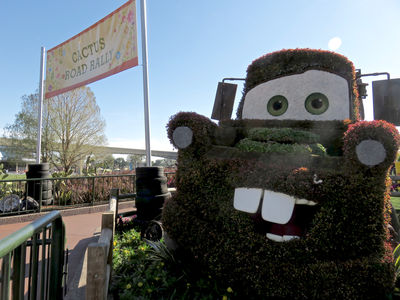 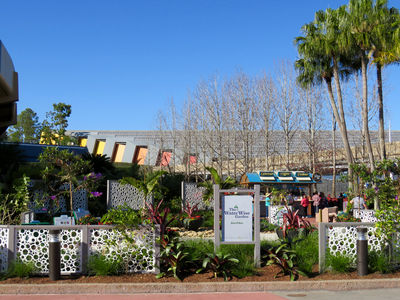 The area next to Innoventions East near Universe of Energy is again home to a Water Wise Garden for the Epcot International Flower and Garden Festival. Photo by Alan S. Dalinka. 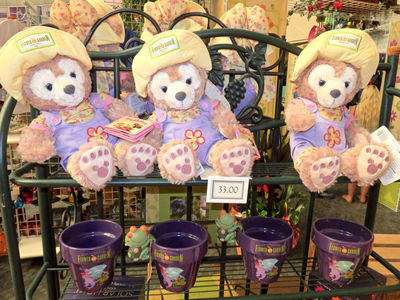 Duffy the Bear's friend Shellie Mae in a Flower and Garden Festival outfit is amongst this year's themed merchandise. Photo by Alan S. Dalinka. 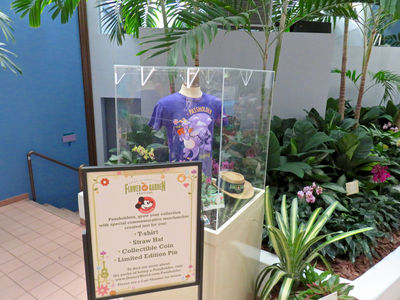 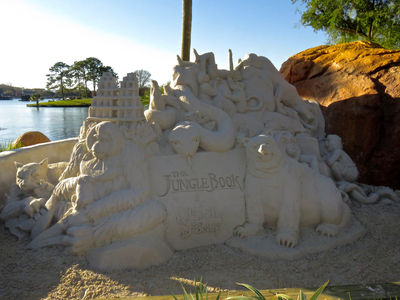 A sand sculpture advertisement for the upcoming live action version of The Jungle Book is along the shore of World Showcase Lagoon near the African Outpost. Photo by Alan S. Dalinka. 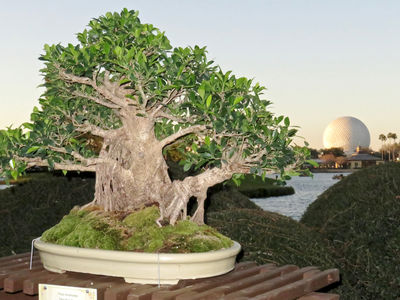 Bonsai trees are on display along the World Showcase Promenade in the Japan pavilion. Photo by Alan S. Dalinka. 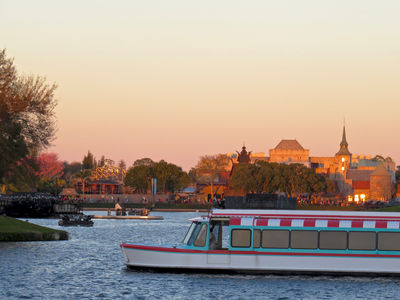 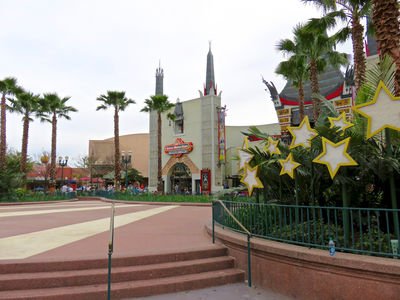 The technical equipment that supported the DJ-hosted dance parties at the Center Stage in front of the Chinese Theater has been removed. Photo by Alan S. Dalinka. 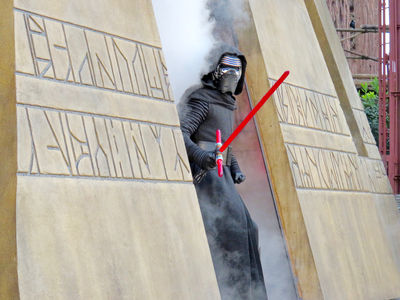 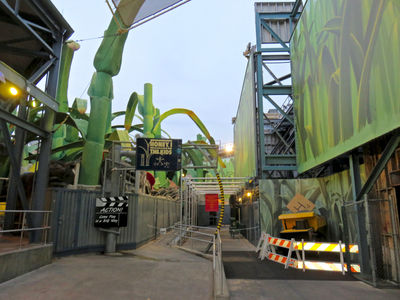 Honey, I Shrunk the Kids: Movie Set Adventure is scheduled to close on April 2 to make way for the Star Wars and Toy Story lands coming to Disney's Hollywood Studios. Photo by Alan S. Dalinka. 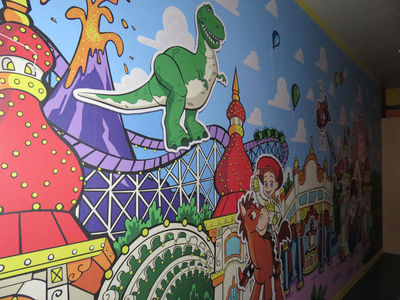 Inside the standby queue for Toy Story Mania, a mural wall now blocks off views of the animatronic Mr. Potatohead. Photo by Alan S. Dalinka. 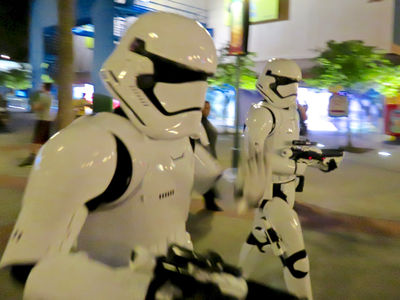 Storm Troopers of the First Order currently appear in the Animation Courtyard and will participate in a new mini-parade scheduled to begin in April at Disney's Hollywood Studios. Photo by Alan S. Dalinka. 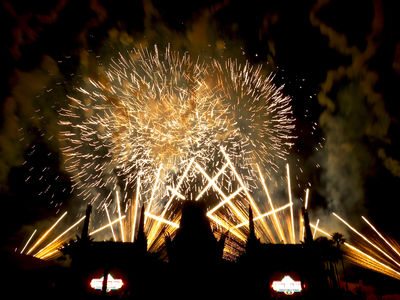 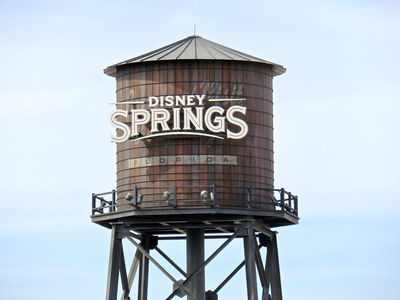 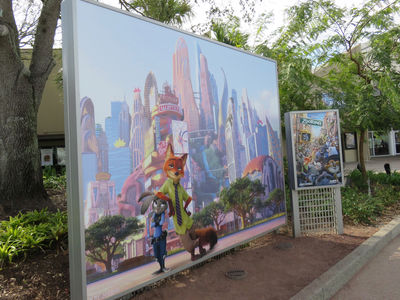 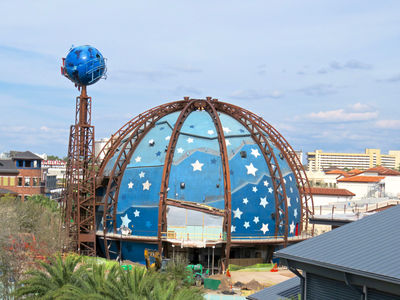 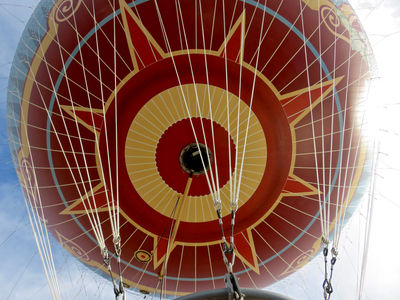 The Characters In Flight balloon at Disney Springs is helium-filled and is tethered to its base by a cable. Photo by Alan S. Dalinka. 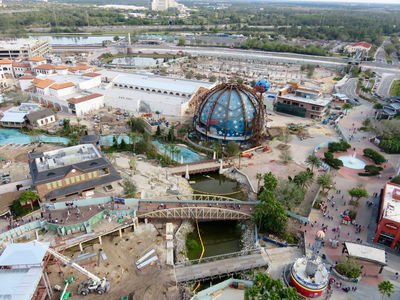 In this photo from the Characters In Flight Balloon, you can see the construction site for The Edison (former home of The Adventurers Club) and the STK Steakhouse Orlando in The Landing area, and the Town Center construction. Photo by Alan S. Dalinka. 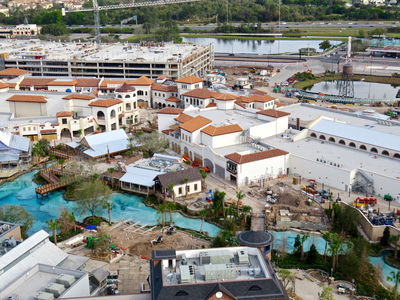 In this photo from the Characters In Flight Balloon, you can see the back of the new Disney Springs water tower that faces Buena Vista Drive and the construction of the Town Center area and the newest parking structure. Photo by Alan S. Dalinka. 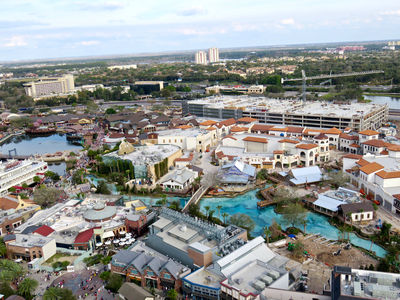 The blue colored water—the namesake "Springs"—seen in this photo from the Characters In Flight Balloon separates the Town Center and Landing areas of Disney Springs. Photo by Alan S. Dalinka. 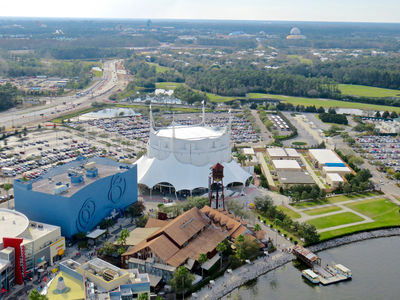 In this photo from the Characters In Flight Balloon, you can see beyond the West Side of Disney Springs to Spaceship Earth at Epcot and farther to the west. Photo by Alan S. Dalinka. 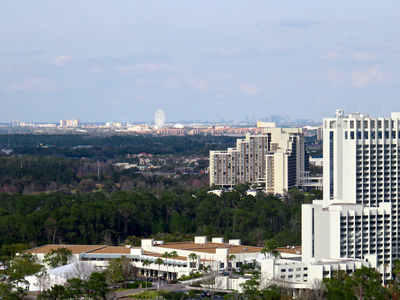 In this photo from the Characters In Flight Balloon, you can see beyond the on-property Buena Vista Palace Resort, to the Grand Cypress Resort all the way to the Orlando Eye and International Drive. Photo by Alan S. Dalinka.

Come join MouseAdventure for their first Spring game in Walt Disney World—MouseAdventure Silly Symphonies. This adventure will kick off at Sea Breeze Point, the gazebo on the edge of Crescent Lake near the Boardwalk resort. From here you will explore the nearby resorts and then continue into Epcot Park. We will wrap the day with an informal meet up back at the gazebo. Details will be announced on game morning.

So, get the band together and get ready for MouseAdventure Silly Symphonies! Registration for this event will open at 9am Pacific Time on Tuesday, March 15 online at www.mouseadventure.com.

MouseAdventure Silly Symphonies will take place on May 14 at Epcot.

MouseAdventure Silly Symphonies will put you through a series of quests and challenges to be solved throughout the Epcot Resorts and Epcot Park.

Registration for the Basic Division is $150 per team. Each player will need admission to Epcot Park on Saturday, May 14. MouseAdventure registration does not include theme park admission.

...A casting notice was posted for performers to portray the Coca-Cola Polar Bear at the new store under construction in Disney Springs. Auditions are being held this week. The job listing says the position begins in early March, so the store may be closer to opening than expected. 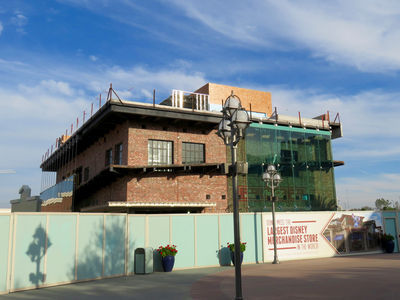 The recently confirmed Coca-Cola Store's brick exterior is being covered in floor to ceiling glass area that appears to be creating an enclosed set of ramps to the upper level. Photo by Alan S. Dalinka. 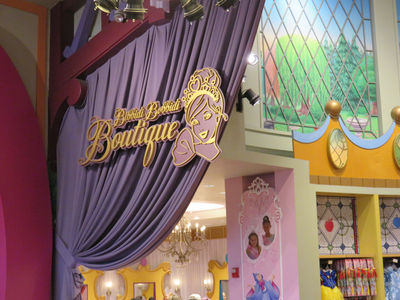 The Boutique will be moving out of the World of Disney Store into an as yet unannounced location in Disney Springs. Photo by Alan S. Dalinka.

...Walt Disney World annual passholders can collect three different "Fresh Artwork" prints during the 2016 Flower and Garden Festival. The 8" x 10" prints were drawn by Disney artist Don "Ducky" Williams, and change each month. The characters are:

The redemption center is located behind Club Cool, inside Innoventions West. There is a limit of one print per passholder, per month. 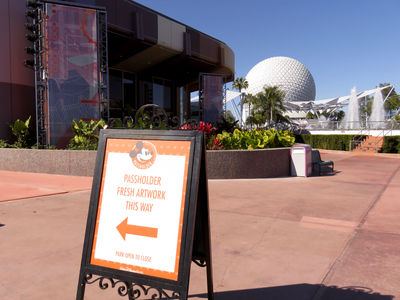 Annual Passholders can pickup their "Fresh Artwork" by showing their Photo ID and having their Magic Band or Annual Pass scanned. Photo by Alan S. Dalinka.

...Nick Wilde and Officer Judy Hopps from the Disney animated feature Zootopia will join the "Move It! Shake It! Dance & Play It! Street Party" at the Magic Kingdom sometime this spring. The duo are scheduled to appear in a meet-and-greet at the Disneyland Resort, but for now this is their only East coast appearance.

...Walt Disney World has lifted the Spring Break blockout window previously in effect for the Florida Resident Disney Select ticket. This ticket is available only to Florida residents, and allows three ($202) or four ($223) days of admission (one park per day) within a 180-day window. The tickets are valid through December 17, 2016 (or 6 months after first use, whichever comes first), and have a number of blockout dates. The tickets were originally sold with blockout dates of March 19 through April 1, but Disney has since lifted that restriction. If you are a Florida resident, visit the Disney World website for details and to view the blockout dates for the rest of the year.

...Good news for collectors looking to get the whole set of 6 eggs offered as prizes in the 2016 Egg-stravaganza. Disney now allows egg hunters to choose which of the six different two-inch-tall eggs they would like as their gift—Mickey, Minnie, Stitch, Cheshire Cat, Woody, or Jessie. You can collect all 6, while supplies last.