Last weekend I was invited by Knott's Berry Farm to enjoy the 2016 Boysenberry Festival with my family. The annual event returns March 19 through April 3 this year, adding a "down home food fest" to the spring break season. 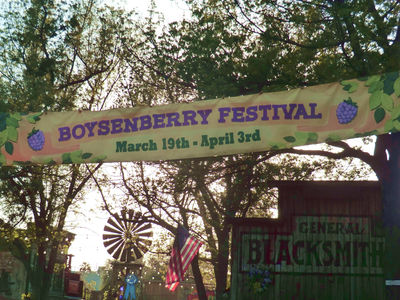 I can't remember the last time I visited Knott's Berry Farm—except to run through it during the annual Coaster Run—and I frankly didn't know what to expect. I had a vague awareness that part of the park was closed for refurbishment, and that one of the big roller coasters was closed for an update, but I'm so far out of the Knott's loop that I'd need a map, and the company of some friends who had visited much more recently than I, to find my way around. 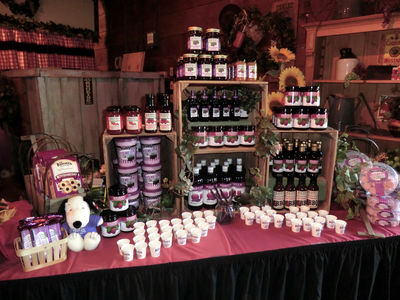 You can find everything from boysenberry chocolate to boysenberry BBQ sauce at the Knott's Berry Farm Boysenberry Festival. Photo by Adrienne Vincent-Phoenix. 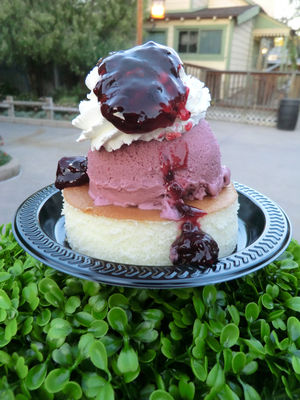 The boysenberry trifle is one of the new desserts for the 2016 Boysenberry Festival. Photo by Adrienne Vincent-Phoenix.

The easiest way to choose from the boysenberry bounty is to purchase the Tasting Card for $25. Each card entitles you to sample six specific items from the 2016 menu, a mix of sweet and savory dishes. This is a great place to start if you, like me, are experiencing the Boysenberry Festival for the first time.

After letting the kids spend time in the (surprisingly crowded) Camp Snoopy area, the grown-ups decided everyone could stand to eat. Tasting Cards in hand, we headed to Ghost Town to begin our progressive lunch.

We quickly realized that we would need to stand in line at six locations to sample everything on our cards, and just as quickly, realized the kids were in no mood to wait. Using our finely tuned MouseAdventure skills, we decided to divide and conquer, leaving some of the adults to wait in the very long line for the Boysenberry BBQ Short Ribs (new for the 2016 event), and sending everyone else to the much shorter line for the Spicy Boysenberry BBQ Wings. 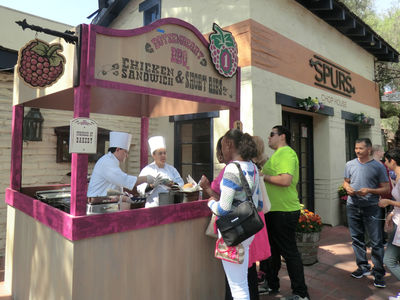 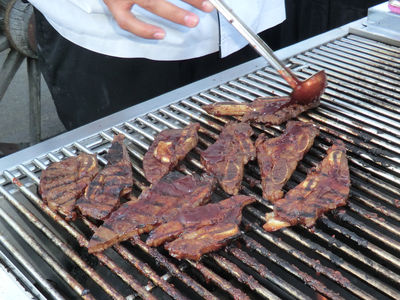 A Knott's chef grills up Korean-style short ribs during a media preview of the Boysenberry Festival foods. Photo by Adrienne Vincent-Phoenix. 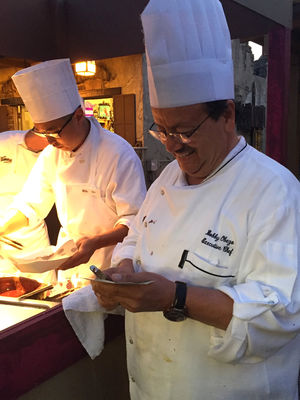 We noticed that each booth offered one or two dishes in addition to the items featured on the Tasting Card, but there was no easy way to also purchase those items. The booths are cashless, with signs directing you to a specific nearby restaurant to pay for the item before collecting it from the booth. This means that those without the Tasting Card, or who want to order a different item, have to stand in line twice for each booth. It's an inefficient system, and something I hope Knott's streamlines for future events.

Surprisingly, the booth had already sold out of the Korean-style short ribs by the time we got there around 1:00 p.m., and was instead serving beef ribs in the same sauce (the chefs also weren't mentioning the substitution to customers, even though the finished product looked nothing like the dish on display). The kids were happily munching on their chicken wings (which, despite the name, have very little heat at all), when we finally arrived with the BBQ ribs. The ribs were still a hit with our party, but not as tasty as the kalbi ribs we sampled during the media preview earlier in the week. We also learned that the boysenberry panna cotta, also on the Tasting Card, had run out, and would be unavailable until 3:00 p.m. 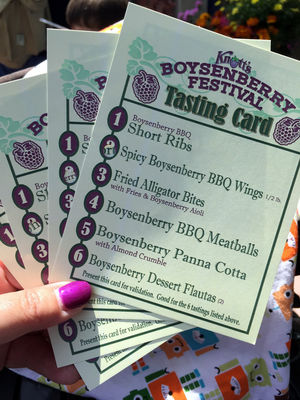 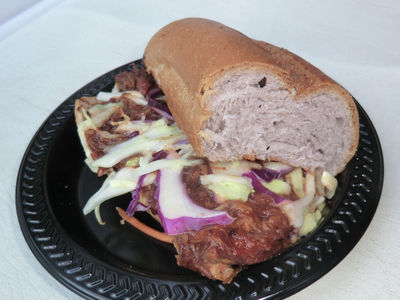 The pulled pork sandwich is served on a boysenberry-flavored bun. Photo by Adrienne Vincent-Phoenix. 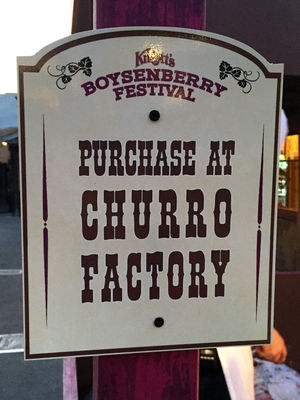 As is the case throughout the festival, food items are sold in one location but served in another, which often means waiting in line twice. Photo by Adrienne Vincent-Phoenix.

As the kids polished off the last of the wings and ribs, one adult set back out to pick up the Fried Alligator Bites. These are served in a paper cone filled with french fries, and accompanied by a boysenberry aioli dip and boysenberry "catsup."

Pro Tip: Wait until your kids have devoured the "nuggets" before you tell them they are made from alligator, not chicken.

We found the "sample" portions to be more than adequate, even splitting each with the kids. Too full to contemplate any of the other items at that time, we tucked the cards away and headed to watch competitive eater Joey Chestnut defend his title in the second annual Boysenberry Pie Eating Contest. He set a new record by eating 14.5 pounds of boysenberry pie in 8 minutes. 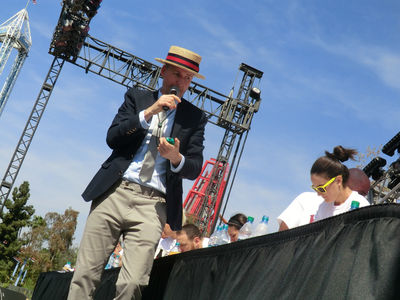 The master of ceremonies explains the rules before the start of the boysenberry pie eating contest. Photo by Adrienne Vincent-Phoenix. 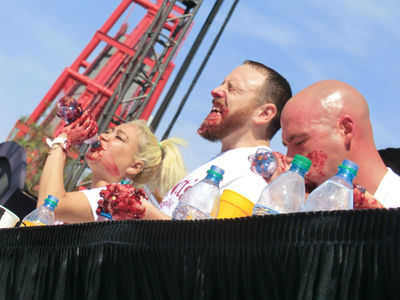 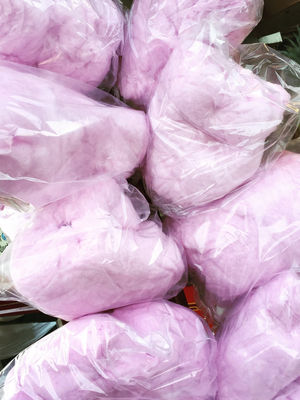 Even cotton candy takes on a boysenberry flavor and hue during the festival. Photo by Adrienne Vincent-Phoenix.

The kids were begging for more rides by now, so we took a break from Boysenberry Land and headed off to find something the too-scareds and too-shorts could do together. Back in Camp Snoopy, one of the kids opted to wait to meet Snoopy the Easter Beagle, while two others went on a ride.

My friends noted that the park was far more crowded than they had ever experienced, and we all wondered why Knott's would schedule a destination event like this during the peak spring break season. We also wondered if the turnout for the Boysenberry Festival was much greater than expected, considering how quickly they had run out of two of the featured items.

When the tiny bottomless pits began asking for snacks, we decided to head back to Ghost Town and pick up the Boysenberry Dessert Flautas on our way to check out the Wine & Craft Brew Tasting offering in the Wilderness Dance Hall. This venue also sells a Tasting Card for $25, which includes six pours from an extensive wine, beer and cider selection. Knott's offered complimentary boysenberry lemonade for the non-drinkers in the party, (which included two of the grown-ups), but we found it to be very strong and sweet, and some of the kids opted just for plain water. 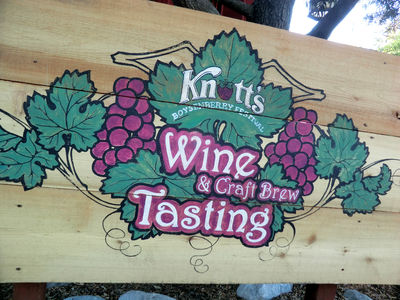 Beer, cider, and wine tasting is offered in the Wilderness Dance Hall. Photo by Adrienne Vincent-Phoenix. 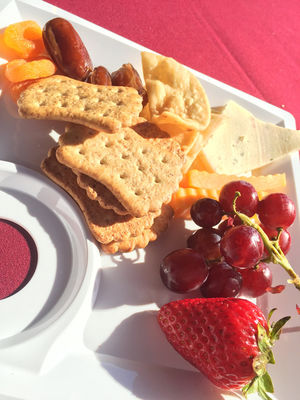 A plate of snacks is included with the purchase of a beverage tasting card. Photo by Adrienne Vincent-Phoenix. 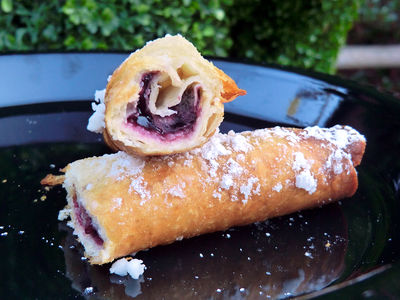 Don't worry if your kids find these boysenberry dessert flautas suspicious; that just means more for you. Photo by Adrienne Vincent-Phoenix.

Each tasting card also comes with a fruit, cheese and cracker plate. Ironically, the kids were much more interested in the whole-wheat crackers and fancy-cut cheeses than in the dessert flautas, which was perfectly fine with all of the adults. We found a table on the patio outside the Wilderness Dance Hall and enjoyed a short break from the crowds. Then it was back into the melee as the older kids made a beeline to another coaster, and the younger got sidetracked by the Peanuts Party in the Park, one of the many live shows presented throughout the day.

In fact, while this is on the surface a food and wine event, I was surprised at just how much entertainment was scheduled as part of the Boysenberry Festival. Bird Cage Square hosts interactive events every half-hour from 11:00 a.m. to 5:00 p.m. daily, including dueling fiddles, pie-eating contest, and games. At night, Krazy Kirk and the Hillbillies (formerly Disneyland's Billy Hill and the Hillbillies), perform inside the Bird Cage Theater. There's also nightly salsa dancing in Fiesta Village, and a nighttime dance party called Jammin' in the Dark. 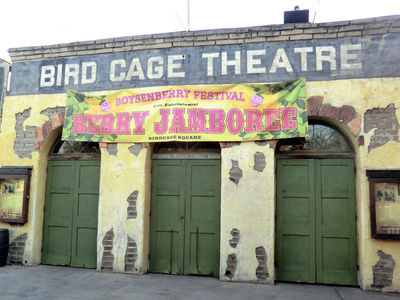 The Birdcage Theater and adjacent square host live entertainment throughout the day during the Boysenberry Festival. Photo by Adrienne Vincent-Phoenix. 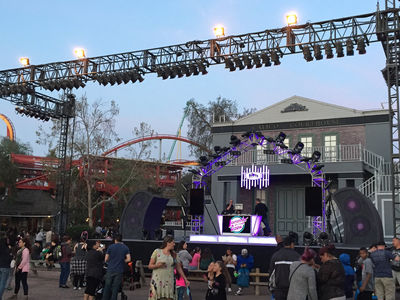 Jammin' After Dark takes place each night during the Boysenberry Festival. Photo by Adrienne Vincent-Phoenix. 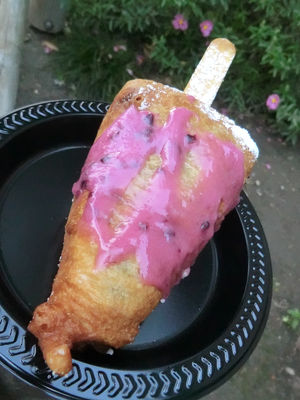 The Fun Stick, a deep-fried cheesecake creation, is new for 2016. Photo by Adrienne Vincent-Phoenix.

Our plan had been to sample the last two items on our way out of the park that night, but the kids were fading quickly and we didn't want to backtrack. Fortunately, the Tasting Cards are valid for the duration of the event, so we could go back another day before April 3 if we wanted.

That would also give us a chance to sample some of the other dishes that weren't part of the tasting cart, like the new Fun Stick, a new creation that might challenge the Fun Bun for the title of most decadent dessert. The Fun Stick is a slice of boysenberry cheesecake that is dipped in funnel cake batter and deep-fried, then smothered with boysenberry cream. Each Fun Stick is a whopping 2,000 calories of creamy goodness, and several people who sampled it during the media preview said they couldn't stop themselves from eating the whole thing.

With 2,000-calorie desserts on the menu, maybe it's safer that I only run through Knott's when it's not open, at least during Boysenberry Festival season.

Follow MPBeyond – With the Disneyland Resort entering another multi-year construction project, and so much going on at theme parks around Southern California, we've added a new Beyond the Berm section to the weekly Disneyland Resort Update published here on MousePlanet. Beyond the Berm will contain news from parks and attractions around Southern California. Don't worry, we're not losing our Disney focus. We just think readers may appreciate knowing about major events happing at the places might be planning to visit during your next trip to the Disneyland Resort.

We've also created new social media accounts to keep the Disney and non-Disney news separate. Be sure to follow @MPBeyond on Twitter and Instagram for updates from outside of Disney's kingdoms.

If you can't make it to Knott's for the Boysenberry Festival, you can recreate some of the dishes at home using sauces and seasoning mixes available from the Knott's Berry Farm Marketplace website.

Shape mixture into golf ball size meatballs, place 1 inch apart in pan. Bake at 350 degrees for 10-15 minutes, or until the center is no longer pink.

Heat the Berry Market Boysenberry BBQ Sauce on the stove or microwave for 2-3 mins.

Once the sauce is warmed, top the freshly made meatballs with the BBQ sauce.