I was never a runner. Sure, I played sports growing up, but I dreaded every minute of long runs at softball or basketball practice. Throw in a touch of childhood asthma, and forget about running farther than the length of the basketball court.

By the time I got pregnant with my first son, I was in the worst shape of my life. Having a desk job certainly didn't help. I just didn't have the motivation to get out and exercise. Despite the fact that I was happy to be able to stay home with him when he was born, I was restless. I wasn't sure what to do with myself all day at home taking care of this little person.

I realized that exercising was a good way for me to get out of the house and even meet people. I was able to join a "mommy and me" exercise group, where I learned that post-pregnancy running felt pretty good. I found that running was also a good way for me to have some "me" time during the day while I was home. I could put my son in the stroller, give him a snack, turn on some music with a portable speaker, and just go.

After having my second son, it took more energy to get out of the house, but it was still worth it.

A friend told me about the runDisney races before, but never thought it would be something I could do. But it would be fun, as a huge Disney fan, to combine my love for the parks with my newfound interest in running. How could I be a true Disney lover if I didn't have one of those fancy half marathon medals to prove it? So, since I assumed my youngest would be sleeping through the night by the time I was training to run (silly me), I signed up for the 2013 Disneyland Half Marathon.

OK, so training didn't quite go the way I had planned. Running during the summer with a 4-year-old and 1-year-old wasn't so easy. Then in July, just six weeks before the race (which was scheduled for Labor Day weekend), I dislocated my knee. I thought for sure that I wasn't going to be able to participate in the race that I had started to get excited about. But after a couple weeks off, I was able to get back into running, even though I wasn't running as fast or as far as I had hoped to be before race day. I was able to complete all 13.1 miles and came home with my shiny Disneyland Half Marathon medal.

I only wanted one medal. Just one. And I got one.

Then I wanted more.

Even though it was easier for me to take my kids out running as they got older, it got harder to push them! I decided to give the (6.2-mile) 10K races a try, since my body seemed to handle six miles pretty well. I did the 2014 Disneyland 10K and the 2015 Tinker Bell 10K with no problems.

Even though I swore I would never run another half marathon again, I signed up not just for the 2015 Disneyland Half Marathon, but the Dumbo Double Dare, which is both the 10K and half marathon in the same weekend. I had to—it was the tenth anniversary of the race and Disneyland's 60th birthday year. I am too big a Disney fan to pass that up.

With that race weekend coming up in September, once again, all of my training was in the summer. And my boys were both out of school. So, my only option to train during the week was by taking them with me. By last summer, their combined weight was close to 70 pounds, which made pushing a jogging stroller for several miles an intense workout.

I usually did my long runs on the weekends when my husband was home, but for several weeks I ran two to three miles while pushing the boys. They would happily listen to Disney music while I ran, often asking me, "Mom, what movie is this song from?" and I would try to answer between my huffing and puffing. Our runs often ended at the park so they could burn off some energy while I cooled down. 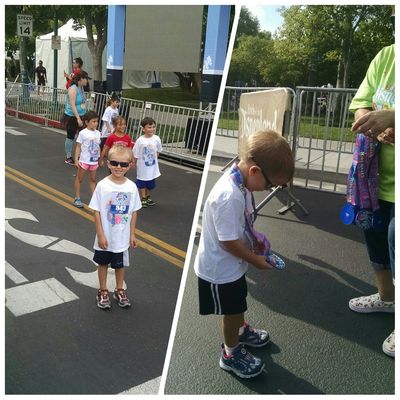 Since they have watched and "helped" me train for races, the boys were excited to try their own runDisney kids race. Photo by Lisa Maulhardt.

I was able to complete the Dumbo Double Dare and had a blast doing it. After that, I promised my husband I was done running half marathons; I was just going to stick to the 10ks. Then my friends all signed up for the Tinker Bell Half Marathon this year. Somehow, they convinced me to sign up with them. But, this is my last one. I promise. 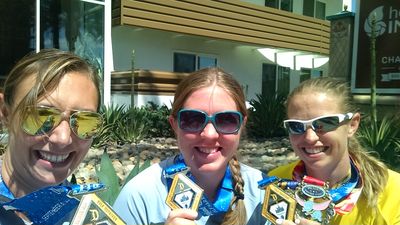 It is a lot of fun to run races with friends. Photo by Lisa Maulhardt.

I went from running my first race alone, to dragging my reluctant brother to run a couple with me, to getting friends to sign up to join me. I have now completed six runDisney races, and have already registered for three more this year.

I have learned a few things about running runDisney races. First, it's never too late to get out there to do it. After having kids, I was afraid to even try to run my first race, since I had never considered myself a good runner. But these races are about way more than just running them. Getting to run through the parks, seeing the characters, and being among other Disney fans really does have a magical feeling. 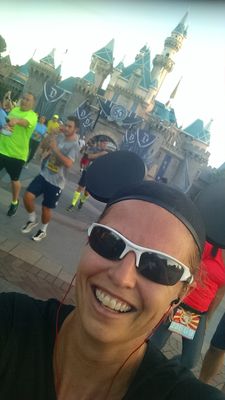 Running through the parks is a fun and magical experience. Photo by Lisa Maulhardt.

When I showed up to run my first race, I realized how underdressed I was—just in regular running clothes. Seeing the costumes that people run in is just incredible. I have since learned to dress more appropriately for these races. 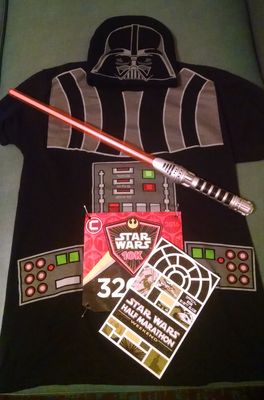 You will not be the only one dressed in a running costume for a runDisney race. Photo by Lisa Maulhardt.

Another thing I have learned about these races is that the competition isn't about running the race—it is in registering. If you are interested in running one, plan in advance (especially if you are trying to get a group of people to register). The 10K races can sell out in mere minutes, so be online as registration opens, if not a few minutes before.

I also learned that as a new mom, I needed to find something to do for myself. I quickly found that putting the kids in the stroller, knowing they were safe and happy, gave me a good 20–30 minutes of time to work out and feel good. Signing up for a runDisney races motivates me to get out and do it.

See you at the races!