This year I have been lucky enough to have good friends who also happen to be Annual Passholders at Disneyland. Although I enjoy taking my kids by myself, it is a lot of fun to join other Passholders as well. But when I go with friends who each have three kids, things can be unpredictable!

Before this past year, when my boys were both in preschool, I would spend many of their days off at Disneyland, just the three of us. We quickly settled into a routine of going in the morning, hitting the Redwood Creek Challenge Trail, The Little Mermaid, and Mater's Junkyard Jamboree before having lunch at Flo's V8 Café. Then after a nap, we would head to Disneyland to do a few rides there with short lines, like "it's a small world," or Buzz Lightyear Astro Blasters, before heading home for the day. Now that my oldest son is in kindergarten, we were finding it hard to go during the week. Then, we decided to try going in the afternoon, when my friends were going.

With eight kids between us (six boys and two girls between the ages of 2 and 7), we certainly have our hands and strollers full. There were several things I had to get used to in going from just me and my boys to having a group of 11. First, decisions aren't quick. Everything from "which park should we start at?" to "what ride should we do next?" requires more discussion. Luckily, even though the older kids are able to ride a lot of the bigger rides, they are happy to be on the rides we all can do together. In our group, the Redwood Creek Challenge Trail, Toy Story Midway Mania, and Buzz Lightyear tend to be favorites that everyone can enjoy. 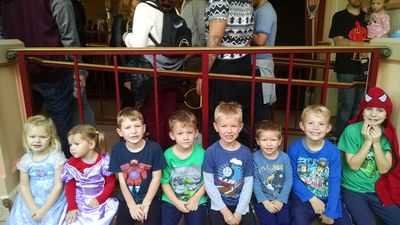 Toy Story Midway Mania is a favorite of this group. Photo by Lisa Maulhardt.

If your kids are willing to stay late enough, our group loves the World of Color, Paint the Night Parade and Disneyland Forever fireworks. 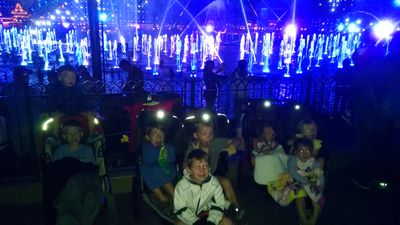 If the kids are up for it, the parks have some great nighttime shows. Photo by Lisa Maulhardt.

The next thing I learned is that bathroom stops can take 30 minutes. With a couple of the younger ones potty training, we try to make sure we check often to see if anyone needs to go. If we know we are going to stand in a long line for something, getting eight kids in and out of the bathroom is no joke.

The third thing I have learned is to come with snacks. My boys are pretty good eaters and are happy to have a snack and a meal at one of the restaurants at the parks, but my friends have some pickier eaters. It was a bit of an eye-opener for me to see how much food these eight kids can pack away in a few short hours at the parks. Someone is always munching on something! When we do end up sitting down to eat a meal, which my boys look forward to no matter how many snacks they have consumed already, it takes us an hour to feed them all. 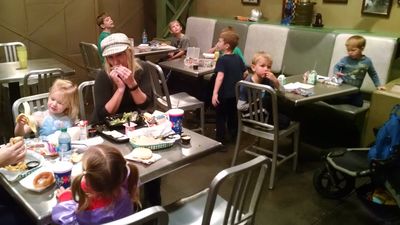 With a group this size, it is best to find a place to corral the kids while eating. Photo by Lisa Maulhardt.

We moms enjoy hearing random comments from people as we walk by: "Wow, that's a lot of kids!" or, "Is that three sets of twins?" It seems like every time we go, we are turning heads. Maybe it's because our strollers tend to take up the whole walkway. 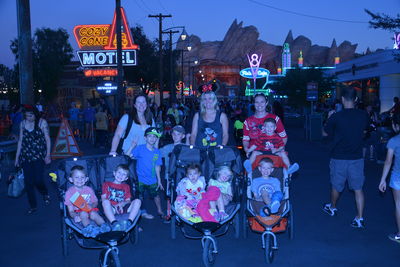 This stroller group turns heads when we are together. Photo by Lisa Maulhardt, courtesy of Disney PhotoPass.

Now that we have all been several times together, the biggest thing that I have learned was to just relax and enjoy it. This doesn't mean that we let our children be disruptive and run amok, but I no longer feel the pressure to have the "perfect" day. I was always trying to be sure that my kids got to do what they wanted and that they enjoyed doing it all. But I realized that those were my expectations, not theirs. When we are with our friends, they just enjoy being there. It doesn't matter what we ride or eat. It's about the time spent with people we love.

With that said, there are some things you can do in advance to prepare for traveling to the Disneyland Resort with a large group. First, know what rides each of your kids is tall enough for or are wanting to/willing to ride. Depending on the age gap of your kids, you may have some that want to ride a fast ride that the younger ones aren't tall enough for. Keep in mind that a child has to be 7 before they can ride "on their own." Kids under 7 will have to have an adult with them. The best example of this is the Golden Zephyr in Disney California Adventure. They require one adult per child under 7—no lap sitting and only two people per row—so when I am there alone with my two boys, we can't ride that one.

Second, bring snacks. Having hungry kids makes everything that much harder to do. And with large groups, purchasing snacks all day can add up fast. Also, if you know your child is a picky eater, it might be good to pack something you know they will eat, just in case you decide there isn't much on the menu for them.

Third, remember it's OK to split up. Sometimes the best thing to do is "divide and conquer." One person can take the older kids on a ride the others can't do. Maybe you have some that want to take pictures with a character while the other go on a ride, or even if you want something different to eat, meet back up when you are done.

It may also be a good idea to talk to your kids (no matter how big your group is) about what to do if they get separated from you. Show them how cast members are dressed and explain what they need to say. The larger the group, the easier it is for a kid to walk away without your noticing.

And lastly, enjoy your day. It can be a bit chaotic at times with big groups. But don't stress about what you don't do because your kids are only going to remember the things they did get to do and the people they got to do it with.