Since my last article a few weeks back, the countdown to our Walt Disney World vacation this summer is in full swing. We've still got three months to go, which is plenty of time, but each day does bring the magic closer and closer. The anticipation keeps building and building as we eagerly await our week at The Yacht Club with a big group of friends. Some of us will be traveling together for the first time and others will be on our third Disney trip together. As I mentioned in my last Top 5 article about The Magic Kingdom, there will be one newbie first-timer with us, one of my daughter's closest friends, Syd.

He was essentially the inspiration for this series of Top 5's covering each of the four Walt Disney World theme parks. I had been talking so much to him about this trip and preparing him for his first time in the magic. There were so many tips and facts that seem to be stored in my Disney file cabinet of a brain that I thought it was time to get them all down on paper…or on pixels…or whatever it is that you call it when you're publishing online.

So, the Magic Kingdom was the natural starting line for this series. As many of you know, it was the first park in Orlando back in 1971. It's what most of the world envisions when they even think of Walt Disney World. More importantly, to so many of us, this writer included, the Magic Kingdom is the proverbial heart of Walt Disney World. This time, following along with the timeline of the most magical place on Earth, I thought it wise to tackle Epcot.

It was the second park built and had its roots with Walt Disney himself. He wanted Epcot to be an actual representation of its name, the Experimental Prototype Community of Tomorrow. That's why it used to be spelled in all caps, as the acronym that it was, EPCOT. If you've never seen the film of Walt Disney explaining exactly what his vision of this experimental city would be like, do yourself a favor and seek it out. It can be viewed on YouTube and it was also available on the Walt Disney Treasures Tomorrowland DVD release. It's a fascinating 25-minute film that is proof of just how forward thinking and how sincere a visionary Walt Disney was.

The fact that Epcot is not exactly what Walt envisioned is a whole other article in itself. That fact really doesn't matter. Epcot is truly a one-of-a-kind place. One could definitely say that the Magic Kingdom is a grander version of Disneyland. For comparison's sake, you could find similarities in the Universal movie-themed parks of the world and Disney's Hollywood Studios. And while it is clearly "nahtazu," Disney's Animal Kingdom can find some brethren in the high-end zoos and parks of the world such as the San Diego Zoo, the Bronx Zoo, and Busch Gardens Africa. But Epcot is in a class all of its own and more akin to the glorious World's Fairs of a bygone era. It has no close comparison. Simply stated, there's just nothing else like it.

So, if there's nothing like Epcot, what do you tell someone who's going there for the fist time? Let's take a look with my Top 5 Epcot tips.

5 - Hit World Showcase when it Opens 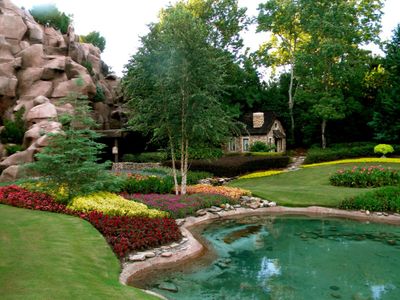 Start at Canada's Victoria Gardens first thing in the morning and you'll find it remarkably empty and as beautiful as ever. Photo by J. Jeff Kober.

I absolutely adore World Showcase at night. It takes on a whole new atmosphere, but more on that later. While everyone is still tackling the attractions in the Future World half of the park, the countries of World Showcase quietly open at 11:00 a.m. each day. You could just about have the place to yourself before the rest of the hordes even realize it's open. That may unfortunately change a bit once Frozen takes over Norway, but my guess is if you start on the Canada side of the Showcase at 11 a.m., it will still be nice and quiet. You could head back to Future World later on when everyone else is discovering that the countries have opened for the day.

There's so much good food to have in Epcot and just about all of it is in World Showcase. The one exception in Future World, when it comes to getting some quality food fast is the Sunshine Seasons food court in The Land pavilion. You'd be hard pressed to find a quick service dining spot in all of Walt Disney World with this much variety, and some pretty healthy options as well. This is not the place for the chicken tender and fry crowd. Where else in a theme park can you get fish tacos, a vegetable flatbread sandwich, pumpkin squash soup, oak grilled salmon, spicy Thai green curry shrimp or a roast beet and goat cheese salad? 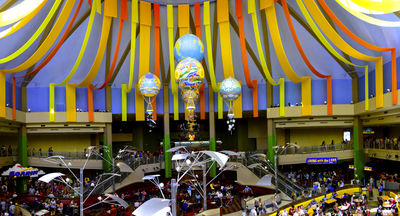 The food court looks like total chaos from above, but it's an illusion of its size. There are many different offerings of cuisine, and lots of places to sit and enjoy your meal. Photo by Donald Fink.

The bakery offers a delicious choice of options as well. Try the Key Lime tart or the Black Forest or apple spice cupcakes. I'm also a big fan of the tabouleh wraps from the Grab and Go case. Besides the excellent food choices, as soon as you're done eating, you could just about always walk on to Living With the Land with no wait, which happens to be right next door. 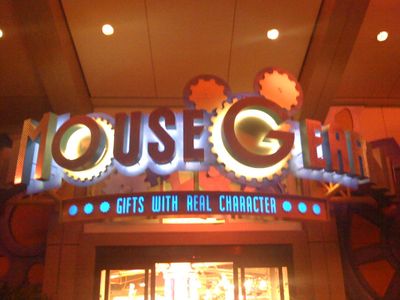 As the sign says, MouseGear is a place for "gifts with real character." Photo by Jeff Kober.

Hands down, the best Disney gift shop in all of Walt Disney World has to be MouseGear in Epcot's Future World. This is the place to go for your Mickey everything and anything. It's more open and roomy than the Magic Kingdom's Emporium and way more sane than the World of Disney over at Disney Springs. They've got just about everything here and it's got such a fun atmosphere. The giant gear contraption on the walls is a favorite thing of my kids and me as is the glimpse of the Dreamfinder ship from the old Journey Into Imagination. We always save a last shopping spree for MouseGear on our final day in Walt Disney World. I think it's the best shop on property.

I had this very same suggestion for Wishes at the Magic Kingdom. This is even a bigger tip when it comes to Epcot. People don't seem to realize that they don't close or kick you out immediately. You could easily get an extra 45 minutes or so in World Showcase and be thrilled to find that you will have it pretty much to yourselves. The flock heads to the exits and crowded busses and monorails. You shouldn't be one of those people. Stick around and see just how beautifully tranquil World Showcase can get. 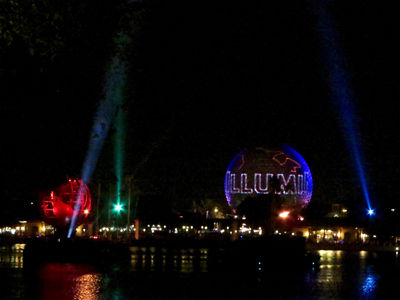 After Illuminations: Reflections of Earth concludes its nightly show at Epcot, and most folks head for the exits, the music, lights, and lasers continue to perform for the duration of the song "Promise." Photo by Alan S. Dalinka.

On one of our last trips to the World, our crew was headed home to the Yacht Club after a long Epcot Extra Magic Hours night. It was about ten minutes to 11 p.m. as we were heading into the International Gateway back home to the Yacht Club. The park was closing in ten minutes. My daughter and I wanted one last ride on Maelstrom because it was due to close for good shortly after our visit.

We hoofed it over to Norway and were two of the last people to get into the queue. It was pretty crowded. We assumed that was due to the impending Frozen invasion that was on its way to the pavilion. I guess we weren't the only ones that wanted a final ride. Anyway, by the time we exited through the Puffin's Roost and hung a left towards home, we were essentially alone. We slowly meandered our way around the promenade by ourselves, the occasional cast member cleaning up, the lights twinkling, Spaceship Earth bathed in light off in the distance, just my grew-up-way-too-fast daughter and me. It was… just perfect. You won't have an experience like that if you rush out to the bus, I can guarantee you that.

1 – Give Epcot the Time it Deserves

Could you have a great time and see a lot of Epcot in one marathon day? Sure you could. But should you? My advice is an emphatic, "No!" Epcot, like all of the Disney parks needs to be experienced at a comfortable slower pace. It needs to be soaked in. If you slow down and do it right, you could easily spend a whole day just exploring the incredible World Showcase and still not see it all. Personally, I prefer to have Park Hopper tickets and make many trips back to Epcot over the course of my visit. That way I can spend some time seeing the big attractions, then spend some more time wandering through the 11 countries, spend even more time in the amazing shops of World Showcase and don't even get me started on all of the food and drinks there are to indulge in!

Take time and see the exhibits in Innoventions. Gaze at the marine life in The Seas, especially the manatees. Spend extra time with the kids in the Mission: SPACE Advanced Training Lab even if you don't visit the main attraction. Explore the elaborate details of the Morocco pavilion. Wander around the gardens and waterfalls of Canada. Visit the always fascinating exhibits in the Bijutsu-kan Gallery in Japan. Epcot needs time. Honestly, I never feel like I get enough. 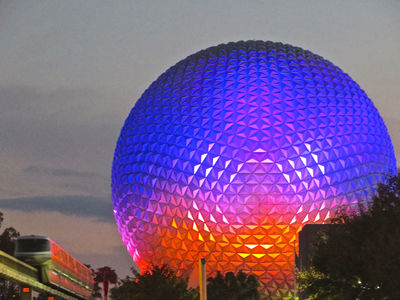 The lighting of Spaceship Earth contrasts with the early evening sky while walking to Epcot's turnstiles. Photo by Alan S. Dalinka

I think some people still feel like Epcot is a "learning park" and that kids won't have fun here. I will always argue that point. No, it doesn't have anywhere near the amount of little-kid friendly attractions as the Magic Kingdom, but my three kids have always loved Epcot, even when they were little tots. Don't ever dismiss Epcot because you will be missing out on something truly special.

Our last two trips have been at Epcot resorts on Crescent Lake. Last time we were at The Yacht Club. The year before that we were over at BoardWalk. This time it's back to The Yacht Club and one of the reasons is clearly its proximity to World Showcase. You just can't beat being able to casually walk into Epcot from your hotel. Staying there really keeps you inside the magic Disney bubble. Slowly but surely, the Epcot resort area is becoming our new home.

We always spend our final night of a Walt Disney World trip in Epcot and my wife and I will inevitably say to each other, even after a full week, "Boy, I wish we had more time here." That's how I always feel when I leave Walt Disney World, but Epcot is always the place that leaves me wanting more. As I said before, there's just nothing else like it anywhere in the world and I can't wait to be there again soon. And in just a little over two months... I will be.