Disney Springs hosts a grand debut | This and That | Crowd Forecast

[Author's Note: This week I'm turning the Update over to Alan Dalinka, who shares a photo tour of the grand opening of Disney Springs. We'll return to your regularly scheduled Update next week. – AVP]

On Sunday, May 15, Walt Disney World Resort officially opened the Town Center "neighborhood" of Disney Springs, the latest major construction milestone in the transformation of the former Downtown Disney area.

Disney Springs is now substantially complete, though there are still several projects underway. Additional stores and restaurants will continue to open through the year, a number of new buildings around Disney Springs are still under construction (like The Edison, now expected in early 2017), and other projects have been announced without any timeline (like the closing of DisneyQuest). 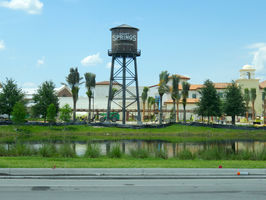 The water tower icon for Disney Springs was installed back in March 2016 and the landscaping was filled in as Town Center's May 15 grand opening approached. Photo by Alan S. Dalinka. 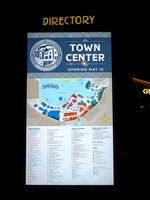 Before Disney announced in 2013 the transformation of Downtown Disney into Disney Springs, the area consisted of the Marketplace (the original Disney shopping "Village," which includes the World of Disney store), the largely shuttered Pleasure Island (with the buildings that formerly housed its clubs, which closed back in September 2008), and the West Side (home of such venues as Cirque du Soleil's La Nouba and the soon-to-close DisneyQuest).

The entire area was officially renamed "Disney Springs" in September 2015, and now includes four neighborhoods: West Side, The Landing (the former Pleasure Island), Marketplace, and the new Town Center. This final piece of Disney Springs was constructed on what was previously surface parking lots and service areas for Pleasure Island and the Marketplace.

In a brief 10:00 a.m. pre-rope drop ceremony on this past Sunday, May 15, Keith Bradford, Vice President, Disney Springs, welcomed the gathered crowd:

"We want to welcome you to the newest neighborhood of Disney Springs: Town Center. Once you're inside you're going to get to see things: World Class Shopping and Dining, and Breathtaking views of the Spring that will absolutely blow you away. It is the heart and soul of this Property. Our Imagineers have done a tremendous job in the design and all the details that have gone within that. Today we open 23 new retail locations, stores such as Tommy Bahama, Vera Bradley, Lucky Brand, Zara and others;. we open 7 specialty food and beverage locations such as D-Luxe Burger, Amorette's Patisserie and Sprinkles Cupcakes. You're going to have a blast." 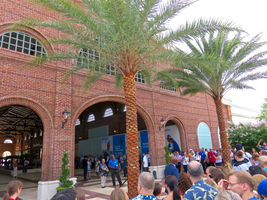 As 10 a.m. approached on May 15, a crowd gathered outside the (unnamed) arcade of shops on the west side of Town Center for the official Grand Opening and rope drop. Photo by Alan S. Dalinka.

Bradford then welcomed the Rice family from Orlando as the first "official family" to Town Center, and concluded, "So, with that said, thanks so much for being here this morning and welcome to Town Center!" 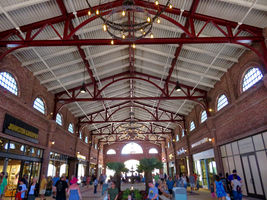 The arcade of shops in Town Center is not enclosed, but provides shade from the sun and will likely become crowded with guests seeking shelter during typical summer afternoon rainstorms. Photo by Alan S. Dalinka. 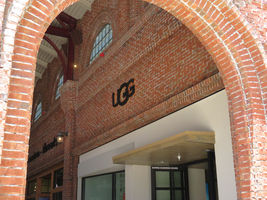 Ugg is one of the retailers inside the arcade of shops at Town Center that sells some Disney licensed merchandise. Photo by Alan S. Dalinka.

A new area for Disney resort buses has been constructed adjacent to the water tower landmark just outside Town Center, which is expected to open within the next few weeks (cast members on-site, estimated May 29; the official Disney Springs map says "beginning early June"). The official map suggests that the existing Disney Resorts bus stops adjacent to Marketplace may be discontinued when the new bus area opens.

The new bus area connects to Buena Vista Drive with newly built, protected/dedicated bus lanes that may ease traffic around the area, though easing traffic will also depend on the timing of the traffic lights which, at least during this past week, were such that guests exiting the Orange garage experienced significant back-ups on the exit ramps.

Of course, as has been true for many years, buses from Disney Springs will not provide direct transportation to Magic Kingdom, Epcot, Disney's Hollywood Studios, or Disney's Animal Kingdom theme parks or Disney's Blizzard Beach Water Park—all of those destinations still require changing buses at a Disney resort hotel. 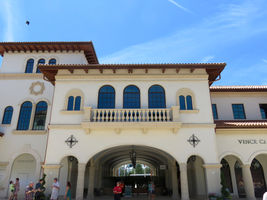 In the center of Town Center, "the Gateway" is where guests arriving and departing Disney Springs via Disney Transport resort buses will go once the bus area opens, expected to happen in the next couple of weeks. Photo by Alan S. Dalinka. 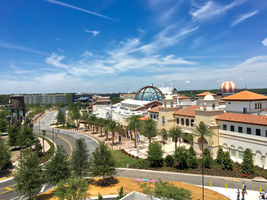 The Gateway faces Buena Vista Drive and the new water tower icon for Disney Springs. Bus loading and unloading will happen in this area. Photo by Alan S. Dalinka 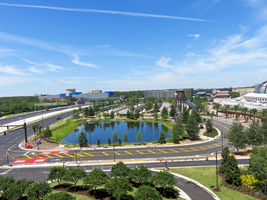 Disney buses will enter and exit Disney Springs in marked lanes (see the red area on the pavement) and will have exclusive use of the lighter-colored protected bus lanes in the middle of the road when traveling on Buena Vista Drive. Photo by Alan S. Dalinka. 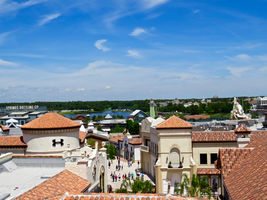 The new Lime garage is located just east of the Gateway and from the top level on the fifth floor, provides stunning views of Town Center and surroundings. Photo by Alan S. Dalinka.

To replace parking areas incorporated into the new areas and provide additional parking, two five-level parking structures were built along Buena Vista Drive with pedestrian bridges connecting the structures to Disney Springs. The lot adjacent to the West Side opened in 2014 and is named the "Orange" garage; the new "Lime" garage adjacent to Town Center opened within a couple hours of the Town Center's Grand Opening.

To ease traffic in the area, the Orange garage is connected to an I-4 exit ramp by a newly constructed flyover, and visitors traveling east on Buena Vista Drive likewise use a new ramp on the right side of the road to join the flyover rather than make left turns. According to the official map of Disney Springs, the remaining surface lots near the West Side have been designated "Strawberry", "Watermelon", "Grapefruit," and "Mango." 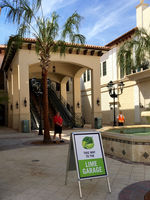 The Lime garage's sole pedestrian bridge and entry area is decorated in the same style as the surrounding Town Center neighborhood. Photo by Alan S. Dalinka. 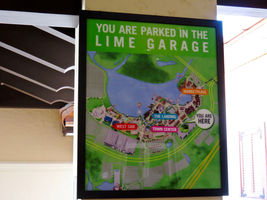 Like the slightly older Orange garage near the West Side, the Lime garage has extensive signage to remind guests where they have parked. Also like the Orange garage, digital signage and colored lighting indicate the availability of parking spaces throughout the structure. Photo by Alan S. Dalinka. 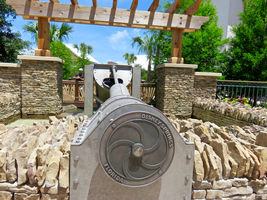 In keeping with its Disney Imagineer-crafted backstory, in the middle of Town Center is a well that guests can operate to bring "spring" water into a pond. Photo by Alan S. Dalinka. 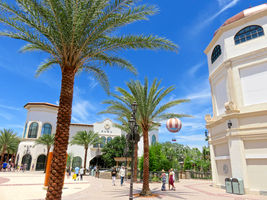 Much of Town Center looks like a high-end shopping district, albeit highly and beautifully decorated according to a very specific theme. Photo by Alan S. Dalinka. 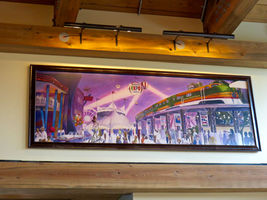 The elaborate Disney Imagineer-crafted backstory of Disney Springs is illustrated in artwork hung inside the Guest Relations building in Town Center. A 1950s expo is shown to have been the explanation for the West Side's appearance and partially remaining elevated train track supports. Photo by Alan S. Dalinka. 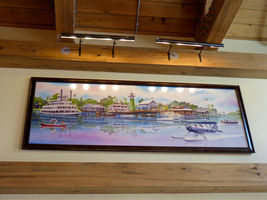 In Town Center's guest relations building, a piece of artwork shows off a Disney Imagineer-crafted view of The Landings neighborhood of Disney Springs in days gone by. Photo by Alan S. Dalinka. 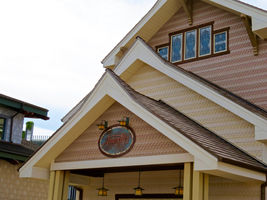 Amorette's Patisserie is located immediately next door to the World of Disney store, where Town Center meets the Marketplace neighborhood. Photo by Alan S. Dalinka. 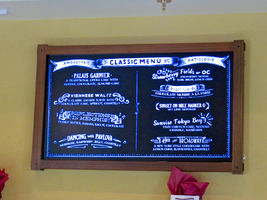 Amorette's Patisserie has a large selection of pastries, from single-serving sizes (mostly around $8), petit cakes ($15), dome cakes in the shapes of Disney characters ($65), to their signature 11-layer cake ($85), as well as alcoholic and other beverages. Photo by Alan S. Dalinka. 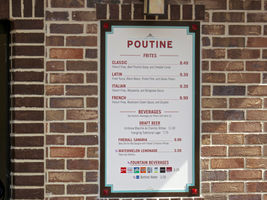 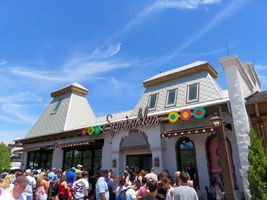 The busiest building during the Town Center grand opening morning was definitely Sprinkles Cupcakes. The building has two lines: one to go inside and one to use the Cupcake ATM (in pink on the right of the photo). Photo by Alan S. Dalinka. 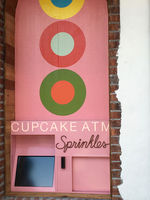 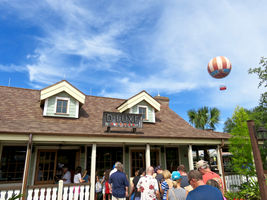 The Disney-created D-Luxe Burger restaurant offers up "gourmet" burgers starting at $9.99 along with views of the springs. Photo by Alan S. Dalinka. 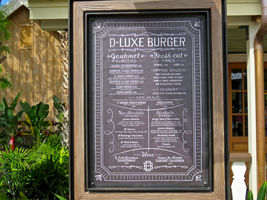 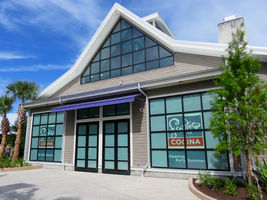 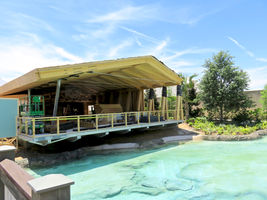 Blaze Pizza, a national chain of what it describes as "Fast Fire'd" pizzas, is coming to Town Center this summer. Photo by Alan S. Dalinka. 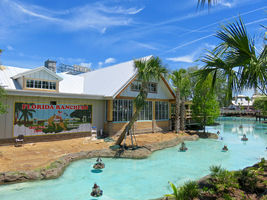 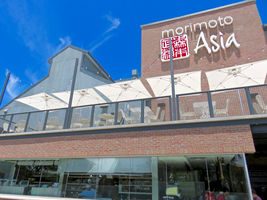 The opening of Town Center reveals windows on the Morimoto Asia kitchen along with the re-opening of the outdoor Morimoto Street Food location. Photo by Alan S. Dalinka. 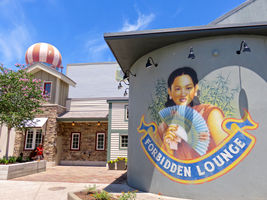 The opening of Town Center has revealed additional detail and art for the Forbidden Lounge inside Morimoto Asia. Photo by Alan S. Dalinka. 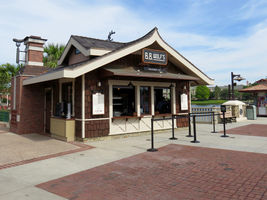 In the Marketplace next to the pedestrian bridge near T-Rex, B. B. Wolf's Sausages kiosk opened on the same day as Town Center. Photo by Alan S. Dalinka. 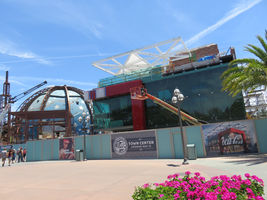 Between Town Center and the West Side near the Orange garage, work continues on the Coca Cola Store (expected to open this summer) and Planet Hollywood Observatory (which is now is not expected to reopen until this fall). Photo by Alan S. Dalinka.