Lifespan of New Attractions: Waiting for the Hype to Fade

After some delays, it looks like within six weeks Animal Kingdom and Epcot will have opened their latest additions and completed ongoing refurbishments. Rivers of Light at Animal Kingdom brings the first nighttime entertainment to that park along with an evening ride on Kilimanjaro Safaris for the first time. At Epcot, Soarin' will show off its newest film and Frozen Ever After brings the popular movie characters to the Norway pavilion. 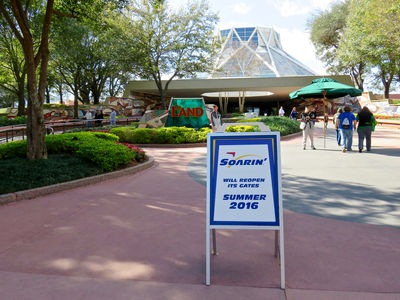 Soarin' reopens May 27 to show the Soarin' Over California film; Soarin' Over the World premieres on June 17. Photo by Alan Dalinka.

Whenever new attractions open or reopen at Disney parks, guests fall into two groups. The first group, let's call them type "A" (pun intended), need to be there on opening day. They want to be first in line to experience the new stuff. Then there is type "B", those who are interested in seeing the new stuff but don't want to be a part of the initial rush. So, how long does one have to wait such that the attractions still feel "new" but the crowds and wait times are normal?

Of course it depends on the popularity of the attraction as well as its design and capacity. When Star Tours became Star Tours: The Adventure Continues, the attraction had huge waits for about a month, but the ride has such a large capacity that soon wait times settled to normal levels. Meanwhile, Frozen was such a popular movie that meeting Anna and Elsa became a major bottleneck to touring Magic Kingdom. Even eight months after opening, meeting these two could take as long as 90 minutes.

Then there are rides like Alice in Wonderland at Disneyland Park, which closed for a lengthy refurbishment in 2014 then reopened with wait times double what they were before. Even two years later that ride has not seen a significant dip in wait times. Time of year also can be a factor. A lot of refurbishments take place during the least crowded times of the year then reopen when the parks get busier. Busy parks mean long waits, especially for new attractions.

The latest additions to Epcot and Animal Kingdom are happening now, in late May and mid-June. These are historically moderate to busy times of the year, so it is reasonable to expect that wait times for these new attractions will skyrocket on their respective opening days and stay pretty busy for much of the summer. However, there are a lot of new things happening at the same time and that is something that we haven't seen in the past.

It may be that summer guests will be equally as curious about what's new at Animal Kingdom and at Epcot that it spreads out the rush across both parks. Also—with the exception of Frozen Ever After—these new attractions have very large capacities. Soarin' has a new film which will be very popular in the short term but it also has increased capacity by 50 percent with the addition of a new theatre. It won't take long for those two facts to offset themselves, and we expect wait times at Soarin' to be similar to what they were before, in the long run.

At Animal Kingdom, Rivers of Light will draw many thousands of extra guests in the short term but it is likely that within a few months the crowds will settle. We predict that Kilimanjaro Safaris will be very popular once it starts offering evening rides but that wait times at that attraction will return to normal levels by the end of the summer.

Frozen Ever After is a wild card. A short ride with limited capacity featuring some of the most popular characters ever sounds like a major bottleneck, and it very well could be. However, it is located in a park that doesn't already have a slew of families with young children. When Disney moved the Tangled and Frozen character meet and greets to parks other than Magic Kingdom and Disneyland, we saw major drops in the wait times. Perhaps, after the initial boost, Frozen Ever After will be a popular attraction but not have wait times that exceed 60 minutes except on the busiest of days.

The issue for most of these attractions is that they are opening as we head directly into the busy summer season. Even without new attractions to draw guests, the parks are very busy in the summer. These new attractions may make some parts of the parks even busier than usual. The silver lining is that after summer we have what has been historically the least crowded time of the year—late August and early September.

Fall 2016 sets up nicely as a period of lower crowds, three months after the excitement of new attractions has worn down. If you can wait until then I think we will see reasonable and manageable wait times at these new attractions. Or perhaps, to put it more simply, that's when I'm planning my trip.