MouseAdventure Frolics Among the Flowers for Silly Symphonies

On May 14, teams tackled MouseAdventure Silly Symphonies at Walt Disney World's Epcot Resort area, and Epcot's World Showcase and Future World. The Silly Symphonies theme is an homage to the Walt Disney Studios' Silly Symphony shorts, which were produced from 1929 to 1939. Each quest was named after a short, loosely tied to the quest's area of focus or question. Fifty-four teams wandered the lobbies of hotels, skipped across the BoardWalk, and wrestled through the crowds in World Showcase, all with Epcot's annual Flower and Garden Festival as a backdrop. 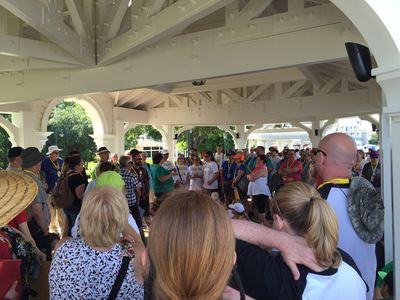 The players all arrived at Sea Breeze Point (the BoardWalk Gazebo), for registration around 9:00 a.m. As usual, many teams had customized shirts and/or outfits, and everyone seemed to be in good spirits and ready to start the game. Staff working the lines got to meet and greet with several familiar faces, but we also met a lot of new players and also future players-to-be in strollers. The Third Gate Games crew introduced the game promptly at 10:00 a.m., mentioning that the rules were scheduled to run from 10:00 a.m. until 10:30 p.m., or approximately twelve and a half hours (one team had been thoroughly reading their game packet, and pointed this out with glee). After about 20 minutes, however, the crew ran out of things to stretch for the full twelve hours, and the instruction to the teams was given to scatter.

The morning portion of the game was spent at the Epcot resorts, and players picked up their quest packets on opposite sides of the bridge over Crescent Lake, to guide teams toward the Yacht and Beach Club side or the BoardWalk side of the lake. Immediately after the scatter, many teams took off with their packets for analysis, while others stayed near the scatter location and looked over every single piece of paper to figure where to start and what to concentrate on.

Teams tackled seven quests in the morning at the Yacht Club, Beach Club, and Boardwalk resorts. At the Yacht Club, one quest challenged teams to find a series of images and then answer the questions associated with them. Highlighted boxes in the quest answer grid spelled out a ship name, The Atocha, found on one of two chests in the lobby; players answered the quest with the name on the other chest, Titanic.

The other quest at the Yacht Club required teams to decode maritime signal flags by using the flags in the Captain's Grille sign as well as those found on one of two chairs in the lobby, which teams had to locate based on provided clues. Some teams were able to decode the cypher even without locating the flag-upholstered chairs.

At the Beach Club, teams were tasked with some tricky eye-spy images scattered throughout the lobby and entry halls of the Inn and the nearby Villas. One image of a crab, found on a weathervane in the Villas' Breezeway room, eluded a few teams.

At the Boardwalk, teams explored the historical signs and objects in the lobby that detail the history of Coney Island and Luna Park in the early 20th century to fill in a crossword puzzle. Numbered boxes spelled out the final question, directing teams to closely examine the model of the Flip Flap coaster and determine the brand of ice cream sold at the tiny stand inside. The Flip Flap was the first coaster in North America to have an inverted loop. 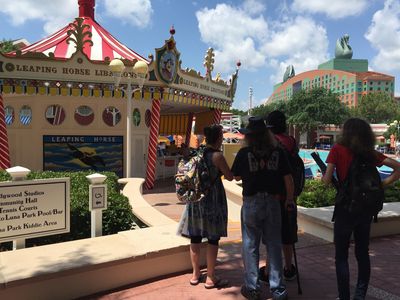 A team studies the horse paintings on the Leaping Libations bar. Photo by Stephanie Wien.

Teams also used decorations on the Leaping Libations pool bar, designed to look like a carousel, to translate a series of repeated images into a final question. This quest had teams looking high and low; the final answer was located close to the ground on billboard ads along the side of the coaster-shaped pool slide.

To wrap up the resort quests, teams had two quests on the outside of the Boardwalk area. One used the signs on Boardwalk businesses to spell out a question, and the second used the spyglasses located all around Crescent Lake to decode a series of symbols. The decoded questions asked teams for the name of the pier near the Boardwalk, and the name of the wrecked ship at the Beach Club pool.

Teams were given support in the resorts area until 1:30 p.m., when play transitioned to the Epcot park portion of the game. At that time, MouseAdventure Central was relocated near the Port of Entry shop in World Showcase, and teams traded in their Resort Quests answer sheet in order to receive their Epcot Park quests packet. The park quest packet contained nine quests for teams to complete in the remaining four and a half hours.

The heat of the day began to intensify as teams decided whether to tackle Future World or World Showcase first. Based on the crowds at Japan later in the day, it seems many teams headed straight for the Festival Center due to warnings about a 5 p.m. closure combined with the prospect of air conditioning. Teams were given until 6 p.m. to hand in their answer sheets for the end of the game. 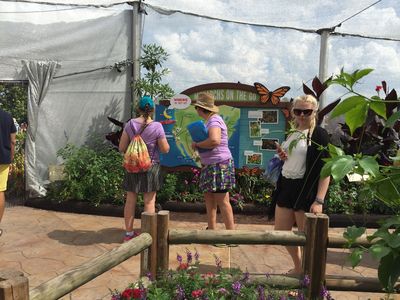 A team looks for answers to a quest in the butterfly exhibit at Epcot's Flower and Garden Festival. Photo by Stephanie Wien.

The parks quests made extensive use of the Flower and Garden Festival exhibits on display in Epcot. Teams searched the Fire Garden for the final answer to the Mexico pavilion quest, which was the name of a pepper with a specific heat index on the Scoville scale. The tea garden in the United Kingdom pavilion featured tea names that were used to create a final phrase that directed them to the other special garden in the area, the Shakespeare Garden.

Teams visited the Festival Center to search for numbers in the Horticulture Heritage of the Disney parks exhibit. Teams solved a simple math problem to determine the proper numbered question to answer from the set provided. This quest provided a great opportunity to stay out of the mid-afternoon heat; teams also took advantage of the many places to sit to work on other quests or even have a quick snack.

A search for sets and groups of words and phrases led teams around Future World West's Urban Farm Eats, Butterflies on the Go, and Backyard Habitat gardens. A misspelled word on one of the butterfly exhibit signs created a bit of a headache for the teams, and the final answer located in the butterfly tent proved elusive for many. 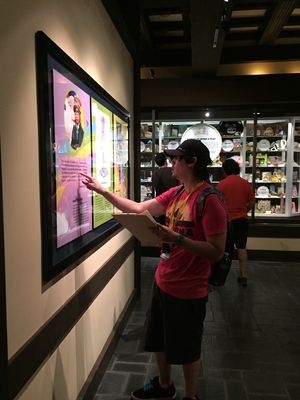 A display case in the Kawaii exhibit contains answers to the More Kittens quest. Photo by Stephanie Wien.

Two quests in the Japan pavilion's Kawaii exhibit provided teams with some relief from the heat outside, but many teams left these to the end of the day causing some crowded conditions at times. Another World Showcase quest used information found in the four adjacent pavilions of Norway, China, Germany, and Italy to build a word maze that teams navigated to spell out their final question, which was answered at the Outpost area of World Showcase near China. Teams familiar with the Impressions de France film in France may have been able to solve that quest without even sitting through the film, but for others it provided a nice break in air conditioning with comfortable seats.

The most visually creative quest challenged teams with a twisted garden hose maze. Teams used provided seed disks to match plant attributes with various types of cactus. The disks, when placed on the proper locations and aligned with the water flow through the hose maze, spelled out a final question that was answered in the nearby Water Wise Garden, a fitting complement to the Cactus Road Rally area. 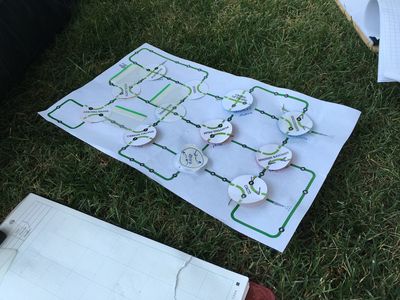 The hose maze for the Goddess of Spring quest nears completion. Photo by Stephanie Wien.

Full results, searchable by team, are available on the MouseAdventure website. The total possible points for this game was 650. The hidden quest was an additional 20 points, but no teams correctly answered it.

Best new teams: Midnight Madness Marauders and Pquizadactyl (Pquizadatyl were not marked as a new team ahead of the original award). 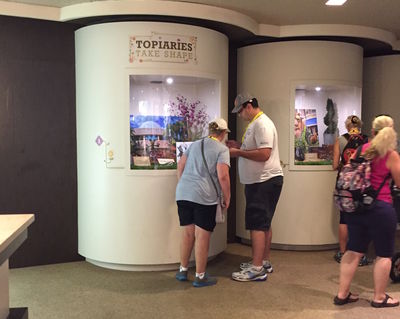 Conflicting Weenies are now eligible to become Masters if they win one more time. They previously won MouseAdventure World Explorers 5 in 2013 under the name WDW Lifestylers.

A full explanation of quests with answers is located on the MouseAdventure website.