The Art of Disney

I've written here a number of times about the wide range of merchandise available at Walt Disney World—everything from 50 cents for a pressed penny to that $37,500 crystal Cinderella Castle that you all know I want very badly. Today, I focus on shops that carry not the typical trifecta of T-shirts, mugs and key chains, but rather, "special" keepsakes.

The concept for the Art of Disney goes way back to 1955 and the opening of Disneyland in California. Within Tomorrowland, there was a shop called the Art Corner, which sold art-themed Disney collectibles such as postcards and art supplies. The main attractions at that shop, though, were actual animation cels and drawings used in producing Disney's animated features and shorts. These were the actual work products produced by the brilliant Disney artists who created these treasures.

Without getting into too much detail, a production cel is made by laying a blank sheet of acetate over an original artist's drawing, on which the image is traced and then painted. These paintings were then laid over backgrounds and photographed for use in the feature or short. In other words, you could watch the movie and see the actual cel image. I'm vastly oversimplifying the process, but the point is that these images actually appeared in the films.

These pieces of history that previously had often been discarded, were sold at Art Corner, in many instances, for under $1. Oh how I wish I had a time machine and could go back and buy them all.

Flash forward a number of years to the 1970s and 1980s and my own childhood visits to Walt Disney World. I was an early collector of all things Disney and browsed the many shops even then. On one particular visit, I remember a bin in the space that's now Memento Mori. It was filled with production cels that sold for roughly $90 each. My 10-year-old mind decided that spending my saved-up money on a lot of stuff was better than spending it all on one thing. Again, I wish I could go back in time and talk to that kid.

Now, it's 1995. I had seen more production cels over the years and on this trip, I was determined to finally buy one. I arrived all set to finally to make my dream purchase—and suddenly, there are no production cels to be found. Again to give a very brief history, after the Little Mermaid, the images used in animated features were done digitally, so production cels were no longer being created. Smart people had also scooped up the existing cels, so they became very hard to come by, even directly from Disney.

I was in despair, but all was not lost. I visited Art of Disney in the marketplace section of what was then newly named Downtown Disney. It was there that I saw Bernard, the main mouse from The Rescuers. It was a cute production cel from the film, featuring Bernard sitting and wearing a raincoat. It was a full figure image and exactly what I wanted (and the pause function on my DVD player allowed me to spot that point in the film). It was approximately $500 (groan along with me at the early price tags for these) and still hangs proudly in my home, a true piece of Disney history. 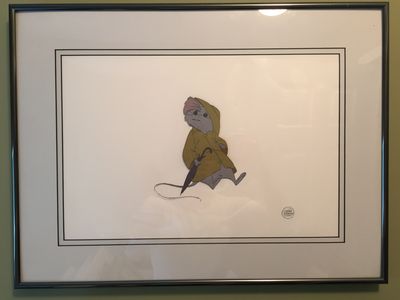 Bernard from "The Rescuers" is a real piece of Disney history hanging right in my home. Photo by Gregg Jacobs.

Today, while those production cels are only available on the secondary market at auction houses and on eBay, the Art of Disney concept is alive and well.

As I mentioned, I'm a big fan of all kinds of Disney merchandise—but these shops are the place to potentially get something truly special. Let's begin with the artwork. Disney has a wonderful collection of artists that they allowed to go a little wild to create some wonderful artwork with a Disney spin. These could include stylized depictions of Disney characters, park icons, or versions of our favorite scenes from Disney films. Note that this artwork comes in many different mediums in a wide range of prices. 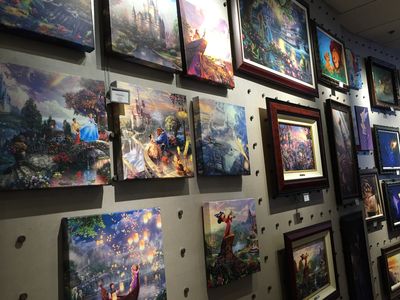 Artwork includes depictions of classic characters and Disney icons and well as images from Disney films. Photo by Gregg Jacobs.

It helps to understand the different types of artwork available:

One thing Disney does that's terrific is to actually bring the artists into the shops to do signings. These are fairly common and give you a great opportunity to discuss the artwork with the creators. They will also hand-sign the piece for you. I have several (OK, a lot) of these in my home, most of them from my personal favorite artist, David Doss, who does terrific images of Disney characters and Walt Disney World settings. 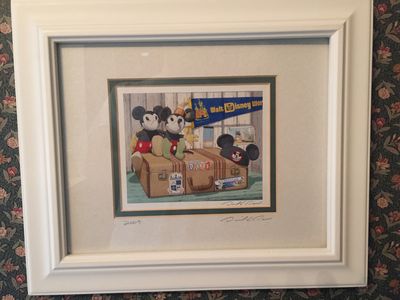 The Art of Disney Shops have many pieces of affordable artwork that you can get signed in person. Photo by Gregg Jacobs. 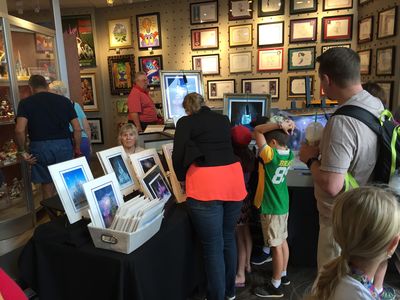 Artist signings are very common at Art of Disney. Photo by Gregg Jacobs.

Exploding the number of choices available is something called Art of Disney on Demand (currently available at Art of Disney at Disney Springs and Art of Disney in the Magic Kingdom). You can go to a kiosk and review hundreds of images so you can get exactly what you want. You can then choose the size, then choose a paper or canvas print, and whether you want to buy a frame (my advice is to skip the overpriced frame and visit your local Michael's or other arts and crafts store on a sale day to save a ton of money). They will then put together your artwork, which can be available in a matter of hours or shipped to whatever destination you select.

Moving on from two-dimensional artwork, one thing Disney has done in recent years is to link up with famous art makers to create Disney-inspired pieces. These currently include Lenox, Swarovski, and Precious Moments, among many others. Lenox, in particular, has produced a beautiful line of Disney figurines (Mickey and Minnie cake topper, anyone?).

Beyond the above, the store has a varying array of merchandise, including postcards of many of the same images as the artwork, holiday ornaments, puzzles (Thomas Kinkade, the painter of light, has a few images of Cinderella's Castle and other icons), beautiful picture frames, commemorative coins, and even needlepoint kits.

There are three Art of Disney locations at Walt Disney World and one semi-location.

The largest, both in size and selection, is located at Disney Springs in the marketplace section, across from the Disney Days of Christmas and very close to the resort bus stop. A distinguishing feature of this location is the large display wall of Art of Disney on Demand pieces. There are many characters and scenes represented in all sizes with framing examples. There are multiple kiosks out front for you to make your selection. 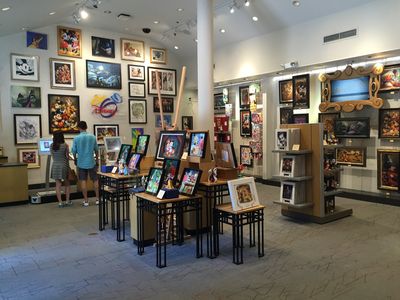 While this location also has a wide variety of the merchandise, this is the one to visit if you want to bring home a piece of artwork. There's a huge selection across the back of the store, including giclees, limited editions, and prints. This is also the best place if you want an original work of art. On a recent visit, there was a large original work depicting a stylized version of Pluto by artist Joe Kaminski, yours for $2,000. For those with a slightly smaller budget (meaning most of us), right next to it on the wall was a limited edition print of a similar image from the same artist for $395. 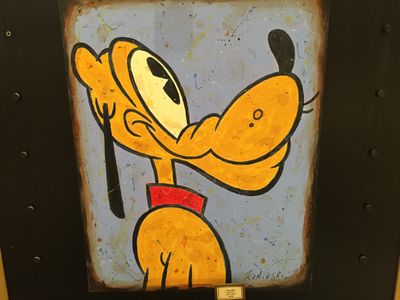 You can bring home an original piece of artwork. Photo by Gregg Jacobs.

There's a large animators desk at the store with hundreds of hand-drawn images of Disney characters. At certain times, an animator is available to do special requests.

There's also a large Art of Disney right on Main Street USA in the Magic Kingdom, located in the old Main Street Cinema (marquis still intact) and retaining the thematic elements of a theater. While this location has a sampling of all types of items including a great representation of prints, its focus seems to be more on figurines and other three-dimensional collectibles.

Disney Hollywood Studios does not have a standalone Art of Disney store, but there is a small selection of these collectibles available at the back of the Muppets shop, including prints and puzzles. 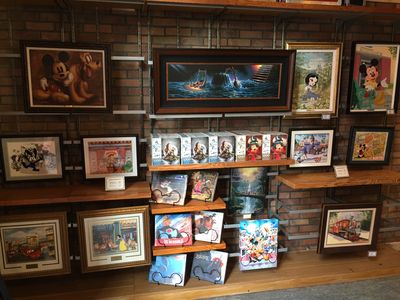 Disney Hollywood Studios has its own little Art of Disney area in the back of the Muppets shop. Photo by Gregg Jacobs.

Possibly my favorite of all is Art of Disney Epcot. It has a lot of the same selection as the other stores, but it just seems to have things I haven't found anywhere else. For example, years ago Chris Barry had written a Mouseplanet article ("Disney Stuff - Walt Disney World 40th Anniversary Mini Attraction Poster Set") describing a great purchase. He bought a box set of three miniature posters silkscreened onto tin with images of classic park attraction posters (the Haunted Mansion, the Enchanted Tiki Room, and the monorail). These were the days before the handy shop Disney parks app, so I searched frantically to no avail. Then I visited Art of Disney Epcot—and there it was. 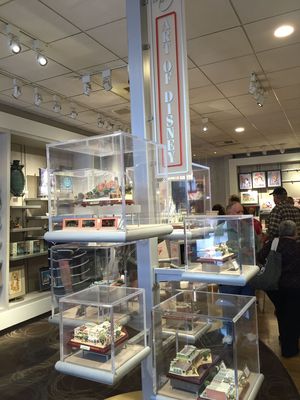 Art of Disney Epcot has a wide variety of merchandise, including some incredible finds. Photo by Gregg Jacobs.

I'd highly recommend taking a little time out of your Disney day and visiting these special shops. Whatever your desire or budget, there's likely something special that will speak to you and provide a great memory of your vacation long after you return home. Even if you don't walk out with anything, if you take some time to browse both those iconic and crazy images, I can guarantee you'll smile.

Shopping Tips of the Month

The key to acquiring some great signed artwork is right here on Mouseplanet. Check out the Walt Disney World Resort Update, which typically runs every Tuesday. In it, you'll see a listing of the times and locations of tons of merchandise signings, which go on all the time, primarily at Art of Disney at Disney Springs and Art of Disney Epcot.

If you like interesting artwork with a Disney twist, also visit the Wonderground Gallery within the Marketplace Co-op at Disney Springs. They have some great stuff as well.

Lastly, I'm providing a bonus picture for those who like to dream. 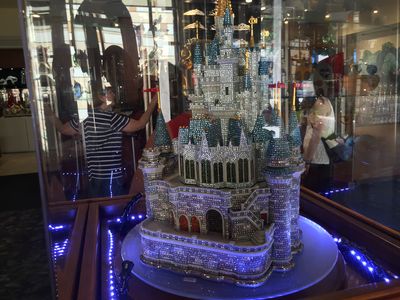 For only $37,500, this crystal covered Cinderella's Castle can be yours from Arribas Brothers. Photo by Gregg Jacobs.