While in college, I attended a performance of "Tamara" by John Krizanc. The play was staged inside Hollywood's American Legion Hall, a perfect setting for the interactive production. Rather than observe the performance from their seats, the audience followed a cast of 10 performers around the sprawling mansion as the play unfolded all around them. Members of the audience could follow an actor as he left a scene, stay in a room to see what happened next, or switch gears and follow a more intriguing character if they chose. The members of the audience each experienced a different version of the story depending on the choices they made. I was completely enchanted, and regret that I only got to see it once.

What does this have to do with theme parks? Absolutely nothing—but it probably explains why I find the new Ghost Town Alive experience at Knott's Berry Farm so compelling. Like "Tamara," Ghost Town Alive puts you into the middle of the story, as the citizens of Calico go about their day. There's mystery, mayhem, romance, politics, intrigue and crime, and a cast of characters ready to take you as deep into the action as you care to go. 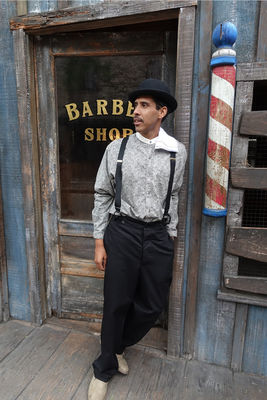 The Calico barber waits outside his shop for the next client. Photo by Adrienne Vincent-Phoenix. 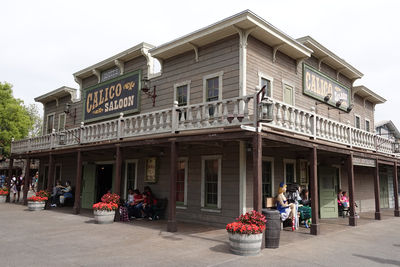 The Calico Saloon was renovated in preparation for the 75th anniversary of Ghost Town at Knott's Berry Farm. Photo by Adrienne Vincent-Phoenix. 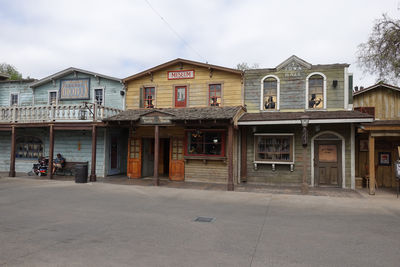 Many of the Ghost Town buildings have been refurbished, with special effects repaired or added. Photo by Adrienne Vincent-Phoenix.

Ghost Town Alive is part of the 75th anniversary of Ghost Town at Knott's Berry Farm, and the newly refurbished area looks fantastic. Many of the "peek-in" sets have been opened up to allow guests to walk inside the facades, and new effects were added around the area. In fact, I was looking at some of the new additions when I had my first encounter with a resident of Calico. The Doctor introduced himself and said he was new in town. He said he was looking into reports of paranormal activity around town. A thick notebook was filled with his careful notes and sketches. 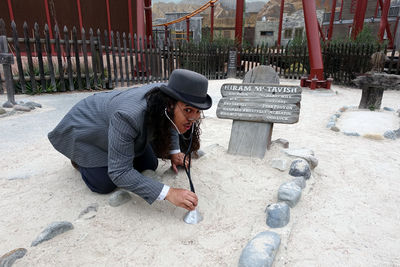 The new doctor in town performs a very thorough examination of a grave. Photo by Adrienne Vincent-Phoenix. 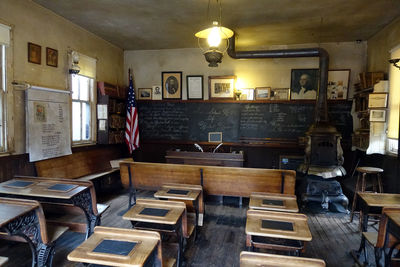 Visitors to Calico can now walk into the schoolhouse, and possibly meet the teacher. Photo by Adrienne Vincent-Phoenix. 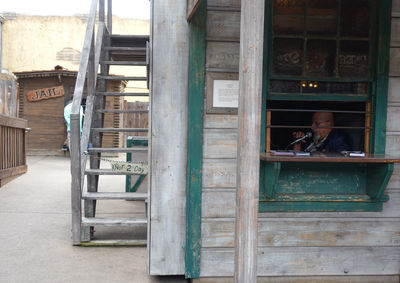 Sad Eye Joe is still incarcerated in Ghost Town. Unsuspecting visitors to the jail don't realize that Joe can see and talk to them. Photo by Adrienne Vincent-Phoenix.

As we talked, the Doctor suddenly became very flustered, and pointed out the lovely School Teacher at the one-room schoolhouse across the way. He confided that he'd been working up the courage to ask her to that evening's Hoedown, but he was afraid she'd reject his advances.

This is the point where I cast myself into this little drama—but not in the way you're likely expecting. It would seem obvious that the good Doctor would ask someone to talk to the School Teacher and see how receptive she might be to his invitation, and perhaps he asked that favor of another guest. That's not a task I wanted, and so I took the story in a different direction.

I demanded to know if the Doctor was marriage-minded, and if he realized that the School Teacher would have to give up her career to marry him. Did he feel it fair that his future wife be required to abandon her own vocation in support of his? Together we went into the schoolhouse, where I pointed out the posted Rules for Teachers. Item 6: "Women who marry or engage in unseemly conduct will be dismissed."

The Doctor expressed his shock at this discovery, and suggested that perhaps the law could be changed to permit the lovely School Teacher to keep her position after marriage. Had I met Mayor Parnell yet? Would I be willing to take my proposal to him for consideration?

The Doctor led me to Town Hall, where we learned that the Mayor was out at an important meeting. However, Mrs. Parnell was busily welcoming new citizens to Calico; I later learned that one had to become a citizen before one could vote in the election, which was to be held later that day. Mrs. Mayor dutifully wrote down my proposal, and said she'd give it to her husband upon his return. 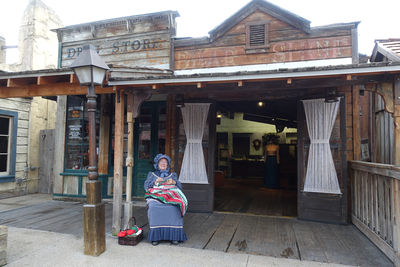 A shopkeeper passes time on the porch outside the Calico department store. Photo by Adrienne Vincent-Phoenix. 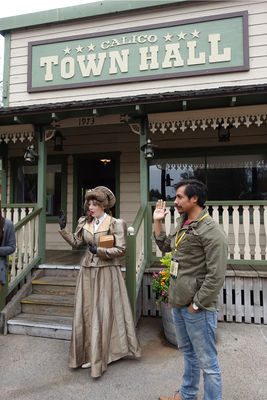 As we chatted outside City Hall, other park guests filtered through Ghost Town on errands for various characters. The Telegraph Operator sent one group to find the Sheriff, and bring him news of a band of robbers in a nearby town. It was early in the day, and this was the first warning about what would escalate into a day-long drama that would include a train robbery, a bank robbery, a rooftop shoot out, and eventually, a contested election to choose a new mayor of Calico. 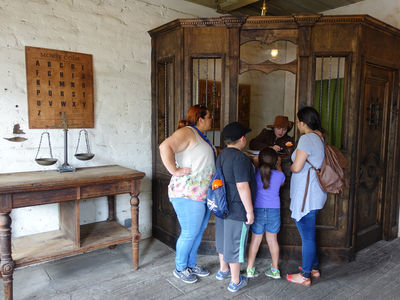 Young visitors deliver a telegram for a resident of Calico. Photo by Adrienne Vincent-Phoenix. 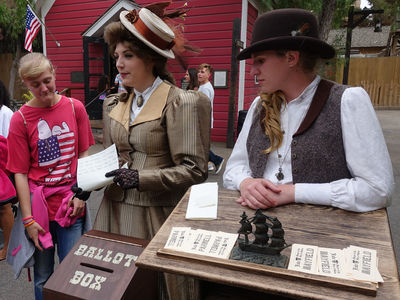 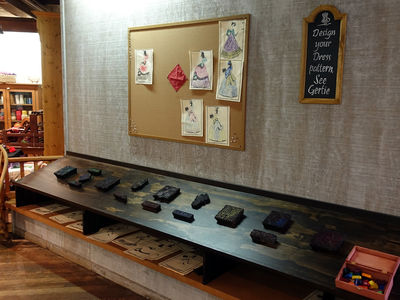 Gertie's shop offers young designers the chance to customize a dress or create a hair bow. Photo by Adrienne Vincent-Phoenix. 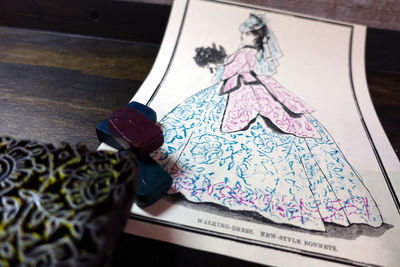 Young artists can use supplied materials to design a gown for the hoedown. Photo by Adrienne Vincent-Phoenix.

The story incorporates the live entertainment scheduled throughout the day in Ghost Town, ending with the nightly hoedown. Younger visitors can become part of the story by visiting the barber for a free drawn-on mustache, or stopping by the General Store to design dresses for the hoedown. And of course, there's the blacksmith shop, which adds a touch of realism to the town. 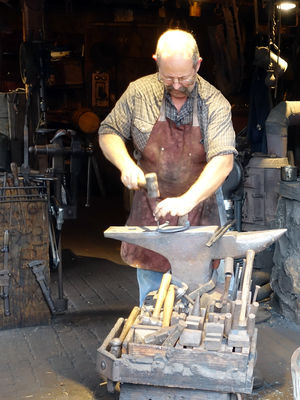 No Western town could be complete without a blacksmith shop. Photo by Adrienne Vincent-Phoenix. 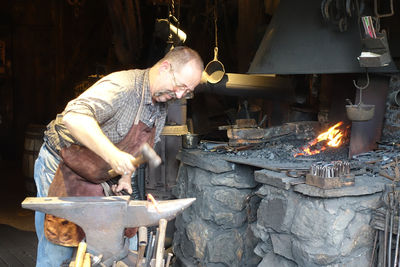 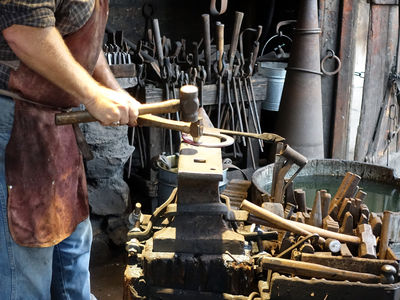 The blacksmith creates a personalized horseshoe for a Ghost Town visitor. Photo by Adrienne Vincent-Phoenix.

The characters I watched did a great job interacting with the audience, drawing them into the story where warranted, or sending them on an "errand" to keep things flowing. The whole thing is really well done, and I was disappointed that I had other obligations that kept me from spending the day in Ghost Town to watch it all play out.

If you're a Disneyland regular, you might be asking, "wait, didn't Disney already do that with the Legends of Frontierland last summer?" Not really. Legends of Frontierland was a big interactive game, with tasks and rewards that led to one side or the other "winning" the day. Ghost Town Alive is much more about the experience and interactions with the townsfolk. They're different experiences, but truth be told, I far prefer what Knott's came up with. 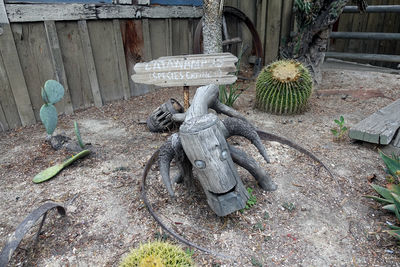 The Catawampus, an unofficial Knott's mascot, has returned to Ghost Town. Photo by Adrienne Vincent-Phoenix.

During my visit to Knott's Berry Farm, I had a chance to check out some of the other enhancements and additions. Here's a quick overview of what may be new or different since your last visit.

Winding out of the park and into the adjacent parking lot, GhostRider is the first ride many visitors see and hear as they enter Knott's Berry Farm. Billed as the "longest, tallest and fastest wooden coaster on the West Coast" when it opened in 1998, GhostRider had not aged well, becoming rougher and more bone-jarring as time passed. 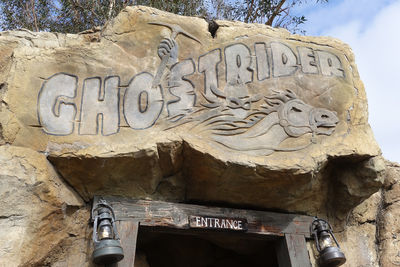 Knott's closed the wooden roller coaster last fall to begin a refurbishment which included replacing the entire 4,533-foot track, replacing the ride vehicles and eliminating a mid-ride brake zone. The newly reopened coaster is significantly smoother than before, and much less likely to prompt a visit to the chiropractor.

The refurbishment did not increase the ride's capacity, however, so be prepared to wait in a long line, or splurge for the FastLane pass. 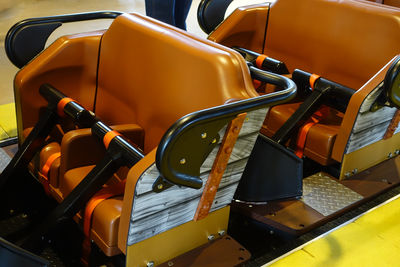 GhostRider trains were replaced during refurbishment. Photo by Adrienne Vincent-Phoenix.

After being relocated to make way for the GhostRider queue, the classic panning for gold attraction is back near its original location at Knott's Berry Farm. The price has gone up significantly since I first tried my hand at prospecting, but there's something satisfying about dipping your hands in the water and swirling a pan around and around to uncover the tiny flecks of real gold in the sand. A helpful prospector guides you through the process, and will carefully funnel your findings into a clear vial so you can impress your friends. Don't worry about a bad claim—the miners make sure that everyone takes some gold home with them. 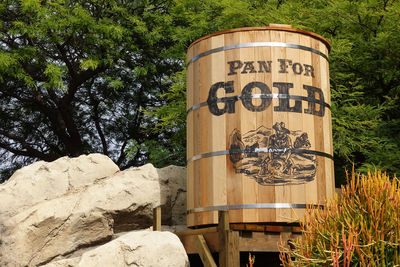 The Pan for Gold attraction has moved back to its original location at Knott's Berry Farm. Photo by Adrienne Vincent-Phoenix. 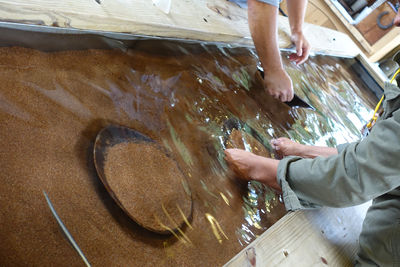 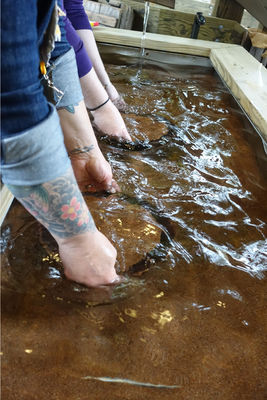 Proper technique is crucial to separate the sand from the golden flakes. Photo by Adrienne Vincent-Phoenix. 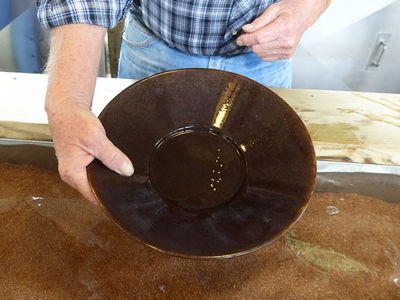 It's a lot of work to recover a few small flakes of gold. Photo by Adrienne Vincent-Phoenix. 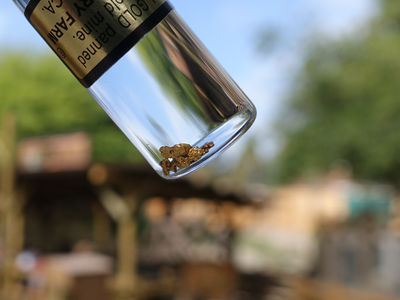 If you grew up in Southern California, the odds are good that you found yourself waiting in line at Mrs. Knott's Chicken Dinner Restaurant anytime you had family visit from out of town. Folks came for the fried chicken and biscuits, and never seemed to mind that the carpet was looking a little shabby, the plates didn't quite match, and the decor seriously dated. 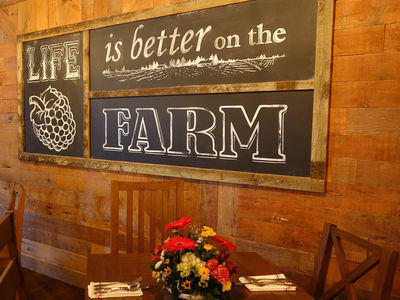 Mrs. Knott's Chicken Dinner Restaurant reopens with a new look and the same menu of classics. Photo by Adrienne Vincent-Phoenix. 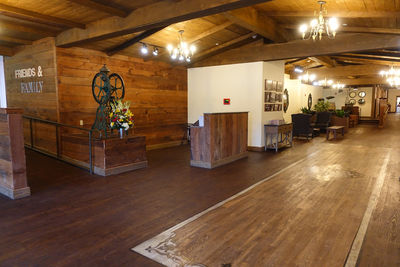 The new lobby offers room for more people to wait for their tables. Photo by Adrienne Vincent-Phoenix.

Since my last memory of Mrs. Knott's included dusty silk plants, whitewashed lattice and a decorative fountain with a misaligned nozzle, I was completely stunned when I walked into the newly renovated restaurant on the day of its official grand reopening. Knott's managers closed the restaurant for more than four months to completely redesign the space, and it is an incredible transformation. The lobby is larger and inviting, with warm wood that glows under golden light fixtures.

The original dining room opens off the lobby, a piece of Knott's history carefully preserved and updated. The former garden room has been replaced by a new bar, featuring boysenberry-spiked cocktails alongside more traditional offerings. To make up for the tables displaced by the new bar, Knott's built a new outdoor seating deck. The dining rooms all carry a farmhouse theme, but with an industrial aesthetic in place of Calico curtains and ceramic chickens. Tin ceiling tiles and white chairs with a hand-rubbed finish brighten up the spaces. 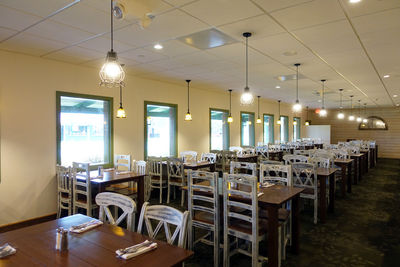 The original dining room was preserved and updated during the renovation. Photo by Adrienne Vincent-Phoenix. 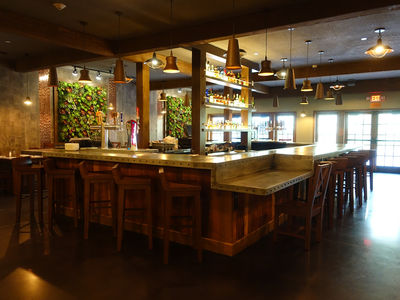 Unseen to diners, the kitchen was redesigned and updated to improve food quality and service time. Traditionalists need not fear, all of the classic menu items are unchanged. The fried chicken (1 million pounds served per year), pot pies and stewed rhubarb have been joined by a few new menu items, including chicken sliders.