My family and I are proud, card-carrying members of Disney's Vacation Club (DVC, Disney's timeshare program). We bought into DVC when my son was young, as our pledge that no matter how hectic life became, we would vacation together as a family. DVC has been a wonderful investment for our family, and has encouraged us to explore all the wonderful types of family vacations that Disney has to offer.

On our first visit, we watched an outdoor movie, and made a shark tooth necklace with a very enthusiastic cast member. On our next visit, a bit older, my son played capture the flag with a big group of guys, and had a blast. Every summer, despite all the great activities we've participated in at Disney's Vero Beach, there has been one activity my son has desperately wanted to participate in, but hasn't been quite old enough for—surfing lessons. An avid boogie boarder and swimmer, my son first began dreaming of riding a real wave when he was six on a family trip to California. We drove from San Francisco to Los Angeles on the Pacific Coast Highway and frequently pulled over to visit different beaches and watch the surfers, stunned by their skill. This past summer, at long last, my son was finally old enough to enroll in surf school at Disney's Vero Beach. 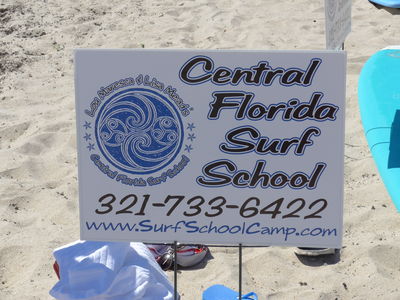 When we signed up, the class was offered at 8:45 on Wednesday mornings for Disney's Vero Beach resort guests. We signed up at Eb and Flo's Rentals (the desk near the pool where guests sign up for activities). The class ran until 12:45, and cost $95 for DVC members and $100 for non-DVC resort guests. All equipment (in this case the surfboard) was included. The surf lessons took place at nearby Pepper Beach Park in Fort Pierce. Van transportation was provided free of charge to the beach from Disney's Vero Beach for those who were interested, but my husband and I wanted to check out Pepper Beach for ourselves while my son had his lesson, so we drove separately. 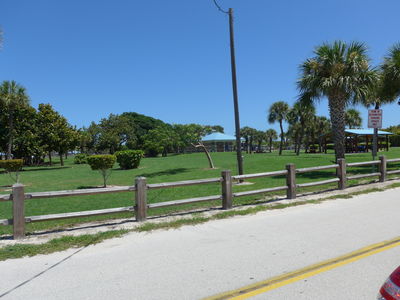 A bit of the scenic ride on the way to Pepper Park Beach in Fort Pierce where Central Florida Surf School offers lessons. Photo by Donna Fesel. 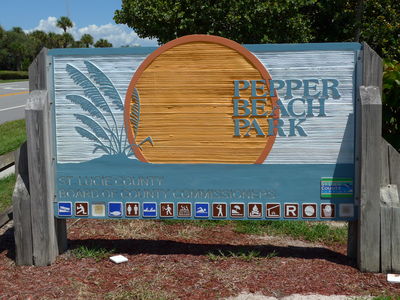 The sign lets you know you've arrived at Pepper Park Beach for a wonderful surf lesson. Photo by Donna Fesel.

Lisa Mead was my son's instructor, and had a wonderful commanding presence. As soon as we met her, and she explained the lesson our son would participate in, we felt confident in her ability to both teach our son how to get up on a surfboard, and more importantly, how to remain safe. His group had one other child and two adults, all beginners. The first part of the course—about half an hour—was about safe surfing and water safety. This part took place at a cabana area before even setting foot on the beach.

Next, the class learned to carry their boards, and learned both positioning on the surfboard and how to "pop" to a standing position; they practiced this skill repeatedly until Ms. Mead was confident the group was ready to enter the water. The group stayed together with Ms. Mead by their side, each student taking their turn popping to standing on his or her board. After that, each student tried to ride the wave in. 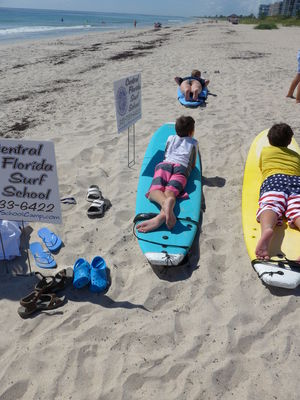 The students at the Central Florida Surf School learn board positioning at Pepper Park Beach. Photo by Donna Fesel. 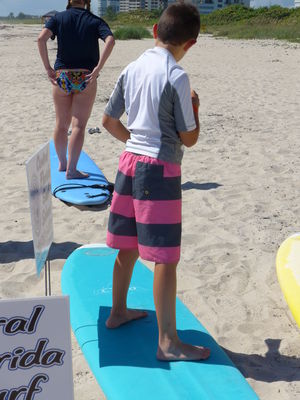 My son learns to "pop" to a standing position on his surf board at Central Florida Surf School. Photo by Donna Fesel. 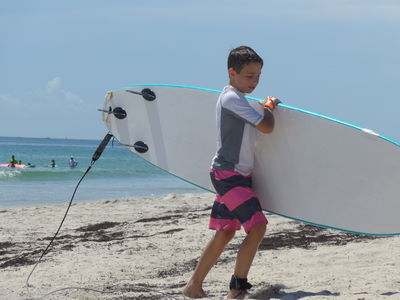 My son learns to carry his surfboard during his very first surfing lesson. Photo by Donna Fesel.

I watched from the beautiful beach with my husband as our son paddled out on his board. With Ms. Mead's coaching, he popped to standing and rode the very first wave he caught—okay for a second or two—and then he fell over into the water, but the triumphant smile on his face said it all. He rode a few more small waves that morning, clearly having the time of his life. At about noon, the class concluded. Exhausted, our son poured himself into our car for the trip back to Disney's Vero Beach. He said learning to surf was everything he thought it would be, and said he absolutely couldn't wait to ride his next wave. 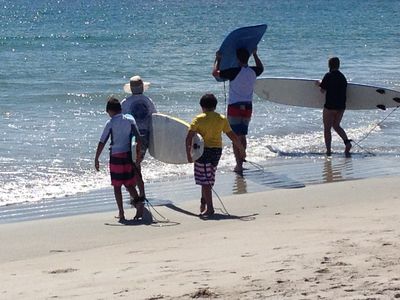 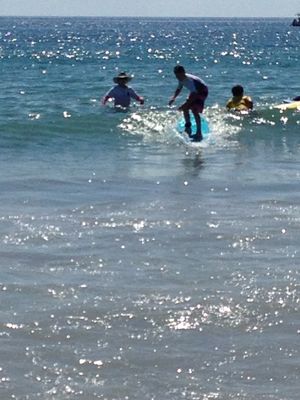 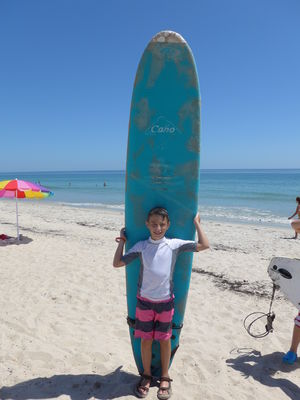 Central Florida Surf School, with their patient and knowledgeable instruction really seemed like a perfect partner for Disney. They also teach privately upon arrangement; I'd highly recommend them. Who knows, maybe next time I'll get on a board.