What Would a 1971 Walt Disney World Vacation Cost?

Many things have changed over 45 years. Certainly, the cost for products and services have elevated greatly due to inflation, increased costs for material and labor, and upgrades, among many other things.

Certainly this has been true at Walt Disney World, especially with premium prices being offered for everything from preferred parking to seating for fireworks without many people blinking an eye at the added cost. Today, a one-day adult admission to the Magic Kingdom is well more than $100, plus another $20 for just general parking.

In October 1971, an adult admission to the park for one day was $3.50 (plus additional cost for tickets to individual attractions) and $0.50 for all-day parking. Even with the cost of ride tickets and food, the entire day might cost less than $20, which was still a sizeable price, but not un-doable.

To put that in better perspective, in 1971 a movie ticket cost $1.50, gas was $0.40 a gallon, a Malibu Barbie doll was about $2, and postage stamps were $0.08. Basically, the cost of admission to the Magic Kingdom was the same cost as buying about three gallons of milk at the local grocery store.

I am old enough to remember when candy bars were three times the size they are now, and only cost a nickel, and I could buy a comic book for a dime. I am smart enough to realize that those prices will never return even as a short time anniversary promotion. However, it certainly seems that Disney prices have exceeded the natural increase.

Walt Disney World (WDW) has raised its prices more than 40 times since the park first opened, but it has not slowed the flood of attendance. Roughly, since WDW's opening in 1971, the admission price has increased 2,900 percent, whereas the average inflation for other things from 1971 show only about a 392 percent change in cost.

Basically, former CEO Michael Eisner felt that the cost for a one-day admission to a Disney theme park should be the same price as the cost of a ticket for a Broadway play. Thank heavens he didn't feel it should be the same cost as what scalpers were charging for Broadway tickets to popular shows. 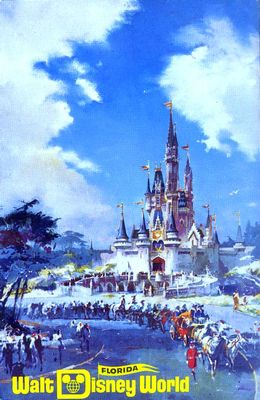 A guest had the option to buy the special "Vacation Kingdom" package that included accommodations for three nights at either of the two WDW Resort hotels, four days of unlimited use of the WDW transportation system, four admissions to the Magic Kingdom, 28 Theme Park Adventure ticket coupons good for any of the attractions, and $30 worth of recreation coupons. (Total cost was Adult $90, Junior $36, and Child $35.50)

Those were bargain prices when you took into account the individual costs for each item in the package. Room rates at Disney's Contemporary Resort ranged from $28 to $44 per night, with the rates at DIsney's Polynesian Village Resort slightly less. No extra charge for children under the age of 18 occupying the same room as an adult.

The Magic Kingdom was the only theme park, with the opening of EPCOT still a decade away.

An "A" ticket ($0.10) was good for a one-way ride on Main Street's Omnibus, Horse Cars, or other Main Street vehicles. Or you could choose a spin on Cinderella's Golden Carrousel in Fantasyland.

A "B" ticket ($0.25) was good for a visit to the Main Street Cinema, Frontierland's Shootin' Gallery, Mike Fink Keelboats, or Adventureland's Swiss Family Treehouse.

A "C" ticket ($0.50) was good for Tomorrowland's Grand Prix Raceway; Fantasyland's Dumbo the Flying Elephant, Peter Pan's Flight, Snow White's Adventures, Mr. Toad's Wild Ride, or Mad Tea Party; or Frontierland's Davy Crockett's Explorer Canoes (that closed at dusk with a reminder of that fact on the ticket itself, to avoid disappointing guests).

An "E" Ticket ($0.80 to $0.90) was good for Fantasyland's "it's a small world," The Mickey Mouse Revue or 20,000 Leagues Under the Sea Submarine Voyage; Adventureland's Jungle Cruise, Tropical Serenade (name changed in September 1972 to Enchanted Tiki Birds and dropped to a "D" ticket); or Liberty Square's Haunted Mansion.

Walt Disney World was not just a larger theme park, but an entire vacation kingdom so there were multiple recreation opportunities as additional costs:

All prices subject to change without notice.

Yes, back in 1971, people also complained at how expensive a Walt Disney World vacation trip was, but all agreed that they got top value for their money. This was only Phase One of the plans for the property and guests were eager to see all the additions that were promised to appear by 1975.

Unfortunately, the gas crisis in 1973, when Arab countries declared an oil embargo, made a visit to WDW much more expensive. That scuttled many of the announced additions to the property as attendance dropped significantly.