Guardians of the Galaxy Ride Coming to Disney California Adventure

Marvel Studios' presentation at the 2016 San Diego Comic-Con provided a receptive audience for an announcement that is likely to cause some gnashing of teeth and rending of garments in other fan circles. Saturday night, Kevin Feige, President of Marvel Studios announced that a new attraction based on the popular Guardians of the Galaxy films will open at Disney California Adventure park in the summer of 2017. 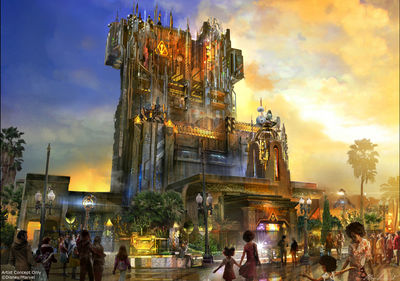 Guardians of the Galaxy – Mission: BREAKOUT! is scheduled to open in Disney California Adventure in Summer 2017. Photo © Disney.

Guardians of the Galaxy – Mission: BREAKOUT! will replace the Tower of Terror attraction, which is scheduled to close in January 2017. Based on the description and concept art shared by Disney, the new ride is something of an overlay onto the existing Tower of Terror ride, with the Hollywood Tower Hotel structure transformed into a fortress owned by Tanaleer Tivan, the Collector.

Disney provided a brief description of the new attraction from Joe Rohde, Portfolio Creative Director, Walt Disney Imagineering, who is in charge of the transformation:

"The setting is a kind of fortress that's owned by the mysterious Collector and it's packed with creatures and his latest acquisitions from across the universe. Now he has imprisoned the Guardians of the Galaxy and they're hanging in display cases over a giant abyss. The captor doesn't know it but Rocket Raccoon has escaped and is enlisting our aid—all the guests—to help the Guardians in a breakout scheme. And the rest is comical chaos; a very funny, very irreverent story and a really wonderful addition to Disney California Adventure."

Rohde also penned an article for the Disney Parks Blog to share more about the new ride. At the Comic-Con panel, Marvel said that the cast of the Guardians movies, including Benecio del Toro, were involved in the creation of footage to be used in the new ride. 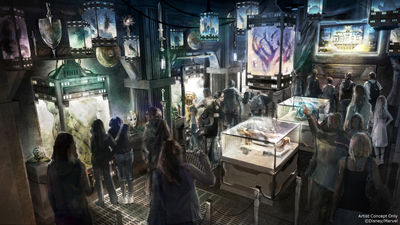 The current Hollywood Tower Hotel building will be transformed into The Collectors' Fortress. Photo © Disney.

The elevator shafts are referred to as "gantry lifts" in the new attraction. Disney says, "Guests will experience multiple, random and unique ride profiles in which the rise and fall of the gantry lift rocks to the beat of music inspired by the film's popular soundtrack." Fans who have been asking when the random drop sequences would be added to California's version of Tower of Terror (the Florida version added them in 2013) now have their answer. 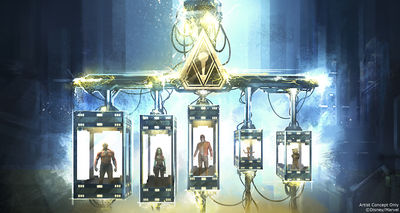 The Guardians of the Galaxy will star in the newest Disneyland Resort attraction. Photo © Disney.

Movie sequel Guardians of the Galaxy Vol. 2 debuts May 5, 2017, providing a nice promotional hook for the new attraction's grand opening.

Disney's press release states that the new ride will "anchor a broader universe of Super Heroes that will grow over time in Disney California Adventure Park." That isn't confirmation of a Marvel Land expansion as some have hoped, but it's a sign that Captain America and Spider-Man will eventually have even more company at DCA.

Rumors of this replacement have been floating around Disney fans sites for months, and some people are really quite unhappy about the plans. It's hard to know if this confirmation and the newly released concept art and details will change any deeply-held convictions.

For those who are truly upset about this, I pose this question: Is it really so bad if California's Tower of Terror closes, so long as the original—and vastly superior—Walt Disney World version remains open and unchanged?

If you've been on both rides, you know what I'm saying. Walt Disney World got the 5th Dimension, and Disneyland got the shaft.

With this project, Disney will replace a lesser copy of a truly iconic attraction with something that at least is exclusive to the West Coast. The ride system won't be any different, but the theme and story can't be replicated in Florida, due to its complicated Marvel licensing agreement.

So many people complain about Disney's current work to build identical Star Wars Land projects at Disneyland and Walt Disney World. Here's a time when Disney is actually reversing that trend. When the ride impacted is the duplicate Tower of Terror, there's no real downside for Disneyland.