Our Disney-loving family recently made a trip to the new Great Wolf Lodge in Southern California. Located just a few blocks south of Disneyland on Harbor Boulevard, this facility offers one thing that Disneyland currently lacks: A water park.

As far as I am concerned, Walt Disney World has set the bar for water parks. So I went into this experience a little biased, unfortunately for Great Wolf Lodge. During our overnight stay, I found myself comparing it to the two Walt Disney World water parks (Disney's Typhoon Lagoon and Disney's Blizzard Beach) and judging the theme, food, atmosphere, and attractions accordingly.

From the outside, the Great Wolf Lodge looks pretty impressive. The hotel contains about 600 rooms and is connected to the water park building via the lobby area. Once inside, I was excited to check everything out. The theme of a woodland lodge was very well done, with lots of open space in the lobby area. The main floor is home to the front desk, a store, two restaurants, and an area used for story time and kids activities, as well as a window with a view of the indoor water park. Downstairs, there are two more stores, arcade/mini golf course/4-D movie theater, as well as a quick-service pizza place, ice cream/bakery shop and a Dunkin’ Donuts. The rooms were nice, and pretty spacious as far as standard rooms go. Although our view to the west was less than spectacular, the boys were excited to see a familiar site in the distance: Mickey’s Fun Wheel at Disney California Adventure and the Paradise Pier Hotel (there is a shuttle that will take you to Disneyland Resort for $5 per person 10 years of age and older, and $2 for 9 and younger, unlimited). 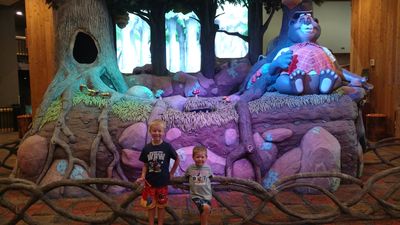 The main floor has a very relaxing forest theme. Photo by Lisa Maulhardt.

While we were there, we ate at five of the seven food places. We ate dinner at the Lodge Wood Fire Grill. Although I was a little worried about it being pricey food, we ended up spending about as much as we would have at a sit-down restaurant at any theme park. I was pleasantly surprised with how good the food was, After a round of mini-golf, we stopped at the Dunkin’ Donuts for some dessert. The next morning, we ate at the Loose Moose Family Kitchen, which is a buffet restaurant, for breakfast. Again, prices were comparable to any other theme park buffet and the food was enjoyable. It also had a much shorter line than Dunkin’ Donuts that morning. For lunch, we split up and got a couple slices of pizza from Hungry as a Wolf, and some chicken fingers and fries from Buckets Incredible Craveables. It was about as good as one could expect from quick-service theme park food.

Now, on to the water park itself. Unfortunately, the main attraction didn’t fare as well, in my opinion, as the rest of our experience. New guests are allowed to check in as early as 1 p.m. on your arrival day to use the water park, although your room may not be available until as late as 5 p.m. With that said, have a bag packed with just your swim gear so you can change in the changing rooms when you get there. Checkout time is 11 a.m., so, again, you should have a bag of clothes with you to change into, after you take your suitcases to your car. You get use of the water park for as long as they are open on your check-out day. One nice perk: Parking for one vehicle is included in your stay.

At first look, the facility looks huge. With most of the water play indoors, it is nice to not have to worry about sunscreen, hats, shade or hot sidewalks. Towels are free and abundant. Lockers are available for a fee of $15 or more depending on what size. When you arrive, if your room isn't ready, you either have to get a locker for your valuables, or leave them in your car.

There were two things that I noticed first-off going into the water park. One: It is loud. With it being an indoor facility, the noise of the water and all of the people playing is quite loud. After a couple hours of being in there, I was ready for a quiet place to sit. Second, without shoes on, the floor can be really slippery. Looking a little closer, there are some areas that appear to have a sandy texture in it, but the main walkways are slick, almost as if the original floor was made to be non-slip but it has already been worn down in the 4 months that it has been open.

As we walked in, we were stopped so my boys could be measured and given wristbands that were color coordinated for their height. I wasn’t expecting limitations, having looked at the website's list of rides and not seeing any height requirements listed on the ride descriptions. But, there they were, on the signs for each ride. (Upon closer look, the information is available by clicking on the "View Safety Rules" link for each ride). My 4-year-old is on the shorter side of kids his age, so he was very limited in what he could do. 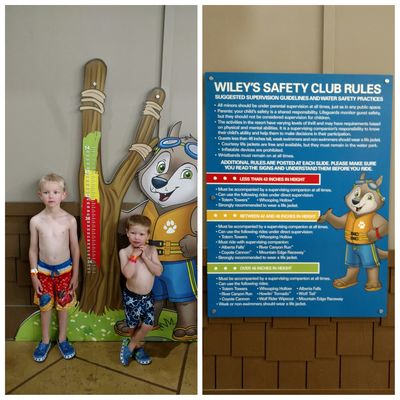 The number of height restrictions was disappointing for my kids. Photo by Lisa Maulhardt.

The boys were excited to check out the tall tower of slides designed for kids. As we started to go up to the line for the first set of slides, we were soaked by kids shooting the water guns off of the landing towards the top. Now, I understand the whole point of being there is to get wet, but I could do without kids shooting me and my kids in the side of the face every time we went up to get in line. The main tower has several slides of different sizes that appeal to kids of all ages. There is also a toddler pool area that my 4-year-old was a good size for, but my 6-year-old was a bit too big. With 3 little slides and a playground to climb on, it is perfect for those kids who aren’t as comfortable in the water. 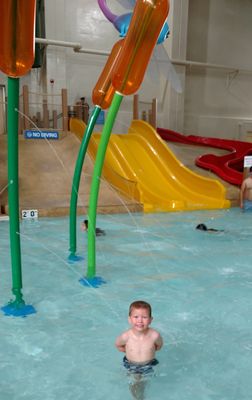 The toddler pool area is perfect for young swimmers. Photo by Lisa Maulhardt

Our next stop was the wave pool. My kids are both decent swimmers, so we waded in with them. The lifeguards soon stopped us and told us that both of them needed life jackets to be in the wave pool based on their wristband color (not on their ability to swim). We went over to the rack of life jackets that they provide, but had a hard time finding some that were the right size for my boys. We had to put on sizes that were a little too big for each of them, which made it really hard for them to swim in the wave pool. I personally found the water to be a little bit cold, as did the kids after a couple rounds of waves. But, the overall air temperature in the building is comfortable, so we weren’t cold when we got out of the water. 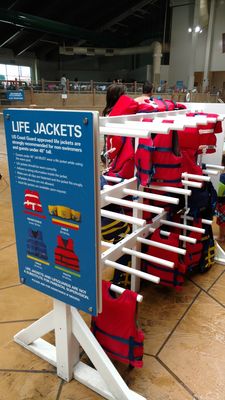 Life jackets are provided, but sizes may be hard to come by later in the day. Photo by Lisa Mauhardt.

After checking out those parts of the park, we went over to where all of the tube/mat slides are. Once we got to the bottom, we saw that my youngest was not tall enough for any of them. We were very disappointed, especially since the mat slide is almost exactly like a combination of the Snow Stormers and Toboggan Racers slides in Blizzard Beach. My son did both of those rides 2 years ago in Walt Disney World, right before he turned 2! And now, he was being turned away because he wasn’t tall enough. We also couldn’t do the family-raft-style ride because of his height. Again, he had been on similar rides in Walt Disney World two years ago. That part was extremely frustrating and disappointing. So, we had to take turns going on the tube rides with my 6 year old, while my husband and I switched off staying behind with our 4 year old. 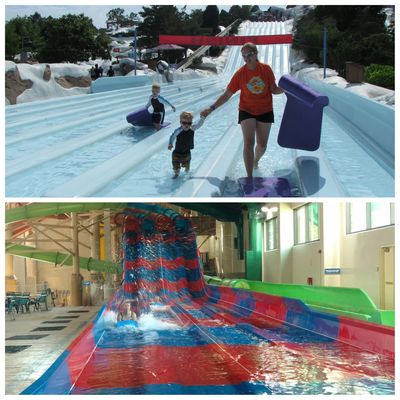 Although he was able to do the slides at the Walt Disney World Resort two years ago, my youngest was not able to do these at Great Wolf Lodge. Photo by Lisa Maulhardt.

The way that the tube rides tower is set up is a little confusing. There are several different lines for the different rides, but it is not easy to figure out your first couple of times up. Without knowing the name of the ride you are trying to get on, or knowing which color paw print that particular ride is associated with, it isn’t easy to find your line. At the bottom of this tower is a “lazy river.” It was too small, overly crowded, hard to find tubes, and cold. So, we didn’t spend a lot of time in there.

One of the rides gives Summit Plummet in Blizzard Beach a ride for its money. The Wolf Tail is not a very tall slide (it starts on the top floor of the tube slides tower), but it is a true free-fall experience. You have to stand in a chamber with your back against the wall. After the door closes, you get a countdown, and then the floor collapses under you. That one certainly got my heart going! We also enjoyed Wolf Rider Wipeout. The continuous wave gives you a chance to boogie board (or at certain times of the day, surf) on a continuous wave. We did that one first thing on our second day, as the line gets very long throughout the day. 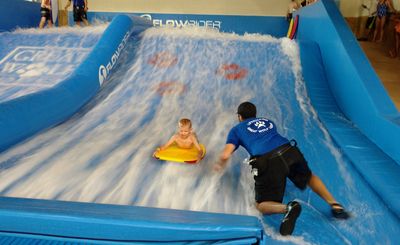 I was proud of my oldest for trying Wolf Rider Wipeout. It gives you the feeling of catching an endless wave. Photo by Lisa Maulhardt.

There is one indoor pool area to swim and play in that also has a lily-pad crossing area and basketball hoops. As with the wave pool, I found the water to be a little on the cold side. There is a small outdoor section of the park that has a similar pool, but we didn’t want to bother with sunscreen, so we stayed indoors. The Grizzly Jack’s Bar and Grill was also located outside.

Overall, my kids had a fun time at the Great Wolf Lodge. For me, I was disappointed by the water park area, but appreciated the theme of the lodge. For the price of one night in the hotel, we got several hours of water park play. However, I went in with very high expectations and was disappointed. I was hoping that it would scratch the itch that I have for wanting to be at a Walt Disney World water park this summer, but it certainly fell short of that. With that said, it was no surprise that we made a stop at Downtown Disney on our way back home. 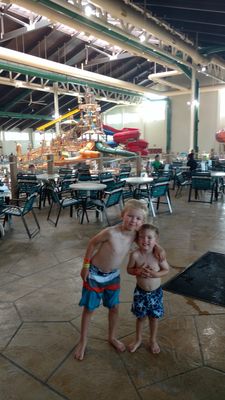 Despite my disappointment, the kids had fun. Photo by Lisa Maulhardt.

One thing to note: The pictures on the Great Wolf Lodge website for the Southern California attractions were not taken at this park. Several of the pictures depict things that are not in the SoCal park.