Check-in and the Rooms

The Customs House is the check-in and guest services area for Caribbean Beach Resort. Unlike most Disney hotels, this area is in a building separate from the food court and other guest facilities. Photo by Donald Fink.

This Standard View room is one of the most economical at Disney's Caribbean Beach Resort. It follows the general pattern of rooms at many of the other Moderate hotels on Disney property with decor specific to the Caribbean. Photo by Donald Fink.

Also known as Centertown, Old Port Royale is the central location where various amenities are found including the food court, market, video arcade, and Shutter's Restaurant. The food court, called Market Street, is separated into several smaller venues, each specializing in a particular style of food. For example, during breakfast, one shop might have eggs and meat while another has mostly pancakes and waffles.

We found the food in this food court to be reasonably good. Actually, we believe that the food in the food courts at all Disney hotels has improved over the years, and this one was no different.

Outside Market Street is where you can find a large swimming pool called Fuentes del Morro. It's patterned after a colonial Spanish fort typical of many found in the Caribbean. There is a main pool area along with a children's play area and two spas capable of holding twelve people each. Along side the pool is a bar, called Banana Cabana. 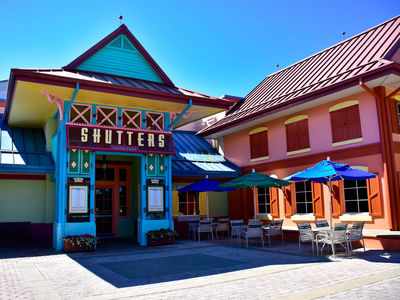 Near the food court is Shutters, a restaurant that offers sit-down dinner in case the many choices in the food court leave you wanting for more. Shutter's offers dishes familiar to the American cuisine with a Caribbean accent. Photo by Bonnie Fink. 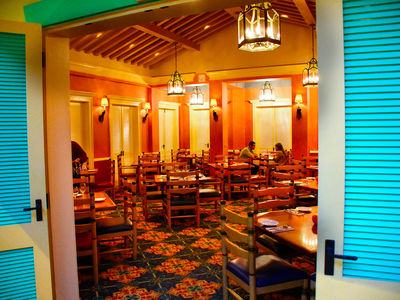 Inside Shutters is warm and friendly. This dining room is adjacent to the kitchen where you can see the chefs preparing your meal. Photo by Donald Fink. 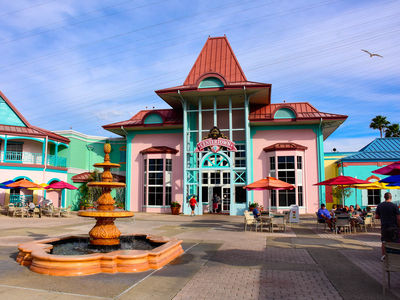 Old Port Royale resembles a mythical Caribbean town. Barefoot Bay is behind the camera in this image while we look on at the town square. The Centertown indoor mall is straight ahead with the food courts, general store, gaming arcade and so on. Photo by Donald Fink. 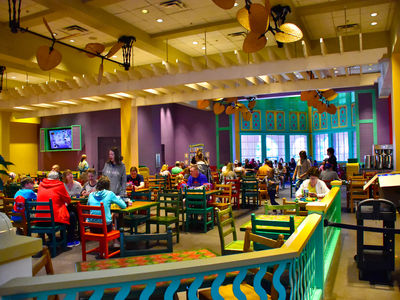 A seating area near the food court offers a comfortable area to enjoy your meal. The overhead fans help keep you in the spirit of the Caribbean. Photo by Donald Fink. 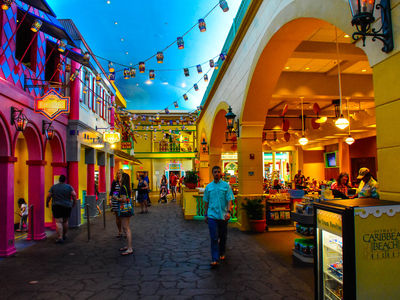 The food court is divided into several areas where you can select from several different kinds of meals. You feel like you're in a typical Caribbean village. Photo by Donald Fink. 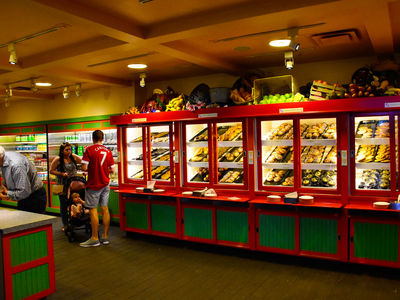 If you're in a hurry, or just want to grab something quick, you can get various pastries, drinks, and coffee at this corner pastry shop, also located in the main food court. No need to go through the main cash registers and work your way through the drink island. Photo by Donald Fink. 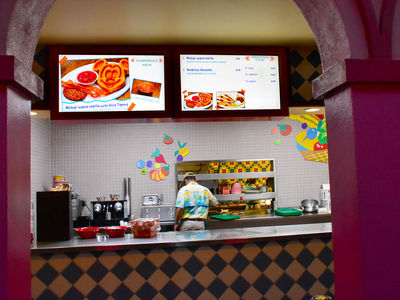 The Hamburger Stop station in the food court serves waffles and bacon during breakfast hours. Photo by Bonnie Fink. 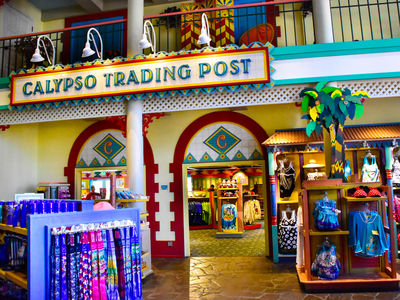 The Calypso Trading Post is located adjacent to the main food court, and in the same building. Photo by Donald Fink. 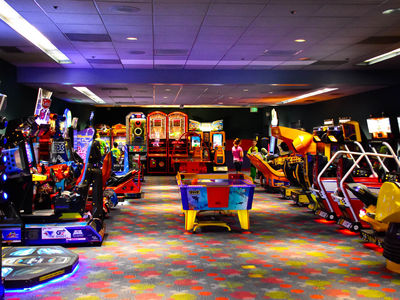 We don't know much about video games, but this arcade located in the Old Port Royale area of Disney's Caribbean Beach Resort looks like it could be a lot of fun. Photo by Donald Fink. 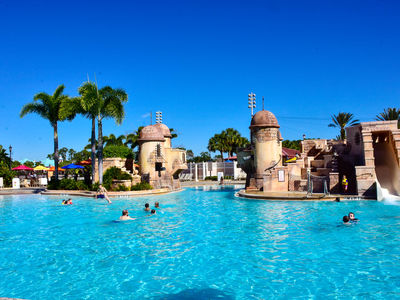 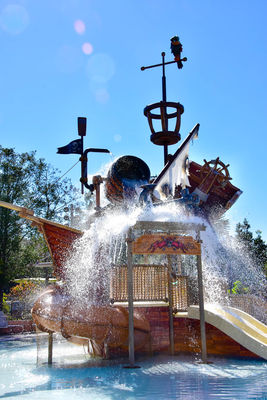 The Shipwreck play area is a special part of the Fuentes del Morro Pool at Old Port Royale. As you can see in the image, it has active water features. Guests enjoying this area must be less than 48 inches tall. Photo by Bonnie Fink.

The rooms at the Caribbean Beach Resort are divided into five separate countries, representing different island nations in the Caribbean Sea. They are Martinique, Barbados, Aruba, Jamaica, and Trinidad. Each area has six buildings with the exception of Trinidad, which has six in Trinidad South and three in Trinidad North. Each building has two floors but there are no elevators. If you have a mobility concern, you should make it known to Disney cast members when you make your reservation, and request a ground floor.

There is Wifi throughout the hotel grounds including In the rooms. Our spot checks around the grounds found no issues with reliable Wifi.

Bus service is available at each of the "countries," at Old Port Royale, and at the Customs House, where you initially check in. There's an internal bus that travels around the hotel, and service to all parks and Disney Springs is also available from each stop. So even though the hotel is quite large, you're never very far from transportation if you choose not to walk. 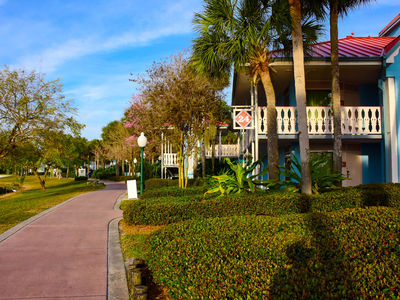 This walkway leaves Old Port Royale along the shores of Barefoot Bay and takes you through Martinique. Photo by Donald Fink. 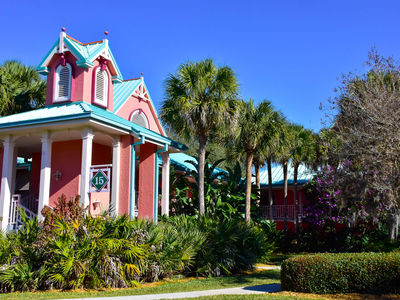 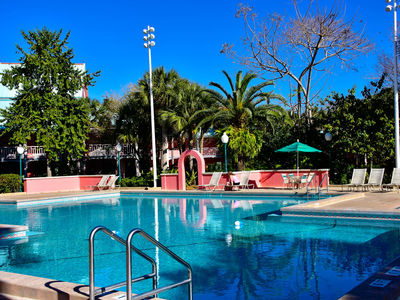 There are several pools scattered throughout Disney's Caribbean Beach Resort. If you're interested in a quiet, more intimate experience, you can select one of these, such as this pool located in the Barbados area of the resort. Photo by Donald Fink. 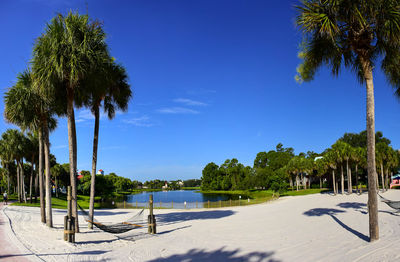 There are white sand beaches along the shores of Barefoot Bay, located in each of the island areas. We counted seven on our walk around the resort. Swimming is not allowed, but you can certainly stretch out in one of the hammocks or commandeer a lounge chair for some rest. Photo by Bonnie Fink. 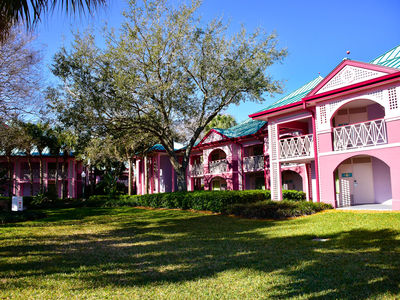 This brightly colored building is part of Aruba, located across Barefoot Bay from Old Port Royale. Photo by Bonnie Fink. 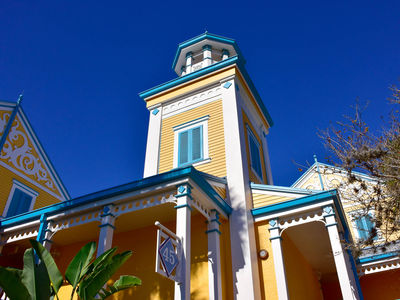 Jamaica is across Barefoot Bay from Old Port Royale. It would be quite a walk to get over to the food court, but the bridges on both sides of Caribbean Cay provide a great shortcut. Photo by Donald Fink. 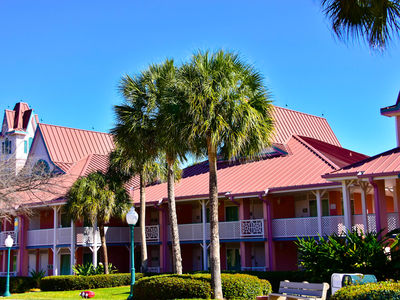 In the southern-most part of Disney's Caribbean Beach Resort is Trinidad North and Trinidad South. Walking at a normal pace, it will take about seven minutes to get from Trinidad South to Old Port Royale and the food courts. If there are people with mobility issues in your group, we suggest that you request either Trinidad North or Martinique for your stay here. Photo by Bonnie Fink. 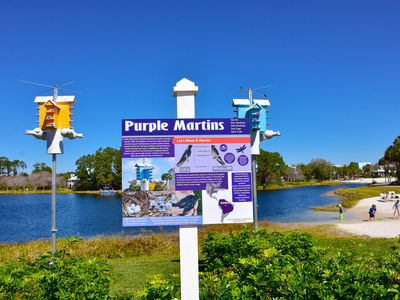 There are several locations around Disney property where you can find Purple Martin houses. We've seen them at Epcot and along the walking trail between Disney Springs and Old Key West. Purple martins are the largest swallows that inhabit North America. They migrate to and from South America and arrive here at Walt Disney World in January. These houses are not just for show. It's thought that virtually all the habitats used by Purple Martins in the last 200 years have been provided by humans. Photo by Bonnie Fink. 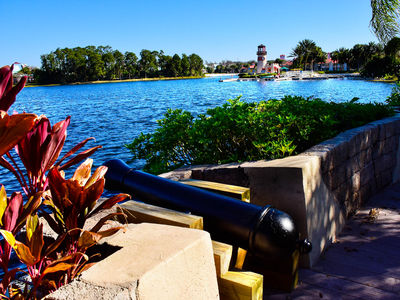 There are cannons guarding Caribbean Cay, which is the island in Barefoot Bay. Not only is this island a playground, it provides a great shortcut to Old Port Royale from Jamaica and Aruba. Photo by Donald Fink.

We have stayed at this resort on a couple of different occasions, and have found it to be relaxing and in the spirit of a typical Disney resort property. We can easily recommend it to anyone looking for a moderate hotel on property and we're comfortable in knowing that you'll have a good time here. The only reservation we might have in recommending this hotel is if someone has a mobility concern. This hotel, like many hotels on Disney property, covers a lot of acreage. While it's possible to navigate it with a minimum of walking using bus services, it can be time consuming waiting for a bus. Since we happen to like walking, we didn't find this hotel, with its sprawling grounds, to be a problem. It was actually fun for us walking around the lake when we captured the images for this tour.