The Art of Craft Tour: The Architectural History of Disney's Grand Californian Hotel

"Walk in Walt's Disneyland Footsteps" is one of the more popular tours offered at Disneyland Resort. But what a lot of guests don't know is that Disneyland Resort hosts a half-dozen or so more such tours which highlight fascinating Disney events, historical and otherwise. One such gem is the Art of Craft Tour, right in the middle of Disney's Grand Californian Hotel and Spa, which focuses on the architectural timeline of the design and completion of Disneyland Resort's flagship hotel.

This majestic addition to Disneyland Resort opened its doors to guests in 2001 as part of an expansion that also included Disney California Adventure and the Downtown Disney District. Just walking into the hotel gives visitors a sense of awe and inspiration. I fell in love with Disney's Grand Californian Hotel and Spa at first sight and always try to walk through it when I can, especially during the holidays when the live tree is on display.

I met my tour guide in the hotel lobby and since I appeared to be the only one in attendance, I received a one-on-one tour. The quick background summary of the Art of Craft Tour is named for the Arts and Crafts movement, which became popular in the late nineteenth and early twentieth centuries with inspiration taken from Frank Lloyd Wright. The movement was started in Europe as a result of artisans taking back their craftsmanship from industrialization.

One of the reasons I admire the rustic design of the hotel is its resemblance to Disney's Wilderness Lodge in Walt Disney World where I honeymooned. I remarked on this familiarity, to which my guide informed me that the same architect, Peter Dominick, designed both hotels along with Disney's Animal Kingdom Lodge. Mr. Dominick fashioned Disney's Grand Californian Hotel and Spa in the Arts and Crafts movement element creating a two-fold image for the hotel—a giant bungalow style house and an enormous tree.

We started the tour at the check-in lobby (also known as the great cathedral area) with its open-arched ceiling and exposed wood to illustrate the forest design. Anonymous artists were commissioned to create their work in the Arts and Crafts style to complement the hotel's design. 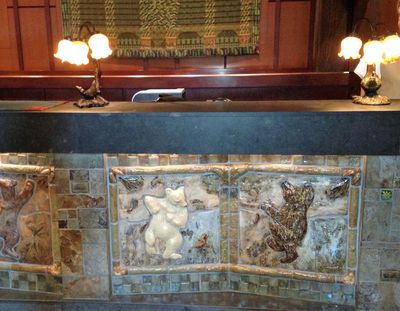 The dancing bear tiles represent each season. The artist behind these works is rumored to be a San Francisco 49ers fan, so her bears are drawn in football poses. Photo by Lisa Stiglic.

Next in the giant lobby, a grand piano and oversized fireplace invite guests to take a relaxing break. The open room is designed as a bungalow living room and as the clearing through the forest. The floor design recognizes the poppy—California's state flower. 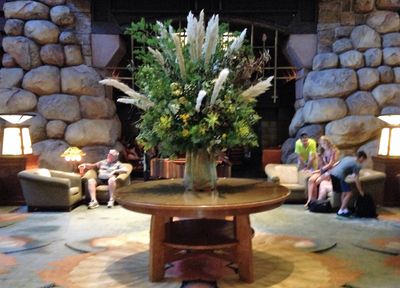 Keeping with Disney detail, fresh flowers, in an Arts and Crafts-style vase, are replaced daily throughout the Grand Californian Hotel and Spa securing its four-diamond status. Photo by Lisa Stiglic.

More exposed beams and chandeliers with a forest motif extend the woodland theme in the giant lobby and from there, it continues outside the hotel with the green roof capping the underlay to represent the tree's leaves. 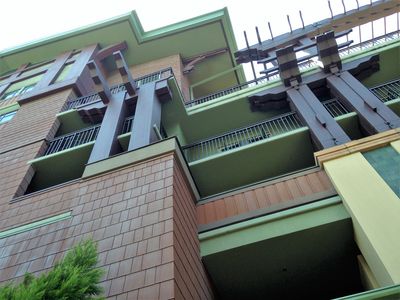 The grand rise of the hotel reflects the imagery of the redwood tree design inside and outside Disney's Grand Californian Hotel and Spa. Photo by Lisa Stiglic

Timothy Burrows was another designer brought on board who fashioned three metal gates, the Sun Gate, the Moon Gate, and the Arbor Gate (Downtown Disney District's entrance into the hotel). Due to safety codes, this gate stays open so Mr. Burrows' detailed artwork is not as pronounced. 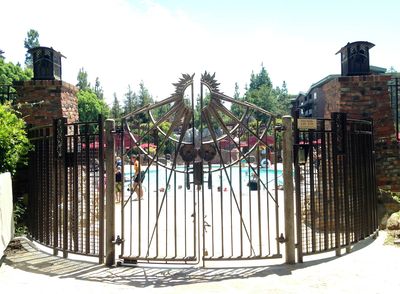 The Moon Gate sits on the north side of the pool. When closed, the moon image aligns with Disney California Adventure's Mickey Fun Wheel (but 15 years later, the grown trees have obscured the image). Photo by Lisa Stiglic.

The Arts and Crafts movement theme stretches into the adjoining restaurants of the hotel as well. Storytellers Cafe was fashioned by Marty Dorf and pays homage to one of Walt Disney's talents, storytelling. I've eaten in this location several times and never realized I was in the middle of a virtual library. 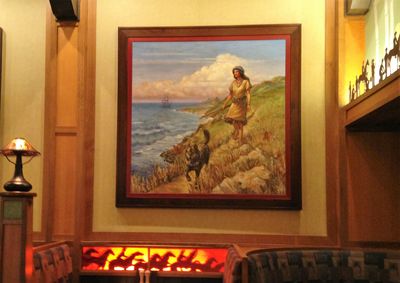 Scott O'Dell's literary classic "Island of the Blue Dolphins" is one of seven stories represented in Storytellers Cafe. Photo by Lisa Stiglic.

Next door at Napa Rose, my guide mentioned a bit about the name and motif. This high-end, farm-to-fresh restaurant is known for its menu of regional wines and California's Napa Valley influence, hence the "Napa" in the name. The "Rose" comes from Charles Rennie Mackintosh, another early Arts and Crafts period artisan, who was known for his signature rose artwork.

We then headed near the Arbor Gate courtyard, an open area with plenty of native foliage surrounding it. Turning toward the hotel and looking up, the cast member pointed out that this side of the hotel is painted green rather than the brown hue which covers the rest of the exterior. Mr. Dominick kept his tree theme intact, with moss on the north side.

Finally, we closed out with a trip to the hotel's main entrance to the stain glass mural door. This is trickier than it looks. With so much foot traffic in and out of the hotel, the sliding door doesn't stay closed for very long. 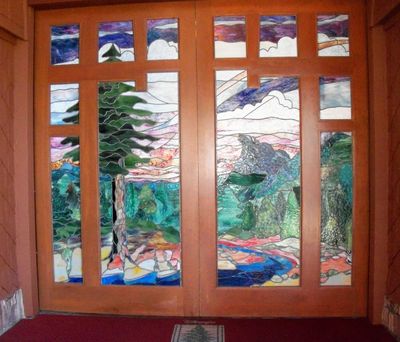 The full forest image with Grizzly Peak in the background is a beautiful photo op, if you can get it before the doors open. Photo by Lisa Stiglic

Overall, this was an entertaining, educational tour; I highly recommend taking a few hours one afternoon to peruse Disney's Grand Californian Hotel and Spa's picturesque decor and maybe enjoy the fare at Storytellers Cafe or Napa Rose. The Art of Craft Tour is available to all guests, free of charge, with the recommended minimum age of 14; inquire with Guest Services as soon as possible for the next availability. More tours are available at The Disneyland Resort including the Happiest Hotel on Earth Tour next door at The Disneyland Hotel, and the upcoming Disney's Happiest Haunts Tour just for Halloween. Call Disney Reservations for more information at (714) 781-8687.