Jedi Training: Trials of the Temple

My kids started to really get into Star Wars in the last year or so. They were finally old enough to sit through the original three movies to see just who these characters, like Darth Vader and Luke Skywalker, were. So the next step as a parent was to expose them to the Star Wars offerings at the Disneyland Resort.

My younger son just turned 4 this summer. Unfortunately, he is still too short to ride Star Tours and Hyperspace Mountain, so he is limited in what Star Wars things he can do at the parks. He enjoys the Path of the Jedi show, as well as the Star Wars Launch Bay. But, now that he is 4, it was time to send them to the Jedi Training!

Signing the boys up for this took a little bit more planning than a normal "day at the park" for us. I knew that we would have to be there close to park opening to get them into a show. We were in the park gates at 9 a.m., an hour after park opening, and headed straight for the ticket distribution for the show (which is located at the exit of the Launch Bay, across from the Autopia entrance). I had looked up the show times the night before, hoping that we could get one of the early shows of the six being offered the day we went. But by the time we got there, three of the shows were "sold out" of participant tickets. I chose the earliest show still available so we wouldn't have to wait around all day to come back. In talking with one of the cast members, I found out that they typically hand out the whole day's show tickets within the first two to three hours of the park being open, and that it is not unusual for people to come running over there right at rope drop (like they are one of the hottest rides in the park!).

The cast members handing out the show tickets had a couple of questions for my two boys. The first was "How old are you?" (and my 4-year-old was asked several times throughout the process because of his small size). The second question was "Can you follow directions?" to which they both replied "Yes!" The next question was "Can you use a lightsaber?" which caused them to hesitate just a bit, but they both shook their heads "yes." And the final question was "Can you fight Darth Vader?" Both of my boys looked at me with a deer-in-the-headlights look. I told them that of course they could, they dress up in costumes and have lightsaber battles at home all the time, etc., etc. They finally (and somewhat reluctantly) agreed that they could. So they were in. And I spent the next five hours assuring them that it wasn't going to be scary. Yes, you can do it. No, it's not a battle. It's Jedi training.

With our show time at 2:25 p.m., we were requested to be back to check in at 2 p.m. The cast members assembled the kids and started handing out Jedi robes. 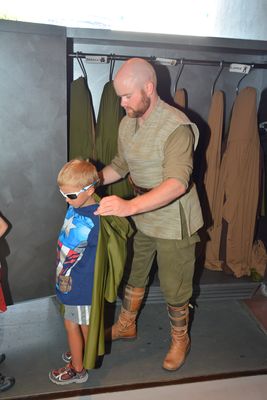 Each young Jedi-in-training is outfitted in a robe. Photo by Lisa Maulhardt, courtesy of Disney PhotoPass.

After they were lined up in their robes, the parents were escorted over to the stage area at Galactic Grill (formerly Tomorrowland Terrace). There are spots marked on the ground for families of participants, so you don’t have to worry about getting a good spot to take pictures. As the 30 or so kids came out, they were lined up with the help of some very-busy Jedi assistants. As the show goes on, the assistants hand out a lightsaber to each Jedi-in-training. Again, they were assembled, some on the stage, and some on the floor in front. Because my 4-year-old was one of the smallest kids, he was put front and center of the stage, with the corners of his robe tied in knots to keep him from tripping. 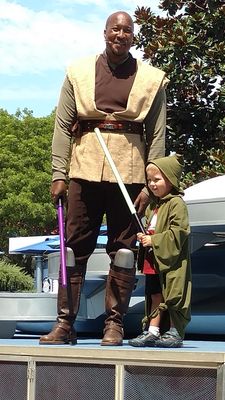 Because he was one of the smallest, my 4-year-old ended up front and center on the stage. Photo by Lisa Maulhardt.

The Jedi Master then taught the group a few moves that will help them in lightsaber battles: ready position, cut to the left shoulder, right shoulder, block, duck, stand, and cut to the head straight forward. After a couple of rounds of practice, they were instructed to use The Force to find the temple. As the kids stood there with outstretched arms, the middle of the stage rose to reveal the temple entrance. Once the temple was revealed, they were lined up again at the side of the stage. I was excited to see that my 4-year-old was up to be first, with his brother right behind him. 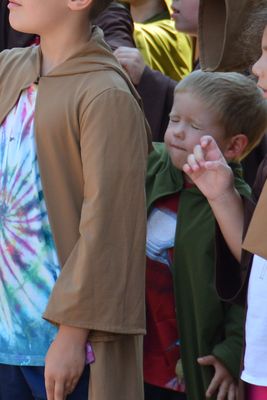 The force is strong with this one. Photo by Lisa Maulhardt, courtesy of Disney PhotoPass.

As the Imperial March began to play, Darth Vader appeared from the temple. He marched right over to the line of kids, and towering over my boys said "Join me, and I will complete your training." I figured at that point, my boys would start crying and run back to me (or at least be mad that I wasn’t entirely truthful when I promised it wasn’t going to be a fight). But, they stayed in line and continued to follow the directions given to them by the cast members. They still weren’t scared, even when the Seventh Sister came out on stage, as well. 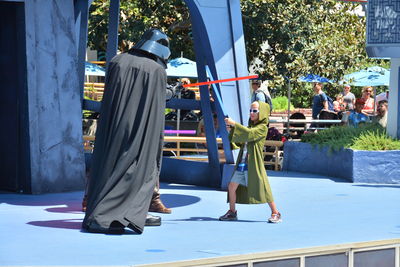 Each kid gets to battle with Darth Vader or Seventh Sister. Photo by Lisa Maulhardt, courtesy of Disney PhotoPass.

Darth Vader and Seventh Sister prepared for battle with the young Jedi, and I noticed that there were 2 lines of kids. One line was headed up to the stage to fight Darth Vader, and the other line stayed on the floor to battle with Seventh Sister. My 4 year old was first up to fight Darth Vader, and he walked up to him with more confidence than I expected. He listened to his Jedi Master and used the lightsaber skills he was just taught, and fought the Sith Lord all by himself. Proud-mommy moment right there. Then my older son got his turn to battle Vader, as well. After each kid was done, they were escorted off the stage to sit down and watch the rest of the kids. Halfway through the line of Jedi-in-training, Vader and Seventh Sister switched places. Each kid got to use their new lightsaber skills on either Darth Vader or Seventh Sister. 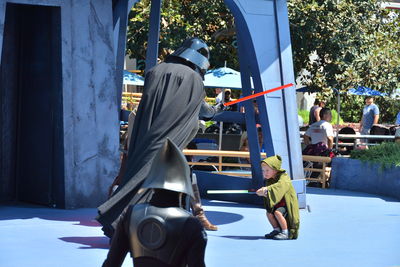 Using one of the new lightsaber battle skills he learned: DUCK! Photo by Lisa Maulhardt, courtesy of Disney PhotoPass.

As the show wrapped up, Kylo Ren came out to battle with the stars of the show. Then robes and lightsabers were collected, and each participant received a special pin to commemorate their time as a Jedi. 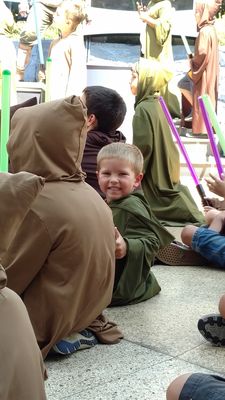 He may have been the smallest Jedi out there, but he was so proud of himself after battling with Darth Vader. Photo by Lisa Maulhardt.

Overall, I was impressed with the show. It was well organized for having that many children involved. And despite their concerns, my boys ended up loving it. It was definitely worth our early morning to get them signed up.