While the Disneyland Resort is undoubtedly magical year-round, there are two special times of the year that I find have a little extra pixie dust sprinkled around, and one of them is right around the corner. That's right, no more summer fruit, it's time for pumpkin spice: It's Halloween Time!

Halloween is by far one of my favorite times to spend at the Disneyland Resort—from the decorations to the special food and merchandise offerings, to every other fun surprise that comes with the holiday. Now, of course, the biggest offering at Disneyland during Halloween is Mickey's Halloween Party, and we'll get into that later, but if you're not interested in attending the party, there's still a lot for you to experience and enjoy. 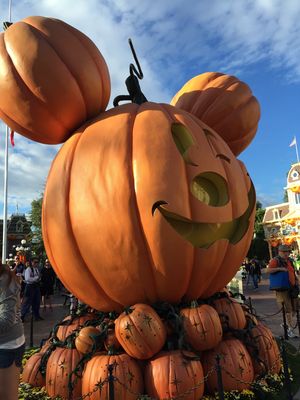 Your Halloween-fun begins right at the front of the park with the character pumpkin heads adorning the entrance gates, the orange flowers in the Mickey planter at the train station, and culminating with the giant Mickey Jack-O-Lantern at the start of Main Street. As you enter the park and make your way down Main Street, make sure to stop and look around for a while, there are decorations galore in the shops, the windows, the various buildings—they're everywhere. Here on Main Street you will also be able to catch the characters in their Halloween costumes, making for a picture-perfect photo-op. Before heading off to your first attraction however, make sure you make time to visit the Partners Statue at the Hub to see the fun Jack-O-Lanterns surrounding it, representing the different lands that make up Disneyland. 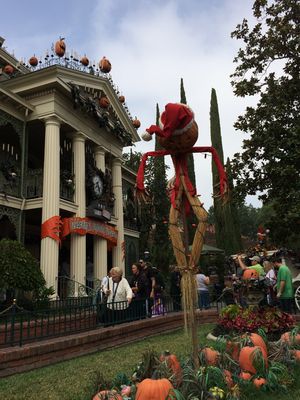 Of course, no trip to Disneyland Park would be complete without hitting the best attractions, and Halloween is a perfect time to find the thrills with the overlay of two different attractions: Space Mountain Ghost Galaxy and Haunted Mansion Holiday. Jack Skellington and his friends have moved back into The Haunted Mansion and are ready to frightfully celebrate both holiday seasons. Meanwhile, over in Tomorrowland, the spooky and chilling ghosts have reclaimed residence of Space Mountain to give you the ultimate thrill. Also, don't forget to drop-in to Disney California Adventure's Twilight Zone Tower of Terror one last time during the Halloween season before it's transitioned into a new attraction early next year. 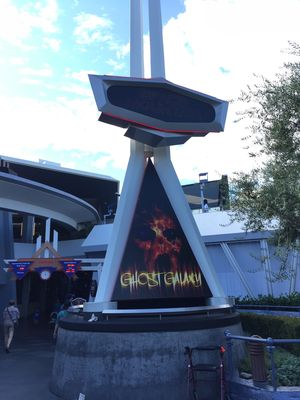 Another fun offering during Halloween-time at the park is the Happiest Haunts Tour, led by the Disneyland Tour Guides. This year's tour offers a “two-hour historical walking tour of Disneyland Park” learning about the history behind The Haunted Mansion and how the Imagineers behind it brought it to life. This tour also includes a baked treat, an exclusive tour pin and button, and a Fastpass to enjoy the Haunted Mansion Holiday later that day. The tour is offered at both 10 a.m. and 11 a.m. daily, from September 9 to October 31, and is $85 a person, park admission not included (Annual Passholders and Disney Vacation Club members can receive a 15% discount). Tours can be booked by calling the Disneyland Tour reservation line at (714) 781-8687.

After all this fun and celebrating, you're bound to be hungry—but fear not, there are all kinds of special seasonal offerings for you to dig into and enjoy. You can find pumpkin-flavored everything just about everywhere throughout the park, but make sure you try the pumpkin cheesecake, it is one of my all-time favorite desserts at Disneyland and possibly the best pumpkin cheesecake I've had anywhere. You will also be able to find Halloween-themed caramel apples, pumpkin fudge, Halloween-themed cake pops, Jack-O-Lantern marshmallow wands, and many different fall flavored food items at the bakeries and candy counters around the Resort. Keep your eye out for special sweets and spooky treats in New Orleans Square.

Another special offering this year at the Disneyland Resort is the Trick or Tea at Steakhouse 55 in the Disneyland Hotel. The Halloween-themed tea will feature seasonal teas, including an apple pie green tea blend, along with fall flavors, like a maple pecan scone featuring orange marmalade, and Jack Skellington decorated chocolate-dipped strawberries. The Classic Afternoon Tea is a lot of fun and I can only imagine this Halloween-themed tea will be just as lovely, if not more so.

Finally, it wouldn't be a special season at Disneyland if there weren't merchandise galore, and, if that's what you're looking for, you're in luck. Disneyland always has a plethora of Halloween-themed merchandise and decorations, so you can keep the Disney Halloween magic going when you return home. Whether it's a special Halloween shirt or jacket, Minnie Mouse witch ears, or souvenirs from The Nightmare Before Christmas, you will definitely find it at the many different shops throughout the Disneyland Resort. 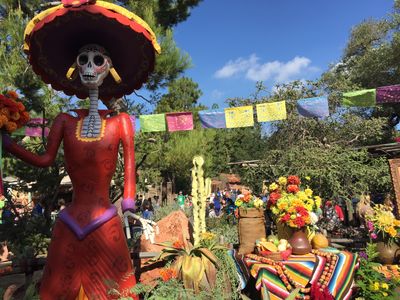 The Dia de Los Muertos display can be found in Frontierland. Photo by Megan Walker.

An added bonus, Halloween is not the only fall holiday that is celebrated at the Disneyland Resort, you can also experience a few fun offerings for Dia de los Muertos. From September 9 to November 1, you can visit Zocalo Park (located near Big Thunder Mountain Railroad) and see a display of Dia de los Muertos decorations, Calaveras-style face painting, and yummy pumpkin flan (and other traditional Mexican fare) at Rancho del Zocalo.

Now, on to Mickey's Halloween Party. 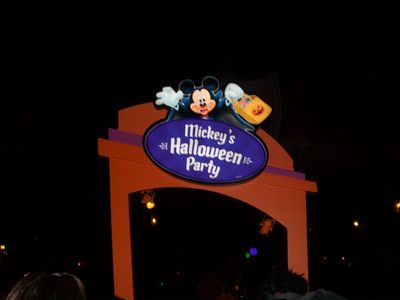 Arguably the biggest offering at the Disneyland Resort for the Halloween season, this extra-ticket party occurs on selected nights throughout September and October. Once you enter the park for the Halloween party you'll be given a bag to use to collect candy from all of the different trick-or-treat locations spread throughout the park, but the fun doesn't stop there. The Halloween party is also the only place you can see one of my personal favorite fireworks shows, Halloween Screams. Hosted by everyone's favorite skeleton, Jack Skellington, these fireworks are the perfect way to enjoy a spooky Halloween evening. Keep your eye out for Zero, Jack's ghost-dog. 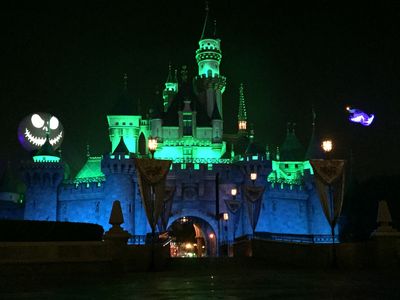 New this year is the Frightfully Fun Parade, which guarantees chills and thrills for everyone. Featuring Halloween favorites, such as Jack Skellington, the ghosts from the Haunted Mansion, and, of course the collection of villains who come out to play during this season, this parade should be a fantastic addition to an already great entertainment assortment. Make sure you get to the parade early to witness the Headless Horseman ride down Main Street on his black stallion. 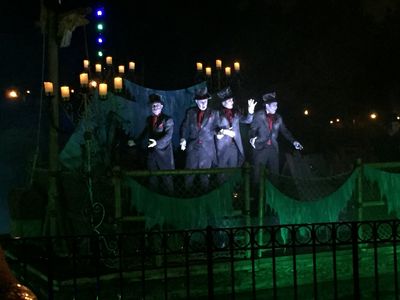 The Cadaver Dans entertain on the Rivers of America. Photo by Megan Walker.

If the parade and fireworks weren't enough to entertain you for the evening, you also must make sure you make your way along the Rivers of America to listen to the delightfully chilling “haunted harmonies” of the Cadaver Dans as they sing some Halloween favorites while floating along the smoke on the river. 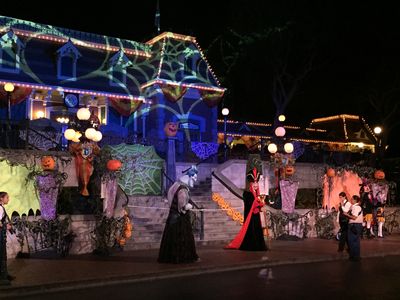 Finally – if you are a villain fan, you'll want to attend Villains Square, a meet-and-greet with some classic Disney villains in Town Square.

Halloween is a great time to spend at the Disneyland Resort, whether you're going for a special vacation, or you're just a local looking to get in the holiday spirit. There are so many different seasonal offerings for you to enjoy, it'd be hard to not have a great time. The giant Mickey pumpkin will be greeting visitors on Main Street very shortly—so grab a pumpkin treat, get into the spirit, and have a happy Halloween.