We’ve visited many of the countries that are represented around World Showcase, and while France is still on our to-do list, we believe that France at Epcot gives a good sense of what it might be like. Visiting Epcot, France, on a mild spring day is just about as close as you can get to actually going to Paris. At least, we believe it represents the more positive aspects of the "city of love" with its gardens, the central fountain, the Eiffel Tower as it would have looked in the late nineteenth century, and even the Morris Columns. All combined it gives you the sense that Paris has landed squarely in Orlando.

In this Photo Tour, we offer some of the images that we think best represent Epcot France. We hope you enjoy them. 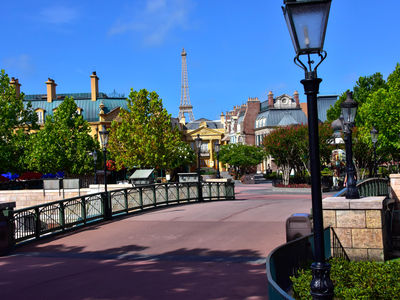 When entering France from the UK at Epcot, you cross a footbridge. The design of this bridge is said to be inspired from the Pont des Arts footbridge crossing the Seine River in Paris. Photo by Bonnie Fink.

The France Pavilion is patterned after various neighborhoods in Paris, France. There are gardens and trees, fountains and hedges including the shops along the streets. France at Epcot also includes a view of the Eiffel Tower, not shown here in this image. Photo by Donald Fink. 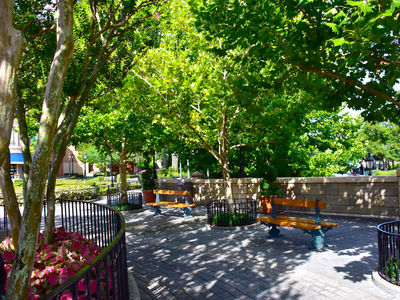 The gardens in Epcot France are landscaped and pruned to always look like spring in Paris. Photo by Bonnie Fink. 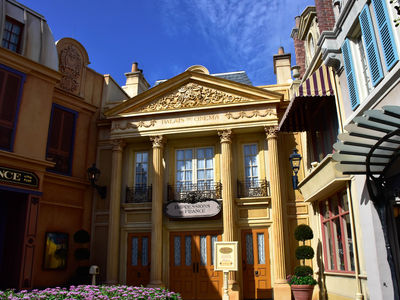 In among the shops and buildings at Epcot France is the short film, Impressions de France. This panoramic movie showcases locations throughout France. Photo by Bonnie Fink. 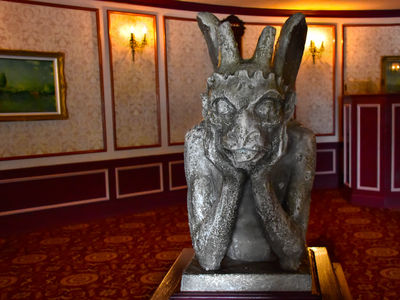 This gargoyle in the central waiting area of Impressions de France was constructed from a casting made from one of the actual gargoyles at Notre Dame in Paris, dating back to as early as 1345. Photo by Bonnie Fink. 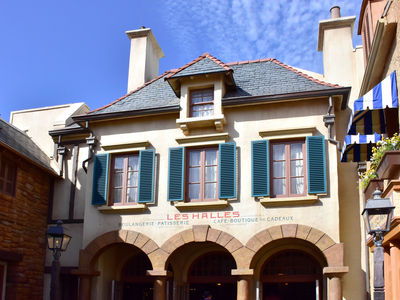 Inside this building is a gift shop that guests walk through after viewing the movie, Impressions de France. If you continue through the gift shop, you'll discover Les Halles Boulangerie-Patisserie, which is a popular bakery featuring many different French inspired sandwiches and pastries. It's worth a stop for lunch, or just a really good snack. Photo by Bonnie Fink. 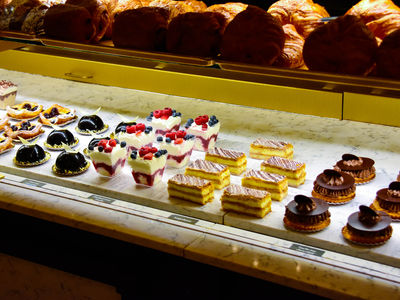 There is a large selection of pastries at Les Halles Boulangerie-Patisserie. Photo by Donald Fink. 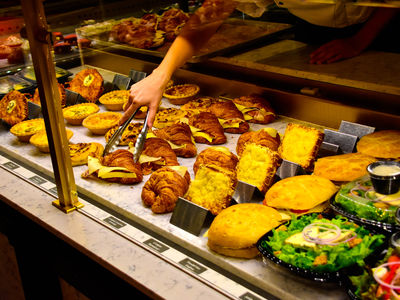 Les Halles Boulangerie-Patisserie offers many different savory dishes in addition to the pastries. It's a good stop for lunch. And since it opens at 9:00 am ahead of other food service locations at Epcot, it's a good choice for breakfast. Photo by Donald Fink.

Epcot usually opens at 9:00 am, but World Showcase doesn't accept guests until 11:00 am. One exception to that time constraint is France. The reason is that Les Halles Boulangerie-Patisserie is open for breakfast. This is especially helpful if you enter Epcot from the International Gateway, which is the entrance just across the bridge near England. You can see their menu here. At first glance, the shops in France don't look like they have much to offer. They're tucked away behind the two main restaurants into small alleys that funnel guests into Impressions de France and the bakery, Les Halles Boulangerie-Patisserie. If you happen to visit one of these shops, you will soon see that there are a variety of items from France, including wines, designer bags, and French perfumes. Photo by Bonnie Fink. 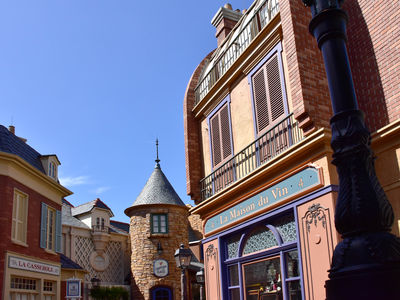 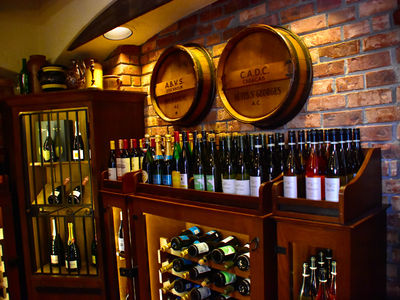 We're not wine experts, but there seems to be a large selection of French wines at Les Vins de France. Photo by Bonnie Fink. 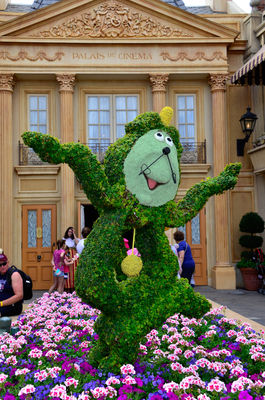 Cogsworth, from Beauty and the Beast, is usually on display in the flower garden near the fountain during the annual International Flower and Garden Festival. Photo by Bonnie Fink. 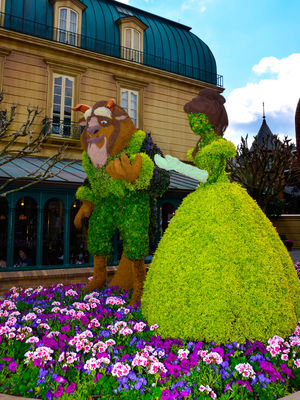 Beauty and the Beast in topiary are on display in the flower garden near the main fountain during the annual Flower and Garden Festival. This is a great backdrop for a family photo, or a selfie. Photo by Donald Fink. 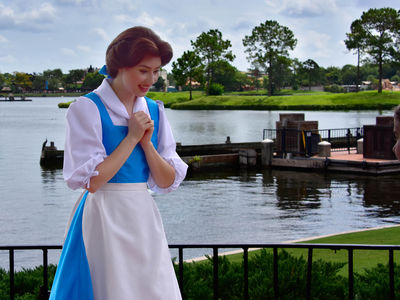 Belle, from the 1991 movie Beauty and the Beast, makes an appearance near the water front in Epcot France nearly every day. Photo by Bonnie Fink. 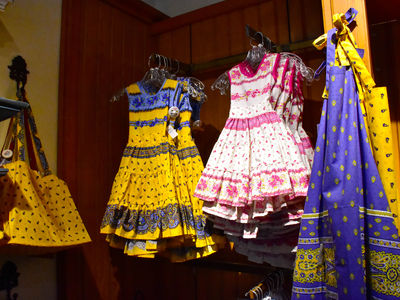 It’s not all about Paris. These colorful dresses look like they would be more at home at a small shop in the French countryside than in the big city. But they’re available at Epcot too. Photo by Bonnie Fink. 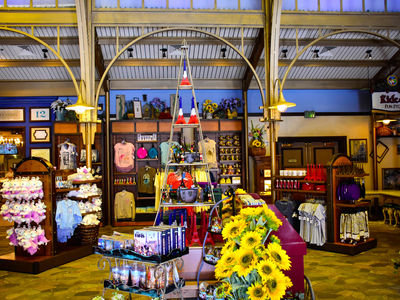 The gift store, located behind Chefs de France, is where you'll find all the Disney gift items. Who knows when you'll need a plastic Eiffel Tower? Photo by Donald Fink. 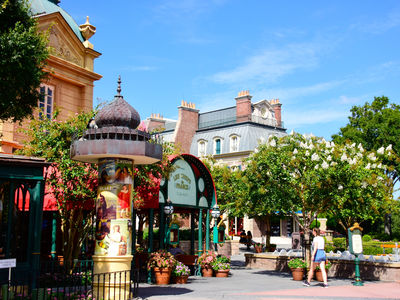 At the entrance to Chefs de France, you can see an icon of the Parisian landscape, the Morris Column. There are three at Epcot's France, but Paris is said to have 223 columns throughout the city. They first appeared in Paris in the mid-nineteenth century, advertising mainly concerts, movies, theatre, and night club shows. Photo by Donald Fink.

One of our favorite dining experiences at Walt Disney World is Chefs de France. This is at least an annual event for us. We enjoy either the roasted chicken, Poulet fermier à la Layonnaise, pomme puree, or the braised beef short ribs, Boeuf Bourguignon, polenta crémeuse. Photo by Donald Fink. 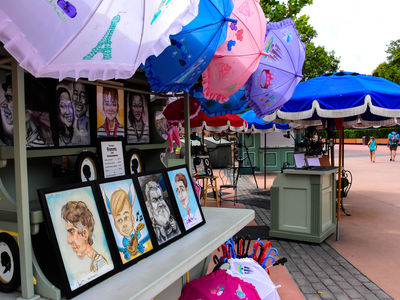 Near the water front in France is a kiosk that offers caricature drawings as well as hand painted parasols. Photo by Donald Fink.

Street performers are fun and plentiful all around the Walt Disney World Resort. They're in all the parks including Epcot, and one of our favorite acts is Serveur Amusant. This is a short performance consisting of a pair of French waiters who perform acrobatics in front of Chefs de France. Performance times are published in the Epcot Times Guide, but we like to be surprised. Video by Donald and Bonnie Fink.