The Race to 40 Inches

Everyone plans differently for a trip to the Disney Parks. For those with children, planning always includes (or should always include) the height requirements for the attractions. The last thing you want is for your child to get excited about going on something — and then discovering he or she is too short by just an inch or two.

As Disneyland Annual Passholders, we pretty much have the list memorized. My oldest son, who is now 7, was always pretty tall for his age, so he was actually tall enough for rides even before he was really mature enough for them. Just last month we convinced him to ride California Screamin' for the first time.

Unfortunately, my younger son is just the opposite. At his 4-year checkup this summer, my little guy measured in at 37.5 inches (without his shoes on), which is just the 5th percentile for his age. (In case you don't have kids or don't know what that means, it means that out of 100 4-year-olds, 95 of them are taller than he is). Although he was born almost exactly the same size as his older brother, he is just growing at his own rate and has consistently been in the 5th percentile since he was about 15 months old.

I know that size doesn't matter. And I wouldn't change anything about him. But, we are on a bit of a time crunch here.

The ride this energetic 4-year-old would love to ride most is The Twilight Zone Tower of Terror at Disney California Adventure. With Disney officially announcing the closing date of the ride as January 2, 2017, we are quickly approaching the end of our window to ride it. Yes, it will be (mostly) the same ride after they change the theme to Guardians of the Galaxy, but we are planning to move next summer, quite possibly before the ride gets reopened. Hence our problem. 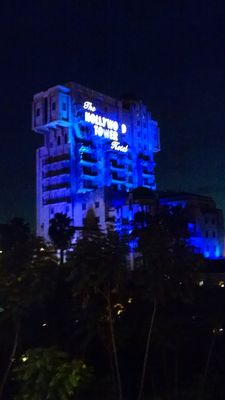 The Tower of Terror, as we know it now, is scheduled to go dark in January 2017. Photo by Lisa Maulhardt.

The Tower of Terror isn't the only ride that has a 40-inch height requirement. In fact, there are several rides throughout the Disneyland Resort that require riders to be at least 40 inches. At DCA, in addition to The Tower of Terror, there is Radiator Springs Racers, Jumpin' Jellyfish, Silly Symphony Swings, and Soarin' Around the World. Over at Disneyland, Splash Mountain, Big Thunder Mountain Railroad, Space Mountain, and Star Tours all have the 40-inch requirement, as well. So, for a Disneyland Annual Passholder family, 40 inches is almost a kind of "rite of passage." 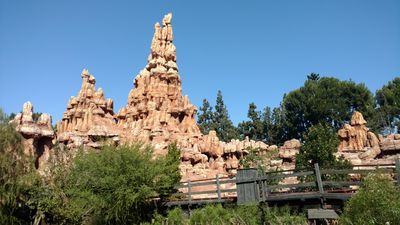 Big Thunder Mountain Railroad is just one of the many rides he can't wait to go on. Photo by Lisa Maulhardt.

The personality difference between my two boys is interesting. My oldest, who has been tall enough for all of these rides for a very long time, really has no interest in going on them. It actually is probably a blessing, because when we go to Disneyland, he isn't constantly bugging me to stand in an hour-long line to ride them. Plus, when I go by myself with the boys, he would be disappointed that he couldn't ride them, since I would have to stay with his little brother. But my youngest is a little daredevil. He says he can't wait to get on these rides.

We do have one thing on our side. When Disney checks the height at each of the rides, the kids still have their shoes on. Any parent who has been in this situation knows that the kind of shoes your child is wearing makes a difference. Sandals do little to help give them that extra boost. Tennis shoes can help. As of our visit to the parks in September, he has about a half an inch to go (with his boots on) to be tall enough for the 40-inch rides. But safety is always first, and "fake boosting" by putting risers in the shoes (or fluffing the hair) is not recommended. 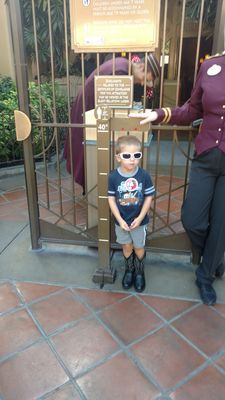 Even with his boots on, he still has some growing to do. Photo by Lisa Maulhardt.

In our kitchen at the moment, there is a piece of tape on the wall. It marks 40 inches from the floor. We keep reminding him to eat good food so he can grow to ride the rides. We know that his height has very little, if anything, to do with his eating habits (he actually eats pretty well). His height has way more to do with his DNA—he is just going to be shorter for his age (at least he has a knack for gymnastics). But the reminder in the kitchen has helped us to convince him to eat all of his veggies.

So, our clock is ticking. I am fairly sure he will be tall enough to ride things soon. We are just hoping it will be soon enough to ride the Twilight Zone Tower of Terror, before it goes dark forever.