Moderate temperatures helped spirits stay high under slightly cloudy skies for the fall edition of MouseAdventure. Over 500 players came out to Disney California Adventure to participate in MouseAdventure Villains, produced by Third Gate Games and sponsored by MousePlanet. Although the weather cooperated, parking backups at the Mickey and Friends structure caused some teams to wait in long lines, while others were diverted to the Toy Story Lot where they encountered more queues for buses. One team reported it took them an hour and a half to get parked and back to Downtown Disney. 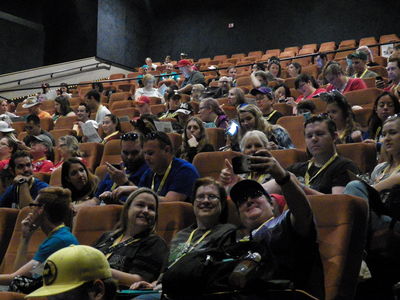 Teams study their materials and take selfies while waiting for the presentation to begin. Photo by Aaron Maggs.

The day began with check-in at the AMC Theatre in Downtown Disney, and the rules presentation was slightly delayed to allow those stuck in the parking mess to arrive. Teams were then scattered around Downtown Disney to receive their game materials before heading into Disney California Adventure Park to begin their quests. More lines at security backed up almost to World of Disney tested the patience of the teams.

Basic teams were tasked with completing eight quests and a set of trivia questions themed to Disney's villains; Advanced division teams received an additional three quests to complete in the same six hours of game time. Quests were scattered in every corner of the park, with one of the quests only available after the start of the game. 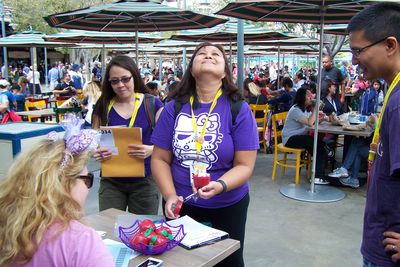 Choosing a poisoned apple is disappointing. Photo by Lora Parral.

Teams were given a sheet telling them to come to "MouseAdventure Central" (located at the Pacific Wharf area) to bob for apples starting at 10:30 a.m. Some teams appeared nervous that they would literally have to stick their heads in water. Luckily for them, they merely had to select a plastic apple from a basket containing three good apples and three "poisoned" ones. Teams that selected a poison apple had to wait to return a half an hour later to try again. If they failed a second time, they received the quest on return after their waiting period. Once received, the quest sent teams into the Buena Vista Street area to search for specific words from signs and objects in the area. 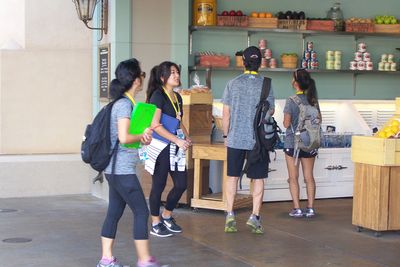 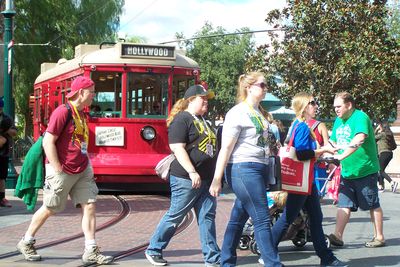 A team crosses the Red Car Trolley track in search of answers on Buena Vista Street. Photo by Lora Parral.

Since the last MouseAdventure event at DCA, Luigi's Flying Tires has been transformed to Rollickin' Roadsters, so naturally it was a good opportunity to take advantage of this change. Did you know each of the 20 possible cars has its own unique name? Teams were tasked with determining which cars were not in operation based on specific clues. Normally a full ride compliment is 18 cars, but partway through the day, one of the cars broke down, so only 17 were dancing in the afternoon. 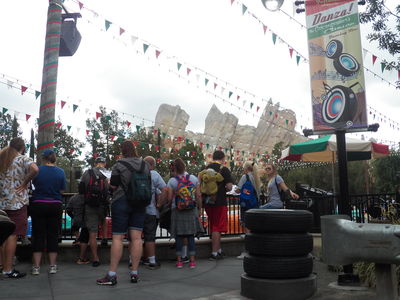 Luigi's dancing cars receive teams' scrutiny as they try to determine which are missing. Photo by Aaron Maggs.

The Redwood Creek Challenge Trail presented another opportunity for teams to test their observation and climbing skills as they located words removed from provided images. Posters, signs, and items on bulletin boards were all fair game as teams looked up down and all around. 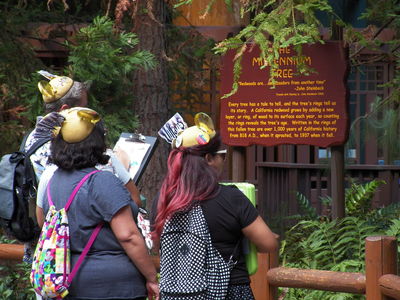 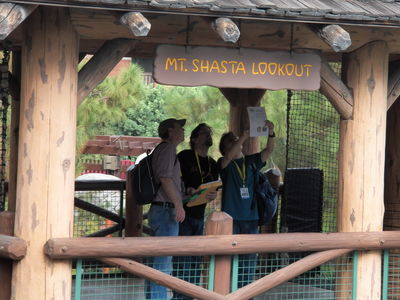 Don't forget to look up when searching for MouseAdventure clues. Photo by Aaron Maggs.

Advanced division teams faced a daunting quest to locate missing words in Hollywood Land to fill in a grid of letters. The normal strategy of finding just enough to work a puzzle was not possible in this case, as teams were not given the length of the words needed. In addition, some of the items, like the Ampro Stylist projector in a display window near Award Wieners, are well hidden. 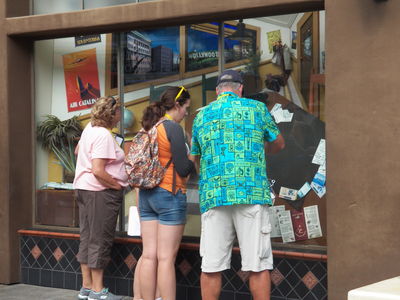 If you've had trouble with them at Walt Disney World, MagicBands can seem like a villain. Teams were given seven free bands (strips of paper) that they had to arrange in order to reveal a clue. Several sets of images from around Paradise Pier were used, including the mermaids on the facade of the Little Mermaid attraction, the tattooed man on the boardwalk, and the different California piers depicted on the carousel. Once decoded, the message instructed teams to determine where they could "see our sideshow." Those teams who needed to take a restroom break in the area were the lucky ones, since the sign was located directly across from them on a wall not visible from the main walkway. 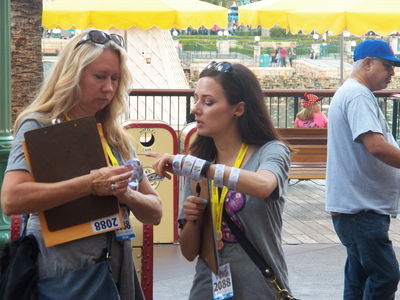 Strips of paper substitute for MagicBands during MouseAdventure. Photo by Aaron Maggs.

Even the tiny area of "a bug's land" didn't escape MouseAdventure's scrutiny. Teams located the double letters in words removed from provided images of signs and objects around the area. The day's one piece of errata came from the sign on "it's tough to be a bug" that has been removed and replaced with a sign for Moana; the theater is currently showing a sneak peek for the upcoming film instead of the usual 3-D attraction. 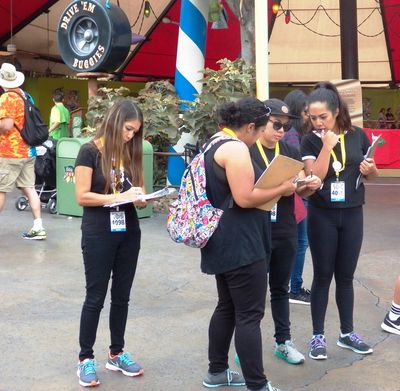 The double G on the sign behind team Household Objects might be what they are looking for to solve the quest. Photo by Aaron Maggs.

Full results for all teams are available at MouseAdventure.com. Total possible points for the Basic division was 470 and for Advanced was 610, and a full list of quests with answers will be posted on the MouseAdventure website soon.

The best new team (not otherwise placing) was Ol' Hatty's Heads with 364 points, who placed eighth overall on their first game. There were enough teams to make a full family division for this game, and the highest scoring team in that category was Team Frog Car with 308 points. 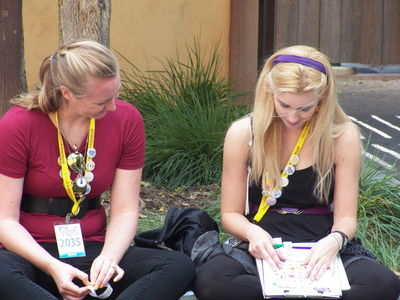 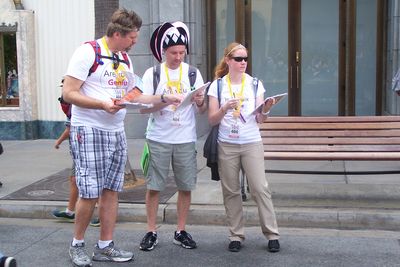 Although not eligible for any prizes during non-Invitational MouseAdventure games, many master teams return to compete against one another, mainly for bragging rights and the thrill of the puzzle hunt. Three master teams competed in MouseAdventure Villains. The teams received the following scores: 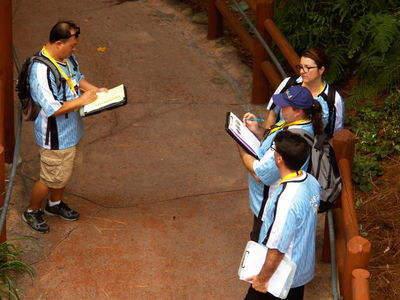