My family and I have been members of Disney's Vacation Club (DVC, Disney's timeshare program), since our now 11 year old son was born. DVC regularly offers perks for members, including dining and recreation discounts at the Disney theme parks, a special lounge for member use at Disney's Epcot, and special Member events. This year, DVC turns twenty-five, and to celebrate, DVC is offering more perks to members than it has during the entire decade plus I've been a member.

So far, we've attended the special Members only Neighborhood Beach Bash at Typhoon Lagoon, and picked up some discounted Gold Annual Passes to Walt Disney World. Recently, a DVC perk was offered right in my own backyard in New York, and I jumped at the chance to take advantage of the offering. Tickets to Disney Aladdin on Broadway were made available to Members for a special Members only show on October 2& at half-price. As soon as I read about the offering on the DVC Member website, I called Telecharge and there were tickets left. I was able to score some tickets in the Mezzanine, my very favorite spot to sit to enjoy a musical (close enough to see well, but far enough away to take in the whole stage). 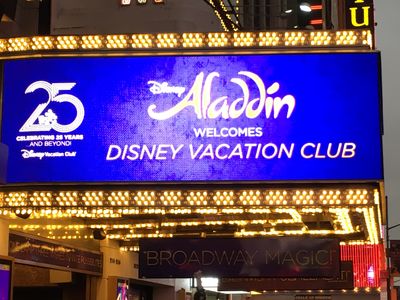 As we approached the New Amsterdam Theatre, we noted a long line snaking around the block. Upon inquiry, we learned that everyone on line was a ticket holder waiting for the DVC Aladdin performance. We hopped on line, and as is often the case in a group full of DVC members, talk turned quickly to visiting Walt Disney World. Members were chatting about the new DVC Polynesian Bungalows (not surprisingly, the Bungalows were getting rave reviews), and talking with excitement about the changes coming to the DVC space at Disney's Wilderness Lodge (Bungalows and more Villa rooms are being added there, along with major renovations of the pool and recreation area). 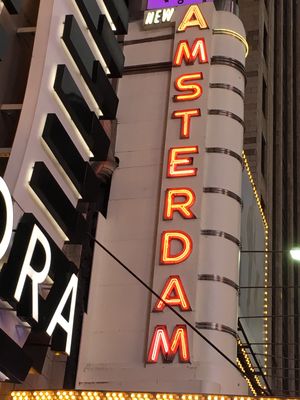 The beautiful signage for the New Amsterdam Theatre, home of "Aladdin." Photo by Donna Fesel.

As we rounded the corner to the theater, and saw that the marquee said "Disney Aladdin Welcomes Disney Vacation Club," we got even more excited for the show. Inside the theater lobby, in addition to the usual pre-show hustle and bustle, Disney cast members flanked the walls, saying "Welcome home." For those of you who don't know, every time a DVC Member enters a DVC accommodation or event, this is how we are greeted. Like every other time I hear "Welcome home" from a cast member, I got goosebumps, because I knew that I was about to embark on something wonderful with strangers who feel like friends.

We picked up our Showbills (the booklets that outline the production, cast, and schedule) and made our way to our wonderful seats. We were a bit early, and had time take in the gorgeous turn of the century details that were intricately restored in this Broadway shrine, which has been designated both a New York City Landmark, and is on the U.S. Register of Historic Places. From the woodwork, to the gilt accents, to the beautiful fabrics, like many of the finest theaters we are lucky enough to have in New York City, the New Amsterdam is a showstopper.

Before the show began, we were treated to some history about the New Amsterdam. Opened in 1913, the theater used to house the famous burlesque, Ziegfeld Follies. From 1937-1985, the New Amsterdam was sliding into disrepair. Painted brown on the interior, with mushrooms and even a tree growing in the orchestra pit, the theater routinely showed Kung Fu movies in what was then a very seedy Times Square. In 1995, just as New York City was starting to focus on the revitalization of the once glorious Times Square area, Disney Theatrical Productions took out a multi-decade lease on the New Amsterdam and began a two year renovation to restore its once landmark beauty. Along with several subsequent leases, the New Amsterdam became the cornerstone of The Walt Disney Company on Broadway. The Lion King opened at the theater, followed by The Little Mermaid, and most recently, Mary Poppins. And then, in 2014, the New Amsterdam became the host to Disney's newest Broadway enterprise, Aladdin. Aladdin the musical has been or is being performed currently in: Toronto, Denmark, Tokyo, Hamburg, London, and Australia. It will tour North America in 2017.

The Aladdin musical closely mirrors the beloved Disney animated film of the same name, with a few difference. Of note, Iago is a human, not a bird, and Aladdin comes along with a distinct group of friends. Genie, portrayed so memorably by Robin Williams in the animated classic, has been played by one actor since Aladdin opened in 2014, James Monroe Inglehart. Inglehart has won both the Tony Award, and the Drama Desk Award for his performance. As soon as the performance began, it was easy to get swept up in Inglehart's masterful ownership of this iconic role. He embodied the physicality of the role (singing and dancing like mad at the same time), with the humanity and impeccable comic timing required. Inglehart as Genie also had all the one liners inserted into the script just for DVC's members. For example, "I need a vacation, anyone know of a good timeshare?" Later, when Aladdin kept his promise and freed Genie from the lamp, Inglehart said to thunderous applause from the DVC audience, "Call Guest Services, I'm going to Aulani!" These little insider bits, along with the ever-present DVC camaraderie, pervaded the performance.

The show itself, in addition to Genie, was terrific. All the songs I love from the animated classic, including "A Whole New World," "Friend Like Me," and my personal favorite, "One Jump Ahead" are featured to nostalgic effect, performed by world class stage performers. Three songs written for, but not used in the film are featured as well, along with four songs written just for the live show. The show was well-performed, and time flew right by until the standing ovation at the end.

We laughed so hard, danced in our seats and when it was over, were so glad we came, Senior Vice President of Disney Vacation Club, Ken Potrock, appeared on stage with Inglehart, and announced that some special magic would happen. After a DVC member in the audience shouted, "Free points," and we all laughed, Potrock announced that in honor of the twenty-fifth anniversary of DVC, $25,000 would be donated to Make-A-Wish. Potrock went on to say that several Make-A-Wish families were in attendance at the sold out performance, and asked that they stand. For those of you who may not know, Make-A-Wish is a most excellent non-profit dedicated to granting the wishes of children with life-threatening medical conditions. There wasn't a dry eye in the New Amsterdam Theatre as that gift was announced. My family had such a wonderful evening of fun and fellowship, followed by a great nod to people in our midst who received some well-deserved pixie dust.