Celebrating the Holidays at the Disneyland Resort

Of course the main reason people flock to the resort to celebrate the holidays are for the numerous decorations, and if that's what you're looking for, you won't be disappointed. Beyond the castle, you can find decorations for the holidays everywhere you go. My favorite area, by far, is Buena Vista Street in Disney California Adventure Park. The decorating style is classical and vintage, which pairs perfectly with the theming and feel of Buena Vista Street. It's all tied together by the large, beautiful Christmas tree at the end of the street, complete with adorable old Disney-style toys and ornaments. Of course, across the Esplanade, Disneyland decorates the park just as beautifully with the giant Christmas tree in Town Square, the lovely garland and lights up and down Main Street, and the poinsettias surrounding Walt and Mickey, culminating at the snow-capped spires of Sleeping Beauty Castle. Whether you haven't seen the park at the holidays before or it's your 100th time, you'll still likely be mesmerized and amazed at how beautiful it all really looks. 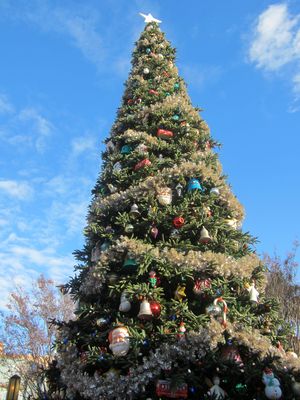 For my family, every trip to Disneyland requires hanging out with the characters, and even they get in the holiday spirit! Whether it's Mickey and Minnie in their holiday sweaters or Goofy dressed up as Santa, you'll be sure to get a few great pictures for the family album. Also, don't forget your picture with Santa himself. The big guy appears in multiple locations throughout the resort and you'll want to make sure to check out each location as his outfit and the background of the photo changes per location. Make sure you get the whole collection. 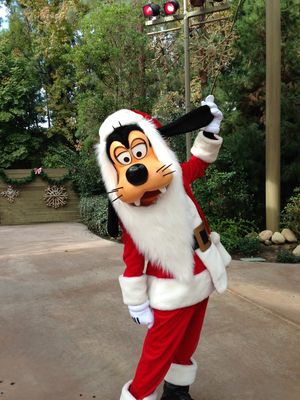 The holiday spirit extends to many of the Disneyland Park attractions as well, just be prepared for longer-than-usual lines.

While it's been open since mid-September for the Halloween season, Haunted Mansion Holiday, with its Nightmare Before Christmas overlay, also works as a Holiday Time attraction at Disneyland. I actually find the attraction focused much more on the winter holiday season than Halloween, so I feel it's more appropriate during this time of year. Also, the feeling of the holidays helps make the gingerbread house in the ballroom a little more festive. Fastpass is available for this one, but if you are in the longer line listen for the "Scarols" - and sing along!

For many, the main attraction for the holiday season at Disneyland is "it's a small world" holiday. Adorned in thousands of colored lights, the front façade of the attraction is a sight to behold on its own. I highly recommend making your way over there before sunset one night to watch the lights come on for the first time. There's nothing quite like it. I'm not the world's biggest fan of "it's a small world" during the rest of the year, but I absolutely love this one. The attraction adds the songs "Jingle Bells" and "Deck the Halls" to the classic Sherman Brothers song. You'll also get nods to New Year's Eve and the Chinese New Year. This version is full of so much joy (plus some yummy holiday scents) that it's hard to not smile. 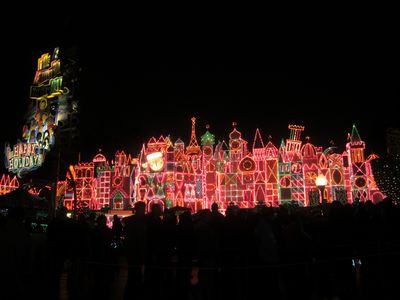 "it's a small world" holiday. Photo by Megan Walker.

The Jingle Cruise, which shows what happens when a plane drops Christmas cargo over the jungle, is one of the more recent holiday additions to the park, and I feel like it has been a successful one. Each year, it seems like they add more decor and stories, and it gets a little better. Admittedly, I'm a huge Jungle Cruise fan, so I might be a little biased, but I find the Jingle Cruise to bring a lot of holiday cheer. As with any trip through the jungle though it is very dependent on the skipper you get, so if you have a "dud" of a ride, give it another try with a different skipper before writing it off completely.

While this one isn't played up as much as the other holiday attractions, if you take a trip on this Fantasyland classic you can see how the folks in Storybook Land decorate for the holidays. It's a real treat to see the tiny Christmas trees, wreaths, and lights that adorn the buildings of our favorite Disney stories.

A Christmas Fantasy Parade is just about everything you could want in a Christmas parade (and more), and it's been running for a very long time because of this. The parade features all your favorite, classic characters, with special visits from Santa's reindeer, the snow people, the toy soldier drum corps, and Mrs. Claus and Santa Claus. One word of advice: This parade does not run in the rain. 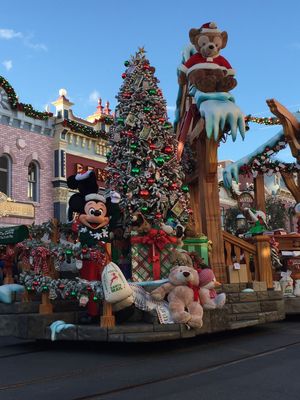 Disneyland has had many different fireworks shows over the years, but one that is always special is Believe…in Holiday Magic! I'm incredibly excited to see the fireworks back this year and can't wait to experience them again. There's something incredibly magical about these fireworks. Between the beautiful holiday composition, the decorations around the park, and the sprinkling of snow in the finale, this is one holiday experience you cannot miss. 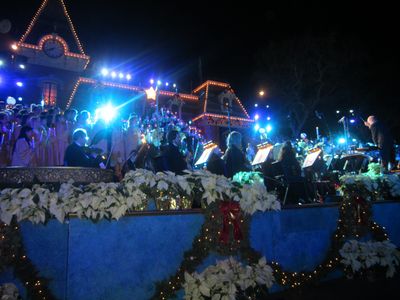 "World of Color – Season of Light"

Also new this year is the Festival of Holidays at Disney California Adventure. The Festival of Holidays (which is basically just a bigger, better, holiday-themed Food & Wine Festival) is going to feature 14 different "marketplace" booths (like at the Food & Wine Festival), featuring different holiday food and beverage offerings. The menu is out on the Disney Parks Blog now, and features a lot of different, delicious, things representing a variety of holiday treats.

Not new, but always exciting, is ¡Viva Navidad! at Disney California Adventure. This exciting celebration of Latino culture and how they celebrate the holidays is one of the best things the resort has to offer during the holiday season. Between the beautiful decorations, the delicious food, and the street party featuring the highly underrated and underused Three Caballeros, ¡Viva Navidad! is a great way to spend an afternoon.

One of the best parts of the holidays around the resort actually takes place outside of the parks at the hotels. All three hotels decorate from top to bottom with their own style of holiday decorations, and they are all equally beautiful and quite a sight to see. You can find beach-themed decorations over at Disney's Paradise Pier Hotel, rustic lodge-type decorations complete with a huge Christmas tree at Disney's Grand Californian Resort and Spa, and traditional decorations at the always classic Disneyland Hotel. You can also meet Santa Claus at the hotels in different locations.

My favorite hotel during the holidays is the Grand Californian. The giant lobby offers the perfect opportunity to capitalize on decorations, and they absolutely do. The massive tree itself is a sight to behold, and combined with the fireplace, the holiday music being played on the piano, and the gingerbread cookies and hot cider being served, you just can't beat it. Even if you aren't staying at one of the hotels on your trip, make a point to walk down there and check all three out; you won't regret it. Additionally, while you're visiting the Disneyland Hotel, make sure you stop in to Trader Sam's Enchanted Tiki Bar for some holiday-themed drinks paired with holiday-meets-Tiki music and Santa-hat adorned Tiki statues. 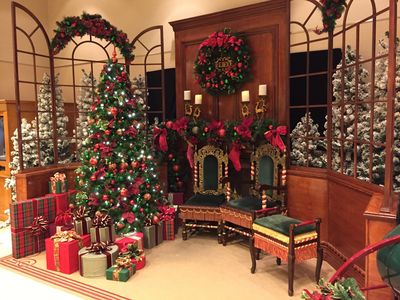 The holiday happenings don't stop at the parks and the hotels; Downtown Disney also has its fair-share. The entire downtown area is decorated for the holidays with lots of pretty lights leading the way. When you get to the end of Downtown Disney you will also find the beautiful Downtown Disney Christmas tree (and in past years, there was an ice skating rink right outside of the Disneyland Hotel). Keep an eye out for the carolers from November 24 through late December. 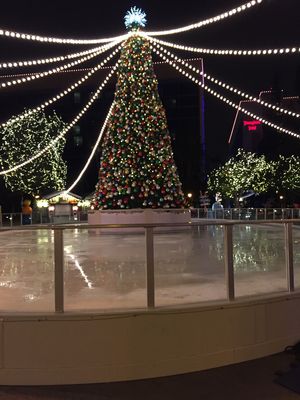 One of the other special offerings during the holiday season is the Holiday Time at Disneyland Tour. During the 2 1/2 hours, your guide will lead you around both Disneyland Park and Disney California Adventure Park, pointing out the many little holiday intricacies and stories behind the decorations. Even though I've heard these stories a few times now, they still make me smile. A fantastic benefit of the tour is that you get a reserved seat (an actual chair) for the Christmas Fantasy Parade (you also get a collectable pin). Additionally, while you sit comfortably in your chair for the parade (with no wait), you are treated to a cookie and hot chocolate, as well.

Of course, no trip to Disneyland would be complete without lots of delicious food, and one of the best times of year for Disneyland delicacies is the holidays. There are so many different delicious treats throughout the resort during the holidays it's hard to pick any favorites. Some of the best offerings though are:

One last special part of the holidays at the Disneyland Resort are the handmade candy canes that have long been a part of Disneyland holiday tradition. For a series of dates in December, the Disneyland candy-making team mixes and stretches by hand large candy canes that are both beautiful and delicious. These candy canes are fairly popular and people wait in line before park opening for up to an hour in order to get a wristband to pick up their candy cane. 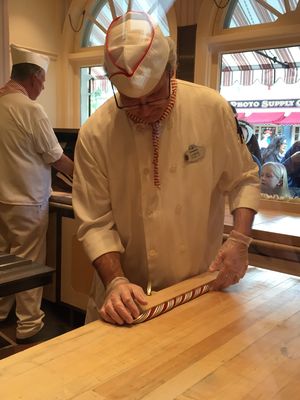 As you can see there is a lot to do at the Disneyland Resort during this time of year, and if you're planning a trip there to celebrate the holidays, you will have a very full and magical trip. Happy holidays!