Flixels to fly over Disney Springs in drone-powered holiday show

25 seconds of test footage released by Disney on Monday has become a top trending video on YouTube, and the buzz (pardon the pun) is all about how Disney will use unmanned drone aircraft to power a new nighttime show at Disney Springs this holiday season.

The as-yet-unnamed "holiday experience" was announced just days after Disney received a waiver from the Federal Aviation Administration that will allow the company to use drones in restricted airspace over the Walt Disney World Resort in Florida, and the Disneyland Resort in California.

The waiver allows for both daytime and nighttime operation of the drones, which Disney calls "Flixels," for FLoating pIXELS. The application stated the devices would operate mainly over water, and we expect the Disney Springs show to take place over Lake Buena Vista at the center of the complex. This would provide for a large viewing area from walkways all around the lake. 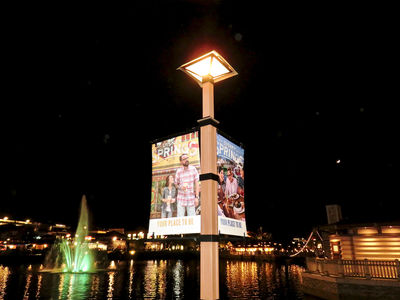 The Halloween and Fall themed banners have all been removed around Disney Springs Marketplace ahead of the installation of this year's recently announced new Christmas Tree Trail of fifteen different trees. Photo by Alan S. Dalinka.

Disney has provided no details about the new show, but the first annual Disney Springs holiday celebration begins this Friday, November 11 and runs through January 8, 2017. The Disney Springs Christmas Tree Trail offers shoppers in the Marketplace neighborhood a chance to enjoy 15 custom-decorated Disney-themed Christmas trees.

There's also a nightly Festival of Toys holiday dance party at the Once Upon a Toy Fountain in the Marketplace. where toys "magically come alive" for an interactive event that include a nightly tree lighting ceremony.

Holidays Around the World

Epcot is well on its way to becoming a year-round food festival with the addition of the Holidays Around the World offering this year, a series of booths open from November 25 to December 30. Here's a look at the menu; we'll update pricing as we have it.

Disney and ABC television outlets are producing three holiday specials to air this season, and tapings are scheduled to take place throughout Walt Disney World over the next several days, from Wednesday November 9 to Sunday November 13.

"The Wonderful World of Disney: Magical Holiday Celebration" premieres on the ABC Television Network (8:00–10:00 p.m. EST) and on the ABC app. Join Emmy Award-winners Julianne and Derek Hough as they host the magical two-hour special from the Walt Disney World Resort. They join "Descendants 2" star Sofia Carson to kick off the holiday season in a way only Disney can, showcasing extraordinary music performances, special appearances and some unforgettable Disney magic moments.

This show is hosted by Julianne and Derek Hough, joined by Sofia Carson. It will feature solo and duet performances by Trisha Yearwood and Garth Brooks, along with Kelly Clarkson and additional performers not yet announced.

"The Disney Parks' Magical Christmas Celebration" will air on the ABC Television Network (9:00–11:00 a.m. EST; airtimes vary, check listings) and on the ABC and Disney Channel apps. This Christmas, Disney Parks celebrates the joy of the holiday season, as hosts Julianne and Derek Hough take viewers on a magical ride down Main Street and beyond. The Christmas Day celebration will be bigger and brighter than ever before, bringing together the beloved Christmas day parade, magical musical performances, surprise celebrity guests and heart-warming family stories to celebrate the most wonderful time of the year.

Julianne and Derek Hough host this show, once again joined by Sofia Carson. This special will also feature solo and duet performances by Trisha Yearwood and Garth Brooks, along with Kelly Clarkson, Sofia Carson and Jordan Fisher.

Disney cast members were eligible to receive tickets to attend some of these tapings to be part of the background audience, but Disney has not made public a list of when and where the various spots will be filmed. Keep in mind that filming may be adjusted at any time due to weather or other production variables, and we never recommend making a trip to a Disney park just to see one of these performances.

However, if you're determined to head out there anyway, plan to arrive at park opening to scope out the stage and get a good position. While Disney has said that segments will be taped in all four parks, the Magic Kingdom is your best bet, and there is usually a stage set up in front of Cinderella Castle. The tapings don't usually take place until later in the day, when the sun is in the best position, but you'll want to grab a spot early. Be sure to bring sunscreen and water. The tapings can be tedious, with multiple rehearsals and takes to get everything just right, and it can get very hot waiting in the sun for hours. Wear holiday clothing or accessories, or at least solid red, white and green, and you're more likely to be selected if there's extra room in the reserved "audience" section.

The first unofficial fall Dapper Days at Epcot is scheduled to take place this Saturday, November 12. This event is very popular in California, where smartly-dressed crowds pack Disneyland for a day of fun and frolic. The East coast events are gaining a following as well, and it's well worth making a note of future events if you're a local and want to socialize with this sartorial set.

The event kicks off Friday night with DAPPER DAY EVE at The Boathouse in Disney Springs. This is an informal mixer, and no tickets are required.

The Epcot park outing is scheduled for Saturday, and attendees are encouraged to gather for one of the three scheduled performances of Big Bad Voodoo Daddy at the American Gardens Stage as part of the Eat to the Beat concert series. Performances are 5:30, 6:45, and 8:00 p.m.

The Dapper Day group also booked a private event inside the Living Seas Lounge, but tickets are now sold out.

More information about this and future events is available at the event website. The next scheduled Dapper Day event in Florida is the Spring 2017 Outing to the Magic Kingdom and Epcot on April 29 and 30, 2017.

Alan shares photos from his walks around the Walt Disney World resort. 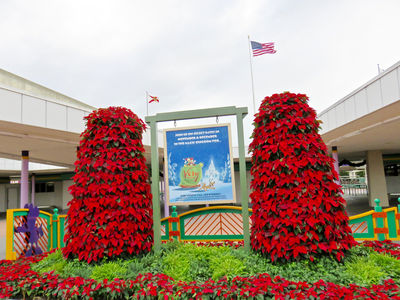 Holiday decor arrived at the Transportation and Ticket Center just ahead of the November 7 debut of the 2016 Mickey's Very Merry Christmas Party. Photo by Alan S. Dalinka. 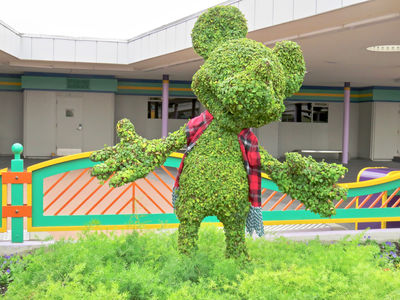 Topiary Mickey at the TTC is dressed with a scarf for the Season. Photo by Alan S. Dalinka. 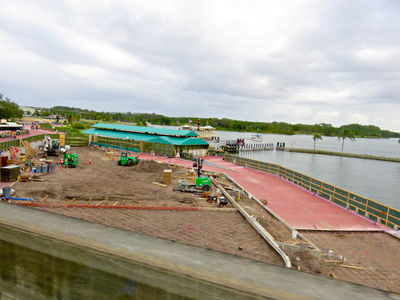 Refurbishment continues in the plaza between the Magic Kingdom Ferryboat docks next to the Resort Bus Stop just outside the security bag check tables. Photo by Alan S. Dalinka. 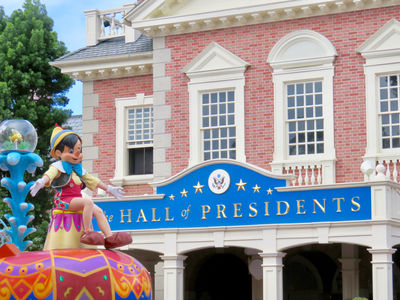 Pinocchio rides past The Hall of Presidents in the daily Disney Festival of Fantasy Parade. Given the United States Presidential Election of November 8, the Hall of Presidents is scheduled to be closed from January 17, 2017, to June 30, 2017, for installation of a new show. Photo by Alan S. Dalinka. 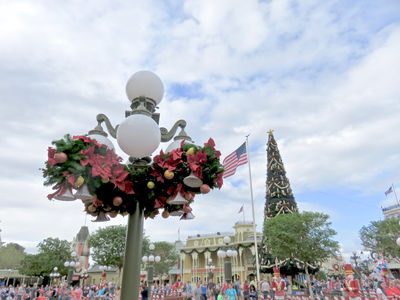 The Magic Kingdom Christmas tree is in place in its traditional spot on Main Street U.S.A. Photo by Alan S. Dalinka. 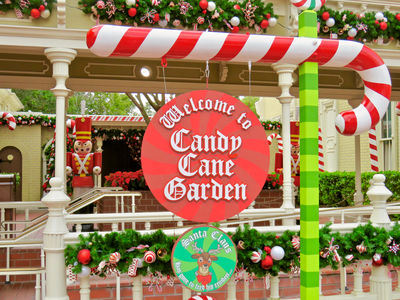 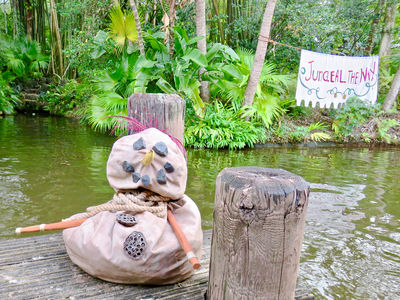 The Jingle Cruise overlay is back at the Jungle Cruise, complete with plenty of holiday themed puns. Photo by Alan S. Dalinka. 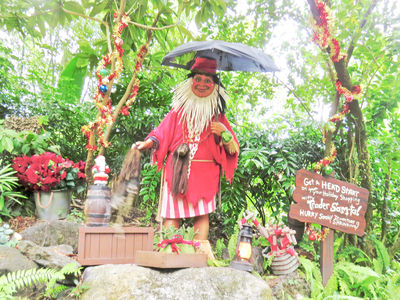 Trader Sam is now Trader Samta for the Season on the Jingle Cruise. Photo by Alan S. Dalinka. 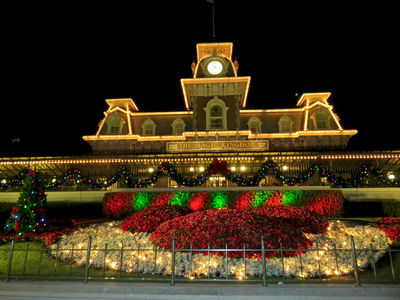 At night during the Holiday Season, the entry floral display is lit in green, red, and white. Photo by Alan S. Dalinka. 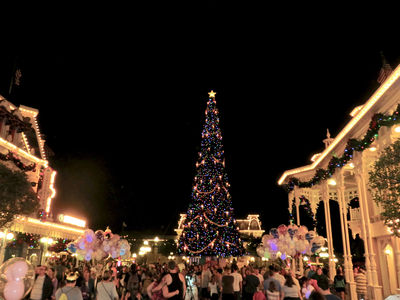 It is only the first week of November, but Main Street U.S.A. looks and sounds a lot like Christmas. Photo by Alan S. Dalinka. 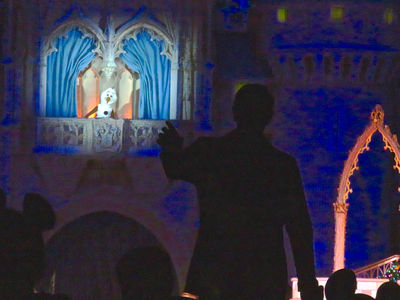 Frozen's Olaf, Princess Anna, and Queen Elsa are again on hand for nightly (often times, several times nightly) "freezing" of Cinderella Castle. Note, as shown in this photo, viewing of the characters is limited from a distance greater than the Partners Statue. Photo by Alan S. Dalinka. 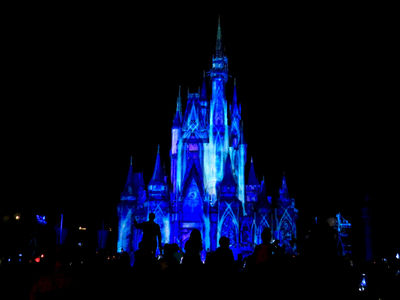 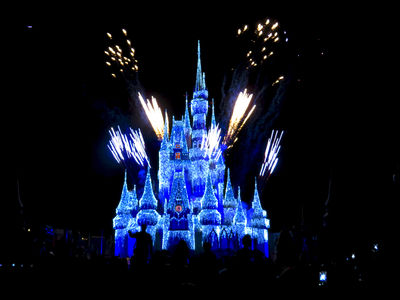 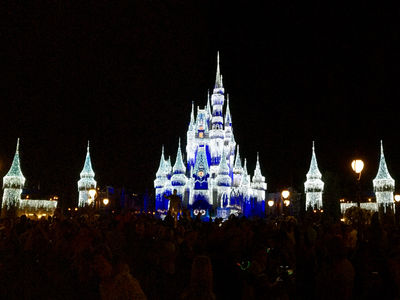 Even the newest Castle turrets added to the Central Plaza hub area are covered in Holiday Dream Lights. Photo by Alan S. Dalinka. 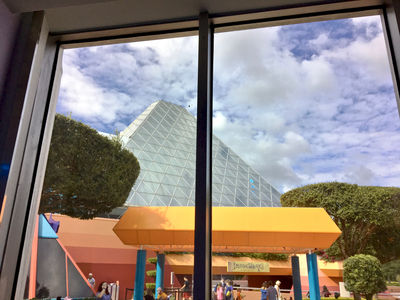 In last week's Update, we showed the outside of the new location of the Disney Visa Photo Spot; this week we take you inside. Photo by Alan S. Dalinka. 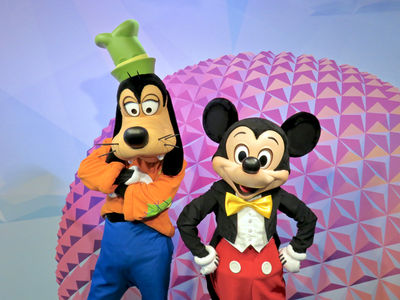 The characters inside the Disney Visa Photo Spot are not revealed until you reach the meet and greet area; your results may vary. Photo by Alan S. Dalinka. 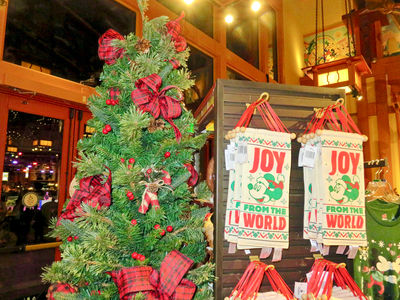 "Joy From the World" is a World of Disney take on a classic Christmas carol. Photo by Alan S. Dalinka. 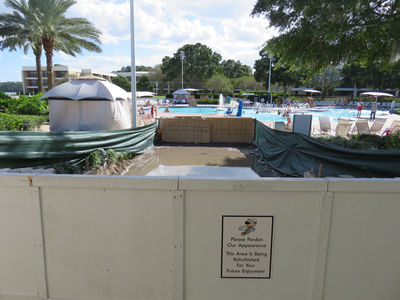 Some of the walkways and ramps around the main pool at Disney's Contemporary Resort are undergoing refurbishment. The pool remains open. Photo by Alan S. Dalinka.

...This is "Jersey Week" at Walt Disney World, the week when vacation planners are warned to expect larger crowds as New Jersey students and families take advantage of a Fall Break created by their school's participation in the New Jersey Teachers Convention. 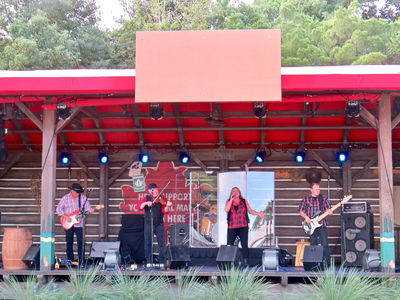 According to the MyDisneyExprience App, Alberta Bound continues to perform several times each day at the stage at the Canada pavilion, Wednesday through Sunday, until November 24, and they will be returning in January 2017 (but there is no mention of the changes or refurbishment to the Old Mill Stage sign). Photo by Alan S. Dalinka.