Disney California Adventure debuts the Festival of Holidays this year with some old favorites returning and a lot of new offerings that truly making this a multi-cultural and diverse experience you don't want to miss. When a theme park, store or a television special talks about a holiday celebration they actually mean Christmas with a quick dreidel song and a muttering of Happy Kwanzaa, but it feels like the Disneyland Resort truly got into the holidays spirits (plural rather than singular) this year with its diverse, exciting, and just plain toe-tapping fun. 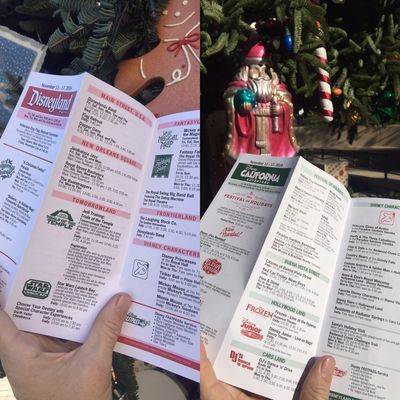 The new Entertainment Guide has listings for Disneyland on one side and Disney California Adventure on the other. Very handy! Photo by Todd Pickering.

One thing new to the holidays and to the resort is the two-sided Entertainment Guide. If you have planned a one day/holiday visit with a park hopper to exclusively hit all holiday themed events, you will be ecstatic that they are printed on the same handout. You will be hard pressed to do just all of the holiday entertainment in one day so this report will give you a leg up on how to do it all.

There is also a map for the Redwood Creek Challenge Trail which has been transformed into a meet and greet with the man himself, Santa Claus. The trail has been decorated for Christmas by Chip and Dale and you can meet those rascally chipmunks there too. 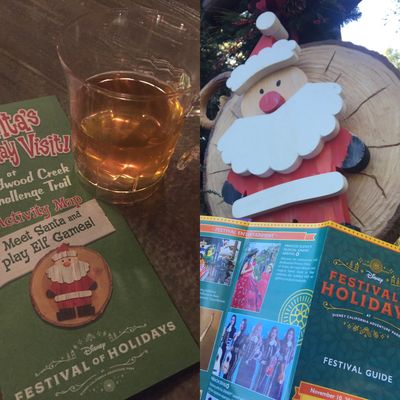 Hard cider (with bourbon) is pictured alongside the Redwood Creek Challenge Trail Holiday Guide. The Festival of Holidays Guide has description and a map of all of the entertainment and food offerings. Photo by Todd Pickering.

There are five performing groups in four different locations. There are stages set up in Pacific Wharf, Paradise Park (World of Color viewing area), and Sonoma Terrace adjacent to the restaurant Wine Country Trattoria. The last venue is an area near the Boudin Bakery Tour with a couple of benches for the quick set by the new Holiday Toy Drummers. The Red Car Trolley Boys are still performing with an addition of "Santa Clause is Coming to Town" added to their set, and Five & Dime are singing "Sleigh Ride" and "Holly Jolly Christmas" as they drive their car down Buena Vista Street.

What starts out as a very rigid and regimented routine to what sounds like a number from the Nutcracker Ballet (but is not the classic "March of the Toy Soldiers") turns into more of a free for all as the drummers start to let loose and get a little daring as they have left the toy box. One by one the drummers start to jam and break formation much to the chagrin of the leader. 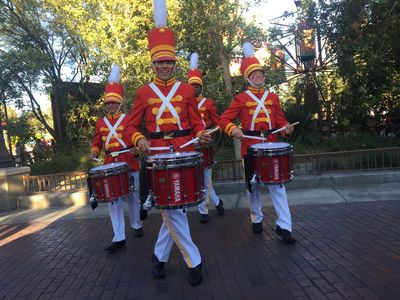 The Toy Drummers are a huge highlight of the holiday entertainment. Photo by Todd Pickering.

In the end even he cannot contain himself. When they all let loose to a rocking rendition of "Carol of the Bells" and free form and drum into a frenzy, the crowd goes wild. The performance is tight and you can tell that all four drummers are having a lot of fun. Truly a highlight for this season.

This new group starts out with an amazing fiddler and a terrific clarinetist riffing together and playing traditional Jewish hymns. Right when the crowd is curious and warmed up the lead singer Leeav Sofer starts working the crowd with his Star of David-shaped tambourine. This man is a performer who knows how to get a party started. He shares the tambourine, he waltzes with the crowd, he is on stage and off stage and even ends the whole set dancing the Hora. It is hands down the most festive holiday performance I have ever seen. 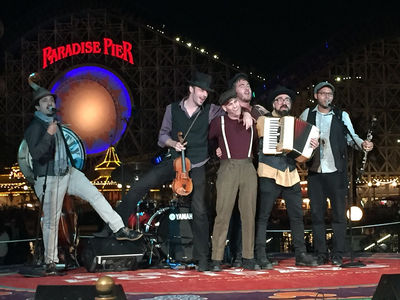 The energy and excitement that this band generated makes this a must not miss event this holiday season. Photo by Adrienne Vincent-Phoenix.

He sings in Yiddish and English, and the talented group mixes traditional Jewish songs with rock and jazz and even a little samba. There are even numbers to celebrate the Jewish culture in Spain and in the America South. Leeav's rendition of "Ain't No Sunshine" shows off his ability to flip into falsetto and really rock and roll. For you folks that can't have Hanukkah without the song "I Have a Little Dreidel," there is a nod and a wink—just the right amount. There is also a woman who fronts the band and while she has a very solid voice and nice energy it just doesn't lift into the crowd. The script sounds stilted and forced when she delivers it. It really shows the difference a performer can make in bringing the energy off of the stage and into the crowd. Mostly Kosher performs at both Sonoma Terrace and Paradise Park. 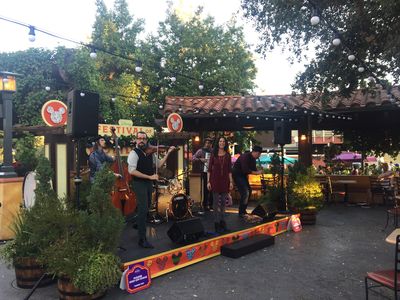 Mostly Kosher performs on the Sonoma Terrace stage right next to the Wine Country Trattoria. Photo by Todd Pickering.

Another new group is called Raise. They are a six-person ensemble—three men and three women—singing a blend of Christmas, Kwanzaa, pop, and Broadway tunes. The even perform a Lion King medley. On Friday, the second day of performing, there was a major pitch problem, and while the lead singer hit all the right notes the other five could never get their blend to mix. It may have been due to newness or too much background noise, but upon a second watching they were really tuning up more before each song and this time the harmonies were tight and soared. 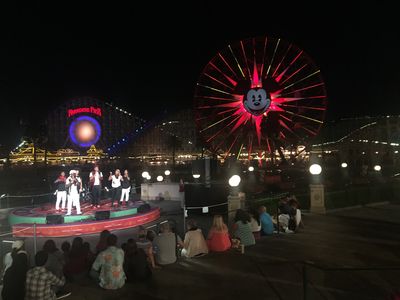 A great evening view of Paradise Pier while Raise lifts their vocals in a Kwanzaa song. Photo by Todd Pickering

They perform a diverse range of songs, like R. Kelly's "I Believe I Can Fly" and "We are a Family" from the musical Dream Girls. Their Kwanzaa number is a rendition of the "Twelve Days of Christmas" condensed into the seven days of Kwanzaa with the seven principles told to us in Swahili, and then they sing the English translation. They are sometimes a bit too relaxed with their banter and need to tighten up the set a bit. If you have teens in your group this would be a great go-to group to start with. They perform in three places: Paradise Park, Sonoma Terrace, and Pacific Wharf. 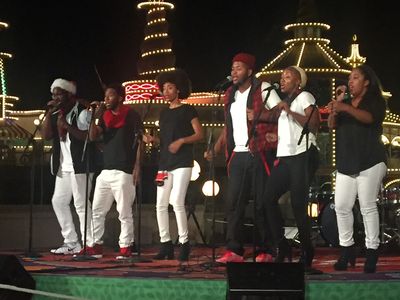 The a capella R&B group Raise is a young and energetic addition to the 2016 holiday entertainment schedule. Photo by Todd Pickering. 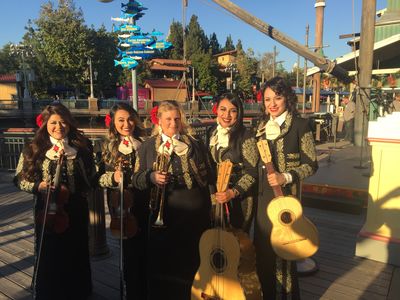 Sporting poinsettia neckerchiefs for Navidad, the Mariachi Divas are ready to entertain. Photo by Todd Pickering.

The Mariachi Divas are not new to the park, but they get to perform on a stage this year in their usual stomping grounds: Pacific Wharf. It is a treat to not have to follow them around as they traditionally roam from table to table; I hope this is a sign of things to come after the holidays are over. They start with "Jingle Bells" but also do some traditional songs like "Guadalajara" and "Cielito Linda" ( also known as "The Ay Yi Yi Yi Song").

The kids really enjoyed this set and love getting out there and dancing with the Divas. The Divas seem to really play well with their young fans. The final song of the set was a great medley of "Let it Snow" (Spanish), "Rockin' Around the Christmas Tree" (English), "Winter Wonderland" (Spanish) and "Jingle Bell Rock "(English). The blend of English and Spanish is wonderful and the crowd seemed to be divided in both languages. "Feliz Navidad" as a finale rounds out the marvelous set. 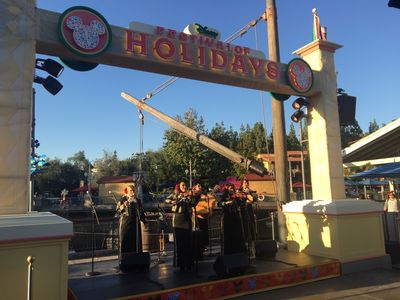 It is nice to grab a Pomegranate Margarita and sit and watch the Mariachi Divas on the new stage at the Pacific Wharf. Todd Pickering.

Diwali is the Hindu Festival of Lights that is beautifully represented by the Blue 13 Dance Company. The first number starts with a tribute to the serving up of food' it might ;seem slow and repetitive, but hang in there. The next dance starts with beautiful movement from the women. When the men are added in it keeps building in energy and excitement. When the sun is setting the dancers are back-lighted by the dusky sky are even more poignant. For the finale the kids are called down front and the troupe teaches them some dance moves. The woman who taught it was patient, clear, and full of joy. Her excitement was infectious and it paid off. The kids never lost their energy in this powerful Bollywood-style finale. This is a lovely addition to the Festival of Holidays. 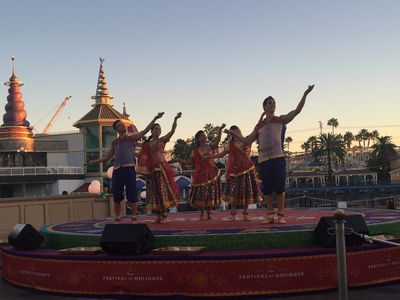 As the sun sets on Pacific Pier, The Blue 13 Dance Company brings Diwali (an Indian Festival of Light) to life with beautiful dancing. Photo by Todd Pickering.

Princess Elena of Avalor makes a grand entrance on a float up to four times a day. Her flying jaguar friend Skylar is with her and she is flanked by a large group of dancers. She sings three songs from her popular television show, and one of them is a Christmas number. There is audience participation and the ubiquitous Disney streamers for the finale. Afterwards you can meet her right near Goofy's Sky School coaster in her own meet and greet. Judging by all the little girls in Elena red dresses I expect these lines to be very long throughout the holidays. 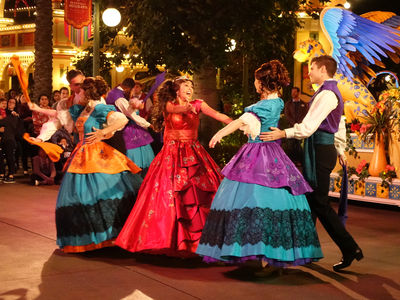 One tip about this show is that the viewing area moves after the main float arrives. Once the float safely makes the turn and parks, cast members allow the audience waiting on the east side of the viewing area to move forward about 15 feet closer to the float than they were originally told to stand. If your young children are seated along the taped line and not prepared to move, they can be quickly trampled as everyone else rushes to claim a position on the new "front row." Be alert, and listen to the cast members for any directions they give you before the show starts. 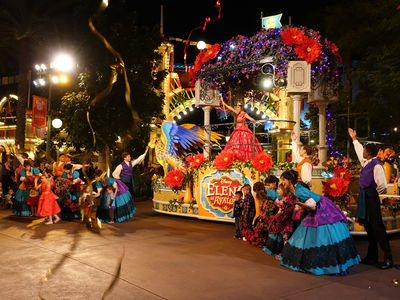 Returning for it's fourth year this parade/street party hosted by the Three Caballeros has mariachi, ballet folklorico, and Brazilian drummers and dancers. It is really a great tribute to the rich Latin American culture that makes Southern California so unique. The energy and excitement hasn't waned and if you have never seen it then you will be in for a treat. 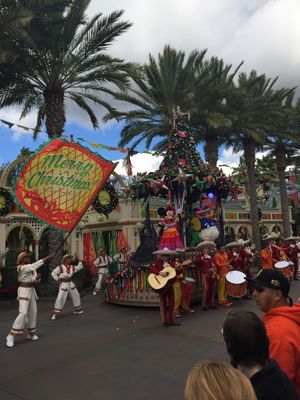 With drums, dancers, and Donald Duck, ¡Viva Navidad! has something for everyone. Photo by Todd Pickering. 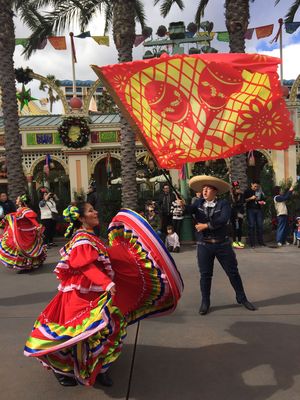 The colors and movement of ¡Viva Navidad! really put you in a festive mood. Photo by Todd Pickering.

Just a quick nod to that other lil' ol' park across the way at this festive time. Along with the parade and fireworks, all of the musical groups are getting into the swing of things with their Christmas music. Make sure to catch the Dapper Dans all dressed in their Christmas finery and pop up groups playing Dickensian-style Carols. 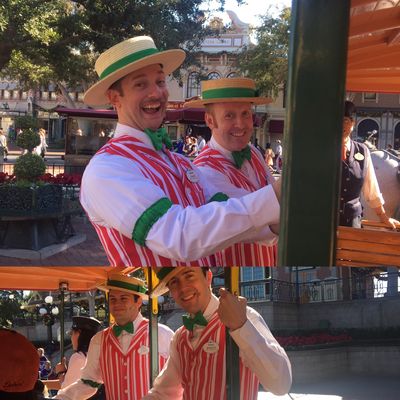 The Dapper Dans are ready for the holidays singing on the Horse-drawn Carriage. Photo by Todd Pickering. 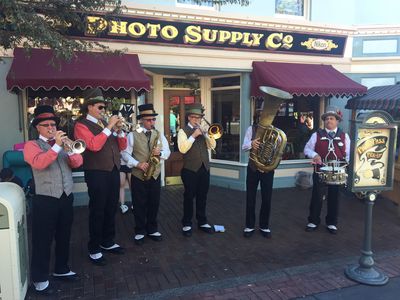 Not listed but very festive with Ye Olde Carole sound this group entertained the queue for corn dogs. Photo by Todd Pickering

Hope you all have safe holiday season where ever you are and what ever you celebrate. Festive Kwanzaa! Merry Hanukkah! Happy Christmas! Blessed Diwali! and ¡Feliz Navidad!