Thirty-Six Until (Rogue) One

Thirty-six days and counting until the official worldwide release of Rogue One: A Star Wars Story, and I remember this time last year in anticipation for The Force Awakens. The hype and the excitement are truly gearing up. As part of the hype we're seeing the action figures in stores, the Lego sets on displays, and the speculative videos from fans online. 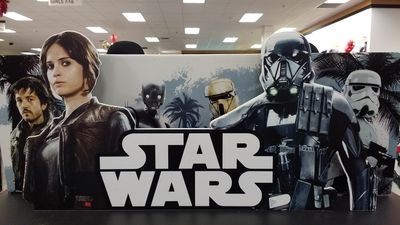 A Rogue One toy display features characters from the movie. Photo by Todd King.

All this anticipation is part of the culture of fandom, where we gather around this franchise that we love, and talk about our hopes for the story and our guesses to the plot.

Some of us get all the information we can—even spoilers—and go all-in, because we seek out as much as we can, bouncing the ideas of the movie's significant events in our minds and learning what others make of it. Some of us prefer to be surprised and have the movie take us where it takes us, making sure to avoid spoilers and online headlines so we could enter the theater with no preconceived ideas and knowledge of the plot. Others still are in between (like me)—but being a fan of something like Star Wars unites us in many, sometimes strange—but good—ways. Not only do we escape into the movie, but we find solace in each other because of a common kinship with the stories of Star Wars, which we find meaningful. With new films planned every year now for a while, we'll have more opportunities than ever to convene in friendship about our favorite galaxy.

For those who watch the trailers, there are now two new trailers for Rogue One in case you missed them. One is a short TV spot:

You may have missed this second trailer because it is the second international trailer, from Japan. You have to find this trailer reposted by fans (like below) if you can't see it on the official site. It gives us a few new shots and some seemingly updated dialog.

The dialog does seem slightly altered from previous trailers, and even the heroine, Jyn Erso, looks a little different in the scenes from the Rebel base. It could be that these cuts are just sliced together differently than in previous trailers, or those reshoots from months ago tweaked some scenes to improve them. Like The Force Awakens, there may be images we see in the trailers that don't make the release version of the movie. That's part of the fun of discussing these small details; they become hints to the creative process of the filmmakers. Making such tweaks in the editing room may mean that the director and his team continue to return to their main focus for the story's theme. Every bit of pacing and energy can affect that focus. 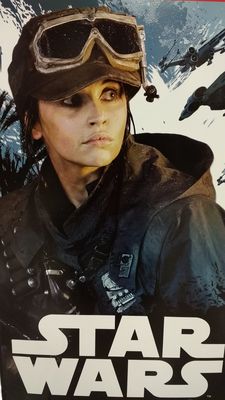 A store display shows a heroic pose of Jyn Erso for merchandise of Rogue One. Photo by Todd King.

There are other interesting details revealed in the trailers. We see Jyn receive a crystal necklace from someone who may be her mother, and which shows a connection to her family—kinship is a major theme of all Star Wars movies. The crystal itself could be very significant if crystals play a part in the battle station's weapon. We hear the Death Star called by name and we learn it does indeed fire its laser in what the character Mon Mothma referred to as a "weapons test." The ideas of power and how it is used may be components of the plot. Likewise, the ideas of fighting back in order to preserve freedom will be acted out as well. These are universal ideas we struggle with through all time and the film will hopefully draw us into that struggle through its characters and visuals. I believe that these previews are successful I'm filled more with anticipation than apprehension. I hope other fans feel the same way.

Rogue One is a new kind of Star Wars movie, and it can be difficult for fans ;to not look at the movie through the lens of the other movies and of our personal take on them. This one, like any upcoming Star Wars movie, has a lot of pressure riding on it. Movie executives at Lucasfilm and Disney must be carefully evaluate them for their potential returns. For the writers, the story must stand alone and and yet still contain those elements of Star Wars that fans love, taking a risk with the galaxy and bringing in more ideas and characters than the few we follow in the major storyline.

In addition to the introduction of new characters, I'm really looking forward to the plot points serving as pieces of information for the larger saga of the primary "episode" movies. Not only will Rogue One show us the initial theft of the Death Star plans that end up with R2-D2, but it may show us how the battle station was put together. These tidbits that will add to the mythos of the saga, and to the enjoyment of my perpetual-watching of the original trilogy.

Some rumors are circulating that in the large dark ride coming to Star Wars land (not the Millennium Falcon one, but the other), guests will be seated in trackless cars as it travels through the story of a battle between the Resistance and the First Order (that much we know), and that at some point in the journey, guests will actually disembark the vehicle. Conjecture has it that the story of the ride will put guests into the thick of the action on foot. While other information points to there being dozens and dozens of animatronic figures throughout the ride (hello Stormtrooper army), guests may be getting pretty close to them if that is true. It's possible that at some point in the story, the guests will be forced to leave the ride's path and play follow-the-leader with a costumed cast member acting as a Resistance fighter who will lead everyone through a battle to safety. That safe spot may serve as a place to get back on the main ride for the remainder of the journey. It isn't certain whether the off-and-on-again portion of the ride is truly part of Disney's plans, but it is interesting to speculate on it.

On one hand, having a part of the ride take place on foot sounds quite exciting and opens up many possibilities for interaction. Maybe you would be armed with a blaster or perhaps be given a specific task to do like on Mission Space. It would certainly make the "escape" theme of the ride a bit more thrilling! I used to dream about rides like my favorites, the Haunted Mansion and Pirates of the Caribbean, and getting to walk around in the scenes and discover new things. The only chance you may get for that opportunity is if the ride temporarily breaks down or you get on a super-secret tour behind the scenes. With this Star Wars ride, you may be part of the scene.

On the other hand, this sort of disembarking has the potential to cause a host of problems. What about accessibility for persons with disabilities? Guests in wheelchairs may be able to participate if the segment is designed to take them into account, but there would be issues with guests who do not use wheelchairs but who have mobility challenges, regardless of whether they have a recognized physical disability (for example, seniors who require more time). It's a lot to ask of guests and if the ride requires more ability, it could leave a lot of people out.

One possible option could be to provide riders with a choice between a version where you remained seated throughout the ride, and the other, which involves disembarking during the ride. Disney already provides an option at attractions (such as Mission: SPACE in Epcot). Could that cheapen the intended experience of the attraction? Disembarking in the middle of an attraction could also adds several minutes to the experience and could mess up the pacing of the attraction, not to mention wait time. Such choices could make people stand in line for a very long time, which would give a sour impression on the whole park if you use most of your day on one ride.

We can't discount Disney Imagineering. As theme park designers they have had to overcome all sorts of logistical problems; they could be inventing entire new experiences that work around these problems and make them work. We know the opening phase of Star Wars land is going to be packed and lines and wait times will be tremendous. It would be a shame if extremely long wait times continued past the initial rush. Guests would leave disappointed, and word could spread to keep away. Disney knows it can't afford that kind of publicity. Opening new parks and new attractions have had their troubles in the past, but with Star Wars land—one of their largest expansions ever—they must get it right from the start.

Attack of the Drones

As I had speculated in a previous column, Disney will be utilizing drone technology in the parks for show entertainment purposes. They've shown up in other Disney park spots and I think they will definitely show up in Star Wars land. How could drones be used? The drones could be hover droids around Stormtroopers close to the ground (like those in the movie's special edition, where the Stormtrooper was convinced that those weren't the droids he was looking for) or they could be used as part of nighttime shows. Instead of fireworks, maybe we could witness a dogfight between X-Wing fighers and Tie-Fighters. Maybe the Millennium Falcon would show up as well, and they would all be enabled with lights and sounds and projectiles that look like lasers shooting through the sky in a dramatic display of aeronautics, fireworks, and special effects live before our eyes. Drones could enhance some of these shows to great heights.

Drones could be used in many facets of theme park life and might be as transformative to the park in the same way monorails were set up in Walt Disney World as a means of real transportation. Maybe after Imagineers get to know the technology by using it in shows, they could move them on to other park services. Say you're at one of the resort hotels with doors that open to the outside and in one of these rooms you have run out of towels. Maybe you'd get drone-to-door delivery. Maybe you're in the park shopping and want something that you bought to be delivered to your resort room—Disney already offers this service, but maybe drones could be utilized for its delivery. What if drones flew around being able to carry signs that show wait-times for rides, or make announcements, or drop free Mickey ears on crowds—who knows? I'm thinking some drones could be made as personal assistants like Weebo the hovering robot in Robin Williams's Flubber. Why not? Someone we know once said, "The sky is no longer the limit."