My Disney Top 5 - Details in the Be Our Guest Restaurant

There's been a lot of excitement lately over the most recent movie trailer for the upcoming live remake of Disney's Beauty and the Beast and with good reason. I'm of the opinion that the latest in a string of live action remakes of Disney animated classics appears to be the best yet. Emma Watson looks like she's going to be a fantastic Belle. Hearing the familiar pieces of music in the trailer give me a tremendous amount of hope that Disney is going to pay fair respect to the original masterpiece while simultaneously giving us something new and wonderful to behold.

Truth be told, I've always been a sucker for Beauty and the Beast ever since I watched in awe as the original film stole everyone's heart on the big screen in 1991. The music, the characters, and the stunning animation made the film a true modern classic. To me, it was the closest thing I'd seen to what Walt and his nine old men accomplished back in the golden age of Disney animated films, and it didn't stop there. I'm not a huge fan of Broadway but I did manage to see Beauty and the Beast twice on the Great White Way. That's a record for me for sure. So, obviously, there's something about this film that has a place in my heart.

I was thrilled when I heard that the Disney Imagineers were creating a bona-fide "Beauty and the Beast mini-land" when they expanded Walt Disney World's Fantasyland back in 2012. The notion that Gaston's Tavern, Belle's cottage, and most importantly the Beast's Castle would all physically come to life in that corner of the park was pretty exciting.

While I strolled through this area soon after opening—and have spent much time there since—it took me four years to finally get myself into Be Our Guest, the restaurant located "inside" Beast's Castle. It's been a tough reservation to snag, but this past summer we were able to get in for lunch and as I imagined they would, the Imagineers hit a home run when it came to theming the restaurant. Let's take a look at the things that struck me most with my Top 5 details in the Be Our Guest restaurant. 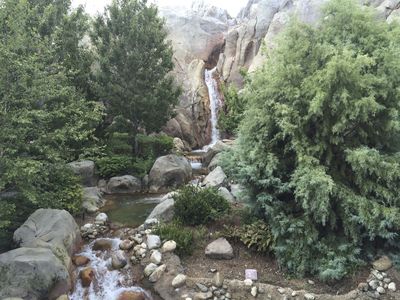 The stunning waterfall and landscaping outside of Be Our Guest brings you into the world of "Beauty and the Beast." Photo by Chris Barry.

The details begin in full force as you approach Be Our Guest. Walking over the bridge, it's hard to believe that there's actually a restaurant inside the "mountain" that appears in front of you. The landscaping and rockwork with a cascading waterfall take you away from the park crowds and transport you to Beast's Castle deep in the forest. The waterfall is a spot-on replica of the one seen in the opening moments of the film as the camera zooms in towards the castle. I think it's my new favorite spot in the Magic Kingdom. 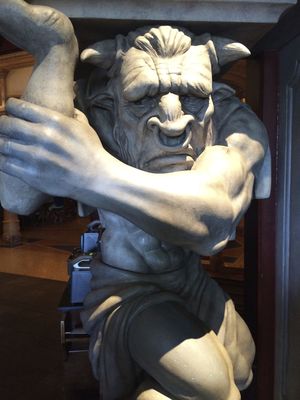 As you enter Be Our Guest two enormous Minotaur statues greet you. These statues hold up posts that form the entrance archway to the ballroom. They're richly detailed and truly feel like they would belong in the Beast's Castle. They mimic the statues that line the bridge as you make your way into the restaurant.

3 – The Tapestries in the Rose Gallery Dining Room

We ate in the Rose Gallery, most notable for the remarkable statue of Belle and Beast dancing atop a music box. While this stunning music box justifiably garners most of the attention, I was immediately drawn to the tapestries and paintings that line the walls of the room. 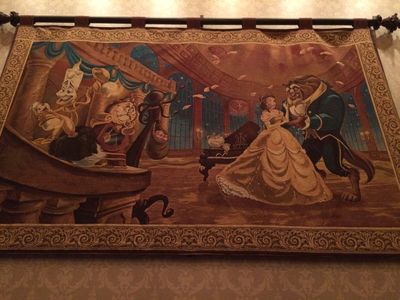 Just one of several beautiful tapestries in the Rose Gallery dining room. Photo by Chris Barry.

The paintings and tapestries represent the story of Belle, Beast, and their castle full of characters. Four of the tapestries are directly inspired from original art seen in the film. They're exceptional and shouldn't be missed.

The original film opens with beautiful stained glass windows that tell the story of the Prince and his transformation. The film comes full circle and at the conclusion we are treated to a new stained glass window that features the transformed Beast, now once again a prince, and his new love Belle. As you exit the restaurant there is a stunning representation of this stained glass window. 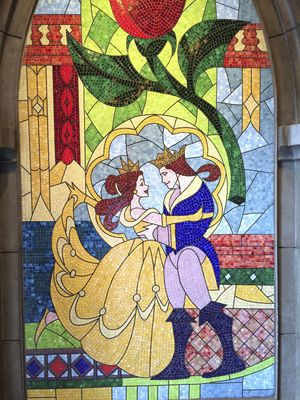 A perfect representation of the stained glass window from the ending of "Beauty and the Beast" awaits you as you leave Be Our guest. Photo by Chris Barry.

It's a work of art and I didn't even notice it as I entered the restaurant. In true Disney storytelling form, it's essentially saved as a parting detail, meant to represent the end of a meal, and therefore the end of the story.

It's amazing how something that never physically existed can have such an impact on you. This wasn't a prop from the actual film because the film is, of course, animated. Yet, as you approach the enchanted rose under glass in the West Wing, you feel as if you're seeing the real thing from the film. It's a sentimental moment for sure. The rose theme is carried throughout the entire restaurant. There are roses carved into the backs of chairs. There's a tile mosaic rose as you enter. There are roses carved in stone in the various statues throughout the restaurant. There are even roses carved into the wood surrounding the drink dispensers. But it's this rose that is at the heart of the story and therefore garners the most deserved attention. 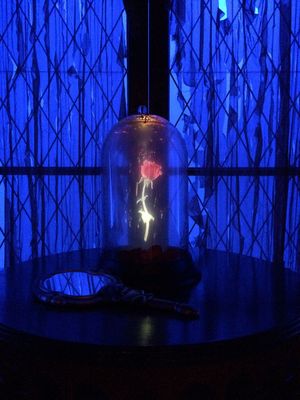 The enchanted rose in the West Wing is a highlight of any visit to Be Our Guest. Photo by Chris Barry.

If you can somehow get your request granted to dine in the West Wing, I'd highly recommend it. It's a beautiful, intimate room, and because of the enchanted rose and its falling petals, it's the most special of the three dining rooms.

The details are everywhere in Be Our Guest. When you enter the Gallery to peruse menus while you wait to order, full size suits of armor surround you. Listen carefully and you can hear them whisper. The touch screens where you actually place your order are surrounded by stacks of books, no doubt left there by Belle, the castle's resident book hound. In the same area, there's a crackling animated fireplace "warming" the room for you. Don't miss the stunning chandelier in the ballroom, which is straight from the film itself. And yes, it is snowing outside the ballroom windows just like it does in the film.

The Imagineers truly outdid themselves with Be Our Guest. As a fan it's a wonderful thing to behold. It's like walking into the animated film itself. The details are everywhere. It's a tough reservation to snag. We couldn't get into dinner here and had to settle for lunch, but it was worth it to get in and see the place. As a big fan of the original film, it's now become another very special Walt Disney World place that I hope to visit time and time again. As for the food… well let's just say… I finally got to take Lumiere's advice. I tried the grey stuff and yes it was delicious.