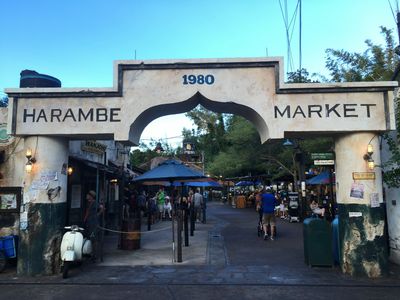 The entrance to the Harambe Market is clearly marked. Photo by Roan Poulter.

Just around the corner from the Kilimanjaro Safaris in Disney’s Animal Kingdom lies the Harambe Market. Touted as an African Counter Service restaurant, the grounds resemble an open air food market with covered seating. From time to time the sounds of African music can be heard wafting through the air from a nearby stage.

The attention to detail is amazing, made more inspiring by the fact that the motif is third-world bazaar. So that means Disney Imagineers built a perfectly good structure, then worked diligently to make it look like it was pieced together out of bits of scrap material and left to age for a decade. This is of course starkly contrasted by the interiors, which are neat and tidy. 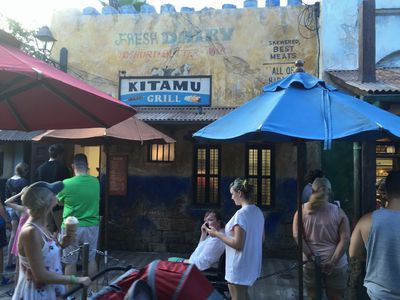 The sun can be brutal in the lines, with only occasional sun umbrellas to shield the intense rays. The largest shade structures are over family-style tables placed closely together. If they are close to capacity, the noise can be deafening. 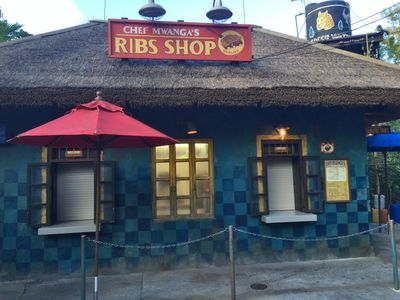 Sporadic shade umbrellas are offered for guests in line. Photo by Roan Poulter.

The most important point when making your culinary choices at the Harambe Market is to understand that the selections are identical at every location. Though at first glance they appear to specialize in different specialties; i.e. ribs, sausages or grilled foods, you can get any item at any location. This may not have always been the case and it may not always be, but it is currently. I mention this because the day we were at Harambe Market, we watched groups wait upwards of twenty minutes in line at Kitamu Grill, while there was no one in line at Famous Sausages. Again, these lines have identical choices, there are enough lines without waiting unnecessarily. Note that by the end of our meal the scenario was exactly opposite. 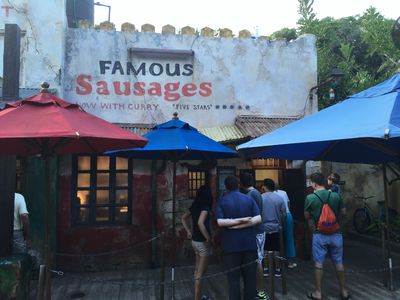 Fear not, there's more than just curry sausage at this establishment. Photo by Roan Poulter.

Grilled Chicken Skewer – Seasoned pieces of white meat chicken served on a skewer with green papaya slaw and black-eyed pea salad. The meat was still moist, though it had obviously been off the grill for some time. It was well seasoned and there was a fair helping for the cost. The green papaya slaw was fresh and bright tasting, with a citrus and vinegar bite. The black-eyed pea salad had corn and fresh tomatoes with hints of cilantro and black pepper. 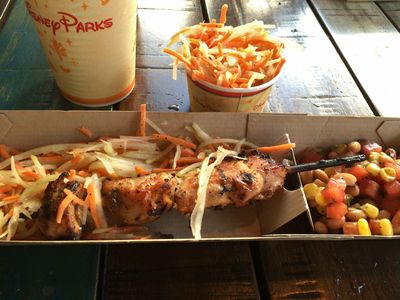 The grilled chicken skewer offers a little meat with plenty of sides. Photo by Roan Poulter.

All-Beef Gyro Flatbread – A thinly-sliced piece of grilled beef in a pita shell, served with too little tzatziki sauce and too much lettuce. Though well-seasoned in a typical Greek style, the beef was too chewy to make a good gyro. Either that or my teeth aren’t sharp enough, but either way it kept tearing through the pita bread. I suggest requesting a side of tzatziki. 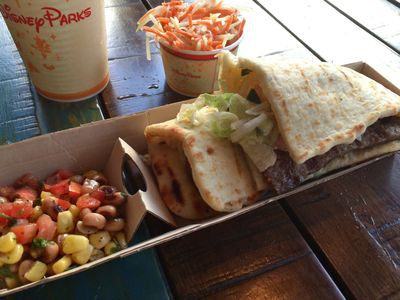 The gyro is devoid of the requisite amount of tzatziki sauce. Photo by Roan Poulter.

Overall my only complaint is a lack of selection. What seems like a multi-faceted counter service Mecca is truly a single menu divided among several points of sale. The food was well prepared and did not suffer from Disney’s Central Kitchen sickness, an affliction most prevalent at food carts, but secondary symptoms can transfer to counters; luckily that is not the case here.