Holidays Around The World - A Photo Tour 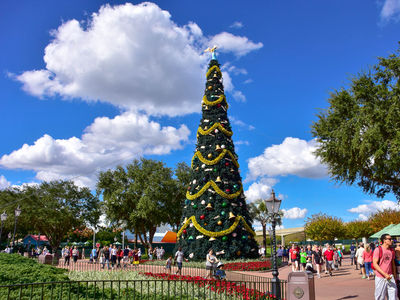 The Christmas Tree in Showcase Plaza is possibly the most spectacular Christmas decoration in Walt Disney World. One of this tree's features is that a Christmas greeting is posted in all the languages used around World Showcase. Photo by Bonnie Fink.

There's a lot to do around Walt Disney World during the Christmas holiday season. There's Mickey's Very Merry Christmas Party, which we recently covered here, there's the new holiday light show using drones at Disney Springs, Starbright Holidays – An Intel Collaboration, and much more. But one thing that's often overlooked is Holidays Around the World at Epcot, which is the focus of this month's Photo Tour. 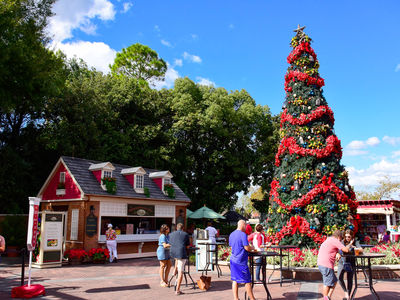 At the American Holiday Table in The American Adventure, you can have slow roasted turkey with stuffing, mashed potatoes, green beans, and cranberry sauce. These meals aren't like the samples you find at the Food and Wine Festival, but rather, they're meant to be complete meals. Photo by Donald Fink.

At Epcot, there are several special kiosks set up to provide food and beverages for the holidays, but the real prize if you're visiting Epcot during the holidays is the holiday message from all over the world. Not only can you get a sense of how various cultures celebrate Christmas, but you can learn just a little about how other cultures celebrate this time of year.

An event that shouldn't be missed if you're in the area around the holidays is the Candlelight Processional, which is a reading of the Christmas Story by a current celebrity accompanied by a 50-piece orchestra and multi-school choir as well as the Voices of Liberty and the Walt Disney World Cast Choir; it's quite an event to see and one of our favorites for the season. 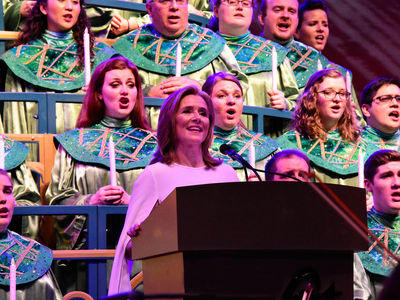 The Candlelight Processional at the American Gardens Theater is a highlight of Holidays Around the World at Epcot. Here, Meredith Vieira tells the Christmas Story from a performance in 2014. She's scheduled this year for December 13 through 15. Photo by Donald Fink.

This year the Candlelight Processional is showing from November 25 through December 30. There are usually three performances each night at 5:00 p.m., 6:45 p.m., and 8:00 p.m. Every few days a new celebrity takes over, with a total of twelve celebrities appearing this year. Our year-to-year favorite has been Whoopi Goldberg.

There are two ways to see the Candlelight Processional. First is the standby line; it's a free performance to anyone who can get in. Folks line up at the entrance and at show time, they file in until the theater is full. The second way (and best for us), is to purchase a package that includes a meal at one of the great restaurants at Epcot followed by preferred seating for one of the performances. By using a dining package, you get a great meal and you're guaranteed a seat in the theater. This year there are dining packages that include lunch or dinner, but there are also some breakfast packages available. You can learn more about the Candlelight Dining Package here.

Imagine having a great three course meal at Chefs de France, Le Cellier Steakhouse, or maybe San Angel Inn Restaurant at the Mexico Pavilion. After enjoying a meal consisting of an appetizer, entree, and dessert, you stroll around World Showcase and arrive at the American Pavilion where you enter the American Gardens Theater and see a classic performance telling the Christmas story, told by a celebrity.

One facet of Holidays Around the World that we paid little attention to in the past was the storytelling in each country. Each of the eleven countries has at least one presentation showing a bit about how their culture celebrates the holidays. For France, it's Père Noël. For Italy, it's La Befana, the good witch of Christmas. For the United Kingdom, it's a story from Father Christmas, and so on.

Each country tells a story, either with a narrator or a presentation using an example of their particular kind of celebration. We made a point to visit all of them this year and it was a good time. While it's unlikely you'll be able to see all the presentations unless you deliberately make the effort, you should stop and watch when you pass by one that's underway. You won't be disappointed. 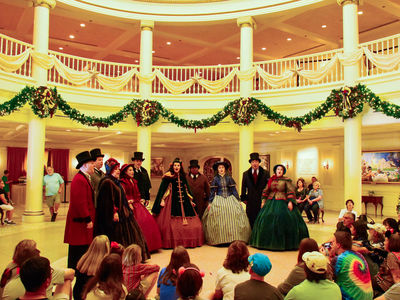 The Voices of Liberty perform at the American Pavilion all year, but during the holidays they change their show to include traditional Christmas songs. Photo by Donald Fink.

You can see an example of the Christmas show from the Voices of Liberty in this short YouTube video. Video by Donald Fink. 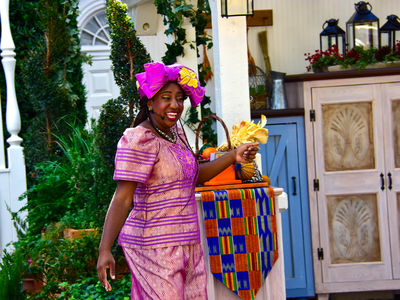 There are two storytellers at the American Pavilion. Here, the story is of Kwanzaa, an American and Pan-American message of unity and pride. Photo by Bonnie Fink. 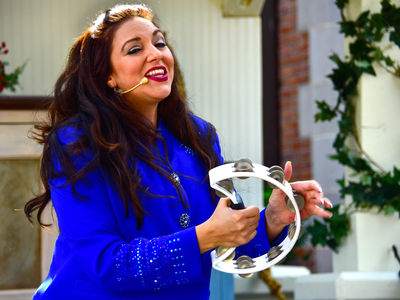 A second story at the American Pavilion is that of Hanukkah, a traditional Jewish holiday. Photo by Bonnie Fink. 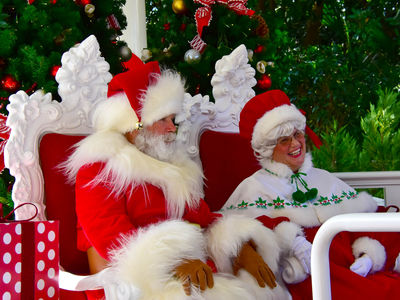 Santa Claus, along with Mrs. Claus greet children at the American Pavilion. Photo by Bonnie Fink. 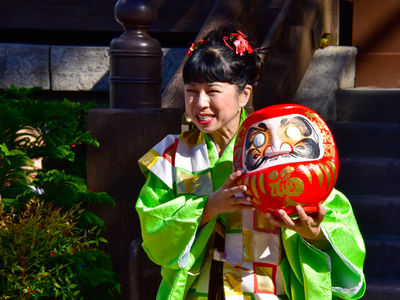 In Japan, you can hear the story of the Daruma Doll from a Daruma Doll vendor. She'll explain that these dolls are given as gifts during the Japanese New Year. Their eyes are without pupils initially, but the left eye is colored in when the owner makes a New Year's wish. When that wish comes true, the right eye is colored in. Photo by Bonnie Fink. 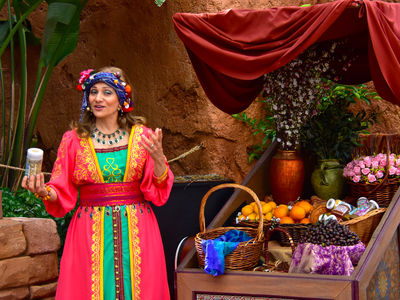 In Morocco, you'll hear about the celebrations of the harvests, and how these celebrations are the "spice of life." Photo by Bonnie Fink. 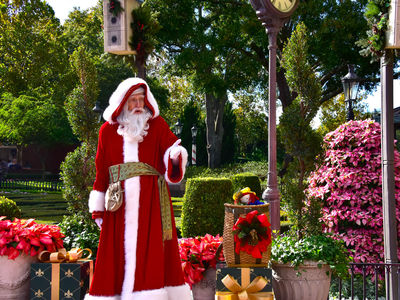 Père Noël (Father Christmas) tells the story of a young French girl on a farm in France. Her older brother doesn't believe in Père Noël until Christmas morning. Photo by Bonnie Fink. 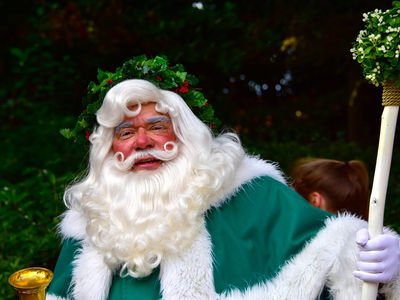 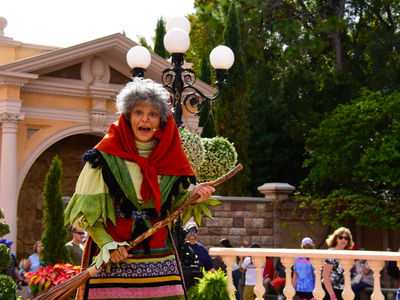 La Befana is a friendly witch in Italy that brings children a gift on the day of Epiphany. Here, she tells the story of how this tradition came to be. Photo by Donald Fink. 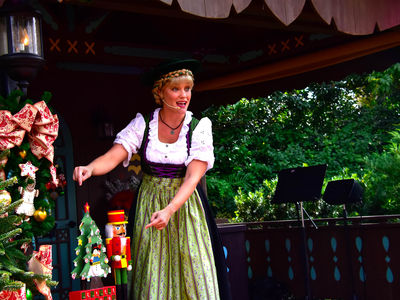 In Germany, you can see Helga and hear her story of the German girl and her dream of a nutcracker that comes to life. She also tells the story of the first Christmas tree, "O Tannenbaum." Photo by Bonnie Fink. 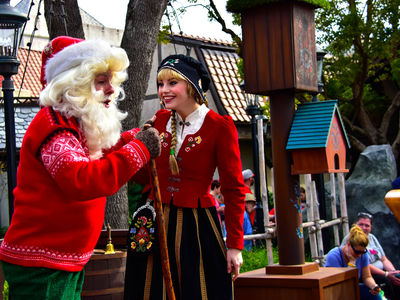 Some of the story from Sigrid and Julenissen can be seen here in this YouTube video. Video by Donald Fink. 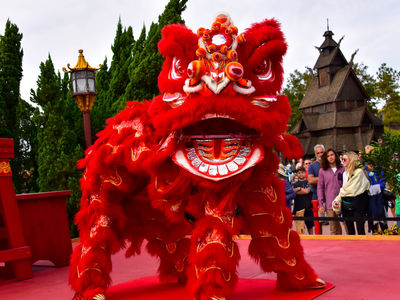 The Dance of the Lion is a Lunar New Year tradition in China. The Lion brings good luck to those who see it perform. Photo by Bonnie Fink.

Most Lion dances occur during the Lunar New Year, but can also be seen during weddings and other social occasions, or even corporate gatherings. The Lion Dance in China is usually performed around the Chinese New Year, and at other prominent times throughout the year. Thought to have originated as far back as 202 BC, the Lion Dance is performed to bring good luck and prosperity to a community. The Lion Dance performance at Epcot looks like the southern lion, based on the appearance of the costume and style of dance. Mainly, the dancers use natural movements to mimic the lion. In China, there is also a northern lion performance that is danced using kung fu movements. 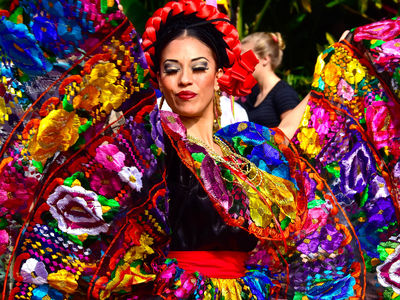 At the Mexico Pavilion, dancers accompany the mariachi performers in presenting a Christmas-inspired show. Photo by Bonnie Fink. 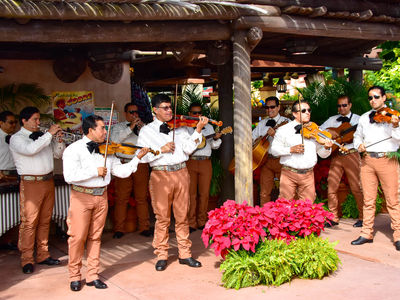 The mariachi band at Epcot, called Mariachi Cobre, changes their show for the holidays to include a Christmas-inspired performance. There are dancers and even a piñata for the children. Photo by Bonnie Fink. 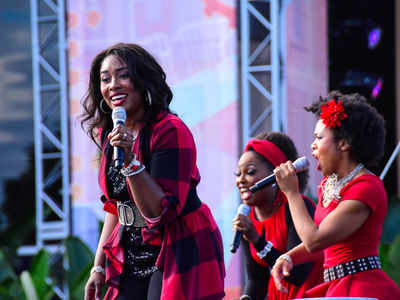 On your way to or from World showcase, you can catch a performance of Joyful! A Gospel Celebration of the Season on the big stage at Fountain View Plaza in the center of Future World. Their music, although mostly gospel in nature, is generally high energy with inspirations from R&B, Jazz, and urban styles. Photo by Donald Fink.

Another performance that occurs on the stage near the fountain is a holiday version of American Music Machine. They're a five-person a capella group that usually performs popular music, but during the holiday season they put on a special show more in focus with the Christmas spirit. They're normally located in the American Gardens Theater, but move to the fountain when the American Gardens Theater stage is set for the Candlelight Processional.

The stage in Canada has been somewhat unfocused since the departure of Off Kilter, but during the holidays you can see a group called Canadian Holiday Voyageurs. They bring music from all around Canada for the holidays. We wouldn't mind if they stayed around throughout the year. They could probably put together a pretty good show with various Canadian cultural songs.

Holidays all around Walt Disney World is, in a word, fun. But the offerings at Epcot, with the music, the storytellers, and of course, the food is well worth the visit. It can bring on the Christmas spirit for nearly anyone.