My Disney Top 5 - Ways to have a Magical Disney Chistmas

The famous Christmas carol states, "Tis the season to be jolly." Are you feeling jolly yet? I'm certainly getting there. Christmas Day is a mere nine days away, and I can guarantee you my shopping is nowhere near complete. As it is, I've only just put the lighted reindeer out on the front lawn. I'm definitely running behind but I'm also undoubtedly caught up in the magic of the season. I'm literally counting the days until the kids and I are off from school and together with my wife, we can all spend some much-needed time together as a family. As the kids get older and our oldest is busy applying to colleges, our time together is as precious as ever and there's no better time to be with each other.

I mentioned the magic of the holiday season. Christmas definitely has a natural air of magic about it. And what else do we here on MousePlanet equate with magical feelings? Why Disney of course. We fans never tire of the Disney magic. It sounds like a cliché, but those of us in the know are quick to embrace the fact that Disney lives up to all its magical connotations. That's why you're here reading about it and that's, of course, why I spend so much time writing about it. So, it only seems instinctive to blend those two sources of magic together doesn't it?

One of the things I've always loved about the Walt Disney Company is the way they have completely embraced the Christmas season. Sure it makes for good financial success. People do drop a few dollars this time of year and if they're going to drop it on anything they might as well drop it on Disney stuff. But I like to think that Disney goes above and beyond the monetary when it comes to Christmas. To me it's obvious that they've always understood that the magic of Christmas and the magic of Disney are paradisiacal, and the results of that marriage are typically quite wonderful. With that all said let's take a look at what I consider to be the Top 5 ways to have a magical Disney Christmas.

5 – Decorations around the house

Our house really does get magical this time of year. We've got everything from my grandfather's beautiful vintage Christmas ornamentation to my wife's wooden German angels, and everything in between. Of course, there are a few Disney Christmas items in that mix as well. Not too many really. I don't want them to be overpowering but just enough to make for a happy little amalgamate. These Disney Lenox figurines are a real favorite of mine. We have a few different ones like Santa Kermit, Mickey Mouse on a sled, and a few Tinker Bells wearing Santa hats, but this Mickey and Minnie pair is my favorite. They're subtly placed on a shelf in the living room and never fail to make me smile each time they catch my eye. 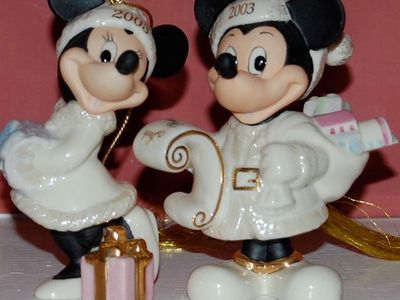 4 – Ornaments on the tree

We have two Christmas trees in our house. There's the big one in the living room that has mostly older, finer, or more delicate ornaments. Then there's one in our family room that's especially for the kids. Over the years this tree has seen its fair share of Sesame Street, Barbie, Peanuts, and Rudolph ornaments, but it's also the place for some Disney ornaments that we've collected over the years from the parks like this Spaceship Earth ornament from a Four Parks-One World set. 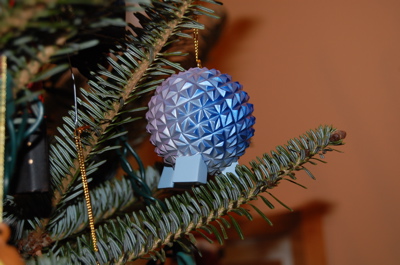 The old Disney Catalog used to sell Storybook Ornament sets. Each one of my kids has one... as do I. Here's the Brave Little Tailor from my Mickey Through the Years set. 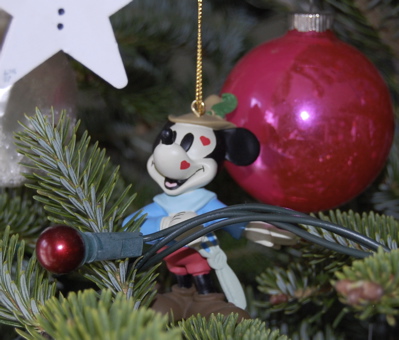 From the Mickey Through the Years collection. Photo By Chris Barry.

Even on the “grown-ups tree" a few Disney treasures do manage to find a home. These blown glass ornaments have become a recent favorite of ours. 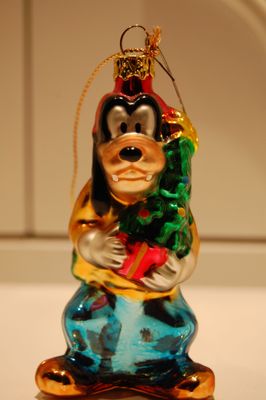 This blown glass Goofy from the Disney Store has an awfully small Christmas tree in his hands. Photo by Chris Barry.

I found these at our local Disney Store a few years back. It's the kind of thing you wish they carried more often, but then again, their ;rarity is kind of endearing and makes them that much more special to us all.

I think most people that celebrate Christmas—and probably most people that don't when you come to think about it—feel that when it comes to Christmas specials, the trifecta belongs to the big three; Rudolph, Charlie Brown, and The Grinch. I'd be hard pressed to argue with those choices, but as a Disney fan, I have a tremendous soft spot for Mickey's Christmas Carol, the retelling of the Charles Dickens classic starring our favorite mouse and his friends. 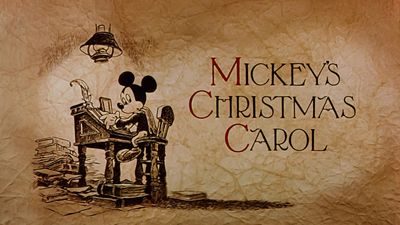 Disney did a beautiful job with this animated short film back in 1983. It's exquisitely drawn. It's heartwarming and funny and it's got the perfect blend of classic Disney characters playing the iconic Dickens roles. It seems to be more of a rarity with each passing year, but it's something I never want to miss each Christmas season.

I wrote about these Disney Christmas houses for the first time back in 2008; as each holiday season has approached in the past eight years I inevitably get emails from people searching for these treasures and asking me for information about where to find them. Every year I have to tell them the same thing—they're incredibly hard to come by, and “No, I'm not interested in selling any of mine." 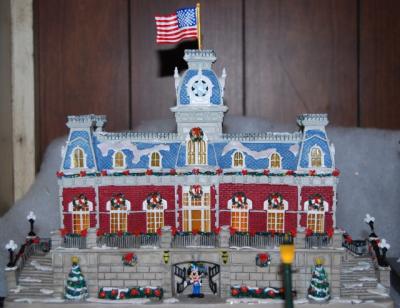 The first building to greet you at any Magic Kingdom and the first village house you meet in my living room is the train station. Photo By Chris Barry.

These collectibles were briefly available in the parks and through the Disney catalog and then that was it, never to be seen again. I adore them and it's just not Christmas in this house until I set up these five iconic Main Street USA buildings—one for each member of our family—in the living room near the tree and turn on their lights. I consider them prized possessions; they are Christmas to me.

I love winter. I've been skiing since I was four and we've always lived in the northeast. To me, Christmas is cold. Christmas is winter. With any luck there's snow on the ground or in the air on Christmas Day. However, the two times that I've actually been to Walt Disney World in early December to see the Christmas festivities, I've surprisingly felt at home. There's nothing quite like spending the evening in the Magic Kingdom, watching the Christmas parade, drinking hot cocoa, and listening to Christmas carols. Yes, I know it's Florida, but, trust me, let the crowds thin out after watching Holiday Wishes, find yourself a spot to sit on Main Street USA and watch the “snowflakes" fly. You might as well be in a small New England town on Christmas Eve. It's as perfect a Christmas moment as I've ever had. 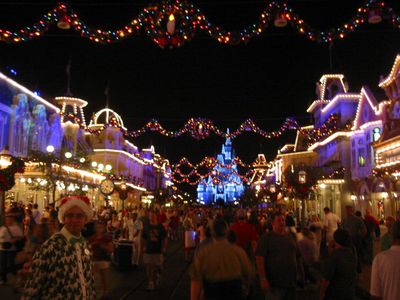 Let the crowds thin out and enjoy the "snow." Photo by Chris Barry.

Disney and Christmas are an impeccably magical match. I've often thought that the feeling I get when I'm about to enter the Magic Kingdom for the first time on a trip is akin to being a kid on Christmas morning. The anticipation is almost too much to bear. You can't wait for that moment to arrive. You bask in it and are enthralled with it while it's happening and then, of course, at the end of the day you pass out happily exhausted.

So here's to all of you big kids out there like me that keep the magic of Christmas and the magic of Disney alive during this most special of seasons. I hope you all have a marvelously magical holiday, a happy and healthy New Year, and I'll see you in 2017 with more Disney Top 5s.