A Wild Trek to Celebrate a Birthday Milestone

I recently celebrated a milestone birthday with a trip to Walt Disney World with my husband and son. For a few years, my son has been itching to go on the Wild Africa Trek at Disney's Animal Kingdom. Two things had been preventing me from going: first the cost, which is a bit steep, even for WDW, with full price tickets beginning at $189 per person; and second, the Trek involves crossing two rope bridges.

Anyone who knows me knows that I am no thrill seeker. I don't love heights, and I didn't love the idea of crossing a wobbly looking rope bridge over crocodiles. My son and I read reviews of other guests who had gone on the Trek, and when I saw they were all ages, and that I wasn't the only one with "rope bridge" nerves, with my son's encouragement, I became heartened and thought that if these folks could cross the bridge maybe I could too. I turned fifty, and decided that although I was a little nervous, I was going to do it. Fast forward to me combing for discounts to get the cost down, and a discount later, my family and I were registered for an afternoon at Wild Africa Trek. 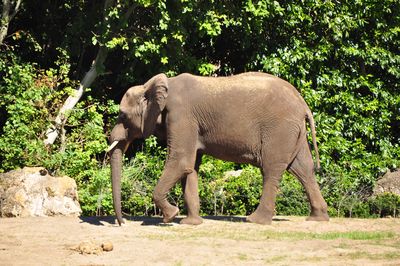 A gorgeous elephant seen from the Trek vehicle on the Wild Africa Trek. Photo by Disney. 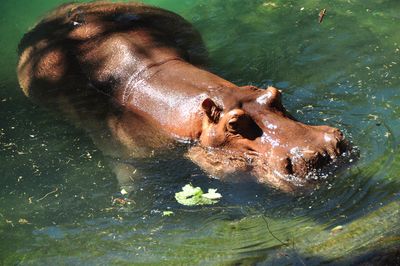 A hippopotamus up close from the walking trail on the Wild Africa Trek. Photo by Disney.

First some basics: the Trek is an opportunity to go behind the scenes—on foot and by open vehicle—to see the places and sights that you don't see on Disney's Animal Kingdom Kilimanjaro Safari attraction. Up close and personal with crocodiles and hippos? Check. An included delicious lunch served at the exclusive boma and animal viewing area? Check. Photos of your family with a giraffe who happens by your vehicle? Check. 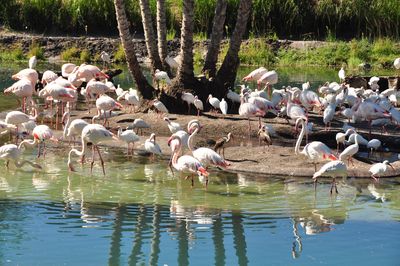 Flamingos seen from the Trek vehicle on the Wild Africa Trek. Photo by Disney.

The Trek check-in desk is to the left of Tusker House Restaurant, and you should appear at least fifteen minutes before your tour time. Guests must be at least eight years of age, and any guest under eighteen must be accompanied by an adult. You must weigh between 45 and 300 pounds. You must have on closed toe shoes with a strap to keep them on your feet. You must store personal items in a locker in the check in area. You may only bring a camera and glasses if the camera can attach to your Trek vest using a provided clip, and the glasses can be attached to the provided strap that will keep them on your person if they come off your face. 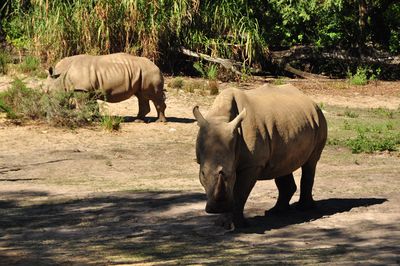 White rhino seen from the Trek vehicle on the Wild Africa Trek. Photo by Disney.

Disney photographers accompany every Trek, and the tour's price includes tons of beautiful photos of your group and of the animals you will see. At the end of the Trek, you are provided with information to download the photos, which you own. All of the photos in this article were taken by the Disney photographers. 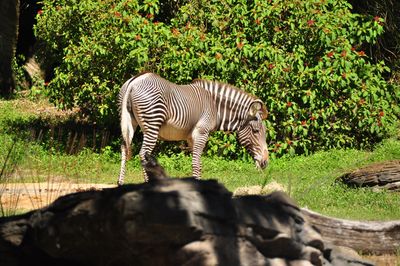 A zebra seen from the Trek vehicle on the Wild Africa Trek. Photo by Disney.

After we checked in, we stored our personal items and were weighed to be certain we were in the proper range. Next, we were outfitted with a Trek vest, a safari colored garment that was strapped around us and through our legs. We received name tags, which we attached to the Trek vest, and a water bottle that was attached to our vest with a carabiner clip. We were outfitted with wireless headsets to assist us with clear hearing of all of our guides' comments. My son's sunglasses were attached to the required strap, and my husband's camera was attached to his vest with a carabiner. All loose items need to be secured to prevent them from falling into any of the enclosures. We learned how to say hello in Swahili; it's "Jambo."

Once suited up, we took a group photo posed as our selected spirit animal. Trek groups are small, maxing out at twelve. Some people chose fish, others cats, birds… you get the idea. My spirit animal is of course Mickey Mouse, so that's who I posed as. This activity made for a great photo, and was a wonderful ice breaker to get to know our Trek guides and others in our group a bit better. 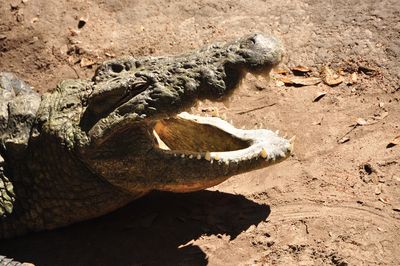 A crocodile up close, as seen from the walking trail on the Wild Africa Trek. Photo by Disney.

The Trek began on the Gorilla Falls trail, where our guides provided us with narratives of the gorillas, monkeys, birds, and other wildlife we encountered. The Trek guides are widely regarded as fun and very informed about the animals encountered. The most interesting thing I learned? That the weaver birds in the aviary weave their nests upside down, and that they do so to woo a mate. Female weavers are most interested in males with the most impressive nest building skills, so those males easily attract a mate. The next time you are in the aviary, look up. 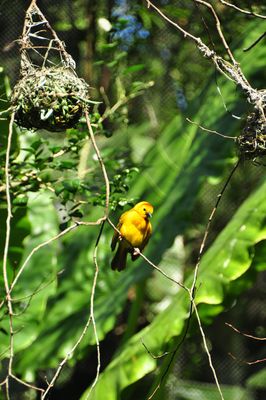 A weaver bird in the aviary on the Gorilla Falls trail, part of the Wild Africa Trek. Photo by Disney.

Next we walked through some woodsy, grassy areas and were hooked onto a cable by our vests. The cables enabled us to get right to the edge of the area overlooking the hippopotamus enclosure. Through our headsets we heard all about hippos in general, as well as the specific hippos on our tour. The Trek guides graciously answered everyone's questions, and we again all got amazing photos with the hippos. The most interesting thing I learned about hippos? That they are often submerged in water for up to sixteen hours a day to keep cool, but they can only hold their breath for five minutes. They sleep in the water, and automatically bob to the surface to take breaths. How cool is that? 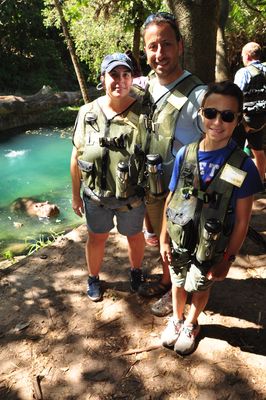 My family poses near the hippo enclosure on the walking trail on the Wild Africa Trek. Photo by Disney.

Next up, the rope bridges. We were again attached by our vests to a cable and crossed the two bridges over the crocodile enclosure one person at a time. The process for attaching my cable, as well as crossing the bridge was explained very carefully. A few people, including my son, went before me, so I could see how to get the cable attached, and how to cross the bridge. Next, it was my turn. I attached myself to the cable and off I went. 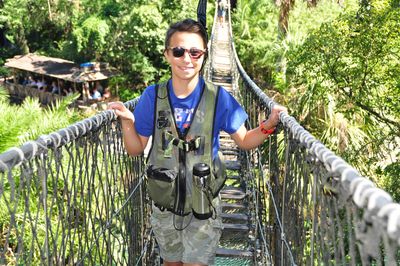 My son crosses the rope bridge on the Wild Africa Trek. Photo by Disney.

The bridges were not as wobbly as I thought, and I was the only one on the bridge when it was my turn. The view of the crocodiles was amazing. As soon as I got started, and I felt confident, I moved right across the bridge, but I did stop briefly to be proud of myself, and to let the amazing experience resonate. Midway across the last bridge, the Trek guides took more amazing photos. Fun crocodile fact? There is a serum in their blood that is a super infection fighter. The serum is the subject of multiple studies for possible application to human illness and infection. 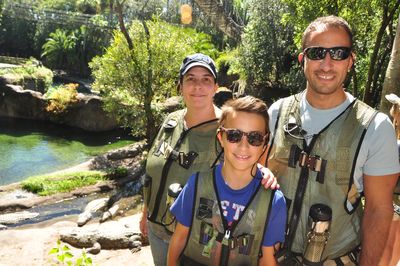 My family poses near the crocodile enclosure on the walking trail on the Wild Africa Trek. Photo by Disney. 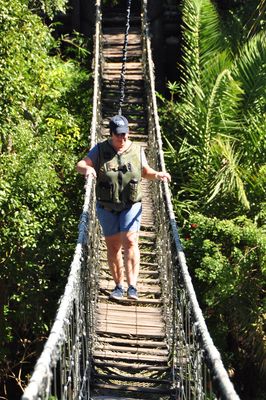 I walk the rope bridge on the Wild Africa Trek, amazed by all the crocodiles below me. Photo by Disney.

Next, we hopped into a vehicle, which looks like the Kilimanjaro Safari vehicles but is more open. We sat along the sides of the interior of the back of the vehicle with our Trek guides, as opposed to in rows on the Safari. We received a clearly and hilariously narrated ride through the savannah. Some giraffes got so close to our vehicle (we were near a feeding station) that I could see their eyelashes. We checked out some flamingos, lions, white rhinoceros, zebras, an all sorts of other beautiful animals. The Trek guides patiently answered every guest question. I love giraffes, so I was thrilled with this part of the Trek. Favorite giraffe thing I learned? They sleep between ten minutes and two hours a day, and they sleep standing up. Ten minutes of sleep needed? Oh, the things I could get done in my life if that was the case for me. 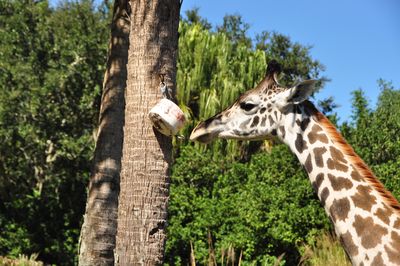 A stunning giraffe seen from the the Trek vehicle on the Wild Africa Trek. Photo by Disney. 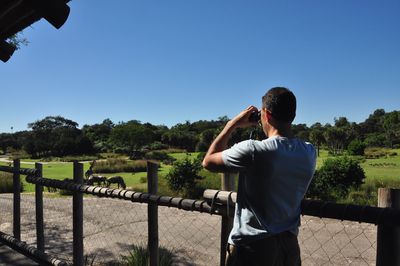 My husband checking out the savannah from the boma on the Wild Africa Trek. Photo by Disney.

After our trip through the savannah, the Trek vehicle dropped us at the boma (enclosure) for lunch. The boma has the only bathrooms on the Trek, so most people headed for those right away. Next, our guides provided us with our lunch, served in tiffins (metal stacked serving tins). We were able, prior to the Trek, to indicate food allergies and preferences. We also were served a refreshing fruit punch. We sat as a family in the beautiful, covered, open air space. There was a young cast member attending the tour on her own, so we invited her to join us. 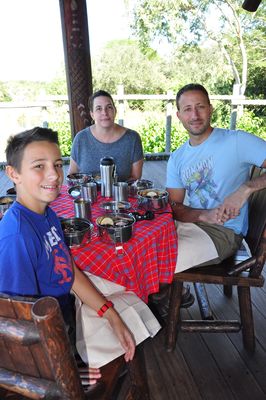 Lunch at the boma with my family on the Wild Africa Trek. Photo by Disney.

For lunch we had a beautiful and beautifully prepared meal consisting of chicken salad, hummus and pita, shrimp, smoked salmon, and smoked meats. Everything was light and thoughtfully prepared. The cast member was so friendly, and was happy to answer my son's many questions about what it's like to work at Walt Disney World. We also got up periodically to use the provided binoculars to see the nearby animals up close. Lunch in and of itself was a wonderful experience.

After lunch, the Trek vehicle brought our group back to the check in area, but not before we learned how to say thank you very much to our vehicle driver in Swahili; it's "Asante sana." We said goodbye to our Trek guides and tour mates, and got our photo download information. As we walked away from the Trek, my family agreed that it was one of the very best things we've done ever, and far and way, the best experience we've ever had at WDW. Asante sana, indeed.

Reservations for the Wild Africa Trek can be made by calling (909) 939-8687. Discounts are available for Disney Vacation Club members.