When you look at Disney souvenirs, none is more iconic than the simple Mickey Mouse watch. That classic Mickey image—black, white, and red, with his hands acting as the hands of the watch—is known the world over. Millions of children (and adults) have worn them on their wrists for more than eight decades. They've appeared in books and movies (Robert Langdon proudly wore one in the Dan Brown books and movies to remind him to stay young at heart), on TV and in many many different forms over the years (anyone else have the huge Mickey Mouse watch wall clock hanging in their room as a kid?).

What would become a beloved element of pop culture ironically got its start as many things in the Disney universe have, through the need of money. In the early 1930s, Walt Disney Productions was eternally looking for ways to raise funds to support its operations. Into the picture came a man named Herman "Kay" Kamen, who pitched the idea to the Disney brothers of using Mickey Mouse's likeness on consumer products. Walt and Roy signed off and Kay went to work.

One of his first pitches was to the Ingersoll-Waterbury Watch Company of Waterbury, Connecticut. This was during the Great Depression, and Ingersoll was on the brink of bankruptcy. He pitched the idea to them of selling a watch bearing Mickey Mouse's image, and they bought into the idea. In May 1933, the company submitted a patent application for the watch, which had a classic Mickey image with arms acting as the watch's hands. There was also a circle at the bottom with three little Mickeys chasing one another. There were two kinds of watches produced in the initial run. A wrist watch that sold for $3.25 (at one point reduced to $2.95) and a pocket watch for $1.50.

The watches were an instant hit, which made Disney millions and saved Ingersoll-Waterbury. In the first two years alone, more than 2.5 million were sold, and in 1957, the 25 millionth watch was given to Walt Disney, who never thought the watches would sell. Minnie joined the craze in the 1960s, appearing on a watch for "girls."

As the 1970s dawned, Ingersoll became Timex, and demand for the watches dropped as tastes changed. Other watchmakers jumped in with different styles and with watches featuring different Disney characters. In the 1970s, a company called Elgin took over from Timex to make the watches, and modified the basic watch design. They were followed by a company called Bradley, which was replaced in the late 1980s by Lorus. In the 1990s and beyond, it has become a free-for-all. Many different companies licensed Mickey's image and came out with a wide range of different watches.

I love it when Disney teams up with a company that's tops in its field to produce great merchandise. Mickey Mouse watches are a great example of this. Rolex (follow this link to see a vintage Mickey Rolex). Tag Heuer, Wittnauer, and Bulova are examples of luxury watch makers that have made Mickey watches over the years. These have ranged in price from a few hundred to as high as $5,000. They have popped up from time to time, usually as limited editions and not always available. Sadly, I haven't seen as many of these in recent years, though Bulova seems to have become a mainstay. If you're interested in these, keep your eyes peeled when you visit World of Disney or Uptown Jewelers. The Internet is also a great place to find these. 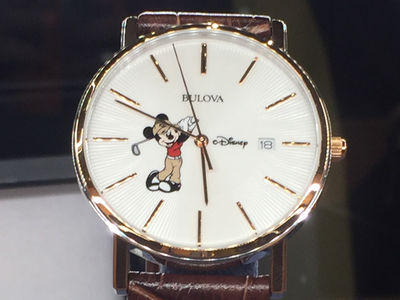 Bulova is one of several luxury watch makers that have made wonderful Disney watches. Here's one for the golfing set. Photo by Gregg Jacobs.

Bringing the price point down a notch, Seiko, Skaagen, Fossil, Timex (bringing it full circle) and Disney's own brand, Disney Time Works, have made and continue to make great watches. If you want classic Mickey, stylized Mickey, retro Mickey or just Mickey's head, you can find what you want and in any color.

This now brings us to the question of where best to find these pop culture icons. You'll be happy to know they're available far and wide, both at the Disney parks and elsewhere in a wide range of styles and prices. 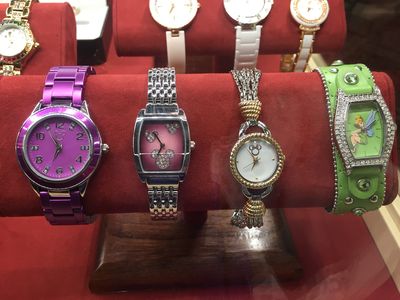 Mickey Mouse (and Tinker Bell) watches come in all shapes and colors. Photo by Gregg Jacobs.

No matter what your taste or price range, the best place to hit to pick up one of these is World of Disney at the Disney Springs Marketplace. The glass cases at the side of the room contain the "fancier" watches. These are generally the higher-end watches from Disney Time Works ($75 to $200 range) and any luxury maker watches that may be available (there were several Bulova watches there on my last visit, ranging from $150 to $300). In the center of the room, there are several racks with a wide variety of watches. These include Swatch-like plastic children's watches that you can get for as little as $14.95. Personal favorites among the adult watches include water resistant watches you can use while swimming in your resort pool and clear watches with the watch works showing behind Mickey's image. 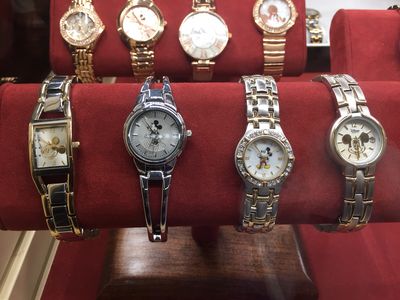 The World of Disney glass watch display has many items from Disney Time Works. Photo by Gregg Jacobs.

Another great place to visit is Uptown Jewelers on Main Street USA at the Magic Kingdom. Though the large glass display cases in the center of the room were removed in a recent remodel, there are several racks throughout the room with a variety of watches.

Epcot's Mousegear also has a great watch and jewelry section with a wide variety of watches in all price ranges.

Beyond those locations, I'd encourage you to explore all other shops, particularly the resort gift shops, each of which typically will have a watch display case. While you will see some of the same models from store to store, the selection at each place is a little different, so you never know where you'll find something that tickles your fancy. 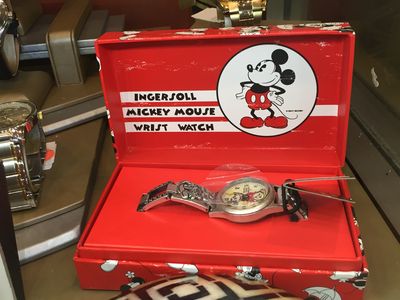 In the late 1990s, I had seen a Seiko watch in a shop a while earlier, loved it, and couldn't find it again. It had a large version of Mickey's head in the center of the face, and it glowed in the dark. Randomly, a few months later, a close friend gave me that very same model watch as a gift. She obviously knew I was a Mickey fan, but it was completely random that she gave it to me. I had never mentioned the watch to her. It was meant to be. Since then, it's been on my wrist virtually every Disney trip. For my nieces and nephews, it's become known as the "glowing Mickey head watch", which they love to bring into dark corners of the room to see it glow or look at while on Disney dark rides, where the blacklight really made it light up. After all these years, it's now a family heirloom and one of my most prized Disney items. 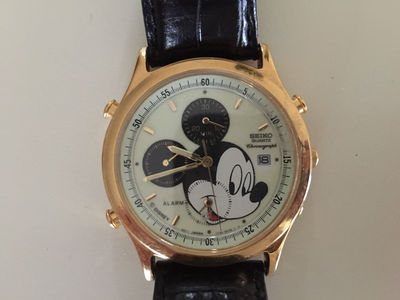 My favorite Mickey Mouse watch is made by Seiko, Circa 1999, and glows in the dark. Photo by Gregg Jacobs.

A Mickey Mouse watch, old or new, represents a great piece of history and provides great memories of a Disney experience.

Shopping Tip of the Month

You can also venture beyond the Disney parks to find some great Mickey watches, especially if you want ones of the creative or vintage variety. If you're looking for one of those classic Ingersoll watches from the 1930's, they are out there (millions were made after all). eBay is probably the first place to go for some great finds. Another unexpected place to visit on the web is etsy.com. They have many vintage and even handmade Mickey Mouse watches for sale. It's definitely worth a look.