Entertained in the Rain

Plans to attend the Lunar New Year celebration at Disney California Adventure got hijacked due to a downpour. One has to be flexible. This year the festival has been expanded to include performances not only from China but also Vietnam and Korea. Each country also has booths with food offerings, but they also were closed due to the downpour.

The festival still includes Mulan and Mushu hosting colorful dancers to herald in the Lunar New Year which can be anytime from January 21 to February 20. This year 4714 begins on January 28, the Year of the Rooster. The celebration takes place at Paradise Pier Gardens. The colors and costumes are fantastic and having seen it last year it has traditional music, drummers, and of course the dragon makes an appearance during every celebration even if it isn't the year of the dragon. There are signs up showing all 12 of the Zodiac animals along with explanations of Chinese, Korean, and Vietnamese traditions. 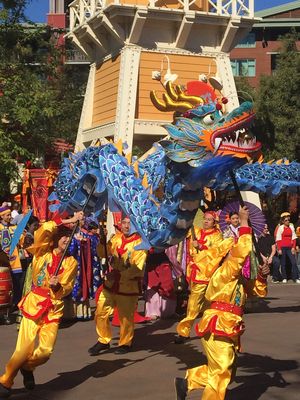 I was hoping to see the Lunar New Year like this photo from 2016. Photo by Todd Pickering. 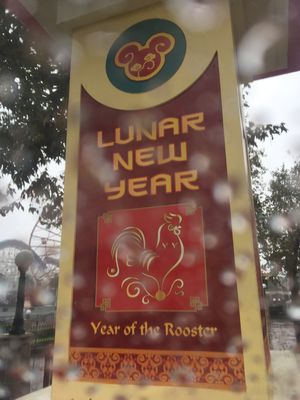 ....but the rain can dampen your ringing in of the Year of the Rooster. Photo by Todd Pickering.

Disney California Adventure has the best two theatres for the rain: Frozen – Live at the Hyperion and Disney Junior – Live on Stage! These two are definitely your best bets to get out of the wet. When the rain starts pounding and you are having a hard time looking at your Entertainment Guide while juggling your umbrella, ducking into the Grand Californian Hotel is always a great idea too. The beautiful lobby boasts a grand piano near the fireplace. Listening to a live piano player while warming up around the fire with a cocoa, coffee, or Manhattan is a great way to rejuvenate and restart your day. The chairs around the fire may be taken but no worries, the comfy chairs in the middle of the lobby are plentiful and the acoustics are fantastic. 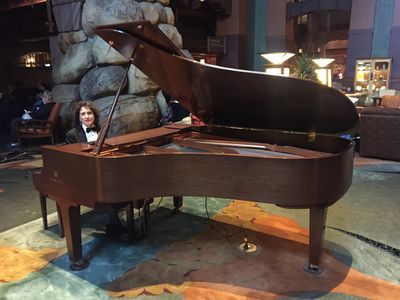 The lobby of the Grand Californian boasts a fireplace and a grand piano. Photo by Todd Pickering.

After awhile you simply cannot wait any longer for the rain to let up and must get back to some Disney magic. Main St. USA looks magical in the rain, and you can walk through the shops. When you get to the Penny Arcade you may notice that behind all of the candy is a concert orchestrion. It was manufactured in Germany in 1907 and bought by Walt himself in 1953. It has been in the park since opening day.

It sports gorgeous and fluted pipes—265 to be exact—and has a bass drum, snare drum, timpani, cymbal, and a triangle. Every seven minutes it plays a tune such as "When You Wish Upon a Star." It sounds glorious, and the music transports you to a bygone time. It truly is captivating and with the rain pouring you don't feel that push to hurry off somewhere. 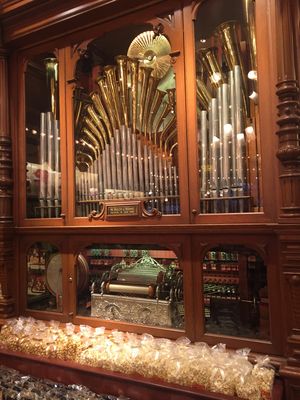 In the Penny Arcade you can check out Disneyland's Welte, Style 4 concert orchestrion; it is almost more fun to watch than to listen to. Photo by Todd Pickering.

When you get to the Coca Cola Corner you may still see rain but Andrew the ragtime piano player has been moved inside. Again, because you have no reason to hurry on, feel free to chat with him. He may gladly tell you what year and who composed the ragtime he is playing. He could expound on the three main ragtime composers: Joplin, Lamb, and Scott. Or he may tell you many theories of the derivation of the term Rag Time. Again the rain keeps you lingering just a little bit longer and you leave learning a thing or two. 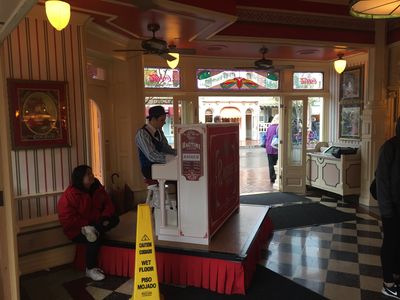 Sometimes the entertainers are fonts of knowledge on music. Photo by Todd Pickering.

Stepping outside it is still pouring down, so take advantage of a little corner overhang that has some vintage Coca Cola bottles displayed. Here you can look at your maps, apps, or Entertainment Guide and enjoy another bonus of the weather: the lights are turned on early. If you look up you may see an attention to detail that you can always encounter at Disneyland. The lights are an odd number all around this overhang and they are supposed to alternate red and white. Disneyland solved this problem by painting one white bulb half red. To some this sort of hidden detail spotting is quite entertaining. 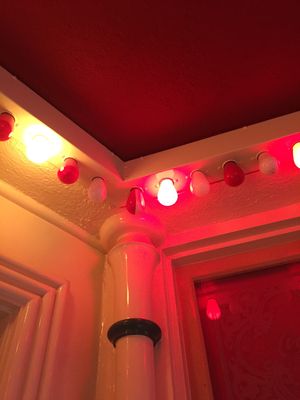 Sometimes attention to detail is highly entertaining. Look closely in the corner to see the two-colored bulb. Photo by Todd Pickering.

Noting that it looks like there is sun shining through and the rain has abated, you may want to head over to catch a group like the Bootstrappers. You have time to ride the Pirates of the Caribbean before their set but directly in front of the entrance to this attraction they are already playing. With the schedules of the day disrupted and no assurance that another cloud won't burst open, you may find music popping up all over the park. With gorgeous and sensitive instruments like a stand-up bass, the band hightails it out of there to keep things dry at the end of the set. 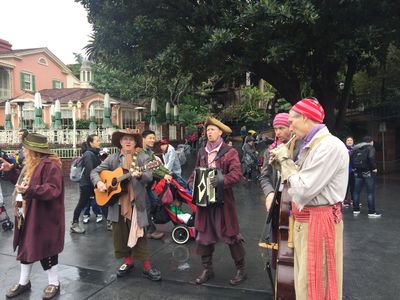 The cessation of the rain brings the Bootstrappers out for a quick set. Photo by Todd Pickering.

Bands with sensible shoes are quicker to regroup, so you may want to head back to Main Street and catch the Disneyland Band. Having had a lot of their sets cancelled, it feels like the energy of the performance is higher than usual and the crowds also want to celebrate. You will not experience such great energy from audience to band as this feeling. The glistening sidewalks that the rain has left behind make bands even more magical. 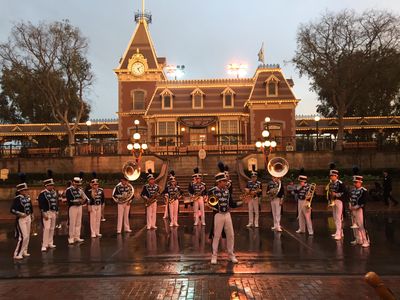 With the rain and the lights, the Disneyland Band glistens in the evening. Photo by Todd Pickering.

The Dapper Dans can sometimes be found tucked away in shops when it is rainy, but they venture out a bit in the doorway of the Clothiers next to the flower stand. Grab a cup of coffee to keep warm. You can see the gents with hands in pockets and warming themselves up. They may be cold but the harmonies are hot. 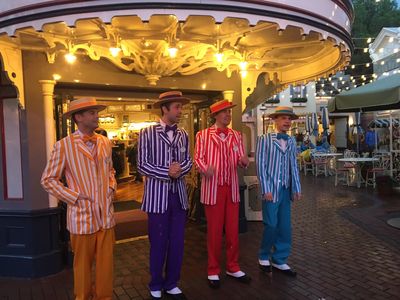 The Dapper Dans under cover in case it starts to rain. Photo by Todd Pickering.

The Show Must Go On...But Only After a Good Cleaning 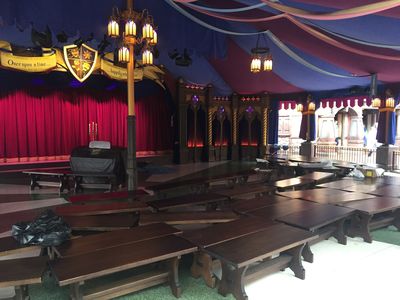 The Royal Theatre is too wet for audience members to be safe and warm. Photo by Todd Pickering.

Keep in mind that if it is too windy, water can get into The Royal Theatre seating area. That is a safety issue for guests and performers, and even for the piano. As the skies clear, the cleaning crews are working hard to get things tidied up and the Thespians back on the boards.

The Fantasyland Theatre is quite magical at night with all of the lighting effects, but you will notice that due to the heavy rains they couldn't get the main seating area as dry as they would have liked; the audience was seated back in the upper section. 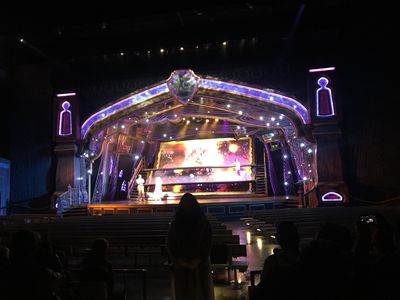 Even the rain can affect the Fantasyland Theatre "Mickey and the Magical Map" performances. Photo by Todd Pickering.

Rain does not stop the World of Color, but the wind may if it is too gusty. World of Color has had quite a learning curve. It just cannot create that synergy between the performers and the audience that live performers can do. What it can do is change more frequently. It is truly about editing and color. If the music isn't blended cleverly and carefully culminating in a crescendo it just feels like clip after clip and starts to get tedious. 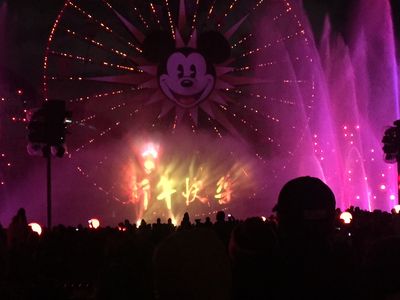 "Hurry Home" is a simple idea taken from the Lantern Festival which ends the Chinese New Year celebration. The loose story is a lost lantern rushing home to avoid missing the celebration. The themes of family and a new beginning are clear and sweet. They start with the song "Reflection" from Mulan and blend it with more traditional instruments; it's a true original rooted in the culture. The flow of the piece is smooth, and the build of the fountains into fireworks—which originated in China—makes this something very special.

It seems that the creativity bar is really being raised on World of Color and kudos to the constant changing and blending of many cultures. Having some original animation and re-working of popular Disney songs is a refreshing change from the usual clips of animation and music. I sense a positive change ahead for World of Color, and maybe more and more seasonal shows. 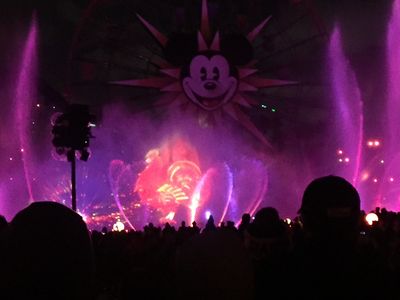 I hope this Year of the Rooster is the best ever. Photo by Todd Pickering