The Disney theme parks feature a variety of parades: Day time and night time, holiday themed and general character celebrations. Last week, the Main Street Electrical Parade returned to the Disneyland park in Anaheim. This week, in honor of this occasion, we asked the Parenting Panel: What strategy does your families use to enjoy parades at the Disney theme parks?

Chris Salata, also known as GusMan, is a Disney-inspired author, blogger and photographer. He loves to help people get the most out of their Disney vacation and co-hosts over at the Behind The Ears Podcast. Chris writes:

As they say, everyone loves a parade. My family and I are no different. However, to be very honest, it was not always that way. To be more specific, my wife and daughter love to watch every type of parade that comes down the street. My son was not all that cooperative when he was younger. We occasionally had to plan a little bit of downtime in order to help coordinate the viewing time so we can all enjoy the parade as a family.

Sound like the makings of a bribe? Well, I like to think of such plans as more of a coordinated effort.

For obvious reasons, planning a parade viewing does take a bit of coordination, while, at the same time, does require a bit of strategy. I want a prime viewing spot so my family can enjoy the event. That, I think, is a common desire for all families, to be honest. However, when you have kids that are not very tall, getting a prime viewing spot with the least number of obstructions does become high on the priority list. Even now that my kids are older, I still like to photograph the parades, which adds in several new strategies.

We found the following strategies rather helpful. 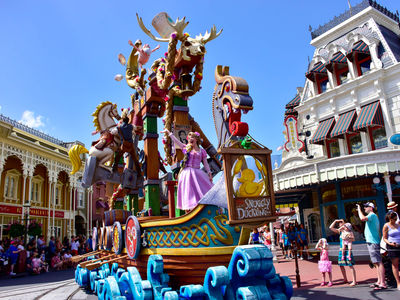 Rapunzel and Flynn Rider aboard their ship in the Disney Festival of Fantasy Parade at the Magic Kingdom in Walt Disney World. Many parade floats such as this one are large enough for guests to view, even beyond the front row seats. Photo by Bonnie Fink

As I sit here and write this, I think of parades of the past. On our very first trip, I saw my daughters eyes light up as she saw the princesses wave to her from their floats. I think it was then, that parade, that pretty much hooked me on the Disney magic. Who knew that a parade can do that to a dad?

Mary Kraemer is an avid Disney fan and a owner at Masterpiece Travels, who loves to travel with her husband and children to Disney destinations as often as possible. Mary writes:

In general, I am not a parade person. Usually, I can see a Disney parade once or twice, and then, I only check parade schedules to know when to avoid the parade route because of the crowds. Speaking of crowds on the parade route… Well, when those people are crowded along the route, it also means fewer people are in line for rides. So….I enjoy taking advantage of shorter lines and being able to get on rides easily.

However, there are some parades that I absolutely love such as WDW's Boo to You Parade during the Mickey’s Not So Scary Halloween Party and now, the Main Street Electrical Parade, which has finally returned home to Disneyland. For someone who’s not a parade person, I couldn’t be more delighted to see this amazing spectacle of a parade roll down Main Street again.

What’s the best strategy to see this parade? Well, obviously, the best spots to watch this parade are on the curb, directly along the parade route. This will require time, patience, and some blankets or towels to "stake your claim." OK, it can require a lot of time, because if you want a prime spot, such, as the curb along Main Street or at Town Square (sometimes there are benches, which are turned toward the street for the parade), you have to get there early and you have to guard your space.

This is especially important if you have little ones who want to have a front-row view of the parade. Please don’t show up 10 minutes before the parade with three kids and a big stroller, expecting to get a front-row space. The people who have been there for an hour or more are not always going to be gracious about last-minute arrivals horning into the space they’ve claimed. 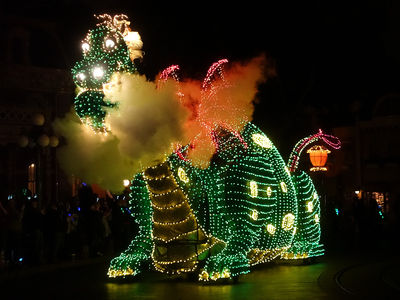 Elliot is a longtime fan favorite in the Main Street Electrical Parade. Photo by Adrienne Vincent-Phoenix

If you can’t really plan too far in advance, move away from Main Street and look for space along the parade route by the Matterhorn and the pathway toward "it's a small world." The parade either enters the park by the gates to the right of the attraction, or it ends the parade there. Generally, it’s less crowded closer to parade time, and there are a couple of levels of viewing area near "it's a small world." If you can’t get curbside, try the next level up; the view is really great.

The Main Street Electrical Parade is enormously popular. In 1996, when the parade was removed from Disneyland, people flocked to the park to see it twinkle down Main Street one last time. It moved to Walt Disney World and was really popular in the Magic Kingdom. Now that it’s back, supposedly for a limited time, I expect that it’s going to be a highlight (pun intended) of Disneyland. So, expect a lot of people will come to see it, and that will mean you need to plan ahead for your viewing spot, rather than just showing up and trying to squeeze in. At least along Main Street, there might be no actual space to squeeze in once the designated viewing areas are full. 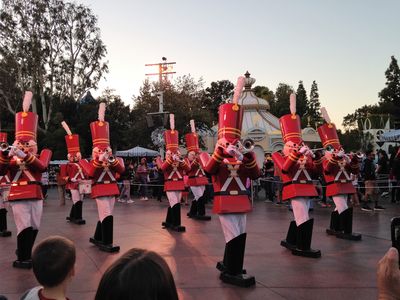 Besides floats, the Disney parades feature performers such as these iconic marching soldiers in Disneyland's Christmas Fantasy Parade. Photo by Lisa Stiglic

To be completely honest, I’m not a big fan of parades. When my daughter has marched in parades with her school band, I have always been there watching proudly from the sidelines. But a regular run of the mill parade, full of people I don’t know, does nothing for me. The exception to my distaste for parades is, of course, Disney parades, more specifically Walt Disney World parades. I’ve been a fan of the Walt Disney World parades both daytime and nighttime ever since I first stepped foot on property.

The trouble with us seeing the afternoon parades has always been that we typically travel to Orlando during the summer months. At around 3 p.m. each day, it’s pretty much written in stone that we are back at the hotel. That’s proper pool time, especially in July and August. The nighttime parades are another story because we love to be in the parks at night. We still haven’t seen the latest Magic Kingdom Festival of Fantasy Parade. I’m not too happy about that, but the pools are so refreshing after a morning in the parks aren’t they? Despite not seeing a daytime parade for a while, I do remember the days when they were a must and here are my thoughts and tips.

My kids loved the Disney walk-around characters. They loved meeting them for sure, but for some strange reason, they almost loved spotting them even more. The best places to spot a slew of your favorite Disney characters are the parades. You’ve got princesses, pirates, Winnie the Pooh, Pixar pals and my favorites, the classic Disney Fab Five. My guys would want to get to a parade, even if they weren’t right up close, just to tick off a list of characters that they spotted. It was almost like a treasure hunt for them. Later on, in my trip journal, we would compile a list of all the ones that we found during the course of the day.

As far as jockeying for viewing position goes, we never stressed about making sure we had a primo spot and, trust me, we never suffered. There was no way I was going to stake out a claim on sunbaked Main Street an hour before parade time. It never happened and we still always managed to see everything we wanted to see. The hub area in front of Cinderella Castle is another hotspot to see parades. It definitely added to the experience, but don’t think you have to be on Main Street or in front of the castle to catch a great view of the parade. That’s where everyone goes. And when everyone goes to one place, you should go someplace else. I highly recommend watching any Magic Kingdom parade from Frontierland. There are a lot of great spots along the storefront side to sit; plenty of barrels, rocking chairs, and wood crates. We’ve enjoyed many parades both day, night and holiday from back there.

My other favorite spot in the Magic Kingdom is just across the bridge from the hub in Liberty Square. We’ve gotten there at parade time and still managed to sit right at the rope, and our reward has been a perfectly unobstructed and shady viewing spot to watch the fun. The Christmas and Halloween parades seem to fit very well here with Liberty Square as a backdrop.

My other big tip for catching a good view of the nighttime parades is to see if there is a second running after Wishes and stay for that one. This typically happens during the summer and other busy times, but it’s never failed us. The last time we saw the Main Street Electrical Parade we managed quite a coup. We spent the time during the first parade and Wishes on non-existent attraction lines and then made our way to Liberty Square for the second running of the parade and it was quite empty. We had room to sit and stretch out and watch what would turn out to be our very last viewing of this Disney classic. Given the current state of nighttime parades at the Magic Kingdom, we’ll have to see if this tip stays relevant.

To sum up, don’t miss the Disney parades, they’re fantastic. Just don’t go crazy trying to get the ultimate perfect spot, because anyplace in the parks watching a Disney parade is pretty much a perfect spot—isn’t it?

It’s your turn—keep the discussion flowing!

Visit the Parenting in the Parks forum on our MousePad discussion board, and share your opinions about this topic or many others, or send your suggestions via e-mail. Reader-submitted tips might be used in a future article, and you might be selected to participate in an upcoming panel discussion!