A long time away, in a park kinda far away ... the Star Wars land/park/things now have an opening date ... no, an opening year. They will open in 2019. We don't know what month, or day, or much else. The official announcement [link] is more like a passing mention. We only know that 2019 also sees the release of the last film of the new trilogy, Episode IX, and because of that let me make an understatement: 2019 is going to be quite a big Star Wars year. I hope it all happens in May because not only would it be the 20th anniversary of Episode I, it would be the 42nd anniversary of Star Wars itself. And 42, as we know, is the "Answer to the Ultimate Question of Life, the Universe, and Everything." Why not?

Oh, That Last Jedi! Wait, what?

It is remarkable what we can discern from three little words. It was only three little words announced recently that formed the title of the upcoming Star Wars Episode VIII: The Last Jedi. Those words sent fans wondering feverishly about their meaning. What does it tell us about the story and the fate of its characters? We want to decipher the connotation of those words and later, after the movie is released, figure if we were right or not. It's a fun way to pass the time until the end of this year, unless we read too much into it and either spoil the plot for ourselves or argue with one another about actions that probably won't happen in the finished film. The words imply a plethora of interpretations, all of which are probably wrong at this point.

I'd like to take a stab at the possible significance of The Last Jedi title. First, it certainly refers to Luke Skywalker. That's pretty much it, end of story.

Moving on… no, let's step back for a moment. Luke has been called the last Jedi a few times. In Return of the Jedi, Yoda said that once he himself was gone, Luke would be the last of the Jedi. Then, in The Force Awakens, both the opening crawl and the character of Snoke say that Luke is the last Jedi. So, there we are…

Wait. If it was so easy to grasp, why would they name the movie that? That's the next question. It must mean that Luke, being the last Jedi, is our protagonist, the center of the action.

In Episode VII, Luke was not much more than the McGuffin, the reason for the action—everyone is looking for him and wants to find him first. He's like the Death Star plans in the original movie. Everyone wants the plans: from the Rebels who must deliver them safely to their leaders and to the Empire who don't want it in the hands of their enemy. But now in Episode VIII, it must be titled the way it is because we hope there will be more to this Jedi than simply being the last one.

We will hopefully find out why he is the last one and why his apprentice, Ben Solo, turned to the dark side and became Kylo Ren, who killed the other students, leaving only the teacher, Skywalker, alive. Perhaps we'll find out what caused that turmoil, or learn what Luke has been up to since those events. Did he find the first Jedi temple? (There's a theme of duality there: the first and the last) What has he learned about the Force in all this time? Most importantly, what is he going to do next?

That brings up the question of Rey. She just began to discover her powers; the Force just "awakened" in her. Will she be trained by Luke and become a Jedi? If so, that means one of them could be considered the last. And of course the word Jedi can be plural or singular so it could refer to the both of them as the last Jedi. Alas, it's all conjecture at this point.

Oh, and there's yet another theory out there saying Snoke is the last Jedi. In other words, we think we know everything when we truly know nothing. Exactly where I want to be!

The Name's the Game

Three little words can break open a great debate (read: fun overthinking) about a movie nobody has seen, so what about other titles in the Star Wars galaxy? How about the title that isn't even a title? The upcoming (2018) Han Solo movie doesn't have a name yet, but it has a working title of "Red Cup," referring to those popular plastic red cups you buy in stacks for your upcoming party. Solo brand cups. That's clever, however most often a working title keeps a high-profile movie's production a secret so that it is both elusive to spying fans and also to keep the production safe and free of price-gouging by supporting entities. So, letting the world know that "Red Cup" is Han Solo's production title mostly defeats its own purpose. Maybe they let these titles known after most of the production is in some kind of safe zone or they simply have another more-secret working name. Whatever the case, working titles are used at great service to any project. 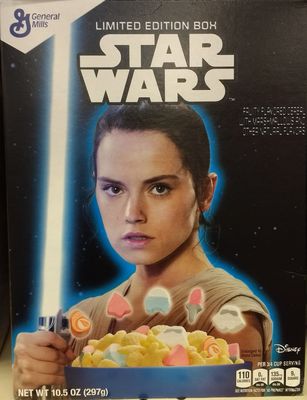 This is a cereal simply called "Star Wars." Not quite as catchy as the old C-3POs cereal from back in the day. Image Disney/Lucasfilm.

There is another Star Wars project yet to be named. For the last couple years we've been referring to it as Star Wars Land. The section of Disneyland around the bend of the Rivers of America and the expansion of Disney's Hollywood Studios will be the homes for this new land, park, area, place, thing. So, what will it actuallh be called? Just Star Wars Land? What about "The Star Wars Experience" subtly mentioned before? Will it be something else altogether? Would the working titles for this place give us any clues?

In California, cast members seem to have been told not to refer to the future Star Wars place as "Star Wars Land" but to use the words "Frontierland Construction Project" when speaking to guests. That title simply diverts attention away from its source and labels it part of Frontierland. So, that's kind of a dull title but I would like to think that including "frontier" has significance in that space is often been referred to as "the final frontier."

Science fiction fans will no doubt know that that phrase was made famous by Star Trek because of it being spoken in the TV series opening narration both by William Shatner of the original series and by Patrick Stewart of The Next Generation. Both the Star Wars and Star Trek franchises share audiences, and each often makes references or homages to the other. I'm thinking that none of that loose logic went into the "Frontierland Construction Project" name so I'm going to judge it on face value (unless it eventually is named "Star Wars Frontier"… doubtful).

At one point, perhaps during the design phase, Star Wars Land was dubbed "Project Delos." Delos could refer to the mythical and archaeological site in Greece. For Disneyland, the new Star Wars area is the largest expansion the park has ever seen and therefore it is of archaeological importance. The essence of Star Wars is very much based on myth and so, again, the Delos moniker is appropriate.

During its current construction phase, it seems to be named, "Project Atlantis," which I think simply means that the site is rising as it is being built. There are many stories of that mythical lost city; by the finding of its artifacts, we think about Atlantis rising for us to see. Who knows how many more phases of construction the park is going through, so there could be more project titles yet to come. 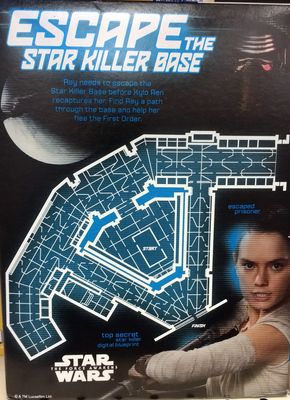 On the back of the cereal box is a maze called "Escape Starkiller Base." I'm wondering if the large future attraction in Star Wars land will share a similar name. Image Disney/Lucasfilm.

We know that there will be two major rides in the Star Wars park and while they don't have official attraction names yet, they do have working titles. One is named "Alcatraz" after the infamous island prison in San Francisco from which it was believed that no one could escape. This ride must refer to the attraction where guests get caught up in a battle and must escape from the First Order.

The other show building is going under the name "Big Bird," which references the famous Muppet from Sesame Street. The "Big Bird" name hints at the Millennium Falcon ride since a falcon is a bird, and the craft is certainly big, being the Corellian ship that it is. Disney is also associated with the Muppets, even having the MuppetVision 3-D attraction right next door to Star Tours in Hollywood Studios. Plus, Frank Oz was a performer of many Muppets and became the one who brought the character of Yoda to life. That, I believe, is a nice homage to the many connections between Lucasfilm and Jim Henson productions (remember when Mark Hamill guest-starred on the original Muppet Show?).

So, what will the final official name be for this Star Wars thing? "The Star Wars Experience"? Pretty cool, I think, but I wonder if adding the word "experience" would make it sound like there is some extra cost involved or that you're suddenly going to be forced to cosplay upon entering the park. What about "Star Wars Galaxy?" The stories all take place in "a galaxy far, far away" so why not bring it not so far away? Well, I like the name OK, but it sounds like you're going to be in outer space while the park appears to be very terrestrial, so it might be a silly kind of false advertising. "Star Wars Square?" Sounds kinda small (which it isn't). "Star Wars Streets?" I don't think "streets" when I think Star Wars. "Star Wars World?" Not bad but it's hard to speak it; it doesn't roll off the tongue so much as sputter and trip off the tongue. Well, why not "Star Wars Land?" It makes sense from a Disney standpoint since you have Adventureland and Tomorrowland and etc. To me, it sounds too kiddie and playful, maybe that's not bad, but it doesn't sound cool.

The only other title I can come up with now is "Star Wars Homeworld." It makes it sound like a centerpoint for Star Wars things, and for fans, it could conjur the feeling of going "home." There will be all kinds of aliens and inhabitants there and each of their own homeworlds will be important just as it is for the movies' characters. It could express a hint of diversity since all manner of life forms live in and pass through the movies' many settings. Plus, including the word "world" implies the size of the place as being bigger than what we've experienced before in the many Disney lands.

Star Wars Homeworld still may not be the best name so I will continue to brainstorm on this and on more of the funny, yet purposeful, working titles for Star Wars properties. Until then, do you have any proposals for the official name of Star Wars Land?