"In amusement recreation, mass diversion is no longer a dispensable luxury. Family fun is as necessary to modern living as a kitchen refrigerator." -- attributed to Walt Disney in the Disney Dream cruise ship presentation: "A Dream Come True. The Making of the Disney Dream."

Recently, I have written a few columns about my discoveries during my cruise on the Disney Dream in January. Here are a few more that I hope will enhance someone's cruising experience.

For the first time, I realized that all the entertainment is at the front of the ship and all the food is at the back. In general, the entertainment performers work four and a half months straight and then get a six-to-eight week vacation. They are housed in rooms behind the Walt Disney Theater on Deck 3. Some are behind the elaborately painted letters of the word "Dream" on the outside of the ship so they like to joke that they are "living in the dream".

The rest of the crew is housed below the guest decks. There are crew lounges, a library, a coffee bar, and a regular bar, among other amenities. The crew has its own elevators and stairways. The executives on the crew get the rooms with portholes. When nearly everyone else was having fun in the morning on Castaway Cay, I noticed several of the executive crew staff eating together in Cabanas.

For those who have traveled or are about to do so, here are some things you might want to keep in mind:

The outside of the bus currently features artwork by Disney Design Group artist Ron Cohee. 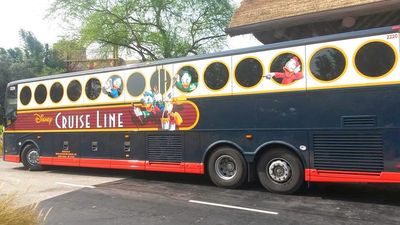 Donald and his nephews play around on the side of the Disney Cruise Line bus, based on a similar scene from the Disney Wonder ship.

"I penciled the ducks—based partly on the dimensional figures on the stern of the Disney Wonder—and, when approved, inked and painted them digitally. I painted Mickey, as well, but it was a pre-existing pose," Cohee shared with me.

On the stern of the Disney Wonder, Donald Duck is trying to paint the logo, while one of his nephews is cutting away with a pair of scissors at one of two ropes supporting the wooden swing Donald is on. Donald would then fall reasonably safely into the ocean with a comedic splash.

"I couldn't do that same gag for the bus because then Donald would hit the pavement and that wouldn't be so funny. So I came up with a similar situation where Donald is helpless and one of the nephews is painting his tail while the other is preparing to throw a bucket of paint on him," Cohee revealed. "And if you look closely, Donald is still in jeopardy of falling because one of the ropes has started to fray, but not because of any maliciousness by the nephews."

The Midship Detective Agency on the Disney Dream and the Disney Fantasy cruise ships is the latest evolution in a series of interactive games that were first available at Walt Disney World.

Kim Possible World Showcase Adventure had guests using customized cellphones (Kimmunicators that were actually a Motorola i870 phone programmed for the game) to receive clues and directions around World Showcase (Mexico, Norway, China, Germany, Japan, France, and United Kingdom) at Epcot to help Kim Possible and Ron Stoppable. The beta test was held in 2006 with the final version debuting in 2009 and lasting until May 2012.

In June 2012, the experience was replaced by Agent P's (the alter ego of Phineas and Ferb's pet platypus Perry) World Showcase Adventure that required guests to sign up and be issued an official FONE (Field Operative Notification Equipment) or their own smartphone to connect with Major Monogram and his intern Carl to get a series of clues. Up to four guests could join forces to stop Dr. Doofenshmirtz from wreaking havoc. There are seven different adventures (China, France, Germany, Italy, Japan, Mexico, and United Kingdom pavilions).

A version using cards debuted at the Magic Kingdom in February 2012 where Merlin is recruiting apprentice sorcerers to defeat Hades and his fellow villains, Yzma, Cruella, Scar, Jafar, Maleficent, Ursula, Ratcliffe, and Dr. Facilier, who are searching for four shards to create a magic crystal. There are nine quests and the guest is given a map, a Sorcerer Key Card, five spell cards, and brief training to find the 20 magic portals scattered throughout the various lands (except Tomorrowland). Merlin appears in the final portal welcoming the guest to the rank of Master Sorcerer.

The Midship Detective Agency had its soft opening on March 6, 2012, as part of the preview cruises. It opened to the general public on March 31, 2012, when the ship embarked on its maiden voyage.

The attraction follows a format similar to Sorcerers of the Magic Kingdom in that a card, rather than a phone, is used. Players use cards in the form of square detective badges with a 2-D barcode on the back to activate different Enchanted Art locations in finding clues and missing items. They have a special casebook to jot down important information.

This unique barcode, which is activated at one of the self-service kiosks, keeps track of which crime you selected to solve and your progress during your cruise. This game is self-paced and can be played at one time (about 90 minutes) or sporadically during the cruise (note, the game is only available to play during certain hours). The game card remembers where you have been and what clues you have discovered

In the rush to get on the job of solving the crime, guests often miss the nice touches at the two sign-in desks on Midship Deck 2 and 5 that are filled with various clippings. For future researchers (and those who put together ship scavenger hunts for their group) here is what is displayed on the two desks.

From the Desk of Goofy.

"Dear Mickey, Gwarsh! Still working on that case of the missing sock! The dryer is my main suspect. Kind regards, Goofy."

"Thank you for locating my hat. Who knew I was wearing it the entire time except for you. Brilliant job! You make our ship proud. Now where are my glasses? Oh, wait, here they are."

List (comments by Pepe the King Prawn in parentheses):

How To Be an Ace Detective (Pepe's notes to self)

To: Mickey Mouse Midship Detective Agency From: The ship's captain

"Mickey, congratulations on catching Pete! That despicable villain stole my dress whites and tried to dye them a different color. But you caught him red handed! Now I can still go to the formal dinner tonight. I am in your debt."

The Muppet Call Board

On Deck 4 forward port (left) there is a Muppet Call Board for the supposed show the Muppets are producing just outside the Walt Disney Theater. If you choose The Case of the Stolen Show at the Midship Detective Agency, you will be directed to find this board.

Here are some of the items posted on that board:

Daisy Duck is relaxing and reading a book in a deck chair at Serenity Bay, the adult beach on Castaway Cay. Donald Duck has snorkel gear and an inner tube for water activity at the family beach at Castaway Cay. Chip 'n' Dale are in sunglasses holding a life preserver and inflatable raft to enjoy some water fun. Mickey Mouse and Minnie are dressed elegantly and holding hands to enjoy Palo's or Remy's upscale restaurants.

Huey and Dewey with a spyglass and looking at a treasure map while Louie in a pirate captain's hat and swinging on a rope are celebrating Pirate's Night on the ship. Goofy and his son Max have golf clubs as they prepare to enjoy mini-golf on the Sports Deck 13 Aft.

The railing of the staircase has images of the faces of Mickey, Minnie, Goofy, Pluto and Donald.

Map of the Caribbean

On Deck 5 midship port (left) above the Atrium, there is an Enchanted Art map of the Caribbean. At first it looks like a typical vintage black and white map of the area but standing in front of it reveals a lot of activity. It is one of the most amusing and detailed of the Enchanted Art selections on the ship. Here are the things I spotted in the order I spotted them before they started to repeat:

On Deck 5 midship port (left) there are a series of paintings depicting different types of transportation, and I have no idea why they are there, but they are done in a stylized form befitting the art from the Golden Age of Cruising. I bet many people never see them on their entire voyage.

Also on that same deck on the aft side, before going down the hallway to the Oceaneer's Club are several brass plaques with Disney ships, but no identification. I was only able to identify with any assurance Captain Hook's Jolly Roger from Peter Pan and Mickey Mouse's steamboat from Steamboat Willie (1928), but the others were teasingly familiar.

I suspect one might be Captain Jack Sparrow's Black Pearl, but I will need to do further investigation or hope that a MousePlanet reader is sharper than a Disney historian.

I am constantly reminding Disney fans to be observant and to look at the walls, the floor and even up to the ceiling in order to discover some wonderful attention to detail. However, I am often just as oblivious and need to follow my own advice.

I can't remember the number of times I have stood in the Deck 3 lobby entrance to the Walt Disney Theater and admired the huge photo of Walt Disney, seen children interact with costumed characters, or been tempted by the nearby merchandise shops.

Yet, on my last trip, I discovered something in that location that I had never seen before: The Disney Zodiac. As you admire Walt's smiling face, look up above and you will see that there is a very detailed circular piece of brass artwork where Disney characters represent the signs of the zodiac.

Obviously, it was difficult to find perfect matches for each sign but whoever came up with the final choices did fairly well and certainly made me smile.

Here is the identification chart I put together:

The Walt Disney Theater has a 40-foot wide proscenium stage and seats 1,340 guests. Since the ship can hold up to 4,000 guests that is more than can be seated in the two shows each night. When I asked about this discrepancy in numbers, I was told that the expectation was that not every guest would go and see the shows. The Disney Magic and The Disney Wonder have a theater that seats 977 guests and have a guest capacity on the ship of 2,000, so that seems to be a little more reasonable to me.

I am preparing one more column with some interesting things I discovered on the Disney Dream about the various restaurants that should be appearing soon. Except for one glitch with a stubborn crew member last year who was in love with his status, I have always had a marvelous experience on all my cruises.