I wrote a review some months back about the grand opening of the Skipper Canteen. Since then, the restaurant's menu has gone through some re-imagining, so I thought it would be prudent to review it again to see if the changes were for the better or the worse.

From the outside, nothing much has changed at all. I still believe that the happiest servers in the whole of Walt Disney World are standing at the podium of the Skipper Canteen. Whether this is some forced animation because of the Jungle Cruise or just a hiring anomaly, it is noticeable and appreciated. Also worth noting is that a table can often be found on the same day, a unique offering in a park where sit-down meals often require months of planning.

Inside, the décor is still fantastic. It saddens me to watch so many diners eating and leaving without ever giving themselves a tour of the innumerable "in jokes" that adorn the walls. If you've ever been on the Jungle Cruise, you'll get the jokes. 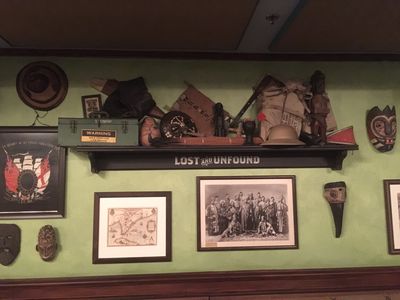 So many details adorn the walls with Skipper humor. Photo by Roan Poulter.

When our server brought out our menu with a smattering of that Jungle Cruise humor, we finally saw the much-ballyhooed changes. The menu is completely different; in fact, bearing at first glance few of the same choices. However, on a closer inspection, very little has actually changed. Names have been altered, but the dishes themselves remain. I pointed this out to our server, who assured me that with the name changes, several spice and/or taste components had been improved since our last meal. At that moment I was torn. The scientist within me urged an ordering of the same dishes to see if his claims were true. However, the cheapskate in me wanted to order some new items to expand the overall review matrix I have been chewing my way through for over a year. 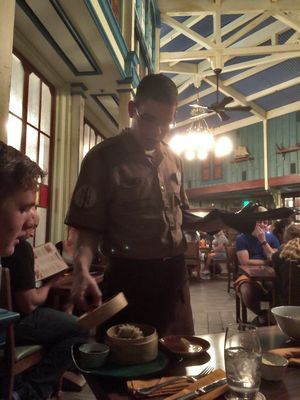 Bread and fenugreek-infused honey start the show. The bread is much improved since our last visit, but I cannot say that I enjoy the honey. It seems to me that the addition of something as simple as oil and balsamic vinegar could give a second choice for a minimal investment. 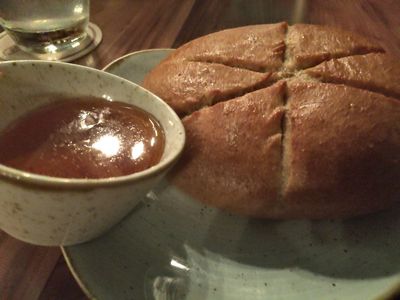 We started with the S.E.A. shu mai, touted as a legendary blend of pork, shrimp, edamame beans, and spices wrapped in gyoza skin then steamed. The shu mai dumplings were soft, yielding to bites like gyoza, but with a more substantive filling. There are many flavors, but the overall savory pork and spices dominate. This dish was a very tasty appetizer for all of us. 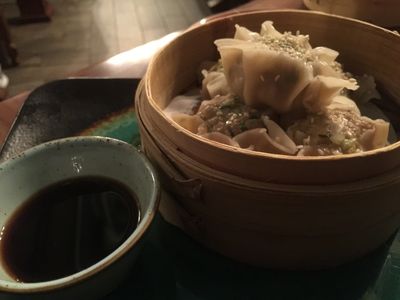 The shu mai was a highlight of our meal. Photo by Roan Poulter.

We split the char siu pork described as marinated grilled pork served with Chinese broccoli and jasmine rice. I might lean toward over-marinated as the sauce overpowered the subtle pork. However, the meat was tender and well-prepared. The Chinese broccoli was unique and cooked appropriately. 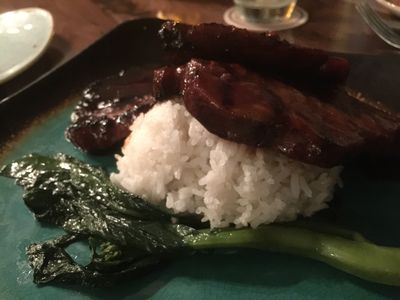 Nile Nellie's Noodle Bowl with chicken contains rice noodles in broth served with jalapeños and fresh herbs. The broth has taken a significant stride forward, and has left behind the traditional pho flavors. I applaud their choice; this dish is significantly better than it was last time. The multiple meat choices are gone, and a shift to focus on the single flavor profile seems to have yielded something unique and tasty. 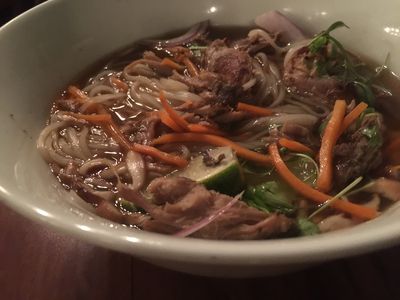 The noodle bowl no longer contains oodles of noodles, but was enough for us. Photo by Roan Poulter.

Having saved room for dessert, we tried the coconut bar with pineapple-basil compote and vanilla cream. This dessert is a vanilla chiffon cake covered with coconut and lime-white chocolate ganache. It resembles a stick of butter with white sugar kisses and pineapple ornamentation. The coconut bar is a rich and decadent dessert; each bite was filled with fresh pineapple, coconut cake, a glorious sugary sweetness, and a hint of basil. There isn't a lot of territory on this dessert, much less split three ways, but it lingers on the mind like kisses from an angel. 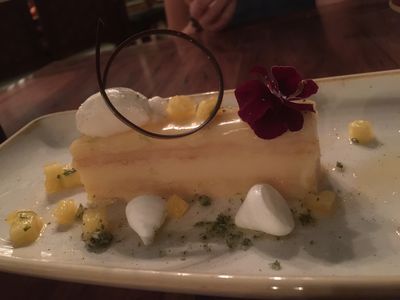 A tasty bit of dessert, wish we had ordered two. Photo by Roan Poulter

Dad (41): 4.8 of 5 – Remains a masterful tie in of theming, absolutely brilliant. The menu is better than before. I do wish they had something other than the fenugreek honey to accompany the bread.

Daughter (17): 4.8 of 5 – Sitting at the butterfly table still hasn't happened. Not sure if there's a way to reserve it.