As I write this article, winter is in full force right outside the windows of my sun room. We've been under a blizzard watch for the last day or so, and while we didn't get the two feet of snow originally predicted, there's a good 7 to 8 inches out there to contend with along with sleet, freezing rain and 40 mile-per-hour winds. The fireplace is crackling away, school is closed, and I'm sitting here in flannel pants and a thermal shirt writing about one of the warmest places I've ever been, Walt Disney World. While I most certainly love the snow and I'm beyond thrilled because I'm heading for skiing to Vermont this coming weekend, and they are in fact getting the full two feet of new snow predicted for this area, I can't help but drift off and think about being in warmer climes.

So, as I continue my series covering the best of the Magic Kingdom's magical lands, it seems only logical to turn left after touring Main Street U.S.A. last time and head into the beautiful and tropical world of Adventureland. When Walt Disney was designing his first park, Disneyland, Adventureland was intended to be a representation of his True Life Adventures nature documentaries with actual live animals. Walt said, "We pictured ourselves far from civilization, in the remote jungles of Asia and Africa." Live animals never made the final cut, but the feeling of being somewhere far away and exotic most certainly did.

Really? Of all the things there is to see and do in Adventureland, I'm starting off with a frozen dessert? Yes. Dole Whip has a legendary following, and for good reason. When I'm in the Magic Kingdom and I've been walking around in the sweltering Orlando heat, it's almost always time for a refreshing treat. In my opinion, and I know there are legions of fans out there that will agree, there's nothing better than stopping at Aloha Isle for one of these tasty concoctions. 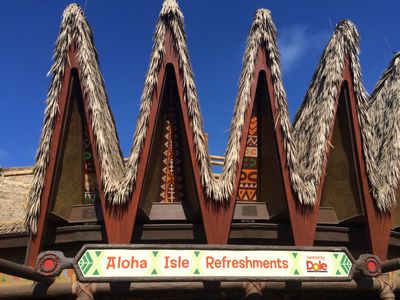 My preference is always for the float. While I have had and thoroughly enjoyed the Dole Whip soft-serve cup, I'm a much bigger fan of the Dole Whip Float. If you haven't had one, I can't imagine what you're waiting for. If you have had one, and adore them as much as I do, you might even be questioning why it wasn't number one on my list.

To me this is an overlooked treasure of the Magic Kingdom. No, there's nothing thrilling about it. It's not a ride. It has no animatronic figures. And yet, I consider it an absolute Disney classic. I've read some other popular Disney sites out there that openly mock the treehouse, and I've seen fans do the same. 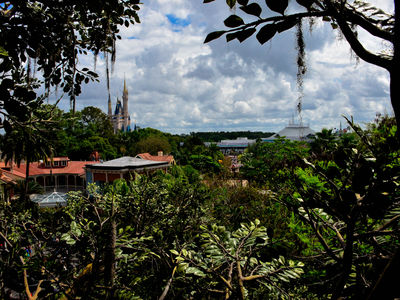 A view of the Magic Kingdom from atop the Swiss Family Treehouse. Photograph by Bonnie Fink.

Take the time to see the unbelievable amount of detail that exists here. It's the treehouse that every kid ever dreamed about. I love the different rooms, the contraptions that the family built to sustain life on their deserted island, and the one-of-a-kind view from the top tier. The next time you're rushing through to get to the land's other main attractions, make sure to give this amazing feat of Imagineering its due.

What is it about the same animatronic figures and the same corny jokes that keep people boarding the Jungle Cruise? I'm not completely sure. Once again, much like the aforementioned treehouse, there is no thrill involved here. You can see real live animals over at Animal Kingdom. There's no drop, and no plunge down the falls. It's a pretty simple boat ride through some artificial jungles right? Right. And simultaneously oh so wrong. 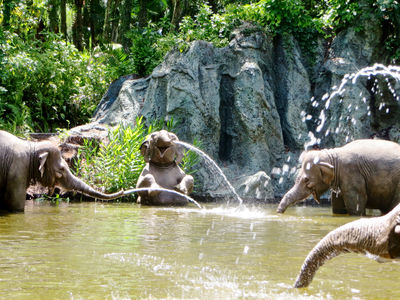 Visiting the Indian elephants aboard the Jungle Cruise is always okay: they bathe with their trunks on. Photo by Alan S. Dalinka.

Like so many things in Walt Disney World, the cast members create the fun. If you get a good skipper on The Jungle Cruise, you're in for a good time, and I don't think I've ever had a "bad" skipper. Our most favorite of all time was a cast member from Hong Kong who was being trained for Hong Kong Disneyland. She was a total hoot. So far she's the only skipper we've ever had that started singing, "it's a small world" as we entered the Cambodian temple. Nice touch. It's the skippers that keep me coming back and it's why this attraction is on my list.

One of the things that Disney does best is add little nooks and crannies into their lands and attractions. These secret spots aren't necessary, but without them things would certainly be less special and less magical. In my last Top 5 covering Main Street U.S.A., it was Center Street, a small side street that doesn't serve any purpose other than to make the land more immersive. Adventureland is full of great little spots. My favorite is back in the Caribbean Plaza, across from Pirates of the Caribbean and adjacent to the Tortuga Tavern. 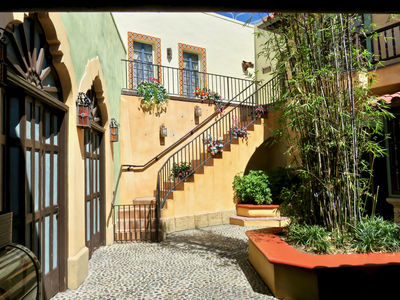 It's a small courtyard with a staircase that appears to lead up to apartments above. It's a peaceful, hidden little spot that removes you from the hustle and bustle of the plaza and really makes you feel like you're sitting in an actual Caribbean village. That's the Disney difference at work. Much thanks to Alan for making sure I had this photo for today's Top 5.

1 – Pirates of the Caribbean

Pirates of the Caribbean is one of my all-time favorite attractions in Walt Disney World. It was my favorite before I saw The Curse of the Black Pearl and in my opinion, the film franchise's mega success has only made this corner of the Magic Kingdom more magical. The awesome details that the Imagineers put into this classic are to thank for that. The queue starts it all off with all its little secret spots. The song stays with you long after you leave. The amazing animatronics are some of Disney's best and most beloved. 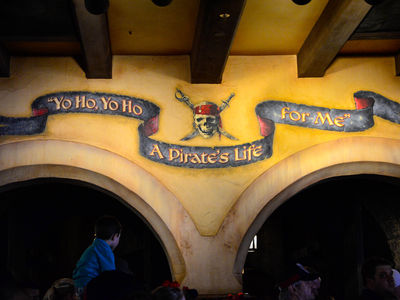 This phrase is posted at the entrance to Pirates of the Caribbean. Photograph by Bonnie Fink.

Once again, like all of the Adventureland attractions, it's not a thrill ride, but that doesn't mean it's not a Disney classic. For many people, Pirates is the reason they venture into Adventureland in the first place. I'm there for everything, but a big part of me is there for Pirates. I can't wait for the next film, and I also can't wait for the next time I board one of those boats, hear the iconic words, "Dead men tell no tales," and then plunge down into the Caribbean. Pirates of the Caribbean just makes me happy.

That pretty much covers almost all of Adventureland. I've only left off The Magic Carpets of Aladdin and Walt Disney's Enchanted Tiki Room. The carpets are fun, but to be honest we haven't been on them in some time. I will admit on a hot summer day, I have enjoyed standing near the carpets and waiting to get hit by a blast of cool water from the spitting camel.

I like the Tiki Room birds. I respect their history as Walt's original animatronic attraction, and I absolutely enjoy the current incarnation as opposed to the one that was under new management. But if I miss out on seeing them on a trip, I'm ok. If I miss anything else on this list, I feel like it hasn't been a trip.

I have yet to dine at the Skipper Canteen, so I can't comment on what this dining spot has brought to the land, but a restaurant themed to the Jungle Cruise sounds like a perfect fit. Tortuga Tavern, back in Caribbean Plaza is one of my favorite places to sit and eat, but it's not always open, so another dining option is a welcome sight.

Adventureland is one of my favorite areas of any Disney park. I love the architecture. I love the lush tropical foliage and meandering pathways. I love shopping in Agrabah Bazaar. Walt Disney's intentions were to take you away to far off lands and he and his Imagineers accomplished just that. Take your time walking through Adventureland on your next visit and you'll begin to feel like an intrepid traveler or an explorer heading off on an adventure. That's just what Walt wanted and each time I'm there, I'm more than happy to oblige.

Next up in the series as we head clockwise around the Magic Kingdom, we'll head to the wild, Wild West in Frontierland. Until then, I'd love to hear what you have to say. Click on the link below and let me hear what you love about Adventureland, and I'll see you next time with another Disney Top 5.