On our most recent trip to Walt Disney World, we enjoyed another unique WDW experience that I had been interested in trying for a while, Ferrytale Fireworks: A Sparkling Dessert Cruise. When we went, Wishes was still the nightly fireworks display at Disney's Magic Kingdom, so the cruise was called "Ferrytale Wishes: A Fireworks Dessert Cruise." Ferrytale Fireworks is a night time cruise around the Seven Seas Lagoon (the man-made waterway that connects Disney's Grand Floridian Resort & Spa, Disney's Polynesian Village Resort, Disney's Contemporary Resort, and Magic Kingdom Park), that runs several evenings a week (for May and June, the WDW online booking tool is showing Sundays and Mondays). The cruise takes about an hour, makes the entire circuit of the Seven Seas Lagoon resorts, and idles in a position in front of Magic Kingdom in a way that provides a spectacular view of the nightly fireworks display. 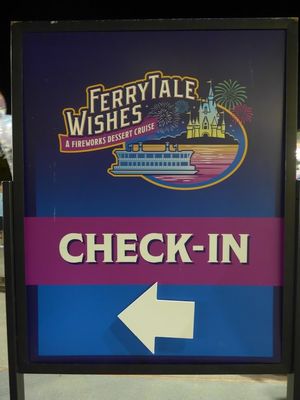 A placard points the way to the Ferrytale Fireworks Cruise at Disney's Transportation and Ticket Center. Photo by Donna Fesel.

Ferrytale Fireworks departs from Disney's Transportation and Ticket Center (TTC) at 8 p.m. You can take any transportation that you normally would to the TTC to begin your experience (your own car, the monorail, or you can even walk from the Polynesian). It's requested that you arrive at least fifteen (15) minutes prior to the departure time to check in. After you arrive at the TTC, head toward the ferry boarding area and follow the placard directing you to the check-in area for Ferrytale Fireworks.

On the evening we attended, we left plenty of time to navigate the TTC parking (which we don't usually use), and traverse to the check-in area. Upon arrival at the check-in area, we were escorted into a waiting area where a slew of other excited guests waited. We were provided with light up glow necklaces and a re-usable plastic flute with a sparkling beverage (sparkling wine for us, sparkling cider for our son), that also lit up. We were also provided with a fold-out guide to the cruise (a cheat sheet for all the snacks, a fun activity described for kids, and some interesting facts about the boat we were about to board, the General Joe Potter). Attached to the guide is a commemorative pin, only available to those who take the cruise.

After boarding, as we floated, we enjoyed a narrative from the cast members about the Lagoon, the resorts on the Lagoon and even the boat itself. Kids were free to participate in a search for "Hidden Mickeys" created just for the Cruise, using a special flashlight that is available on board. There was plenty of seating on board the boat; the cruise is limited to one hundred fifty (150) attendees per night, and if you have a scooter or electric convenience vehicle (ECV), you can also be accommodated. The boat, along with the Admiral Joe Fowler and the Richard F. Irvine, ferry park guests to and from the Magic Kingdom during the day. The General Joe Potter is a two-floor wonder, which has been decked out with a small restroom, installed specifically for events like this one. 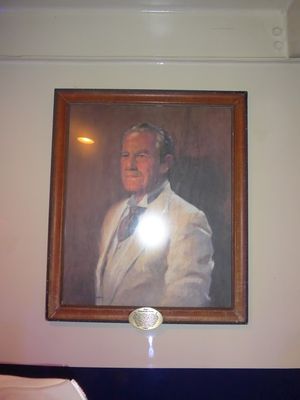 A portrait of the Cruise's namesake, General Joe Potter on board the boat for the Ferrytale Fireworks Cruise. Photo by Donna Fesel.

The boat has lots of open space, enormous open panels up top, and enormous viewing windows downstairs. It glided along calmly in the lagoon waters. The boat is named after General Joe Potter (William E. "Joe" Potter), a Disney legend who was known as "Mr. Disney" to the Orlando construction of the WDW Resort. He developed the revolutionary canals and underground utilizes that made WDW possible. He was also instrumental in his role as a bridge between WDW and community leaders, keeping them informed on WDW at every turn, which was how he earned his beloved nickname. 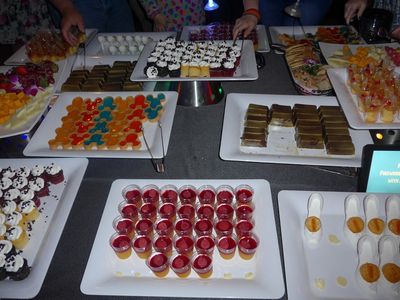 The treat display on board the Ferrytale Fireworks Cruise as the boat circled Seven Seas Lagoon. Photo by Donna Fesel.

Once on board, sweet treats were available at a large station that was themed to the Magic Kingdom and the resorts on the Seven Seas Lagoon. "The Grand" is a key lime tart with meringue, other desserts include "Main Street" Mickey tarts, Polynesian deconstructed upside down cake, a Contemporary flourless chocolate cake and an absolutely stunning Cinderella's slipper made out of sugar. Some no sugar added and no gluten, soy, eggs, peanuts or dairy added treats are also available. Fruit and assorted ice cream novelties (yay Mickey ice cream pops!) were available as well. Savory items included cheese and crackers. Available beverages included wine, beer, and "Ferrytale" punch (which you could spike with vodka), coffee, tea, and soft drinks. 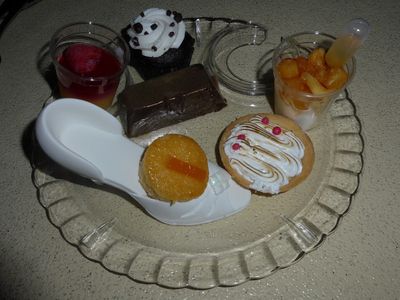 My selections on the Ferrytale Fireworks Cruise. Photo by Donna Fesel. 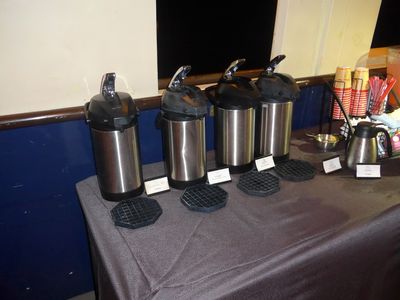 The coffee station on the Ferrytale Fireworks Cruise. Photo by Donna Fesel. 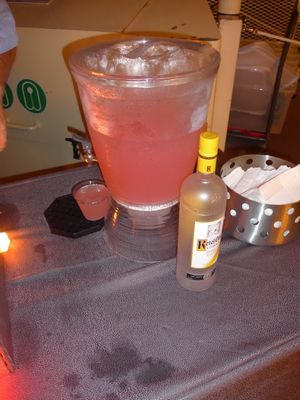 After some really interesting narration, the boat paused to watch the Electrical Water Pageant pass. This delightful music and light spectacle has been in operation since WDW's 1971 opening. If you've ever stayed at a Bay Lake or Seven Seas Lagoon resort, you will be very familiar with this WDW favorite that passes by nightly to the delight of guests. 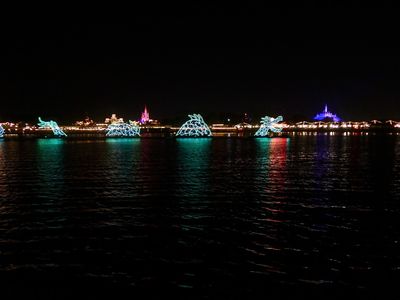 The Electrical Water Pageant as seen on the Ferrytale Fireworks Cruise. Photo by Donna Fesel.

A short time later, the boat idled in front of Magic Kingdom for the main event, the Wishes fireworks. The lights on the boat were dimmed, and the Wishes music was piped in. Guests took a space for viewing. There was plenty of room for all the Ferrytale Wishes guests to see clearly with no jostling. We selected a downstairs window where our family of three fit perfectly. Being able to watch Wishes in such a serene way was wonderful. After the Cruise ended, as we disembarked, Mickey balloons were available to take home for guests. 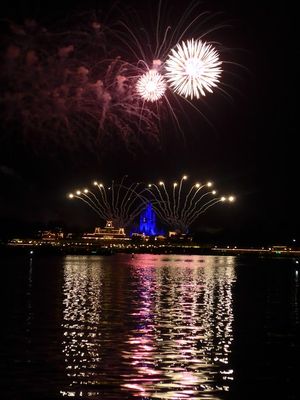 Wishes seen from the window of the Ferrytale Fireworks Cruise. Photo by Donna Fesel.

We had a blast, and the cruises do seem to be popular, but I doubt we'll go again in the foreseeable future. The food and fireworks viewing was great, but I didn't love paying the same price (see below) for my 12 year-old son as an adult who will consume cocktails. It feels like some more tiered seating, or perhaps a cash bar with a lower adult price might make sense.