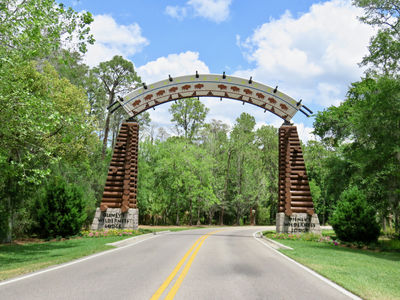 On April 19, I attended a media preview of Copper Creek that included a hard-hat tour of the ongoing construction, which involves conversion of approximately 400 former hotel guest rooms in the south tower of the Lodge into 184 DVC villas, as well as the addition of 26 waterfront cabins and additional resort amenities. Notwithstanding the need for hard hats, safety glasses, and reflective vests to tour the project, Ken Potrock, DVC Senior Vice President & General Manager, assured us that the project is on track to open as scheduled. 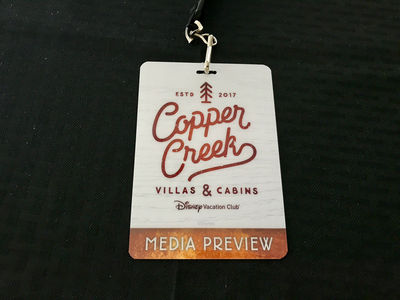 On April 19, along with other invited members of the media, I took a "hard hat tour" of the construction of Copper Creek. Photo by Alan S. Dalinka. 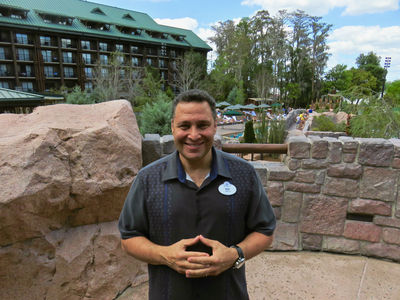 Ken Potrock, DVC Senior Vice President & General Manager, stands at the resort overlook area between the Lodge tower, which continues to operate as a hotel (shown) and the tower that is being converted into 184 new DVC villa units of Copper Creek. Photo by Alan S. Dalinka.

Copper Creek continues the storytelling of Disney's Wilderness Lodge, is inspired by the "legendary mining and railroad history of the Pacific Northwest," and Walt Disney's love of railroads. Where the story of the original structures at Wilderness Lodge draw their story from the 1800s, the new Copper Creek Villas & Cabins are tied to a slightly later period, when the railroad, mining, and quarry managers and foremen brought their families out west and built homes (like the cabins) along the lakes with some of the materials and objects found in the area. In the terms of some of the TV home improvement shows, the story is that the units employ "up-cycling" of materials originally intended for some other purpose.

The interiors of the new villas and cabins are modern in design, with lighter colors and lots of lighting. Like DVC properties that have been refurbished in recent years, the units include numerous easily accessible electrical outlets and even USB ports for charging modern electronics. The grand villas and cabins include in-the-mirror televisions.

Artwork in the rooms (like photographs from Vancouver), plus exposed steel beams and lots of wood are all nods to the story. The cabins each also have floor-to-ceiling windows, an in-and-out fireplace that can be enjoyed indoors or on the screened-in patio, stonework, and high ceilings with wood rafters in the living rooms. All of the units have lots of hidden surprise details and even some hidden Mickeys. 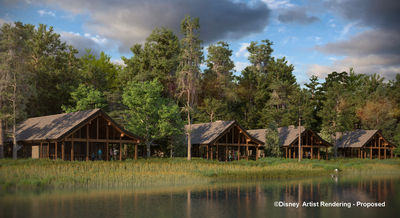 Twenty-six cabins are under construction along the shore of Bay Lake and around the bend to the northwest of the Wilderness Lodge boat dock. Rendering © Disney. 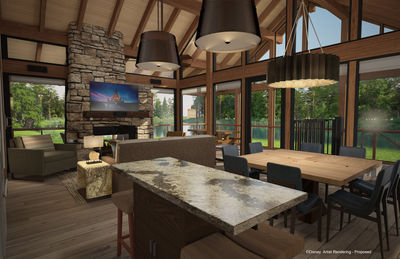 Though only an artist rendering, this image fairly closely captures the look of the cabin I toured. Some of the finishes shown are also representative of some found in the the new villas. Rendering © Disney.

The villas and cabins also have imitation wood flooring that should be able to withstand the heavy traffic of vacationers that will use these units. As DVC members and other timeshare owners know, the regular cleaning schedule for DVC accommodations is less often than a typical hotel room. In my experience, carpeting in DVC rooms often appears more worn than in other accommodations, so the heavy vinyl floor materials should prove to help keep units looking fresher longer.

While the Boulder Ridge Villas do not have as many different types of accommodations, according to the point charts now available to members on DisneyVacationClub.com, points per night for same-category rooms will be the same whether staying in the new Copper Creek Villas or Boulder Ridge Villas. Having said that, Ken Potrock explained that DVC assured that members that bought at Boulder Ridge will keep their 11-month reservation priority for the Boulder Ridge units, while members that buy at Copper Creek have priority for only those units. For all DVC members (including Boulder Ridge) who do not own points at Copper Creek as a "home resort," the regular seven-month booking window applies. For those not familiar with DVC and its points-based-reservations, take a look at the final section below for a very brief summary or visit DisneyVacationClub.com.

Along with the Copper Creek Villas & Cabins, the construction project at Disney's Wilderness Lodge brings with it a number of other enhancements for all guests. When the construction project began, the resort's Hidden Springs pool, resort beach, and playground facilities were all closed. The Hidden Springs pool is being replaced with a significantly larger pool with a zero-entry feature, more deck space, and a lot of decorative rockwork all around that isreminiscent of the sort of natural stone quarry that may be found in the Pacific Northwest. 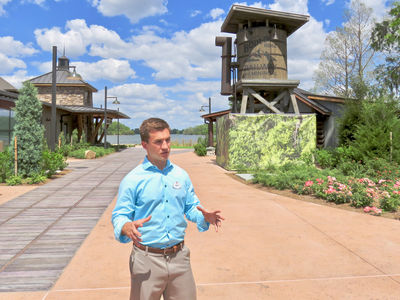 Mitch Miorelli, Lead Project Manager for Walt Disney Imagineering, discusses the inspiration behind some of the changes to Disney's Wilderness Lodge facilities with the building of Copper Creek. Photo by Alan S. Dalinka.

The recently opened Geyser Point Bar & Grill has been built in approximately the area that used to be where the resort beach was located. As we showed in the Views around the World section of our Walt Disney World Resort Update a few weeks ago, the open-air facility features a full bar as well as both table service and counter service food options. It also features a large outdoor patio overlooking Bay Lake and provides excellent viewing of the nighttime Electrical Water Pageant. 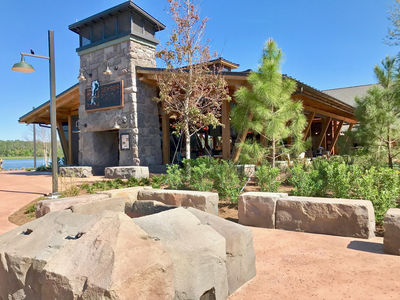 Geyser Point is located along the shore of Bay Lake. File photo by Alan S. Dalinka. 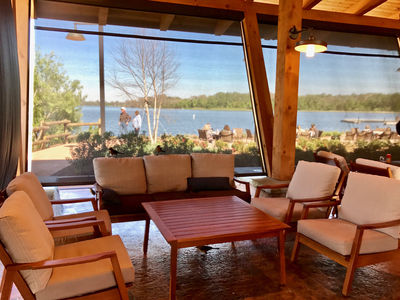 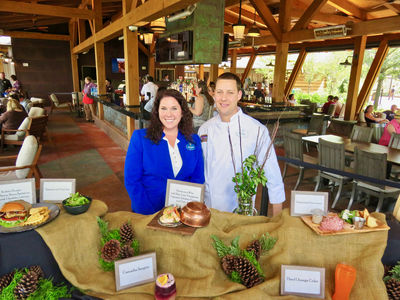 Geyser Point culinary team Stephanie Dold and Chef Michael Gonsalves show off some of the food and beverages available at this new location that is open to all guests visiting Wilderness Lodge. Photo by Alan S. Dalinka. 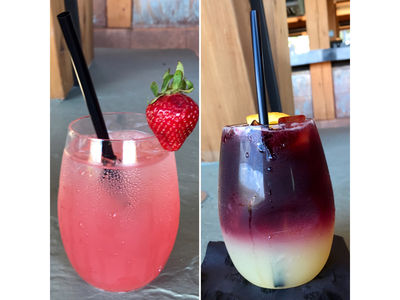 Next to Geyser Point to the south along Bay Lake is Reunion Station, the DVC Community Hall for DVC members. Nearby is the refurbished leisure boat dock with its support desk just beyond. Back in the main Lodge building, Roaring Fork is also expected to reopen on July 17, with more shaded outdoor seating, a broader menu, and a selection of groceries (which are particularly useful to guests staying in DVC units with kitchens). 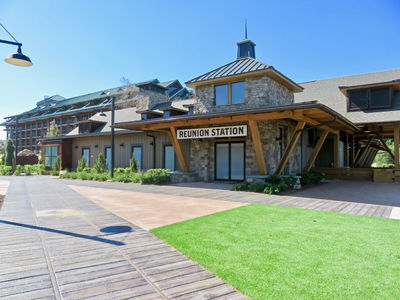 Reunion Station is located on the shore of Bay Lake. Behind it is the tower of the main Lodge that is being transformed into the new Copper Creek Villas. File photo by Alan S. Dalinka.

With the opening of general sales for Disney Vacation Club's newest resort, Copper Creek Villas & Cabins at Disney's Wilderness Lodge last week, Disney posted a video highlighting the expected features of the new resort. [Disney's promotion material is a timeshare solicitation and is not an offer in any jurisdiction where the timeshare is not registered.] Video © Disney.

Disney Vacation Club is Disney's version of timeshare ownership resorts. Established in October 1991 with what is now known as Disney's Old Key West Resort, it uses a flexible, vacation point-based model rather than the traditional fixed-week timeshare model. Disney Vacation Club members purchase real estate interests in the resorts; the real estate interest is represented by "points" which all members to choose from among a variety of vacation destinations, including a stay at their "Home Resort" (the one(s) at which they bought their points) or any other DVC Resort, or at thousands of other resort destinations around the world. Vacations at a DVC Resorts (and some of its trading partners) can last from one night to several weeks. When DVC points are purchased directly from Disney, members can also use their memberships to take trips on one of the Disney Cruise Line ships or guided vacations with Adventures by Disney.

Disney is currently selling points at Copper Creek for $175 per point. Currently, you can tour models of the Copper Creek Villas & Cabins at DVC's center at Disney's Saratoga Springs Resort. After the July 17 opening of Copper Creek, DVC expects to have models and tours on site.

While I was invited to the media preview and I have been a Disney Vacation Member since 2000, and I am a Disney shareholder, neither MousePlanet nor I have any official connection to DVC or Disney. We make no recommendation regarding or offer of sale to you. Purchasing a timeshare is a decision that carries with it substantial initial and on-going personal financial obligations, including the initial purchase, membership dues and taxes. Please consider all of the disclosures carefully, seek appropriate advice, and review any information that your local jurisdiction may provide consumers regarding timeshares.