Anyone who's seen our photo tours of Disney resorts knows that we're proponents of staying on property when visiting Walt Disney World. Our reasoning is simply that it affords you the opportunity to get the most out of your vacation. You stay in "character" the entire trip while putting aside the cold hard reality of the outside world for a short time. You stay comfortably inside the Disney magic.

It's also our opinion that with Disney's value hotels, your stay on property isn't necessarily more expensive. Considering the value that's added to your stay, like free transportation to and from the airport and all around Disney property during your stay including to and from the parks (avoiding the parking fee), staying on property can turn out to be a good value. This is especially true during slow times of the year when the value resorts start running their deals.

This month's photo tour is of Disney's Pop Century Resort. This hotel was quite a bit of fun for us because it took us down memory lane through the decades of the last half of the twentieth century while we walked its grounds. For the very young, it might be a bit foreign seeing a giant floppy disk or a phone with a cord and dial. But for many of us, it jogs the memory of a time in our lives.

If you spend a little time in the lobby of Disney's Pop Century Resort, you could come away with the feeling that you've just been to a museum of 20th century American pop culture. Photo by Donald Fink.

Rooms are typical of a value hotel on Disney Property. Photo by Donald Fink.

We found the rooms at Disney's Pop Century Resort to be quite comfortable. Unlike some of the more expensive hotels on property, the two beds were doubles instead of queens, and this partly makes up for the smaller square footage of a value hotel compared to the slightly more spacious moderates. Value hotels on Disney property typically have about 260 square feet, while the moderates, except for Fort Wilderness Campground Cabins, have 314. The cabins at Fort Wilderness Campground have 504. 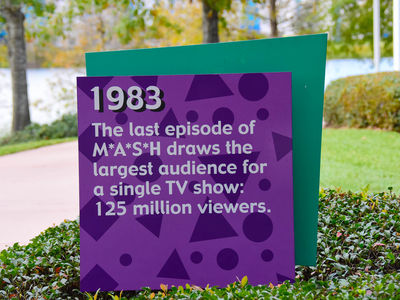 Along the edge of Hourglass Lake is a walkway called Memory Lane. You can find signs with bits of last century's trivia along your way. Photo by Donald Fink.

Along Memory Lane there's a bridge that crosses Hourglass Lake called Generation Gap Bridge and connects with Disney's Art of Animation Resort. We thought that the bridge had an odd name considering that it goes from Disney's Pop Century Resort to Disney's Art of Animation Resort. After all, what could the name "Generation Gap Bridge" have to do with Animation? A little digging quickly told us the answer:

When Disney's Pop Century Resort was first constructed, it was supposed to have two areas. One area was to be called The Classic Years and be themed after the years 1950 through 1999, and the other side was to be called The Legendary Years, covering 1900 through 1949. All the major buildings were constructed, but when the Classic Years side opened in 2003 as Disney's Pop Century Resort, The Legendary Years side sat vacant and wasn't finished.

In 2010, Disney announced plans to complete the Legendary Years side of the resort, but to re-theme it after several of Disney's animated movies. The movies are, The Little Mermaid, Finding Nemo, The Lion King, and Cars. Its new name when it opened in 2012 was Disney's Art of Animation Resort. 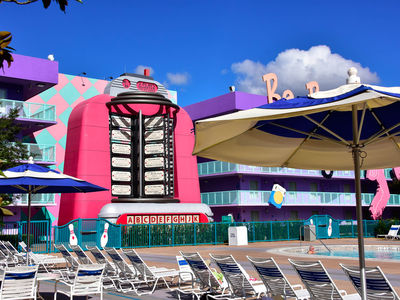 The Jukebox controller is located at the Bowling Pool, which is at the 1950s buildings. Don't go looking for any of the songs listed in this Jukebox control in your collection of old 45s because they're not real titles. Photo by Bonnie Fink. 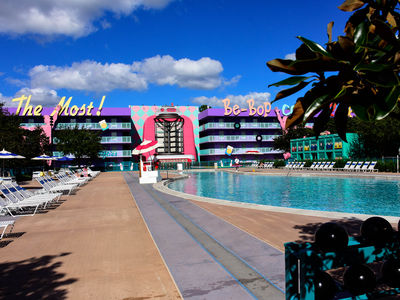 The Bowling Pool is located in the 1950s area. It's in the shape of a bowling pin. The pool deck is decorated like a bowling alley complete with the racks of balls and lane arrows. Photo by Donald Fink. 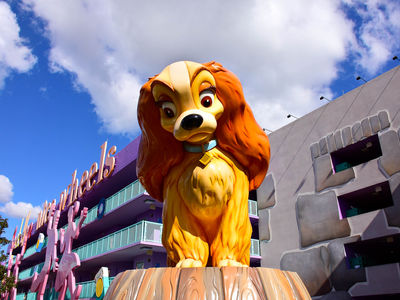 Lady, from the 1955 Disney animated movie, "Lady and the Tramp," stands in the 1950s area near the Bowling Pool, at Building 1. Across the courtyard from here and not shown in this image is her one true love, Tramp. Photo by Donald Fink. 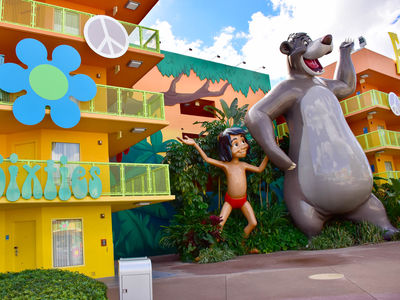 Mowgli (the human on the left left) and Baloo from the original Disney film, "The Jungle Book," are standing at Building 5 in the 1960s area. This animated movie came out in 1967 with a second movie released in 2016. It was Disney's 19th animated film and the first one in which the voices were cast using well known celebrities. Photo by Bonnie Fink. 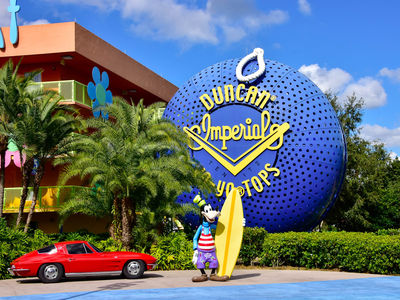 You can get your "surfin selfie" with Goofy and his 64 Stingray. They're located between the 1960s and 1970s buildings along the main walkway to the Classic Hall. Photo by Bonnie Fink. 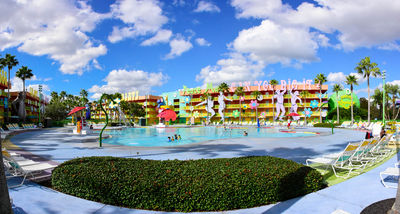 The main swimming pool at Disney's Pop Century Resort is called the Hippy Dippy Pool. It's located between the 1960s buildings (where else would it be?) and behind the Classic Hall. The odd shape of this pool reminds us of the oil and water mixtures used on overhead projectors at 1960s rock concerts to provide a "light show". Photo by Donald Fink. 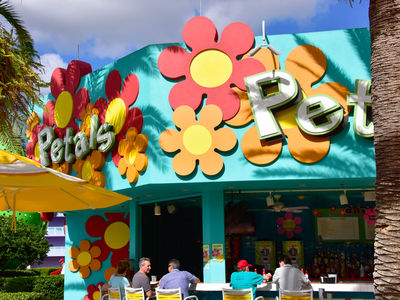 Petals Pool Bar is located at the Hippy Dippy Pool, behind the Classic Hall. Photo by Bonnie Fink. 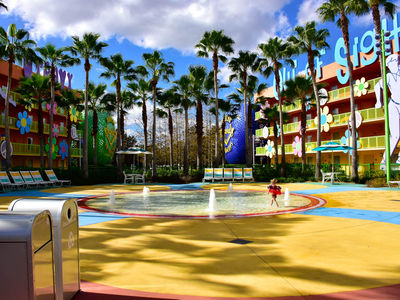 A small wading pool is located just behind the Hippy Dippy Pool, which is in the 1960s section behind the Classic Hall. Its colorful decor is bound to be a treat for the very little ones. Photo by Bonnie Fink.

This colorful walkway ambles its way between the 1970s buildings. There are no internal bus services at this hotel, but the walkways are a pleasant experience. Photo by Donald Fink. 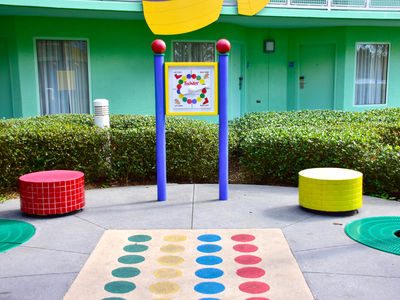 This Twister game is located between the 1970s buildings near the 1970s Playground. The original name for this game when pitched to Milton Bradley was Pretzel. They quickly discovered that the name was not available, so they went with their second choice. Photo by Bonnie Fink. 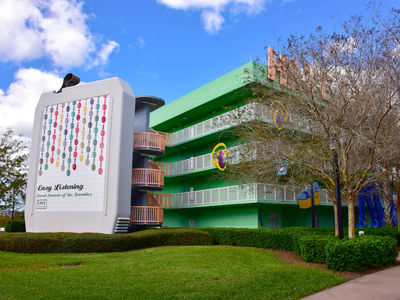 Anyone remember what this is? It's an 8-track tape. We thought they were great when they first came out, but thinking back to all the tape jams and bad audio, they were more of a bad dream; sort of like leisure suits. There are two of them near the 1970s buildings. Photo by Bonnie Fink. 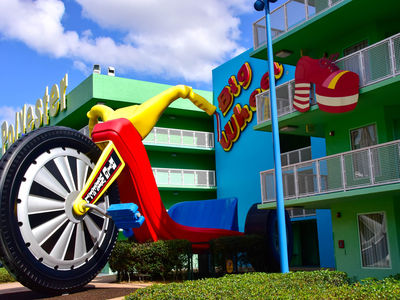 The Big Wheel was initially marketed in 1969, but the bulk of its popularity was through the 1970s. This toy was inducted to the Toy Hall of Fame in 2009. Who knew there was a Toy Hall of Fame? Photo by Bonnie Fink. 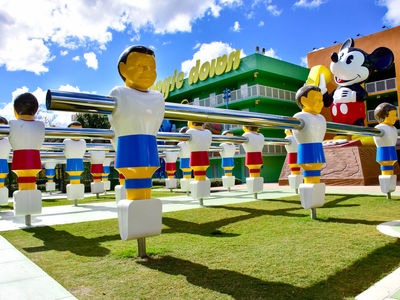 Between the two 1970s buildings is a giant Foosball game. We would have thought that a lot better use could have been made from this space, but we've never been big fans of the game. A lot of people are fans—even today—so we could be in the minority here. But just to be clear, this game is about Soccer, not Football. Photo by Bonnie Fink. 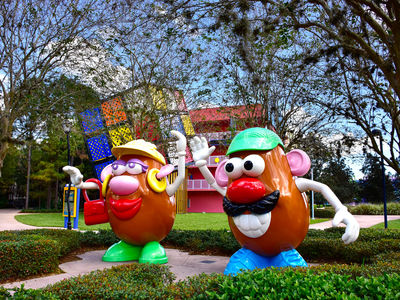 Hasbro's Mr. and Mrs. Potato Head are available for pictures. They're located near the 1980s buildings along the Memory Lane Walkway. Mr. Potato Head was developed in 1949 and manufactured by Hasbro as early as 1952. It is allegedly the first toy advertised on American TV. Photo by Bonnie Fink. 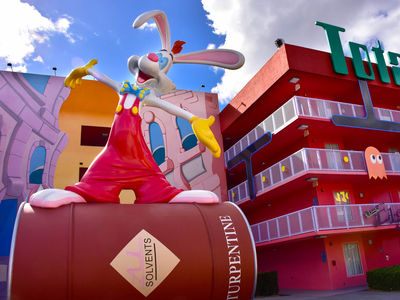 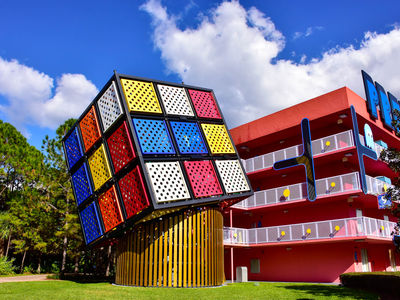 There are six Rubik's Cubes protecting the stairwells of the two 1980s buildings at Disney's Pop Century Resort. We think of the Rubik's Cube as an American phenomena, but Hungarian sculptor and architect Erno Rubik is credited with its invention. The fastest time for solving a Rubik's Cube we could find was by Australian Feliks Zemdegs on May 10, 2016. His time was 4.73 seconds. Photo by Bonnie Fink. 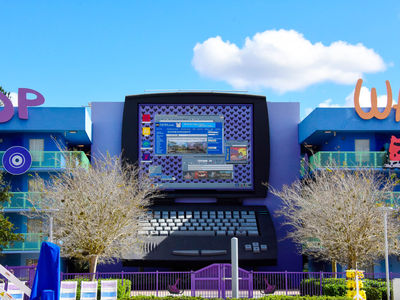 The laptop located on the 1990s building shows an ABC News page from the day Disney's Animal Kingdom opened, which happened to be April 22, 1998. This appears to be Mickey's laptop because the mail client open below is from the very same Mouse. You can also see desktop shortcuts to Disney's MGM Studios, Disney's Animal Kingdom, Magic Kingdom, and Epcot. Surprisingly, the URL listed on the ABC story no longer works. Photo by Donald Fink.

The Computer Pool is nestled between the 1980s buildings, in front of the 1990s building. You can see an early laptop on the facade of the 1990s building in the background. For those of you who may not know, that's a floppy disk near the upper left side of the pool. We would have preferred to see a 5 1/4-inch hard sectored Verbatim floppy on the right. Its massive size compared to the 3 1/2-inch disk on the left would have easily hidden the pool's equipment building. Photo by Donald Fink. 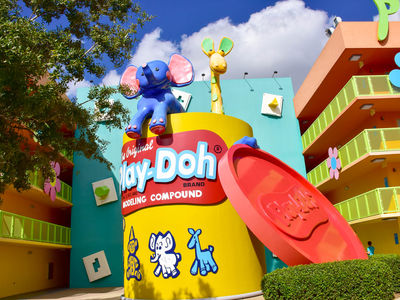 Anyone remember Play-Doh? Most of us can't claim it was before or after our time since it's been around since the 1930s. Don's favorite was Silly Putty, just for the record. Photo by Bonnie Fink. 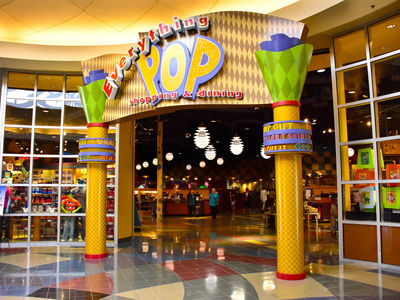 Located in the Classic Hall is Everything Pop. This entrance goes through a well-equipped gift shop into the quick service dining facility. Photo by Bonnie Fink. 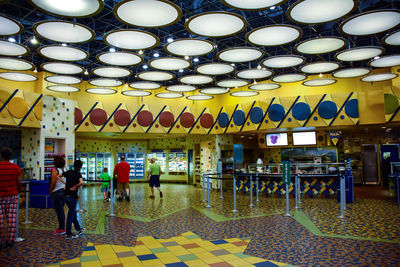 Most food courts on Disney property have a unique name. The food court at Disney's Pop Century Resort seems to be part of Everything POP Shopping and Dining. Whether the eatery has a name that's different from the shopping area probably isn't important. What is important though is that the food is surprisingly good. Photo by Donald Fink.

During our brief stay at Disney's Pop Century Resort, we sampled dinner at the food court. Our choices were Pot Roast and Carved Rotisserie Turkey Breast. And while we would certainly prefer to have our Thanksgiving meal at a little higher-end establishment—like Liberty Tree Tavern—we couldn't complain about the quality or quantity of the food here. Here's a link to their menu.

In our last photo tour, we mentioned that some of the advantages of staying on property include:

One comment from a reader of an earlier article pointed out that we forgot to mention one other important benefit of staying on property, and that's if you're staying at a Disney resort, you don't have to pay for parking at the four parks if you choose to drive. It turns out that many people prefer driving their own vehicles rather than using Disney transportation. When staying at a Disney resort, you can park at the parks without paying.

All of Disney's resort hotels are fabulously decorated. Staying here can significantly enhance your stay, and for many, that's important. Considering that the overall cost of putting together a Disney vacation is far from trivial for most people, it pays to get the most out of your visit.

If you're thinking about a visit to Walt Disney World and plan to stay at Disney's Pop Century Resort, we would suggest that you plan ahead by watching the following movies:

This is especially true if you have little ones with you who might not understand the significance of these characters. As for explaining the floppy disk at the Computer Pool, or the shape of the Hippy Dippy Pool, you're on your own.