Guardians of the Galaxy-Mission: Breakout!

On May 27 guests of Disney California Adventure get to come face to face with the likes of Rocket (who looks strangely like a raccoon), Groot (a plant creature), and Star-Lord (the fearless leader of the Guardians of the Galaxy) in the new attraction Guardians of the Galaxy–Mission: Breakout! If you cannot bear to read about the replacement of Tower of Tower or do not want any spoilers, consider yourself warned.

The old show biz adage of "faster and funnier" certainly holds true in the redux of this attraction. Terrans can only enjoy this "irreverent" attraction in California but it is very comforting to know that the Tower of Terror is still handy for enjoying back east in Florida. Oh yes, "Terrans" are what we Earthlings are called in the Galaxy and you will be referred to that throughout the attraction.

Keep your eyes peeled for a cameo from Marvel comic creator, Stan Lee. 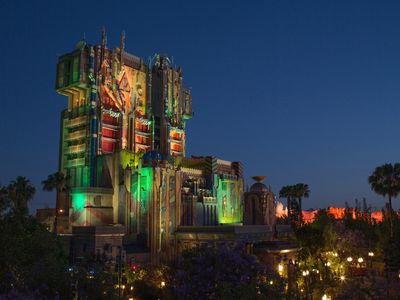 The Collector's Fortress is colorfully lit at night. Photo ©Disney.

The theming is the most interactive and energetic ever on an attraction. When you are welcomed into the lobby of The Collector's mighty fortress for a VIP tour, you are confronted by an enormous golden statue of The Collector himself, aka Tanaleer Tivan. Right away you know that your host thinks very highly of himself. Upon entering the lobby all of you Marvel fans will immediately geek out. Some might rather stay here all day and look at the collection with all sorts of items trapped in display cases all around you and even above you.

Some of the highlights are Cosmo the test dog from the Russian (Terran region) space program, a damaged Ultron Sentry from the Battle of Sokovia (also a Terran region), and a Royal Guard's uniform from Asgard (home of the Norse gods such as Thor and Loki). Now for those of you who have just glazed over at the mention of the last three items, not to worry. If you love theme park attractions (especially at the Disneyland Resort) but are not a fan of Marvel/Superheroes you will still enjoy the lobby and completely understand the storytelling.

"It was very important to us that every guest could walk in the door and enjoy the story of the attraction, and the awesome soundtrack, even if they are not familiar with these characters," says Estefania Harbuck, Creative Producer, Walt Disney Imagineering.

In the lobby you will also meet the newest and most prized acquisition in the collection: The Guardians of the Galaxy. They appear on an enormous video screen and we see them trapped in dangling glass cells over an abyss. The dialogue is funny and clear. Disney/Marvel did a fantastic job writing a script that will please fans and neophytes alike.

They even had some help from James Gunn the director of the films who said, "It's been exciting and a lot of fun to help direct and shape the experience so that it has all the heart and fun and humor of the Guardians movies."

One thing to note, the queue remains the same as it was for Tower of Terror. If you hold a Fastpass it will be difficult to watch the whole pre-show as you will be ushered in very quickly. Of course the volume is turned up quite high so while you are waiting to enter The Collector's office you can still hear the dialogue. You also will not be able to see a lot of the artifacts in this scenario. Getting in the queue first thing in the morning and waiting a half an hour or less would be a great way to see this amazing room and the full pre-show. It's fair to predict an hour plus wait for stand-by riding will continue for years to come.

Keep your eyes peeled for a maquette on a certain desk of a certain canine from a certain Mansion from a neighboring theme park.

The next phase of the attraction takes you into The Collector's office. Before you enter you are asked to hold up your hands so you can be scanned into the office. Again the guest becomes part of the story and it only gets more immersive. Once inside, you will see many smaller items in the collection; it's too much to see on one trip but keep an eye peeled for something from Doctor Strange and a treasure taken from the Guardian Star-Lord himself.

During yet another video starring The Collector, Rocket interrupts as he has escaped his prison and now asks for our help on his mission. He needs our hand scans to hijack a gantry lift to ride to the top of the fortress and disable the generator thus freeing his pals. This is where we see some amazing Imagineering in a very sophisticated animatronic of Rocket. For best viewing you want to stand near the wall that faces the entrance to the office. Rocket appears on the opposite wall that has the exit door. If you are directly under Rocket there are some sight line issues but rest assured you can indeed see him from any vantage point. Now the cast members that of course "work" for The Collector are aware of Rocket's plan. Their spiels and attitudes seem to still change a bit and some of them are spot on and really immerse you in the attraction. Some of them need a little work still but the talent is there.

Keep your eyes peeled while you are waiting for your gantry lift. If you are upstairs, look down. If you are downstairs, look up. You may see some collectibles from a certain theme park back on Terra.

Once you use your hands to scan for entrance into the gantry lift the real fun begins. Again the cast members seem to have freedom with dialogue and have different options to use. Some are on Rocket's side and some seem scared to lose their job at the Collector's Fortress. Once you have securely fastened your safety belt (left to right) you will experience one of six random escape scenarios with a corresponding "awesome mix" of songs, inspired by the films' soundtracks. For the preview Pat Benatar's 1980 hit "Hit Me With Your Best Shot" was the experience. For a list of the six different songs available, see the article Breaking Into Guardians of the Galaxy–Mission: Breakout! from April 27, 2017. The ride system is now enhanced with more high-speed theming than ever before and each song provides a great back beat to a different up-and-down profile and story.

Keep your eyes peeled during "Hit Me With Your Best Shot" for a fantastic view of the Abilisk from the opening sequence of the new Guardians of the Galaxy Vol. 2 film this summer. If you don't see this creature in this segment then you have your eyes closed for most of the ride.

It seems that this ride is longer than the old Tower of Terror attraction, but with the quicker start and pounding music it feels much longer. The Imagineers say it is approximately the same amount of time as the former attraction. "Once guests take a seat and we close the doors, it blasts off like a rocket ship. It's zooming up and down, the music is rockin', the doors keep opening and all this stuff is loose—all kinds of chaos—until Rocket gets the power back on. You're in for some real, high-energy fun." says Joe Rohde, Creative Executive from Walt Disney Imagineering.

When you exit the attraction the story isn't over yet. Not only did the Guardians of the Galaxy escape, but the entire collection has been let loose; as you walk through the halls towards the gift shop you can hear the warning announcements and various creatures running amok. There is still the option to buy pictures of your gang screaming on the attraction.

This time the gift shop is also in on the storytelling. Since the collection has been released it appears that disgruntled employees who work for The Collector have decided that everything must go. These items include t-shirts (many with awesome 1970s style logos), mugs suitable for a hot beverage enjoyed at daybreak known to Terrans as "coffee", 1970s and 1980s electronic games such as Simon, and of course various dancing Groots in plush, potted, and plastic form. Unfortunately you cannot buy the Ultron Sentry (yet). I would think that with all the Terran Collectors out there we might see some high end items such as that for sale at some point.

Now for those of you that would love to experience all of this attraction, but motion sickness is an issue, remember there are exits (commonly referred to as "chicken exits'') right before you enter your gantry lift. If your entire party wants to get Fastpass tickets you might want to join them to experience the lobby, office, and gantry lift holding bay at least once. If the standby line is at two hours you may want to go Hero Up with the Summer of Heroes and have a dance off with Star-Lord, Gamora, and Groot; meet Spider-Man or Captain America; or keep your eyes peeled for Black Widow driving around in a black armored vehicle known as the Avengers Armored Transport.

Finally, make sure you take a gander at the Collector's Fortress at nighttime. The reviews on the new design of this ten-story edifice at Disney California Adventure are mixed, but in the dark with the lights pulsating and sparkling up and down the building, that's the stuff of pure Disney... Marvel... um... Disney/Marvel magic? May the Force Be... oh dear... have fun.