The Hollywood Brown Derby - Dining in the Golden Age of Hollywood

Few restaurants are as iconic as the Hollywood Brown Derby. Originally opened in 1926 in the shape of a large brown derby hat, its more famous 1929 incarnation inside the Spanish Mission façade familiar to Disney's Hollywood Studios guests, brought out the brightest stars in the Golden Age of Hollywood to dine. Licensing rights were agreed to in 1987 with the Walt Disney Company, and in 1990 three additional agreements were made for Paris, Tokyo, and Disney California Adventure park locations. 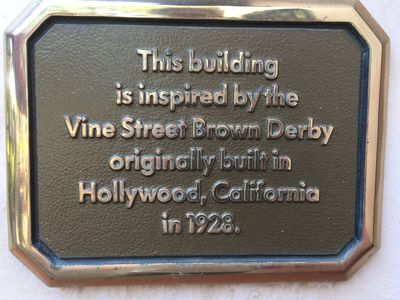 A plaque gives some details about the restaurant's origins. Photo by Roan Poulter.

Walking into the Hollywood Brown Derby, it is as I imagine the 1930s location to have looked. Caricatures line the walls, only a few of which I recognize, but with unique enough features to enhance the mystery of their identities. 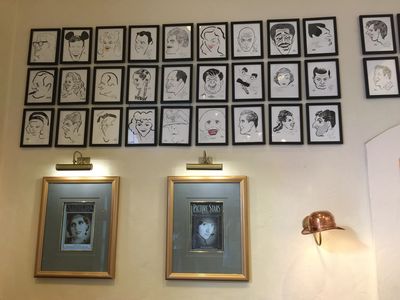 These caricatures are possibly more iconic than the building itself. Photo by Roan Poulter.

Dark mahogany finishes and buttery cream walls give the gravitas of age without seeming cliché or overdone. This is the premier restaurant of the park and the wait staff is more than up to the job, servers passing hither and thither in an almost choreographed dance of ordering, delivery, and cleanup. The architecture is poorly designed for noise, so on a busy day it can be difficult to have an intimate conversation in the dining area. 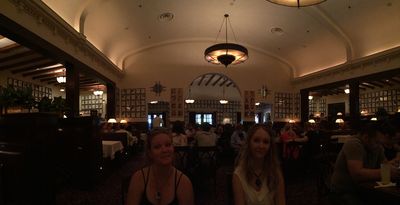 The dining area gives a large sense of space but can be very loud. Photo by Roan Poulter.

The menu consists of some Brown Derby Classics—the Cobb salad is rumored to have been invented by the Owner, Howard Cobb. More contemporary choices such as vegetarian pho and Faroe Island salmon give choices for diets not based in the 1930s

Here's what we had: 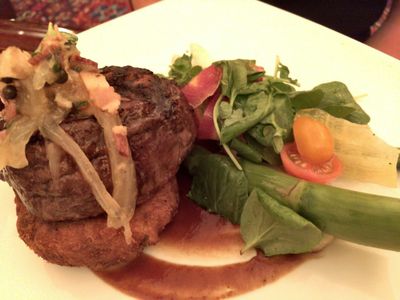 The charred filet of beef is rather small considering the price and quality. Photo by Roan Poulter.

Charred Filet of Beef: Mushroom, White Truffle Potatoes Croquette, Jumbo Green and White Asparagus, Toy Box Tomato, Rainbow Carrot, Watercress Salad, Bin 27 Port Wine Reduction. At nearly fifty dollars this is an entrée that would buy your family a meal at other establishments. As such, I thought the serving size to be underwhelming. While the beef was good, it wasn't incredible. Everything included balanced the beef in interesting, if generally bland ways, but the star of the show just didn't wow me. The beef was a tender cut, but was on the tough side and desperately in need of salt. I wanted to like this dish, but for the cost I highly recommend trying something else. 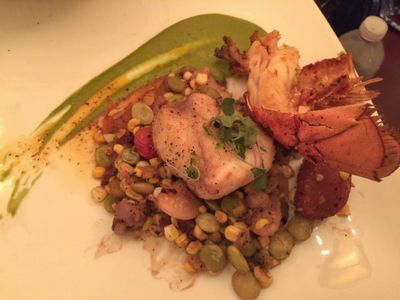 The grouper and lobster tail is served. Photo by Roan Poulter.

Pan Seared Black Grouper with Garlic-Herb Butter-crusted Cold Water Lobster Tail – What was a delicious lobster tail had unfortunately either been left out in the sun to dry or under the heat light until an equally inglorious situation arrived at our table. The delicate arms of the lobster filet were dried into jerky. What tender meat existed in the center was delicious, which made the inedible portions that much more frustrating. The grouper was tender if bland and lacking in accessory sides to make it pop. 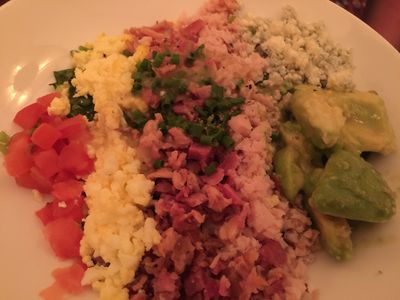 Far and away my favorite choice, the Cobb Salad never disappoints. Photo by Roan Poulter.

Our Famous Cobb Salad – Finely Chopped Greens, Turkey Breast, Bacon, Egg, Tomatoes, Crumbled Blue Cheese, Avocado, Chives, and Cobb Dressing. How finely chopping a salad can make it delicious is beyond my understanding, but remains true. This might be my favorite salad in the whole world. Mostly a textural homogeny containing all the necessary flavor components. Yet even in the hot wash of dressing and heavy proteins, the chopped lettuce gives fresh notes and keeps the salad from becoming a gut bomb. 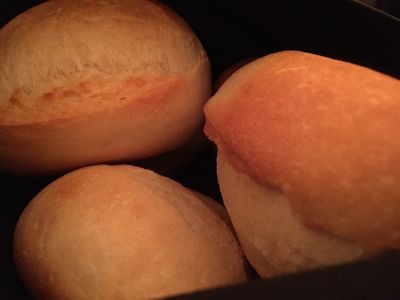 The rolls are excellent. Photo by Roan Poulter.

The rolls; how are they worthy of mention? Freshly baked, crusty outside and beautifully full of steam and happiness on the inside, they make sopping up the remnants of your entrée a true pleasure. 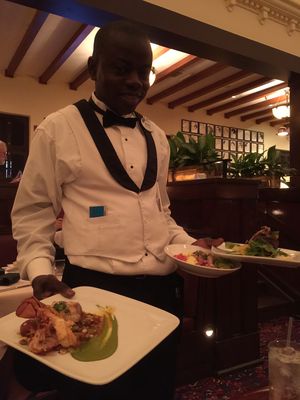 The service was very good. Photo by Roan Poulter.

Dad (42): 3.1 of 5The theming is amazing, but the food just did not justify the cost. Either an increase in portion or quality is badly needed. With the notable exceptions of the Cobb and rolls, both of which are excellent. Were I to try the Brown Derby again, that's what I would order.

Mom (42): 3.3 of 5 – The tastes seemed old fashioned, which isn't all bad in this context. The lobster was unacceptable.