Disneyland Paris today announced some changes to its version of the classic Pirates of the Caribbean attraction, which reopens July 24 following refurbishment. Tucked at the bottom of that Disney Parks Blog article was a cannonball of an additional announcement: changes are also coming to the Pirates attractions in Disneyland and Walt Disney World. 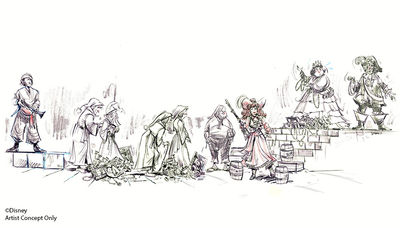 Concept art shows changes planned for the Disneyland Paris version of the Pirates of the Caribbean attraction. Photo © Disney.

Both attractions are closing for scheduled refurbishment in 2018, reopening with a re-imagined auction scene that features the famous redhead in a brand new role. No longer satisfied to be a wench for the taking, the redhead is joining the ranks of the pirate crew, and helping to conduct an "auction" of goods plundered from the local townspeople.

This change is certain to be met with criticism from die-hard fans who hate to see any changes made to the classic attractions, especially those touched by Walt Disney himself. Disney Legend Marty Sklar, who worked closely with Walt Disney during the earliest days of Disneyland, says the changes are in keeping with Walt's vision of the parks:

"To me, the Imagineers are simply reflecting what Walt started the day Disneyland opened—making changes that create exciting new experiences for our guests. I can't think of a single attraction that has not been enhanced and improved, some over and over again. Change is a 'tradition' at Disneyland that today's Imagineers practice—they learned it from their mentors, many of them Walt's original team of storytellers and designers—the Disney Legends.

"Pirates of the Caribbean has always represented great Disney Park storytelling; it has set the standard for the theme park industry for half a century! But it's a story you can continue to add fun to, with great characters in new 'performances.' That's what the Imagineers have done with this new auction scene—it's like a theatre show with a new act."

In fact, Pirates has been updated several times since first debuting at Disneyland in 1967, and each change has had its share of fans and detractors. Most notorious was the change made to the ride in 1997, in which a scene of pirates chasing women through the town was altered by placing trays of food in the women's hands, thus framing the conflict as one of gluttony rather than lust (the Walt Disney World version of the ride, which opened in 1973, had always featured food). 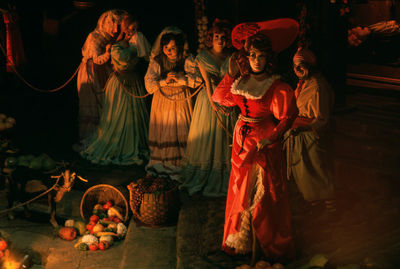 The current version of Pirates of the Caribbean places the redhead in a line of unwilling brides at the pirate auction. Photo © Disney.

The popularity of the theme park ride inspired Walt Disney Pictures to launch a wildly successful film franchise, beginning in 2003 with Pirates of the Caribbean: The Curse of the Black Pearl. Three years later, Disney brought the story full circle, adding characters from the film franchise to the attraction. Disneyland spokesperson Suzi Brown tells MousePlanet:

"From introducing characters from the film saga, to the technology and story enhancements, changes to our attractions are done in the spirit of moving forward what Walt Disney inspired. We believe the time is right to turn the page to a new story in this scene, consistent with the humorous, adventurous spirit of the attraction."

This brings us to 2018 and the latest change to the iconic ride. Concept art released by Disney shows the banner in the auction scene—which currently reads, "Take a Wench for a Bride"—being replaced with a new banner reading "Surrender Yer Loot." Wealthy townspeople are shown hauling their household treasures to the steps under the watchful eye of the pirates, including a gun-toting redhead.

The famous redhead takes a new role in the updated auction scene in the Pirates of the Caribbean attraction at Disneyland and Walt Disney World. Photo © Disney.

Kathy Mangum, vice president and executive producer with Walt Disney Imagineering, explains what Imagineers hoped to accomplish with this update.

"Our team thought long and hard about how to best update this scene. Given the redhead has long been a fan favorite, we wanted to keep her as a pivotal part of the story, so we made her a plundering pirate! We think this keeps to the original vision of the attraction as envisioned by Marc Davis, X Atencio and the other Disney legends who first brought this classic to life."

The Disneyland and Walt Disney World attractions will each close in 2018 for this refurbishment, and Disney has not given specific reopening dates.