Welcome back to Epcot. As I said in my last article in this series, there's just something completely different about Epcot isn't there? It was an instant thing for me upon my first visit to the second Walt Disney World theme park. My heart has a special place carved out in it for the Magic Kingdom for sure. Nowhere else can I have that incredible feeling that I've returned to my childhood days of reckless abandonment and starry-eyed wonder. But Epcot is a whole different feeling and one that I have grown to treasure immensely. Epcot has an air of otherworldliness about it that visitors obviously long for. The eleven nations represented in World Showcase allow us to soak in cultures from around the globe. Future World is where technology and reality meet affording us the opportunity to soar through the skies, plummet beneath the seas, learn to treasure the land, and blast off into outer space.

We started off our visit to Future World in the center of it all, Future World Central. This time we're hanging a right after exiting Spaceship Earth and venturing into Future World West. This is my favorite section of Future World both for the attractions and for the lay of the land, not to mention the food. The west side is broken up into three different areas, the sea, the land, and the imagination. The surrounding landscapes, gardens, and ponds create one of my favorite places to walk around in Walt Disney World. Let's see what I think are the Top 5 things to see in Future World West.

When you head to Epcot with little kids, you're guaranteed to spend some time with everyone's favorite purple dragon, Figment. We've been on Journey into Imagination with Figment more times than I can count. It's a tradition, I suppose. It's not thrilling. It's good simple fun. There are many who feel that it's time for Figment to go, or to be revamped, or even to be reverted to a previous incarnation complete with the return of the DreamFinder. 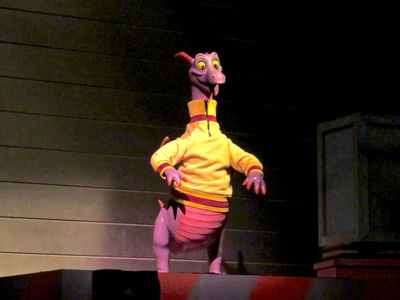 Seek out Figment, seen here in his natural habitat inside Journey into Imagination. Photo by Alan S. Dalinka.

Personally, Journey into Imagination is about two things: the unforgettable Sherman Brothers song that stays with you forever and Figment himself. I love Figment. I love him even more than I love the attraction itself. I miss the days when you could actually meet him next door. If someone who has the influence is reading this, please bring that costume out of storage. 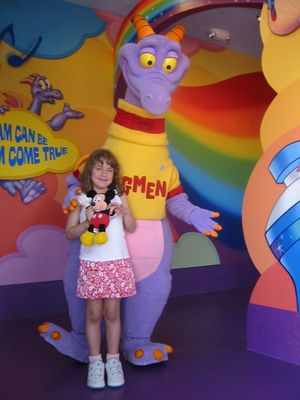 My daughter Samantha and Figment many moons ago. Photo by Chris Barry.

I love the fact that Figment is not from a film or television show, he's strictly from Epcot. Duffy the Bear is awfully cute and cuddly, but Figment is and should be the official "creature" of Epcot.

I've long been a fan of this food court in the Land pavilion. It's still, in my humble opinion, the best food court on Disney property. This is not the place for the chicken finger and burger crowd. If you're looking for more interesting and healthier options to have a counter service meal, then look no further than Sunshine Seasons. Where else can you get spicy fish tacos, oak-grilled salmon, Maryland style crab soup, and a vegan flatbread sandwich in a theme park?

The lower level of The Land houses the Sunshine Seasons food court. Photo by Donald Fink.

My favorite has always been the tabouleh pinwheels from the Grab n' Go section. My son, Alex, swears Sunshine Seasons has the best mac and cheese anywhere, not just at Disney. The bakery also has some truly killer deserts. Try the Key Lime tart and the carrot cake cupcake for proof. My favorite thing about dining here is, you can step away from your meal and easily hop aboard the Living with the Land attraction right next door.

Sometimes referred to as, LeapFrog Fountains, this a hidden treasure located just outside of the Imagination Pavilion. On our last trip there, last summer, we killed almost a half hour there taking photos, chasing the water, getting a little cooled off on a hot summer day, and, quite simply, behaving like a bunch of little kids. Keep in mind, we're talking about teenagers and adults here. Not a little tot in sight. 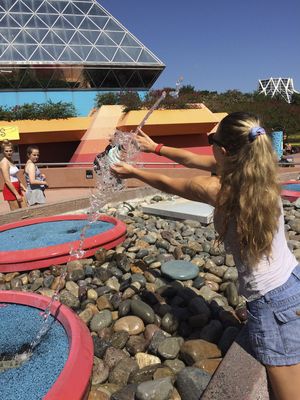 Our good friend Leanna tries to catch the jumping water outside the Imagination Pavilion in Epcot's Future World West. Photo by Chris Barry.

This is the type of unscripted piece of Disney magic that the average guest bypasses. Take your little ones there the next time you're in Future World West and you're in for a treat. The little ones are absolutely mesmerized by these fountains and as I witnessed last August, the big ones are too.

2 – The Seas With Nemo and Friends

I like everything about this pavilion to be honest. We seem to spend a lot of time in The Seas. There's plenty to do and see. One of my favorite things anywhere are the seagulls out in front. 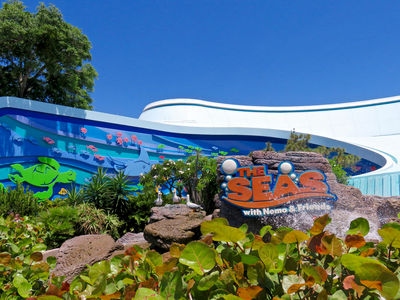 A must stop on every trip is The Seas with Nemo and Friends in Epcot's Future World West. Photo by Alan S. Dalinka.

I love the queue, with its "sand" walkways, beach grass and the school of fish projections, and that's all before you get on the ride itself. The Nemo ride is charming. The kids love it. I'm fond of it, but it's almost the weakest part of the whole pavilion for me. Turtle Talk With Crush is a must for the little ones. If you want to see your little ones have a magic moment, seat them down in front and hope that Crush singles out your child and magically speaks to him from the screen However, what I honestly like most about this pavilion are the manatees and the sea life in the aquarium. The manatees are just mesmerizing as are the dolphins, sharks, rays and schools of fish that you can see here in one of the world's largest aquariums. This is a great place to power down, escape the heat and experience some of the world's most amazing creatures.

The original Soarin' was one of the top attractions at any theme park anywhere, and the newest version is no different. I couldn't wait to finally see a new film and visit new places when Soarin' Around the World debuted in 2016.

Soarin' Around the World is as popular as ever here in Epcot's Land pavilion. Photo by Alan S. Dalinka.

People come to Disney for the magical moments. They're looking for the things that you can't do anywhere else. Soarin' has always been that type of experience. Sure, I suppose you could actually go out and hang glide. But, you won't get to do it with polar bears, orcas and elephants and you'll never get to do it over the Great Wall of China, Castle Neuschwanstein in Germany or the Eiffel Tower in Paris. Soarin' is one of the ultimate Disney attractions. It takes you to another place. It inspires you. It takes your breath away and leaves you with a wonderful feeling once it's over. It's about as good as it gets.

There's plenty more to do in Future World West. Have a great meal with amazing views of the Seas in the Coral Reef Restaurant or dine with Mickey and his buddies in the Garden Grill overlooking Living With the Land. And what about Living With the Land? It was hard to leave it off this list. We've always been big fans. If you can't get enough of the impressive Disney greenhouses, my wife and daughter highly recommend the Behind the Seeds Tour. The big lawn between the Imagination and Land pavilions is a favorite place to grab a Mickey-shaped pretzel and look for rabbits. Disney rabbits always seem happier don't they?

Future World West has a lot to offer it's visitors; three pavilions, some great places to dine and some classic attractions. It's all wrapped up in a tranquil, beautifully landscaped and "waterscaped" environment. You simply can't go wrong here. Make sure to take your time and experience all it has to offer on your next trip.

Next time, we'll head in the opposite direction to Future World East. In the meantime, click on the link below, let me hear your thoughts and Future World West favorites and I'll see you again with another Disney Top 5.