Which Summer Food Favorites Are Trending at The Disneyland Resort?

It might be a "Summer of Heroes" at Disney California Adventure Park, but for me, it's been a summer of churros … and ice cream … and donuts … and all things Groot. It seems almost every week that photos of some spectacular, scrumptious snack featured at The Disneyland Resort are popping up on social media. Since it's midway through the summer season, what better time to make a list and check it a few times to ensure I've tasted the trends?

Belly Up to the Bar

The mercury continues to rise this summer and Disney parks has plenty of liquid and iced refreshments to cool you down. My venture into Disney California Adventure (DCA) early one morning found me seeking out some of the "Summer of Heroes" beverages — specifically the Milano at The Studio Catering Co. 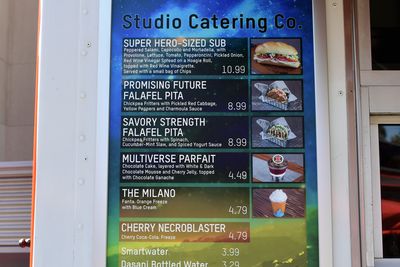 The Milano is a fizzy blend of Fanta, orange freeze, and blue creme. Photo by Lisa Stiglic.

But as I soon found out, I was a bit early in my quest for thirst-quenchers since most of locations opened at 11 a.m. I opted for Schmoozies in Hollywood Land and ordered the Infinity-ade which was a lavender-infused lemonade with a glow-cube. I found the drink tasty, but slightly overpowered by the lavender. 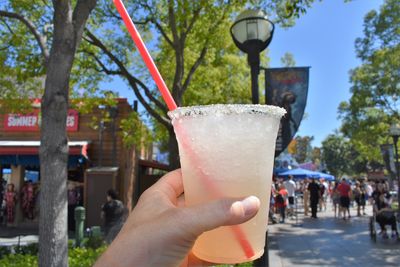 Although refreshing, this beverage is a bit on the expensive side at $7.59 for a small glass. Photo by Lisa Stiglic.

If you're craving an icy-blended drink, both parks have several options. Cars Land offers the tasty Red's Apple Freeze from Cozy Cone Motel or, if you're in Disneyland, seek out Goofy's Glaciers inside Refreshment Corner on Main Street. 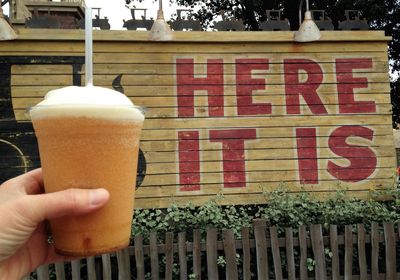 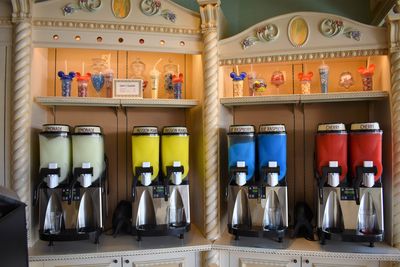 Goofy's Glaciers come in a variety of flavors. Mix and match to your desire. Photo by Lisa Stiglic.

The Savory Side of Life

With the thirst quenched now it's time for the entree. I had read a few social media posts about new Bengal Barbecue items, so I invited a friend to join me for lunch (thanks Michaelle). 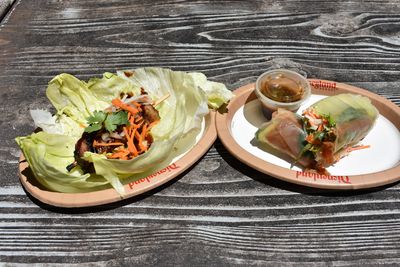 The pork belly skewer and the ahi tuna wrap have guests talking on social media. Photo by Lisa Stiglic.

My friend selected the pork belly, topped with a tasty Polynesian sauce and pickled veggie slices. She enjoyed the new dish, but noticed the veggies didn't taste pickled. I opted for the ahi tuna wrap, described as marinated ahi tuna with daikon, carrots, herbs, and jalepenos, topped with a wasabi mayo and wrapped in rice paper. I'd rate it satisfactory and a great healthy option, but the big chunk of fish could have been diced up so that each taste was the same rather than a bite of fish, then a bite of marinated veggies. Both of these new options at Bengal Barbecue are moderately priced at under $7. Annual pass discounts apply.

So I checked off the drinks and a savory selection and, according to social media, I had two frozen desserts to investigate. As I've mentioned before in my food forays, I'm not a fan of the Dole Whip, but I love mango, so off I went to Clarabelle's to inquire about the mango sorbet selection. But even seasoned guests make mistakes. I was already in Disneyland so I trekked to Toontown to Clarabelle's for my dessert. Uh no. Wrong park and wrong Clarabelle's. After a long hike back ​to DCA, I found the Mangonada at Clarabelle's Hand Scooped Ice Cream on Buena Vista Street. Two sweet, tangy scoops of mango sorbet topped with Chamoy sauce, fresh mango with a sprinkle of Tajin seasoning and lime make up this fruity, refreshing treat. The Chamoy sauce was somewhat cloyingly sweet, but overall I really liked this snack. (I'd ask for "light" on the sauce). 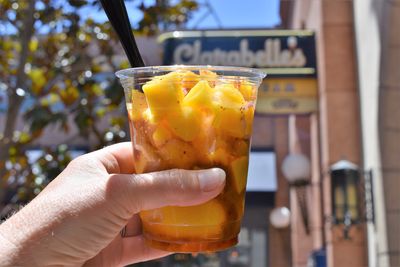 A picture perfect summer treat awaits you for $7.99. Discounts do not apply at this location. Photo by Lisa Stiglic.

Luckily for me, my Disney friends keep a watchful eye for any exciting eats that are trending, which is how I found this next colossal summer sweet — the Fruity Pebbles churro ice cream sandwich (thanks Eric). Found at both California Churro Cart locations in Downtown Disney, this dinosaur of a mash-up is enough for two to three people, so I highly recommend you share this beast. Not only is it gigantic, but it is sweet. The churro portion is warm when handed to you and the ice cream center comes in its own container, so you assemble the sandwich yourself. Splitting this delight will also save you some money, as it's priced at $10 — no discounts apply. 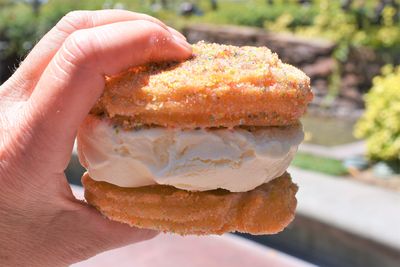 A mixture of sugar and Fruity Pebbles cover the churro portion of the sandwich. Grab plenty of napkins for this goody. Photo by Lisa Stiglic.

Not Just for Breakfast Anymore

The Fruit Pebbles topping apparently is the trend at The Disneyland Resort because not only can you get it on the aforementioned churro ice cream sandwich, but also topped on delicious doughnuts in Disneyland. Located in the Hub at the pastry cart, Disneyland doughnuts are available first thing in the morning and again at 6 p.m. The varieties rotate weekly beginning Fridays. If cereal isn't your favorite topping, other options include candy varieties or an in-house creation mash-up of the Matterhorn macaron and a sugar doughnut.

Not to be outdone, DCA has a Hulk-sized doughnut for pastry patrons. 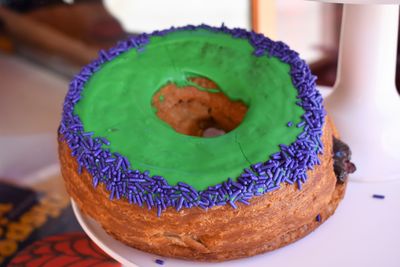 This black-berry currant-filled sweet is located at Schmoozies for a pricey $8.99. Photo by Lisa Stiglic.

And for fans of the not-so-sweet, Schmoozies offers a maple-creme filled pastry topped with the savory saltiness of bacon.

In Groot We Trust

Mickey might be the icon at Disneyland, but this summer DCA has a new kid in town and his name is Groot. This breakout star has his own meet-n-greet, souvenirs, and of course, his own food. I am Groot, indeed. 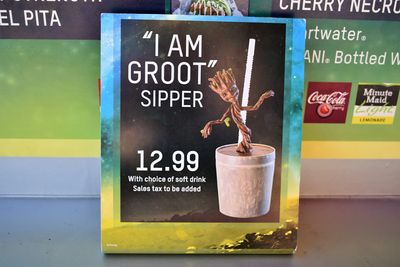 Groot sipper cups are available in Hollywood Land backlot and near the Guardians of the Galaxy: Mission Breakout! attraction. Photo by Lisa Stiglic. 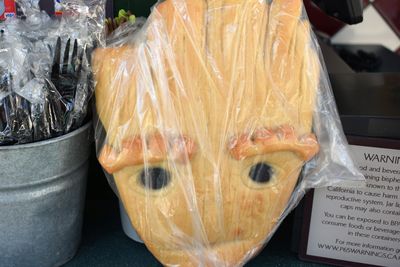 "I am Groot" sourdough bread heads are at Fairfax Market in Hollywood Land. Photo by Lisa Stiglic.

Complete with olive eyes, Groot bread heads are also available in a jalepeno-cheddar cheese variety. Good luck getting Groot home without eating him.

So that completes my list of Disney summer treats trending on social media, but, as usual, trends come and go—so hurry to Disneyland Resort for your favorite because the next big thing is ready to hit. In fact, while writing this article, a new favorite has emerged: beer floats at Clarabelle's Hand Scooped Ice Cream in DCA announced by Disneyland Today. I'll report back soon.

Happy summer (and happy eating) at the Disneyland Resort.