One of the first hotels to open on Walt Disney World property was Disney's Contemporary Resort. This hotel opened in the fall of 1971 along with only one other hotel on the property for that year. Its construction was innovative for the time, designed with the assistance of US Steel. The shell of the building was erected while the rooms were constructed off site. The rooms were then trucked to the hotel and slid into place with a crane, much the same way large cruise ships are constructed today. US Steel called the construction design revolutionary.

The Contemporary Resort Hotel, with the new Bay lake Towers to the right, offers a luxury stay for guests and Disney Vacation Club members along the shore of Bay Lake. Just a short walk from the Magic Kingdom, this hotel was one of the first built at Walt Disney World Resort, opening for guests on October 1, 1971. Photo by Donald Fink.

Eating At The Contemporary Resort 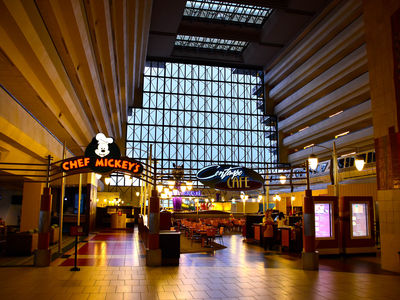 Much of the activities at the Disney's Contemporary Resort are located in the Grand Canyon Concourse, which is the large open area inside the hotel on the third floor. The quick service restaurant, Contempo, is located here as well as the popular character restaurant, Chef Mickey's. There are also stores for shopping for everything you might need while staying here, and for the souvenirs you'll want to take home to friends. Photo by Donald Fink. 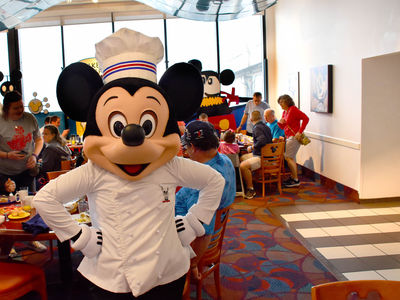 Chef Mickey finds time to make the rounds and greet guests during their meal. Photo by Donald Fink. 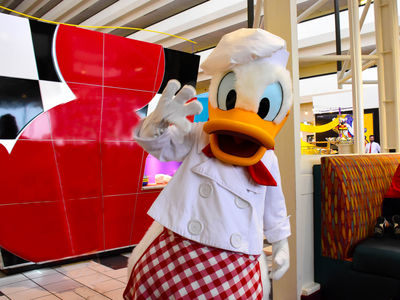 Donald Duck turned 80 years old this year, but still finds time and energy to help Mickey in the kitchen and greet guests at Chef Mickey's. Did you know that Finnish voters who wish to protest their political choices on the ballot often write in Donald Duck's name as their choice? We wonder if he's ever been elected. Photo by Donald Fink. 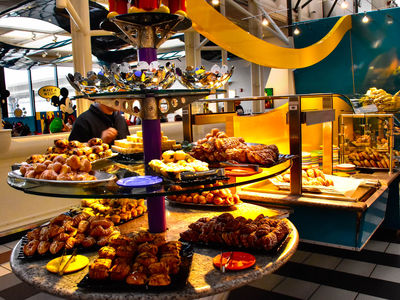 At Chef Mickey's, you can find a large assortment of breakfast pastries, at breakfast, of course. Photo by Bonnie Fink. 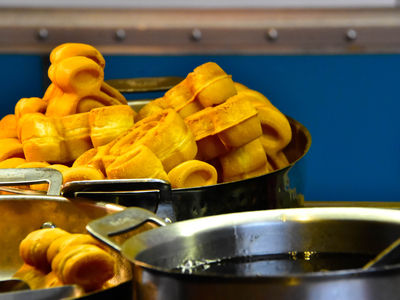 The Mickey waffles are great. They're not quite Belgian waffles, but they're done in the Belgian style and the flavor is a little sweeter than the normal garden variety waffle. Photo by Bonnie Fink. 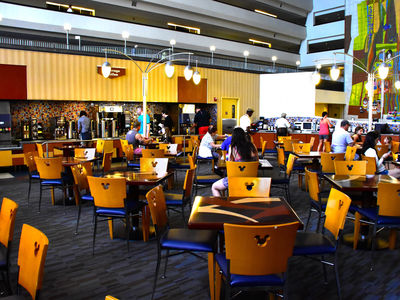 The Contempo is the quick service restaurant at Disney's Contemporary Resort. Like Chef Mickey's, it's located on the third floor in Grand Canyon Concourse. The food is similar to many of the other quick service restaurants found at resort hotels on property. One of our favorite breakfasts, for example, is the Bounty Platter and Mickey Shaped Waffles, just like those found at Port Orleans or Disney's Caribbean Beach Resort. Photo by Bonnie Fink. 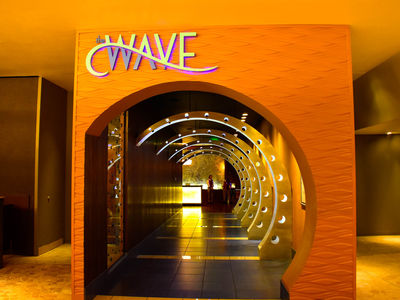 The Wave is a table service restaurant at Disney's Contemporary Resort. It's located on the ground floor in the lobby, just to the right of the check-in counter. Photo by Donald Fink. 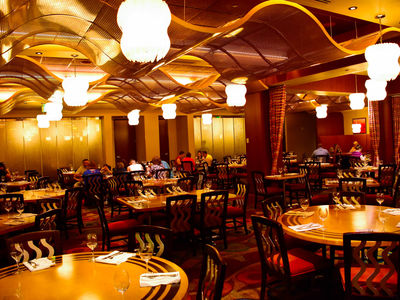 The Wave is a moderate table service restaurant by Disney standards. It serves breakfast, lunch, and dinner. The cuisine is American with dishes like Braised Short Rib, Roasted Chicken, and usually a sustainable fish. Photo by Donald Fink.

Our information tells us that the menu at The Wave changes about four times during the year. This is somewhat unusual for a "moderate" table service restaurant at Disney, but necessary because of their emphasis on sustainable choices, another unique choice for a moderate restaurant.

You can see a menu from The Wave here. We've eaten here, but it was several years ago. Our memory of the experience is favorable and we will probably visit this restaurant again. There's just so many choices on property that it's difficult to repeat a restaurant with so many other tempting options. 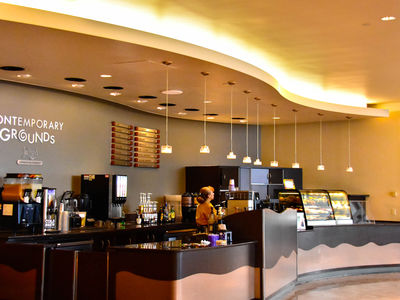 Coffee and coffee like drinks are available at Contemporary Grounds, located in the main lobby. Photo by Bonnie Fink.

You may notice that images of the California Grill are conspicuously absent from this Photo Tour. It's not that we didn't want to include this famous restaurant, but rather, that it simply wasn't open or available both times we were at the hotel shooting for this story. Entrance for the California Grill is from the second floor at a check-in desk. After checking in, guests are escorted via elevator up to the fifteenth floor. It's on our list for dinner one day simply because of the view it has to offer for the Magic Kingdom fireworks. Of course, reservations for that time are most likely at a premium. There's also a dress code for entering this establishment, but it's not quite like formal night on the Queen Mary 2 during an Atlantic crossing. Instead of cut-offs, they draw the line by allowing "dress shorts." 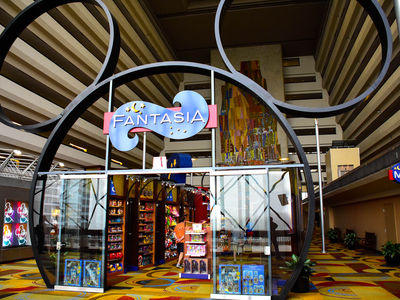 Most of the shopping at the Contemporary Resort Hotel takes place in the Grand Canyon Concourse on the third floor, in one of several small shops. Here, center stage, is Fantasia. This gift shop contains everything you might need to remember your visit to Walt Disney World. Photo by Donald Fink. 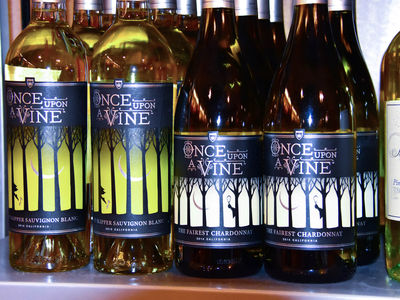 Not being wine drinkers, we thought this label, with its catchy name, must be something Disney has done to amuse its guests. Turns out that it's an actual wine with a real following. Who knew that Disney wasn't the only company with a catchy name department? Photo by Bonnie Fink. 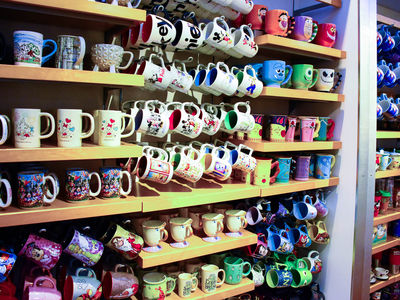 Has anyone besides us noticed that souvenir coffee cups have grown in size to the point that they're pretty much useless as an actual cup to hold coffee? Who really needs that much caffeine? And how do you keep it warm? But if you want a cup to take home and display on the shelf with all your other giant cups, they're here in the Fantasia Market. Photo by Donald Fink.

We're making fun of the giant coffee cups in the Fantasia Market, but this is where you can pick up any snack items or minor groceries you might need for your room while you're here. It's located in the northwest corner of the Grand Canyon Concourse, just across from the walkway to Bay Lake Tower. 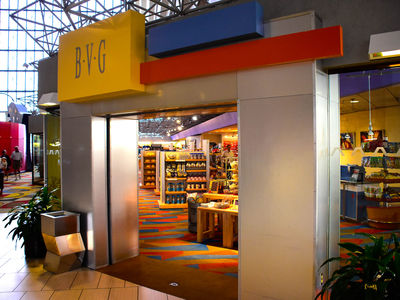 Bayview Gifts is another merchandise outlet on the third floor of the Disney's Contemporary Resort. They seem to have a little higher range of items. Certainly worth a stop to see what's there. Photo by Donald Fink. 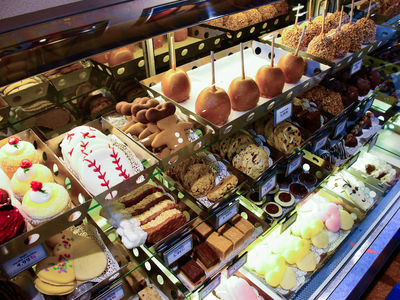 A welcomed addition to BVG is this dessert counter. Photo by Donald Fink. 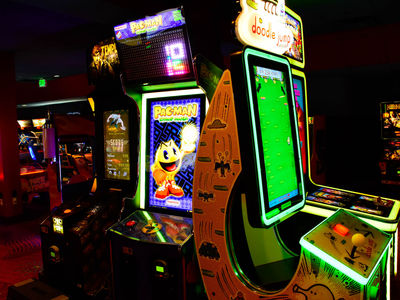 The Gaming Station is the video arcade at the Contemporary. We've seen more elaborate and larger arcades in other Disney hotels, usually in the moderate priced facilities. Still, this one was reasonably well equipped. Photo by Donald Fink.

Transportation to and from Disney's Contemporary Resort is as good as it is at any other Disney resort on property. There are busses to all the parks and Disney Springs, boats to various places around Bay Lake and Seven seas Lagoon, and of course, there's monorail service from within the hotel, from the Grand Canyon Concourse. 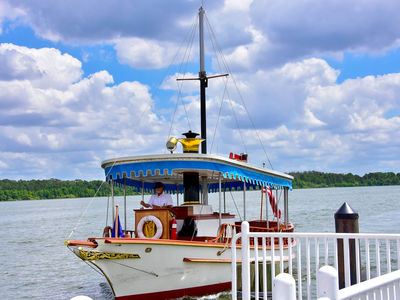 Boat service is available at the Contemporary Resort Hotel. This boat, the Blue Launch—as evidenced by the blue flag on its bow—makes stops at Disney's Contemporary Resort, Disney's Fort Wilderness, and Disney's Wilderness Lodge, useful if you're having lunch at Whispering Canyon or taking in a dinner show at Hoop-Dee-Doo Musical Revue. Photo by Donald Fink. 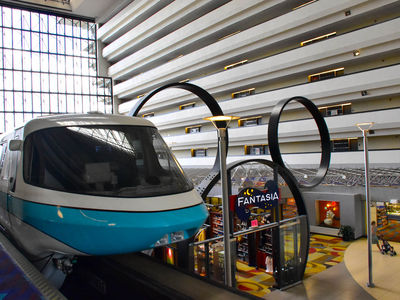 Disney's Contemporary Resort is the hotel on Disney property where the monorail comes into the actual building. Guests can travel to the Magic Kingdom, other hotels around Seven Seas Lagoon, and with a quick change at the Transportation and Ticket Center, you're on your way to Epcot. Photo by Bonnie Fink 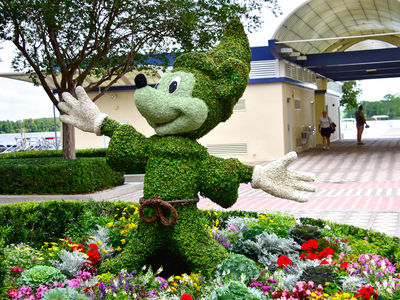 Outside, the activities are centered around the pools and Bay Lake. Here, a topiary of Sorcerer's Apprentice Mickey decorates the grounds. Photo by Bonnie Fink.

There are advantages to staying at a hotel that has access to such a large body of water on Disney property. Bay Lake is one of two lakes in the area of the Magic Kingdom. It is connected to the artificially made Seven Seas Lagoon by a water bridge that travels over a road. It's one of only a few places we know of where boats routinely cross over cars, busses, and trucks as they go about their business.

The marina at Disney's Contemporary Resort has several activities that can certainly entertain pretty much anyone. There are small boat rentals that guests can pilot themselves around both lakes with a two-person outboard. Another activity is water skiing, or parasailing. If the fishermen in your family can't miss an opportunity to get out on a Florida fresh water lake and catch some bass, there are bass fishing trips available too. Or, you can just laze around the pool. 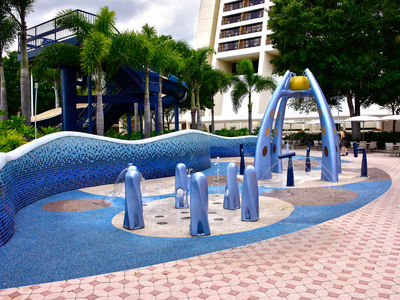 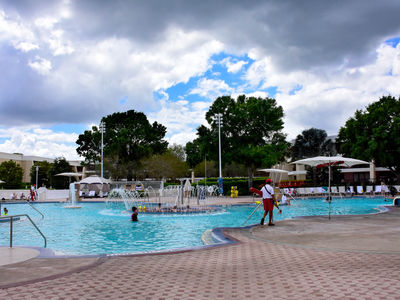 The main pool at Disney's Contemporary Resort is pleasant, but not as heavily themed as other Disney pools on property. Photo by Donald Fink. 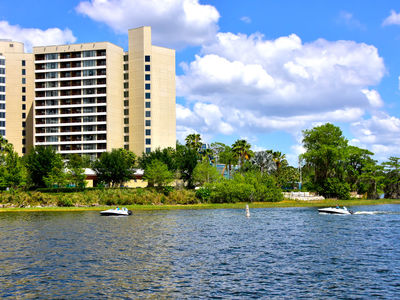 Personal watercraft are available for rent at Disney's Contemporary Resort Hotel. These little boats hold two people and are powered by small, 9.9hp Mercury engines. They're not fast, but they'll get you around the lake for a look. That's Bay Lake Tower in the background. Photo by Bonnie Fink. 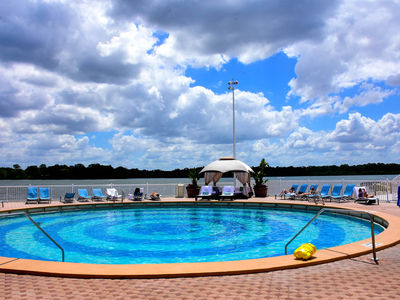 A smaller, quieter pool for adults only is located just away from the main pool. It offers good sun bathing and a view of activities on Bay Lake. Photo by Donald Fink. 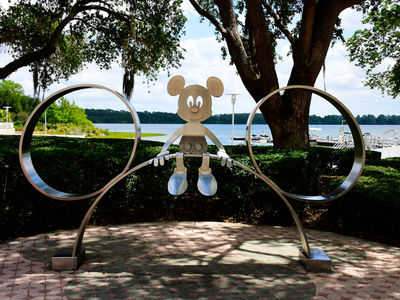 This structure appears to be a photo op. At least, that's what folks were using it for, so we took its picture too. Photo by Donald Fink.

It's not appropriate to present a story about the Contemporary Resort Hotel without mentioning one of the most influential female artists in the history of the Walt Disney company, and probably the history of art.

Mary Blair, a modernist artist, is the designer of the murals in the Grand Canyon Concourse in the Contemporary Hotel. One of her murals reaches over 90 feet high. They all feature a modernist impression of southwest scenes, including Native American children, goats, and overall scenes from the American Southwest.

Ms. Blair, originally from McAllister, Oklahoma, went to work for Walt in 1940, and quickly became a driving force to much of the art and animation that made Disney what it is. She worked on films like Peter Pan, Alice in Wonderland, Cinderella, The Adventures of Ichabod and Mr. Toad, and The Three Caballeros. She also designed the concept art for "it's a small world," and maybe just to show that she wasn't a one trick pony, she wrote for Walt Disney's Wonderful World of Color and Once Upon a Wintertime.

Google recognized Mary Blair on her 100th birthday on October 21, 2011 with a Google Doodle. Although she died in 1978, she was awarded a Disney Legend Award in 1991 and received a Windsor McCay award from ASIFA-Hollywood in 1996. She is one of very, very few women to receive this award since its beginning in 1972, and shares the list with other notables like Steven Spielberg (2013) and Tim Burton (2009).

We've never stayed at Disney's Contemporary Resort, but we've spent time here shooting for this Photo Tour, and we've also had occasion to be here while friends stayed in Bay Lake Tower as Disney Vacation Club members. We've interacted with cast members on several visits, and always found the service and friendliness of everyone we've spoken with to be exceptional.

Why haven't we stayed here? It's like Disney restaurants. There are so many great choices that it simply hasn't made its way to the top of our list, yet. We think that someone who wants a treat to a higher level of quality, or maybe wants closer proximity to the Magic Kingdom—possibly even a room where you can step out on a balcony and watch the fireworks—should give this hotel serious consideration. It may take a bit more saving to make it happen, but we think it will be worth the effort.