Timing, as they say, is everything. A perfect example of this old adage occurred two weeks ago. As I sat down to write the next installment in my series about the best of Epcot, there was an eruption of Epcot news coming out of D23 Expo 2017 in Anaheim. More specifically, I was about to start crafting the final piece of my Future World Trilogy—The Best of Future World East—when, lo and behold, big news came out pertaining to, you guessed it, Future World East. I found myself sidetracked from my exploration of the first half of Epcot and last time I was compelled to focus on what I thought were the best of all of the many D23 Expo Walt Disney World announcements.

I think it's always a great time to be a Disney fan, but it looks like the next four years leading up to Walt Disney World's 50th anniversary are going to be enthusiastically magical. A lot of that magic is going to be happening in Epcot, and a significant portion of the magic announced so far is going to be happening in Future World East. This writer and Epcot aficionado couldn't be happier about that. I've long thought that this half of Future World has been in need of some attention and it looks like I wasn't alone in that thought.

Whenever I enter Future World East I realize how little time I actually spend in this corner of the park. Despite having two of Disney's all-time best attractions, I'm just not in this section of the park all that much. The reason for that is simple and it's one of the reasons I'm so excited for two of the big announcements from D23: Quite frankly, there's just not that much back here. Let's make a comparison to its sister on the other side of the world, Future World West. As far as dining options, there are two excellent sit-down restaurants, Coral Reef in The Seas pavilion and The Garden Grill in The Land. The Land pavilion also has one of the Disney's best food courts, Sunshine Seasons. This will soon change with the announcement of the space themed restaurant, but currently there are no dining options in Future World East. I suppose, one can count The Electric Umbrella located in the Innoventions building, but I place that in Future World Central. The only thing to really eat in Future World East is ice cream.

As far as the lay of the land goes, Future World West has its eastern counterpart beat. I'm a tremendous fan of the trees, landscaping, and ponds that surround the Seas, Land, and Imagination pavilions. As I said in my West article, it's one of my favorite places to walk around in Epcot. East does have some beautiful flower beds and lawns, but it lacks the same cohesive landscaped feel and tranquility that the western side has.

I don't want to spend too much time bashing Future World East. After all, it has two of Disney's best attractions and pavilions. And it looks like greater things are on the horizon—classic Epcot reference fully intended. So let's plow on through to the final piece of my Future World excursion and take a look at the Top 5 things to see in Future World East.

5 – The Festival Center (formerly The Wonders of Life pavilion)

This is an unusual and unique thing that you can do a few times each year in Epcot. An essentially shuttered pavilion is re-opened for use as a festival center for Epcot's Food and Wine and Flower and Garden festivals. Even if you're not a foodie or you don't have a green thumb, if you're there during these festivals take a trip into the Festival Center and see what used to be. 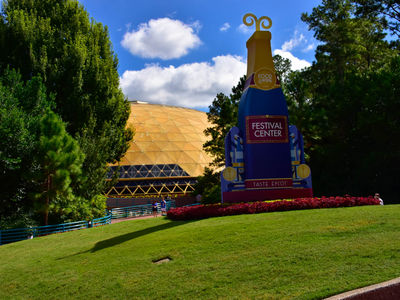 The Festival Center gets dressed up for the Epcot International Food and Wine Festival. Photo by Bonnie Fink.

It's an impressive structure, and I hope that there's more to come for this pavilion. It was alluded to at the D23 Expo that the announcements made were only the beginning for what lies ahead for Epcot. This pavilion is a massive piece of real estate that can and should be turned into something more than an occasional festival center. Make a point of checking it out the next time you're rushing over to Mission: SPACE and Test Track. It's a piece of Disney history. 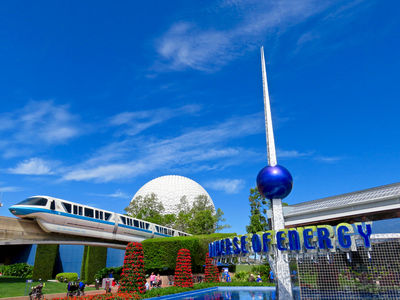 As we go to press on this article on August 4, the Universe of Energy pavilion literally has its days numbered. The building and the attraction within are scheduled to close on August 13, a mere nine days from now. I am thrilled to welcome the Guardians of the Galaxy to Future World East. I'm a huge fan and can't wait for a breath of fresh life into this corner of the park. Ellen did have its highlights though, including a unique ride system, a roof full of solar panels that purportedly helps power the attraction inside, the wonderful trip through the age of the dinosaurs, and the chest shaking Big Bang. It's a very cool looking structure. See it while you can.

I'm including this as a separate entry all its own because I think it's an incredibly overlooked gem of Epcot. The Advanced Training Lab is the post show of Mission: SPACE. 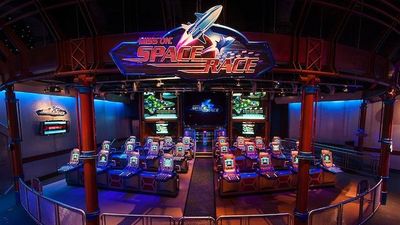 Get ready to be trained in the Advanced Training Lab. Photo ©Disney

After your return to Earth and before you enter the ubiquitous gift shop, there's a plethora of space themed activities to spend some time on. Most people don't realize that the Lab can be accessed by walking in through the Mission: SPACE Cargo Bay gift shop. You don't have to go on the attraction at all if you don't want to. Take my family for example. I'm the only one of five that thoroughly enjoys Mission: SPACE.

I spent several excursions to Mars by myself until we realized that everyone can wait for me in the Advanced Training Lab and have their own space type fun. The little ones can climb through the Space Base playground while they wait for you to land and then you can all have a blast with Mission: SPACE Race and Expedition Mars. Don't forget to send some digital postcards to your friends back on Earth. It's a great looking room and an awesome air-conditioning break in the summer.

I think the only thing more polarizing than Mission: SPACE at Disney is the "it's a small world" theme song. I am a proud fan of the song that you can never forget, and I'm a big fan of Mission: SPACE as well. In my personal opinion, people should try and forget the negative history of this incredible attraction and give it a shot. The addition of the non-spinning Green mission truly made this a ride for everyone. 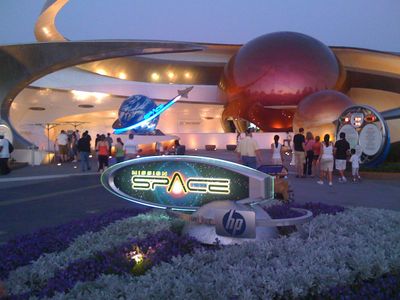 Mission: SPACE is one of the coolest looking structures in all of Walt Disney World. Photo by J. Jeff Kober.

The queue is one of Disney's best and shouldn't be missed by anyone. If you can handle the spinning Orange mission—yes, it's as intense as you've heard—then you're in for an unforgettable ride. This is one the best things that Disney has ever done. There's nothing else like it. I like to experience both the Green and the Orange missions and I'm looking forward to a new mission film when the attraction reopens later this summer.

I was a big fan of this attraction during its original iteration. I like the newer version even more. The whole addition of designing your car as you wait was a stroke of genius; it's an amazing use of downtime. The effects inside are excellent and the lightning-fast lap around the outdoor track speaks for itself. I've gone faster in my own car, but it's never been this much fun. 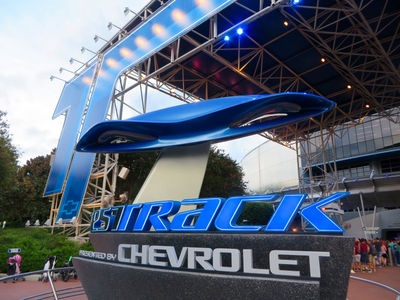 Test Track in Epcot's Future World East is as popular now as it was when it first opened. Photo by Alan S. Dalinka.

The post show experience is a ton of fun as well. Who doesn't like sitting in cars they can't afford like the Corvette? Test Track is one of Disney's ultimate attractions, completely unique to them and always a crowd pleaser. I don't know anyone that doesn't like this experience, and that's why it's a solid number one for Future World East.

Usually, with my Top 5 lists, I'm lamenting the omissions. There are inevitably things I've left out. The big difference is, at least for the time being, this is pretty much everything in Future World East. With the additions of the upcoming space themed restaurant and a Guardians of the Galaxy takeover of the Universe of Energy, this side of Future World is going to be a much bigger pull for me. Mission: SPACE and Test Track are always a must do for me, but as I said above, I don't spend a lot of time in this section of Future World. I anticipate that will change in the future and I'm looking forward to it in a big way. I'll have a whole other section of Epcot that I can spend time in. I can't ask for much more than that.

That finishes up Future World for this series. It's time to move onto the countries of World Showcase on our journey through Epcot. Before we embark on that adventure, click on the link below and let me know your thoughts on Future World East and I'll see you next time with another Disney Top 5.